One of Hollywood's most successful actors and a seven-time Academy Award nominee, Jeff Bridges garnered his first Oscar for Best Performance by an Actor in a Leading Role for his performance in Crazy Heart–as Bad Blake, a down-on-his-luck, alcoholic country music singer. Since earning his initial Oscar nomination in 1971 for The Last Picture Show, he has been honored with seven nominations, most recently for Hell or High Water (2016). In a career spanning nearly 50 years, he has appeared in more than 65 films, among them Seabiscuit, The Big Lebowski, True Grit, The Fabulous Baker Boys, Starman, and most recently Bad Times at the El Royale. Through his company, ASIS Productions, he has also produced films and television movies, including the documentary Living in the Future's Pasts as well as The Giver, American Heart, The Only Living Boy in New York, and Hidden in America. Photography and music are two of his passions. Bridges' photographs have been featured in Premiere and Aperture, as well as in gallery exhibitions in New York (at the George Eastman House), Los Angeles, London, Italy, and the Museum of Photographic Arts in San Diego. In 2013, Jeff received an Infinity Award from the International Center of Photography. In February 2015, Jeff released a spoken word/ambient album titled Sleeping Tapes. The collaboration was co-produced with musician Keefus Ciancia who also supplied the music. The album was released by web hosting service Squarespace as part of its Super Bowl advertising campaign, with all proceeds from the album sales going to charity. 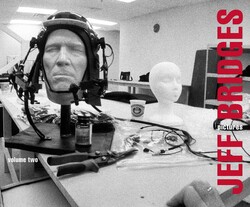