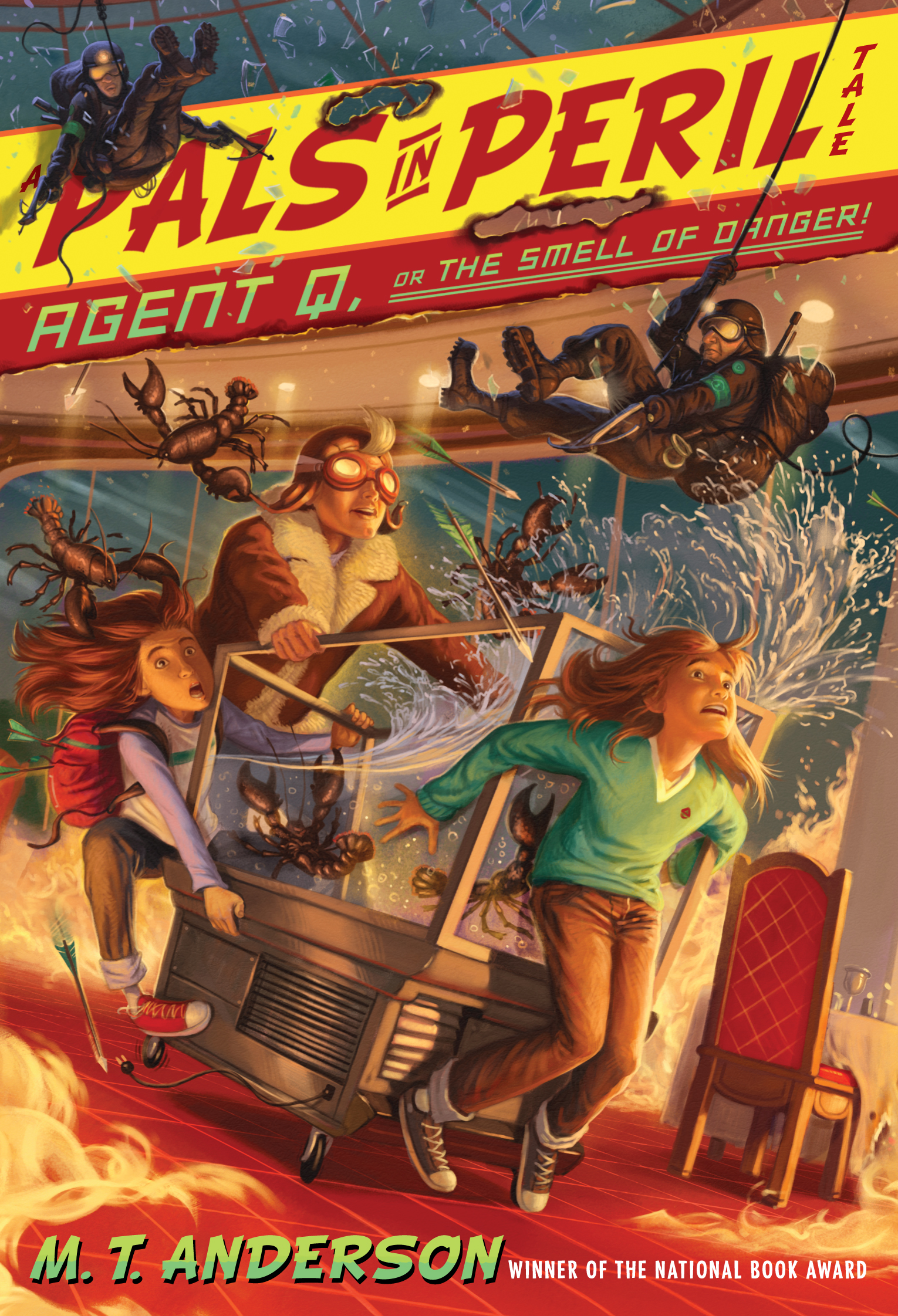 Agent Q, or The Smell of Danger!

In the zany and humorous fourth book of National Book Award winner M.T. Anderson’s Pals in Peril series, Jasper Dash and his friends must escape the clutches of The Awful Autarch!

Having mopped up their last crime-fighting caper, our three heroes—Lily Gefelty, Katie Mulligan, and Jasper Dash, Boy Technonaut—are eager to get home. But the secret police in the war-torn realm of fantasy where the three kids are trapped (the state of Delaware) don’t want them going anywhere. Our dynamic trio knows way too much about the whereabouts of certain fabulous treasures to escape the grip of Delaware’s Ministry of Silence. So, chums, it’s a race to the border of New Jersey against spies and government agents and double-crossers...That is, if our heroes make it home alive!

Chock full of ups, downs, twists, turns, a shark pit. and even a band of sentient lobsters fighting on the side of Good, this fourth installment of the Pals in Peril series is every bit as wild, wacky, and wonderfully outrageous as the first three.

They came from the heights of the mountain, a long procession winding their way between the cracks and steeples of stone. The peak was hidden in fog. Through the ravines and over the hunched backs of granite the men padded, barefoot, all in a line, one after another, silent in the morning. They walked through the high, barren places where the ancient wind had licked the limestone into pillars and pits, caves and crevasses. There were two hundred boys and men, all dressed in flowing robes of green; and each one carried a small piece of a dismantled white van.

They marched through hollows carved by howling storms and mazes formed by no human hand. The largest men carried the van’s white doors, their heads sticking through the open windows, or they hefted a roof-panel between them. Others carried the exhaust pipe, the dashboard, the brake pads. The littlest boys—six or seven years old—carried single bolts cupped in their hands. The procession was led by two silent youths, frowning, walking side by side, both cradling the headlights in their arms. The line of them wandered through the bitter karst.

They were the monks of Vbngoom, called the Platter of Heaven, the most powerful monastery in the whole State of Delaware. They filed along dinosaur curves and great stone mounds.

Only three of the people in this solemn parade of broke-down van did not wear green robes and did not have their heads shaved.

Lily Gefelty, a slightly stocky girl whose bangs flapped down in her face or blew backward in a burst, depending on the wavering breeze, carried the crankshaft timing gear. Her eyes—when they appeared through her hair—were bright, and she greeted each new vista with mute delight. She loved the mountain above them and the green forests down below. She loved that she was here with friends, and that they were on their way home after a satisfying adventure. She was very ready for home.

Katie Mulligan, behind him, wore the van’s fan belt around her neck. She was used to adventure too, because she starred in a series called Horror Hollow, in which she unwound mummies, taught werewolves to heel, and heavily salted leech invasions. Under other circumstances, she would have been grumpy about yet another adventure—she was getting tired of being bitten, stomped, and slimed—but on this particular day, she was in an extremely good mood, because right behind her walked Drgnan Pghlik, a young monk of Vbngoom who had agreed to go to the school dance with her.

It is unusual for monks to go to school dances—usually they spend their free time chanting in Latin, speaking in riddles, drawing cherubs in old books, and slapping themselves with stinging nettles—but Drgnan was a very unusual monk. For one thing, he was being trained as one of his monastery’s Protectors and taught martial arts so that he could rove around the country, doing good and making sure that no pirate or plunderer threatened his sacred order and their secrets.

The monks climbed down the mountain. They were leaving their home. Or, to be more precise, their home was leaving them.

They all gathered to rest on a little plateau with pillars of limestone like a fallen palace of wax. Lily sat down and took out her water bottle. She unscrewed the lid and took a deep swig. She watched the monks carefully. She could tell something was going to happen, but she didn’t know what.

She knew that it was time for a few of the monks to leave their home so that they could go out into the world—across the forbidden border of Delaware—to collect those sculptures and gold-bound manuscripts that had recently been stolen by gangsters.* The monks would give Lily, Katie, and Jasper a ride home to Pelt, their town.

Hence the procession and the auto parts. The monks had dismantled the gangsters’ white van. There was no road on this side of the mountain. They were carrying the van down the mountain to reassemble it near a road. Then Katie, Jasper, Lily, and Drgnan would drive with a few of the senior monks toward the border of Delaware. They would make their way to Pelt and reclaim the artifacts illegally sold to the Pelt Museum.

But Lily didn’t understand what the rest of the holy men were doing there, or why they seemed so sad.

One of the most revered of the monks, a forty-year-old man with a clever face and an uneven grin, came over to her and her friends. His name was Grzo, and he was in charge of the Scriptorium, the room where manuscripts were copied by the monks. Usually, he spent all his days there, in a hall silent but for the squeak of quill pens and the laser-y mouth-sounds of young monks drawing angelic wars.

Brother Grzo pointed up the slope, to where the monastery could still be seen through the thinning haze. He said to Drgnan, “Look up the mountain. There you see Vbngoom upon the top of Mount Tlmp for the last time.”

Drgnan nodded. Lily, Jasper, and Katie looked confused and surprised. Brother Grzo explained, “Do not fear, children. You may someday see our home again, but not in this place. For two hundred years, Vbngoom has sat among the Four Peaks. It has moved among the mountains in the fog, shuffled like a pea among four nutshells to fool those who would seize upon our treasures and our sacred flames. But now that the gangsters of the World-Wide Lootery are in the hands of the government authorities, there is too much danger that we shall be found. Too many people know where our monastery is hidden. Too many roads lead to our mountaintop. Too many Delaware spies have asked too many questions. No longer can the monastery of Vbngoom hide in the clouds atop the Four Peaks. No longer is a jungle filled with kangaroo-riding cannibals and lisping serpent-men enough protection. Vbngoom must move farther away. Go and sit while we pray.”

Katie, Lily, and Jasper crawled up into a small nook worn into the stone. Katie passed out sandwiches. They ate. They looked up at the towers and walls of the place they had grown to love. They watched the monks form a great circle. Some stood on rough pedestals. Out of backpacks they drew pipes and rings that they fitted together to make horns and trumpets. A few trumpeters stood aloof on pillars, awaiting a signal.

An age was coming to an end.

The abbot of the monastery, an ancient man who walked on wooden crutches, began whispering a prayer. The others joined in, each in his own time. The plateau murmured, muttered. For a long time, this went on. An hour passed. The sun moved in the sky. The shadows on the monastery walls fell crooked, then straight. The pine trees around its base wriggled in the midday sun.

And all at once, the whispering stopped—the horns came up—a great, triumphant chord echoed through the mountains, blasting away at the mirage of what was.

In the silence that followed, Lily’s ears rang. No monk spoke. The abbot shuffled out to the middle of the ring of monks. He looked up at his home. He raised his palm and lay it beneath his lips. And he blew.

That tiny breath traveled up the mountain-side—hit the pine trees like a gale—and the monastery began to unravel as if it was made of dry sand. Away flew a turret—and now walls were sifting off in clouds, blowing through the sky, brilliant, glittering—all of it—the trees on the peak, the volcanic crater, the cloisters, the bridges, the chapels, the banners—all of it swarmed through the air, locustlike, and tumbled off to the north.

Vbngoom migrated through the sky.

Lily cried at it shimmering in the noonday light.

Then there was no more monastery there—in fact, no more peak. Suddenly the monks were only a quarter mile from the top.

The kids were sad that Vbngoom could no longer stay atop Mount Tlmp, but glad it would be safe elsewhere.

Drgnan came to their side, wiping his eyes. The musicians were unscrewing their trumpets and dismantling their pipes and stowing them in backpacks. The rest said quick prayers and picked up their automotive parts.

Then the procession set off again, holding high their tappets, their clutch, their shocks.

* As lovingly described in the previous volume, Jasper Dash and the Flame-Pits of Delaware. 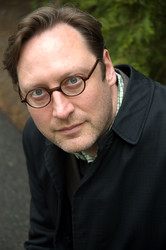 M.T. Anderson is the author of the Pals in Peril series; The Astonishing Life of Octavian Nothing, Traitor to the Nation series, the first volume of which won the National Book Award; The Norumbegan Quartet; Burger Wuss; Thirsty; and Feed, which was a finalist for the National Book Award, a Boston Globe–Horn Honor Book, and the winner of the Los Angeles Times Book Award for Young Adults. He lives in Boston, Massachusetts. Visit him at MT-Anderson.com.

Kurt Cyrus has illustrated numerous acclaimed picture books celebrating the natural world, including What in the World?: Numbers in Nature by Nancy Raines Day; Mammoths on the Move by Lisa Wheeler; and his own Tadpole Rex and The Voyage of Turtle Rex. His art also appears in the middle grade series Pals in Peril by M.T. Anderson. Kurt lives with his wife in McMinnville, Oregon. Visit him at KurtCyrus.com.

* "In Anderson’s droll send-up of the spy genre...among the energetic chase sequences, diverting authorial interjections, and appropriately quirky illustrations is a quiet message about the importance of home, however “normal” it may be."--Booklist, starred review

"Anderson turns his characteristic witty parody toward the spy genre and teen angst in this entry. From sentient lobsters to ironic monks, there are quirks here aplenty, and they’re worthy successors to the weird elements of the previous titles..the voice will likely keep readers entertained; when the adventure gets going, it is indeed rollicking, and it matches its predecessors in both breathless pacing and general silliness. Snarky authorial asides complete the picture, and the requisite happy ending will no doubt please readers familiar with the series."--The Bulletin of the Center for Children's Books

Agent Q, or The Smell of Danger!