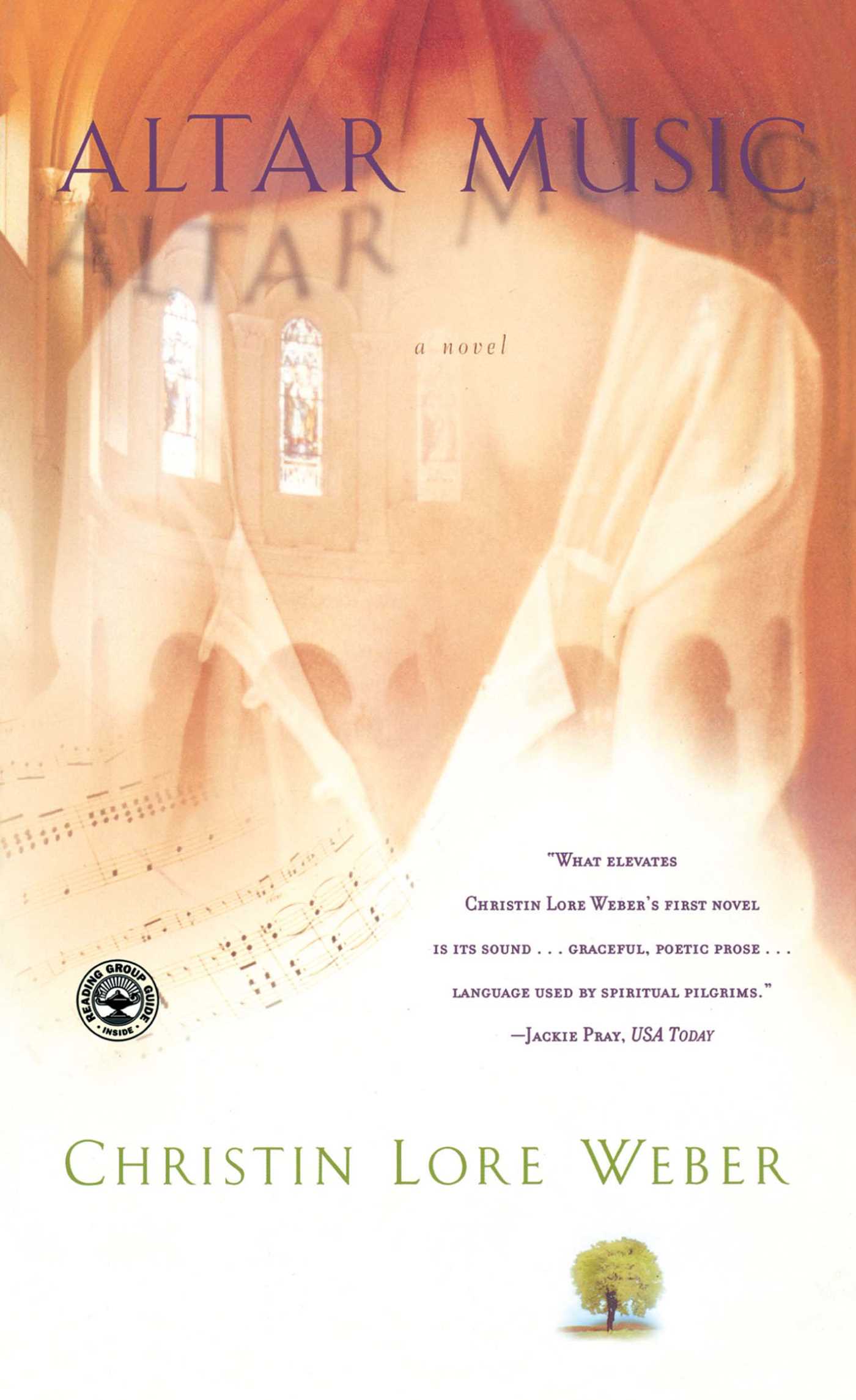 Enter a Mysterious, Cloistered World Full of Passion and Regret, Where the Lines Between the Sexual, Artistic, and Religious Become Blurred.
This achingly beautiful and revelatory first novel is the story of three generations of strong-willed women and their battles to balance personal longings with the disciplines of their church: Meghan, who dismisses the priest's injunctions about sex until tragedy befalls her family; Kate, who so fears God's power to destroy that she shuts herself off from emotion completely; and, finally, Elise, whose connection to unknowable forces drives her into the most exhilarating, disillusioning, and haunting experience of her life.
Written with lyricism and emotional authenticity, Altar Music is a portrait of a nun as a young girl, an epic tale of a family both defined and divided by its religious beliefs, and a powerful story about mothers and daughters.

Once music touches your soul

you never can be free of it.

It will haunt you

Each morning the road to the inn was littered with carcasses of frogs. Elise crouched on her haunches like Grampa Pearson and examined one of the flattened creatures. Leathery brown, a pancake frog. Not real. Real frogs, green, covered with slime, hid in the tall grass by the old houseboat. If you scuffed along, they jumped and landed with a thud in the shallow water by the reed bed. Some were big as chipmunks. Those could not be caught with hands, only with a pail turned upside down. The small ones could be caught with hands and stored in the pockets of her overalls. She named them and tied little scraps of colored material around their necks. Their feet on her hand were delicate as those of baby birds fallen from the nest.

Elise gazed into the lake from where she sat in a hollow of the giant cottonwood tree that stood in the inn yard. Its branches dipped low, all the way to the water's edge, where twig fingers drew circles on the surface. When she looked up and into the distance, she could see Rainbow Island and Deep Water Gap. Surrounded by leaves, she hid from the sharp voice of her mother. Here she dreamed. She whispered to herself and rocked back and forth while her imagination took her into things. All she had to do was look hard, at the twig, for instance, as it twirled in the water. Suddenly she could feel her fingers becoming wood and the water parting at her touch. She practiced going into the chipmunk that chattered on the branch above her, into the gull that floated over the waves. In dreams she searched for a mother whose voice would be a lullaby, like water crooning to rocks along the shore.

Dreams set her afloat in waters dark and infinite. Infantile dreams expanded to include the shimmering light, human murmuring, the cries of gulls. The child swam in her visions like a fish. Once her mama floated down to her beneath the waters. Mama was not a fish, and underneath the surface, where amber light filtered, her mama could not live. Elise took her mama on her back and swam with her toward shore. But before she reached the sand of Black Rock Beach she awoke, crying "Mama" into the darkness of her bedroom. But the mama must have drowned.

It was in the summer following Elise's fourth birthday that she adopted the cottonwood tree as a mother. It had seven trunks grown together, forming nooks close to the ground into which the child could climb. From these nooks she looked back at Reel 'Em Inn, where she lived with Mama and Gramma and Grampa Pearson because by that time her daddy was fighting a war so that the children in Europe could have bread. The mother tree sheltered her. Even if the Germans and the Japs came across the ocean with bombs, the tree would not fall.

"What's real, Mama?" Her mama, whose grown-up name was Kate, sat by the mangle in the laundry feeding damp sheets through the rollers.

"Are the frogs real?"

"The thing in the houseboat?"

Just then the sheet went around the roller twice and tangled.

"Now look at what you've made me do. How often do I have to tell you not to bother me when I'm mangling?"

If not for the frogs, Elise would have avoided the houseboat. They sang in the long grasses that grew up around the gray wooden boards of its hull. Years ago, before she was born, Grampa Pearson had landed the boat and turned it into a cabin.

"Why don't people stay there anymore?" Elise asked her grandmother.

"It's too old now." Gramma Pearson pulled the clothespins off the sheets and folded them as she took them from the line to be mangled.

"Were people scared to stay there?"

"Scared of what, Peanut?"

"The thing behind the curtain."

"There's something behind the curtain."

"There's nothing in there, Peanut. Just old jars on the countertop."

"Maybe it's light shining off a jar."

"It's probably your imagination."

The houseboat sat above the reed bed, its stern sticking out over a rise of land above the water. If Elise stood on the boat stern she could imagine herself a captain of a ship. Inside the cabin were two old beds, a table, and under the window, the counter stacked with dozens of Mason jars. A door separated the space inside the bow of the houseboat from the cabin. The door was locked.

Something lived behind the locked door. Locks couldn't hold it in. One day as Elise was leaving the houseboat and running through the trees toward the inn, she looked back. A face peered out the window.

Gramma left the laundry basket under the clothesline and walked with her up the gravel road, past the inn toward the houseboat.

A face appeared and disappeared.

"It's nobody, sweetheart. It's a tear in the curtain and the sunlight on a jar. Just like I said." She took Elise's hand. "I'll show you."

They climbed the wooden steps and Gramma Pearson pulled open the squeaky door. She put her fingers through the ragged Woolworth lace.

When you were inside the houseboat it was a curtain, but when you walked down the path it was a face. It all depended upon how you looked at it. Maybe both were real.

Maybe everything was real.

Maybe what adults called imagination was a real thing you couldn't touch yet.

This thought comforted her until the day her father returned from war. After that, even the song of the frogs gave no comfort. Horrified, she saw them one night as they swarmed across the road; she saw them in the headlights' beam. Her father pulled the car around to the back of the inn, as close as he could get to the wood box and the door of their bedrooms, but Elise couldn't make herself step on the grass. She imagined the scrunching of delicate bones as her foot came down, and she heard in her mind the cry frogs certainly must make as they die.

Mark Rozzo Los Angeles Times [Weber's] first novel is a quiet revelation, charting the paths of several women whose lives intersect with the church, with music, and with one another....she has created a delicate and compassionate tone poem about the dangerous entanglement of religion, aesthetics, and desire.