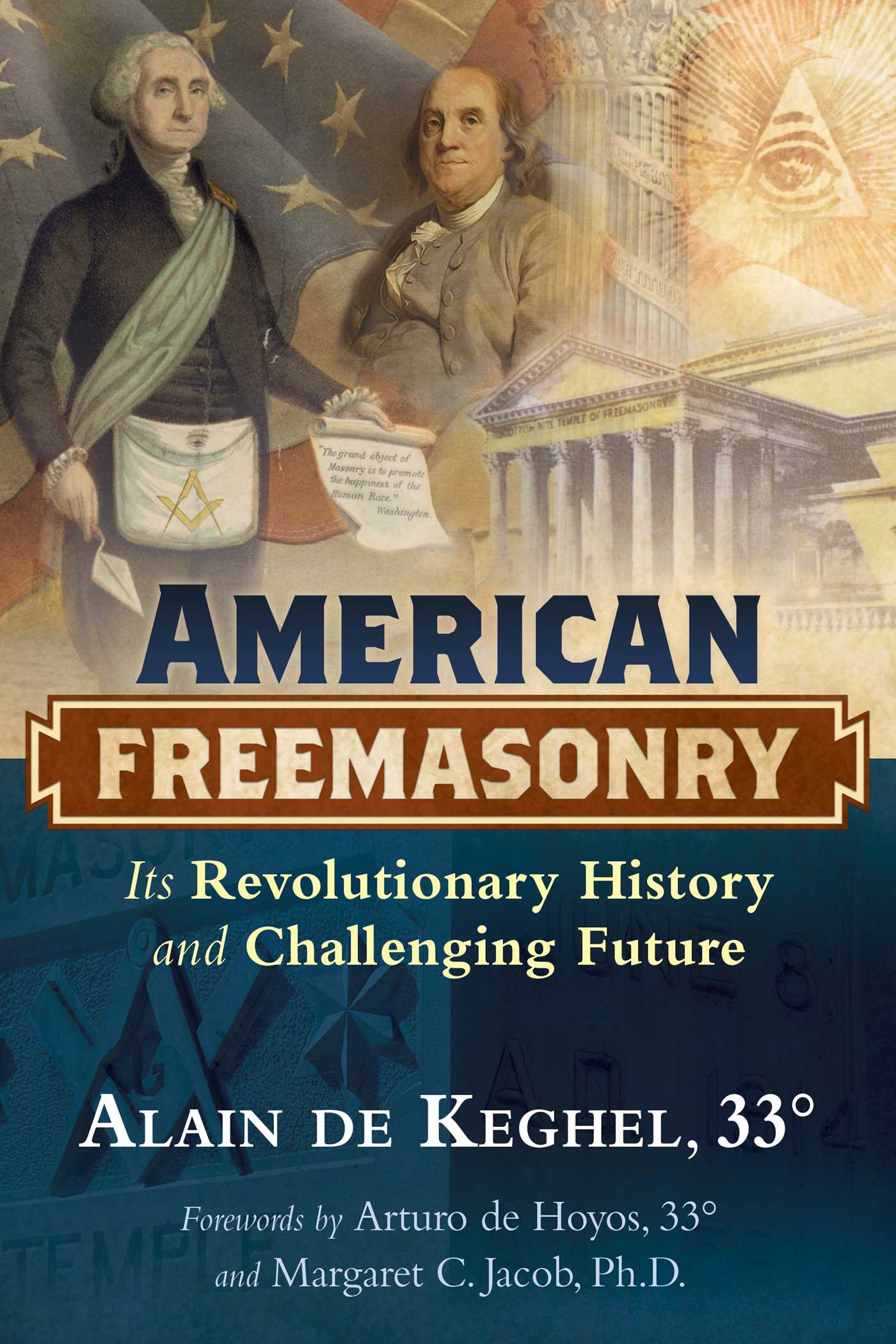 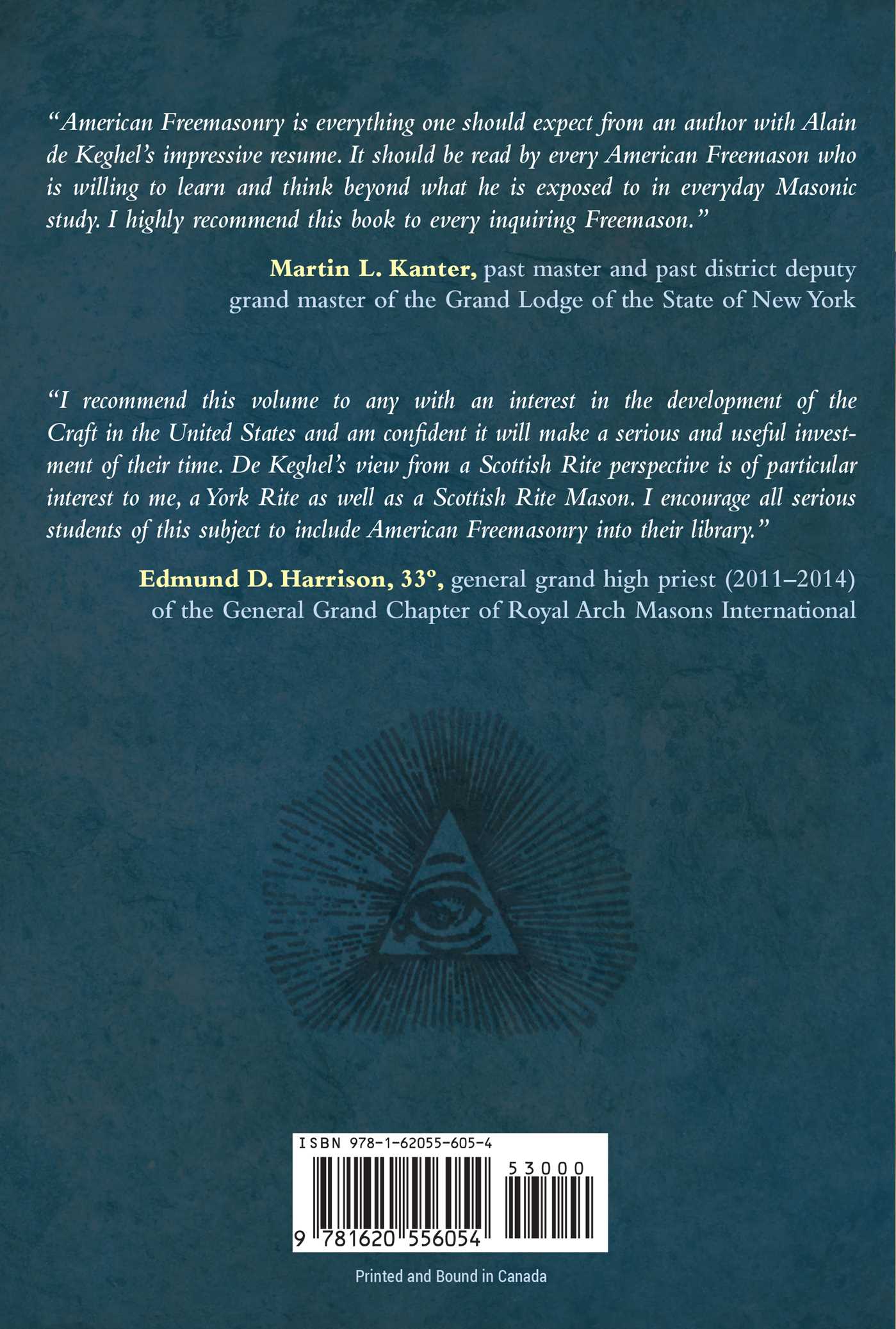 Its Revolutionary History and Challenging Future

Explores the American Masonic system and its strengths and failings

• Investigates the racial split in American Freemasonry between black lodges and white and how, unlike French lodges, women are ineligible to become Masons in the U.S.

Freemasonry bears the imprint of the society in which it exists, and Freemasonry in North America is no exception. While keeping close ties to French lodges until 1913, American Freemasonry was also deeply influenced by the experiences of many early American political leaders, leading to distinctive differences from European lodges.

Offering an unobstructed view of the American system and its strengths and failings, Alain de Keghel, an elder of the Grand Orient de France and, since 1999, a lifetime member of the Scottish Rite Research Society (Southern U.S. jurisdiction), examines the history of Freemasonry in the United States from the colonial era to the Revolutionary War to the rise of the Scottish branch onward. He reveals the special relationship between the French Masonic hero, the Marquis de Lafayette, and the Founding Fathers, especially George Washington and Benjamin Franklin, including French Freemasonry’s role in the American Revolution. He also explores Franklin’s Masonic membership, including how he was Elder of the lodge of the Nine Sisters in Paris.

The author investigates the racial split in American Freemasonry between black lodges and white and how, unlike French lodges, women are ineligible to become Masons in the U.S. He examines how American Freemasonry has remained deeply religious across the centuries and forbids discussion of religious or social issues in its lodges, unlike some branches of French Freemasonry, which removed belief in God as a prerequisite for membership in 1877 and whose lodges operate in some respects as philosophical debating societies. Revealing the factors that have resulted in shrinking Masonic enrollment in America, the author explores the revitalization work done by the Grand Lodge of California and sounds the call to make Freemasonry and its principles relevant to America once again.

The American Spiritual Infusion and Freemasonry

The Morgan Affair and the Anti-Masonic Movement

If there is any well-known episode that speaks to the twists and turns of the Masonic Order in the United States of America, it would be the Morgan Affair (whose details remain murky to most), above all others. Yet the scandal (this is clearly a case where the word is appropriate), inspired by the mysterious disappearance of William Morgan, was so resounding that the shockwave it produced is still echoing more than a century and a half later.

What was the nature of this scandal? Everything appears to have been started by a mundane announcement of the divulgation of the “secrets of Freemasonry.” There had been quite a few earlier ones, mainly Samuel Prichard’s famous Masonry Dissected13 published in London. It was soon followed by a French translation in Paris. This was far from being an isolated action in the United States.It is also helpful in this context to make reference to the republication in 1730 of The Mystery of Freemasonry published by Benjamin Franklin himself. Morgan made the announcement in Batavia in 1826 that an imminent publication was in preparation on the secrets and practices of Freemasonry. He nevertheless did not take into account a religious, social, and political context that was quite different from the one in which Franklin had acted without arousing the slightest dismay.

In 1798, two books condemning an alleged Masonic conspiracy [were published]: Proofs of a Conspiracy Against All the Religions and Governments of Europe by the British writer John Robinson, as well as the Mémoires illustrant l’histoire du jacobinisme [Memoirs Illustrating the History of Jacobinism] by Abbé Barruel, a former French Jesuit. These publications left nothing to chance. They fell into a post-1789 anti-revolutionary offensive, which tended to lend credence to the theory of a conspiracy hatched by the Illuminati of Adam Weishaupt, who was accused of having infiltrated the Masonic lodges. Both Robinson and Barruel raised the standards of throne and altar to put people on their guard against the threat they anticipated would soon emerge in all lands posed by the apostles of equality, liberty, and popular sovereignty. To prop up their theory of a Masonic conspiracy, Robinson and Barruel made the case that Weishaupt, a professor of canon law at Ingolstadt University in Germany, through the Order of the Illuminati, taught the “precepts of resistance to the authority of the state, promising to destroy ecclesiastical power.”

The echoes these assertions found first in the Protestant religious circles of the United State were all the greater an authentic, primordial alliance between freedom and religion that already existed in this country. Since the heroic era of the Mayflower, religion has been deeply inscribed within the genes of American political and social life. American religious thought is therefore consubstantial to this society that did not follow the same paths as Europe, where the Encyclopedists in France and Kant in Königsberg initiated the separation between religion and society, whereas across the Atlantic, although a formal separation between Church and State existed, God was never declared dead and was never entirely absent from public debate. It so happens that these revelations, mixed with deeply felt speculations, demonized the “enemies of the altar and the throne,” by identifying them as minions of Satan, cosmopolitan individuals without faith or law, subversive traitors, and promoters of moral anarchy.

The mistake made by William Morgan and his publisher David Miller, who had certainly been initiated into Masonry but never moved beyond the grade of Apprentice, was, most likely and primarily, to have not realized that the context had changed and that the timing of their undertaking was particularly ill chosen. Both men appear to have been, in the eyes of many historians, essentially motivated by the lure of immediate profit. Morgan had such a shady reputation personally that he easily inspired some distrust.

Morgan’s Masonic initiation is still a source of questions as there remains no trace of its having ever occurred. Some venture the hypothesis that he may have been received into a lodge in Canada, then would have peddled his knowledge of the rituals he had learned by heart by becoming an itinerant tutor--in return for money--in the service of the lodges. Contrary to some theories that tend to denigrate Morgan’s abilities, his intellectual capacities--his memory in any case--do not appear to be the subject of any doubt, as opposed to his ethics. He is believed to have even acquired an excellent encyclopedic mastery of the entire corpus of the Order’s rituals.

Freemasons, staggered as much by Morgan’s candor as by his greed, for that was perhaps his primary motivation, attempted to buy the manuscript. This was a wasted effort. This is the point where everything becomes complicated and the reading of the true motivations of Morgan and his publisher become unclear. If greed alone was the foundation of their undertaking, why then did they refuse to surrender the manuscript? From this point, focus was placed on questions concerning their desire to harm the Masonic Order and on possible sponsors of their plan for new divulgations.

The house of the publisher David Miller was set on fire several times. This is a clue that is hardly deceptive and would become a fairly legitimate source of suspicion. “Who benefits from the crime?” we could ask. Those who know America well will not be surprised by the methods applied in a society that still often carries the mark of the pioneers, accustomed to bullying those who for one reason or another are forming an obstacle to their designs. A society that knows, perhaps more than anywhere else, the primacy of violence when it involves ensuring that one’s “rights” prevail, and that, against all democratic humanist logic, defends the absolute right of gun ownership.

Alain de Keghel served as chair of the Supreme Council of the Grand Orient of France from 2002 to 2008. In 1994 he became a lifetime member of the Scottish Rite Research Society (Southern U.S. jurisdiction). The chair of an independent European Masonic Research Society, he has worked with the Philalethes Society in North America and with the research lodge Quatuor Coronati no. 8 in Germany. He is the former Consul General of France in Tokyo and Washington, D.C., and lives in Paris.

“American Freemasonry is everything one should expect from an author with Alain de Keghel’s impressive resume. The author is a committed and accomplished Freemason, scholar, historian, and career diplomat. The book reflects his years of travel, study, and extensive Masonic activity around the world. It should be read by every American Freemason who is willing to learn and think beyond what he is exposed to in everyday Masonic study. Mr. de Keghel presents an extensive history of our Craft on both sides of the ocean and philosophical divides, which is well worth the effort to read and ponder. It may be a very long time, if ever, that we may reconcile the differences outlined in the book. This should not prevent us but rather encourage us to better understand how our brothers from other Masonic traditions practice their Craft and how they perceive us. Reading this book should further promote interaction with all our brothers within the bounds of our obligations. Interaction is always a good thing, especially with a group with whom, despite our differences, we have so very much in common. I highly recommend this book to every inquiring Freemason.”

– Martin L. Kanter, past master of the Grand Lodge of the State of New York

“I recommend this volume to any with an interest in the development of the Craft in the United States and am confident it will make a serious and useful investment of their time. De Keghel’s view from a Scottish Rite perspective is of particular interest to me, a York Rite as well as a Scottish Rite Mason. I encourage all serious students of this subject to include American Freemasonry into their library.”

Its Revolutionary History and Challenging Future