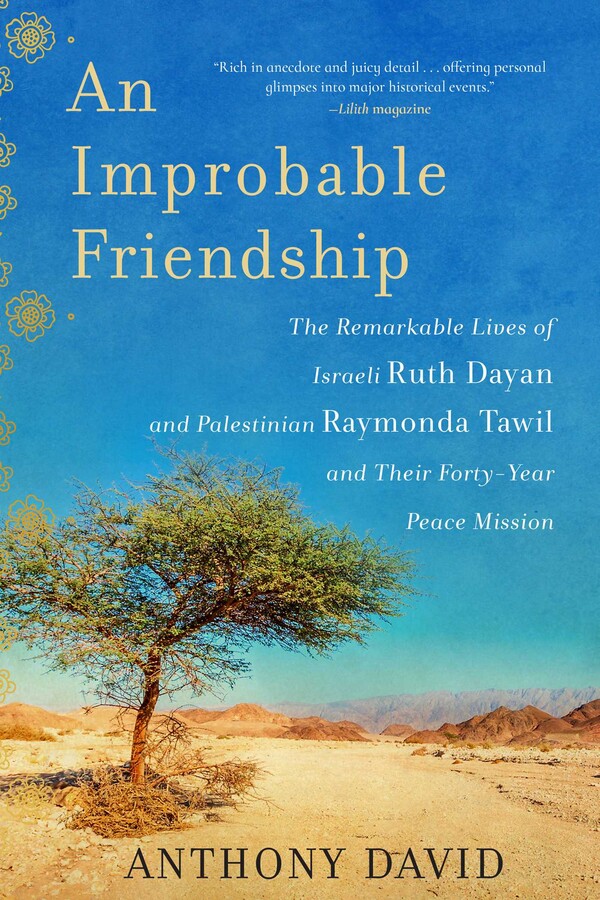 An Improbable Friendship is the dual biography of Israeli Ruth Dayan, now over one hundred, who was Moshe Dayan's wife for thirty-seven years, and Palestinian journalist Raymonda Tawil, Yasser Arafat's mother-in-law, now seventy-eight. It reveals for the first time the two women’s surprising and secret forty-year friendship and delivers the story of their extraordinary and turbulent lives growing up in a war-torn country.

Based on personal interviews, diaries, and journals drawn from both women—Ruth lives today in Tel Aviv, Raymonda in Malta—author Anthony David delivers a fast-paced, fascinating narrative that is a beautiful story of reconciliation and hope in a climate of endless conflict. By experiencing their stories and following their budding relationship, which began after the Six-Day War in 1967, we learn the behind-the-scenes, undisclosed history of the Middle East's most influential leaders from two prominent women on either side of the ongoing conflict.

An award-winning biographer and historian, Anthony David brings us the story of unexpected friendship while he discovers the true pasts of two outstanding women. Their story gives voice to Israelis and Palestinians caught in the Middle East conflict and holds a persistent faith in a future of peace.

Anthony David has written eight books, including his collaboration with Palestinian leader Sari Nusseibeh on his autobiography, Once Upon a Country: A Palestinian Life, voted one of the best books of the year by the Christian Science Monitor and Amazon and awarded the biennial 2010 Siegfried Unseld Prize presented by Suhrkamp; Lamentations of Youth: The Diaries of Gershom Scholem 1913–1923; and the forthcoming The Letters of Hannah Arendt and Gershom Scholem. He holds a PhD in European history from the University of Chicago and currently lives in Jerusalem.

“With its fascinating details about the relationship between Moshe Dayan’s wife and Yasser Arafat’s mother-in-law, An Improbable Friendship reminds us of a bygone era when influential Palestinians and Israelis worked together for peace.”—Trudy Rubin, Worldview columnist, The Philadelphia Inquirer

“There are many powerful men in this riveting book—Moshe Dayan, Yasser Arafat, Ezer Weizman, among others—and enough intrigue, violence, and danger to fill a thriller. But the two suns at the center of this illuminating dual biography are women—brilliant, passionate, driven feminists whose unique friendship should serve as a model for international relations and people-to-people dialogue. Without downplaying their political, cultural, and religious differences, Anthony David deftly describes what fuels the enduring relationship between Ruth Dayan and Raymonda Tawil—their capacity to honor the dignity and aspirations of the other and their indefatigable quest for peace. Had Ruth and Raymonda been in charge, the Israeli-Palestinian conflict would have ended four decades ago. Think about that as you dive into this compelling story.”—Letty Cottin Pogrebin, author of Single Jewish Male Seeking Soul Mate and founding editor of Ms. magazine

“To someone like me who has been deeply involved in pursuing peace between Israelis and Palestinians for fifty years, this book reveals unexpected nuggets of gold in describing the unlikely friendship between the much older Ruth Dayan and the fearless beauty, Raymonda Tawil. This untold story through the eyes of two extraordinary women, both feminists, pursuers of peace who never gave up, is a compelling read. Especially riveting is the account of their respective daughters, Yael Dayan, writer and activist, and Suha Tawil, widow of Yasser Arafat. It’s a revelation.”—Lilly Rivlin, filmmaker and longtime peace activist

“Anthony David transports readers across the divide. It’s a well-written book about empathy, hinting at possibilities for peace.”—Jewish Week

“From their relationship we learn the behind-the-scenes history of the Middle East.”—Jewish Advocate

“Perhaps their story never inspired a greater closeness between their two peoples as they once hoped it might. But it still stands after all these years as a testament to our human capacity to reach out to one another even in the darkest times.”— Kevin Connolly, BBC