And Then Things Fall Apart

Keek and her boyfriend just had their Worst Fight Ever; her best friend heinously betrayed her; her parents are divorcing; and her mom’s across the country caring for her newborn cousin, who may or may not make it home from the hospital. To top it all off, Keek’s got the plague. (Well, the chicken pox.) Now she’s holed up at her grandmother’s technologically barren house until further notice. Not quite the summer vacation Keek had in mind.

With only an old typewriter and Sylvia Plath’s The Bell Jar for solace and guidance, Keek’s alone with her swirling thoughts. But one thing’s clear through her feverish haze—she’s got to figure out why things went wrong so she can make them right.

And Then Things Fall Apart DATE: July 12
MOOD: Fractured
BODY TEMP: 103.5
I once watched a collector kill a monarch butterfly on a nature show by putting it under a glass dome with a piece of cotton soaked in gasoline. The insect’s wings flapped less and less until they were perfectly still.

Suffocation is a cruel way to go.

I can’t breathe under my bell jar either.

I have the chills.

I’m drenched with sweat, smothered beneath a hundred-pound coverlet.

My head hurts. My eyes hurt. My tongue feels heavy so it’s hard to talk. If I stop typing, a vein in my forehead twitches with my pulse.

I close my eyes, leaning my head back on my pillow to rest. For a second it’s as dark as a midnight sky. Then I imagine the shattered pieces of my heart sparkling like mirror shards.

But when I open my eyes, I am still here: in the spare bedroom in my grandma’s house with her ancient green bottle of Muguet des Bois from her own high school years on the dresser. My deceitful and depraved father is still staying in the basement. My mother is still in California visiting her sister’s premature newborn, and my boyfriend, Matt, is still avoiding me.

The best years of my life.

And then the itching resumes with renewed fury.

Because I have the chicken pox. It’s a virus that, contrary to popular belief, you can still catch well into your teens.

I think I am losing my mind a tiny bit at a time. When the chatter in my head gets too loud, I start to type. The noise from the typewriter keys drowns out the noise in my head. Getting what I’m thinking onto paper in smudgy black letters feels good, like stretching or punching a wall. Or crying. Which I’m not doing much of anymore because it doesn’t seem to help.

I’m not the first person to ever be sick, enraged, depressed, delirious, betrayed, and confused all at the same time, or to use a typewriter to examine life in all of its jagged-edge glory. Sylvia Plath did it too, and she is the most inspired, beautiful, and subversive writer of her generation. She’d be almost one hundred years old if she were alive. So even if she didn’t kill herself when she was thirty, she’d be dead by now. At least she left us her poems and The Bell Jar.

The Bell Jar is about a young writer named Esther Greenwood and how she goes a little crazy and then gets better. But the book is really all about how life is unfair. And right now, whose life is more unfair than mine?

It’s also about losing your virginity, and babies being alive and beautiful, or dead and grotesque, and either way ruining your life. But mostly it is about how hard it is to be yourself in a world that wants you to be someone who is easier to deal with. And it’s about writing. Which I also love. And trying to kill yourself, which I’m so not into, even though being alive is sofa king hard for me lately.

For the past four months I’ve been reading my tattered dog-eared copy of the novel over and over again because it seems like the sanest thing to do. The book is challenging and comforting and often hilarious, unlike my own day-to-day, which is none of those things. Sylvia Plath is there for me when actual living people upon whom I have depended my whole life, are not. What I mean to say is, without her words, I’d be exponentially more messed up than I am already.

Do I have a computer? A link to the outside world? No. My cell is even out of commission since the last fight I had with Matt when I flung it against the wall of the walk-in freezer at my parents’ restaurant. The screen’s not cracked or anything, but the # key chipped off and is somewhere in a vat of shredded mozzarella. I didn’t tell my parents, because then they would have asked what the fight was about. (My virginity! Huzzah!) And for all I know, some poor customer is going to swallow a # key and die of a ruptured intestine and sue my parents, and it will all be my fault.

Without real entertainment, I will try anything to amuse myself. Not unlike the polar bears at the Brookfield Zoo, I need complex toys to keep me from going insane in my ten-by-ten cage. When Gram lugged this electric typewriter up from the basement this morning so I could practice my “typing skills,” I was actually excited. She gave me a lesson on shifting and carriage return before she left to drop off shirts for my dad at the dry cleaner’s.

It’s a gray-green IBM, and weighs about a thousand pounds, but actually it is pretty amazing. Fast. When I hit the keys, they clickity-clack. As the ink presses onto the paper, it’s like I’m actually making something. Like art.

Maybe it’s the pox, or my frying brain, but all I really want to do is type. I’m sick of being a hunt-and-pecker, typing like an intelligent duck. I was halfheartedly taking an online keyboarding class, and would have still been at it if I hadn’t gotten stricken in my prime. But I am trapped in this little bedroom, which used to be my great-grandma’s before she died. I’m alone with this antique typing device. My brain. And a fever. How much more Plathian can I be?

Computers are quiet and clean and totally distracting because the Internet is there, lying in wait for a moment of weakness to pounce on your creativity and progress. Sylvia didn’t have to deal with Facebook. Blogs. Etsy. Twitter, for Christ’s sake.

Gram just has basic cable, so TV is rather limited, but doable. The woman makes perfect boiled eggs, though, and buys the really good orange juice, the Sabor Latino with guava kind that my mom says smells like feet. Weird, the things that are making me miss my mom. She’s in Los Angeles, but she might as well be in Siberia.

My head is throbbing and I am scratching so much that the sheets are leopard printed with spots of light pink blood. Not that my father would even notice. Dad is either working alone at the restaurant or driving the Dine & Dash delivery van around the streets of his youth, wondering where the hell it all went wrong and thinking not at all about his abandoned, ailing, and itchy only child—me.

High on the exam table,
You watch me from the doorway.
While the doctor twists my arm
This way
And that.
A specimen.
My heart plays dress-up.
Disguised as a little girl,
I am asleep on a merry-go-round.
Itching and aching,
Mouth dry as toast.
What to do?
Daddy, Daddy, you traitor, I’m through. 6 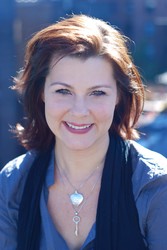 And Then Things Fall Apart