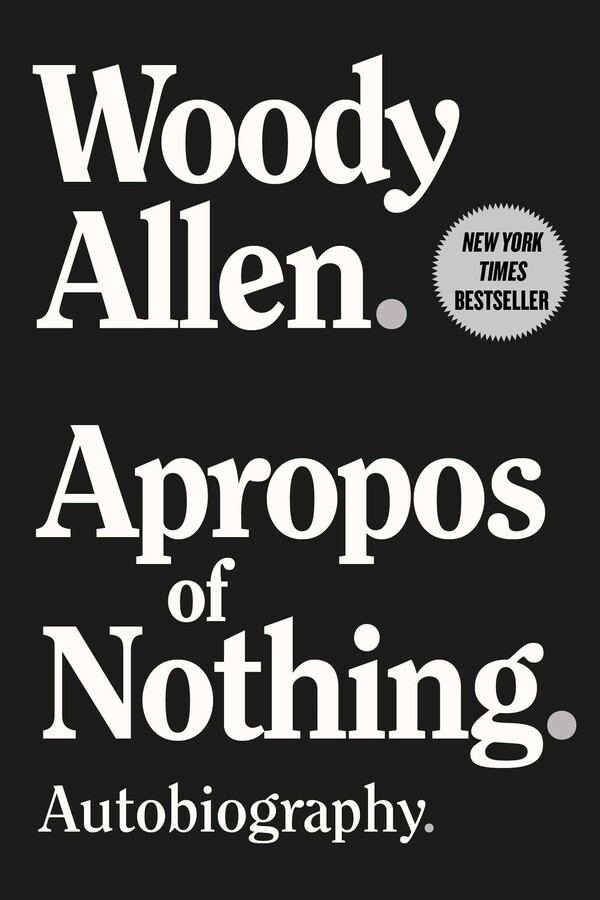 The Enormously Entertaining Memoir by One of the Great Artists of Our Time—Now a New York Times, USA Today,
Los Angeles Times, and Publishers Weekly Bestseller.

In this candid and often hilarious memoir, the celebrated director, comedian, writer, and actor offers a comprehensive, personal look at his tumultuous life. Beginning with his Brooklyn childhood and his stint as a writer for the Sid Caesar variety show in the early days of television, working alongside comedy greats, Allen tells of his difficult early days doing standup before he achieved recognition and success. With his unique storytelling pizzazz, he recounts his departure into moviemaking, with such slapstick comedies as Take the Money and Run, and revisits his entire, sixty-year-long, and enormously productive career as a writer and director, from his classics Annie Hall, Manhattan, and  Hannah and Her Sisters to his most recent films, including Midnight in Paris. Along the way, he discusses his marriages, his romances and famous friendships, his jazz playing, and his books and plays. We learn about his demons, his mistakes, his successes, and those he loved, worked with, and learned from in equal measure.

This is the hugely entertaining, deeply honest, rich and brilliant self-portrait of a celebrated artist who is ranked among the greatest filmmakers of our time.

So here I am, single, about to cast Play It Again, Sam the play with Tony Roberts as my costar. All we need is to find the right girl to play Linda, the female lead. The director is Joe Hardy, a fine director who knows what he’s doing. He and I sat in the back of the theater auditioning one talented actress after another. There’s a lot of talent out there and not enough good roles. Sandy Meisnter was a famous, highly respected acting teacher in New York who ran the Neighborhood Playhouse, where so many terrific actors emerged. Somewhere, he collared David Merrick and raved about a girl in his class that he found to be sensational. Her name was Diane Keaton. Real name Diane Hall, but there already was an actress with that name and the union does not permit one to use a name already in use.

So after this buildup, we’re all sitting in the theater waiting for Keaton to audition. In walks a lanky young girl. Let me put it this way: If Huckleberry Finn had been a very beautiful woman, that’s who was up there onstage. Keaton, who apologizes for waking up in the morning, a rube from Orange County, denizen of swap meets and tuna melts; an emigrant to Manhattan who came here and works as a coat-check girl, who had worked the candy concession in a movie house in Orange County and was fired for eating all the candy herself, tried making the few obligatory hello lines to us all. This was a yokel who spoke of her Grammy Hall, the boarder George who got a free turkey from his union every Christmas, and answered compliments with “Honest injun?” But what can I tell you, she was great. Great in every way. One talks about a personality that lights up a room, she lit up a boulevard. Adorable, funny, totally original in style, real, fresh. When she left we knew we had to go through the other scheduled actresses, but in our minds she had the part.

Rehearsals under Joe Hardy went smoothly. Tony Roberts was like a kid in a candy store, since the show had a half-dozen pretty girls who’d appear in the lead character’s fantasies. Tony sprang into action the first day, complicating his already baroque social life. I was getting friendlier and friendlier with Tony, but Keaton and I were each pursuing our own social agendas, chatting politely but sparsely. A guy called for her every day, which I naturally thought was her boyfriend but later found out was her manager. I was dating whoever would say yes to my desperate pleas to let me feed them. One time, a week before going to Washington, DC, for our opening I had a date with a very beautiful brunette. I took her to dinner and we had a nice time, and we made another date two nights down the line.

In the intervening night I was rehearsing with Keaton, and Joe Hardy suggested we run lines to memorize them more fluently. She of course knew hers like Eve Harrington but I, despite having written them, needed more time to get them down pat. We broke for dinner, and she and I hopped across the street to a joint next to McGirr’s Billiards, where I sometimes shot pool. At that impromptu dinner she was so charming, so lovely, so pretty, so scintillating, that I sat there thinking, Why the hell am I going out with that other woman tomorrow night? Keaton is magical. Of course she ate like Primo Carnera. I never saw a person outside of a logging camp tuck it away like that.

Anyway, to cut to the chase, by the time Play It Again, Sam opened in DC, we were lovers. We remained lovers in Boston and back in New York. I had just purchased a penthouse on Fifth Avenue and she lived in a hovel all the way east, a single room made homey and pretty without spending a nickel on it. She clearly had an artist’s eye. You can tell by the way she dresses, which is trendsetting if you happen to think a dead monkey’s paw pinned to the lapel of your sweater is chic. Let’s just say Keaton always suited up with a certain eccentric imagination, as if her personal shopper was Buñuel. But it was not just a fashion flair. She takes great photos, can act, sings beautifully, dances, writes well. We’ve remained close friends since we met. When I finished recutting Take the Money with Ralph Rosenblum, I screened it for her and she said it was good and funny and not to be so worried, and she’s been my North Star, go-to person ever since. Because in addition to tasteful and bright, she’s totally inner directed. You can intone Shakespeare’s praises all day, but if she finds something of his a bore, she doesn’t care how revered his poetry is or what the professors or the public says. She’s her own person. I have always shown her my work, and she’s one of the only people whose opinion I really care about.
Woody Allen

“A lively tale of growing up lower-middle-class in Brooklyn; a gossipy account of scrambling up the comedy ladder from tabloid gag writer to Oscar winner . . . This memoir is for the most part a pleasure to read and entertaining company. . . . You’d have to be a real sourpuss not to laugh at the fusillade of one-liners, two-liners, three-liners and so on.”—Peter Biskind, Los Angeles Times

“He has an authentic and easygoing voice on the page.”—New York Times
“It’s a fantastic book, so funny. . . . You feel like you’re in the room with him and yeah, it’s just a great book and it’s hard to walk away after reading that book thinking that this guy did anything wrong.”—Larry David

“An absolute delight, hilarious and endearing and glistening with stardust.”—National Review

“Master, from youth, at self-deprecating humor, and born with New York City cojones, Allen says what others just think, controversy be damned.”—New York Journal of Books

“It was a laugh a minute.”—Newark Star-Ledger

"An enjoyable excursion into the mind, personality, and delicious whimsy of Woody Allen . . . one of our finest filmmakers and a man of droll wit, who came of age as an artist in the 1970s, just in time for his unique combination of cynicism and romanticism, as old gods died and new ones failed to appear."—Jim Delmont, Omaha Dispatch

“His wit is on full display.”—The Federalist