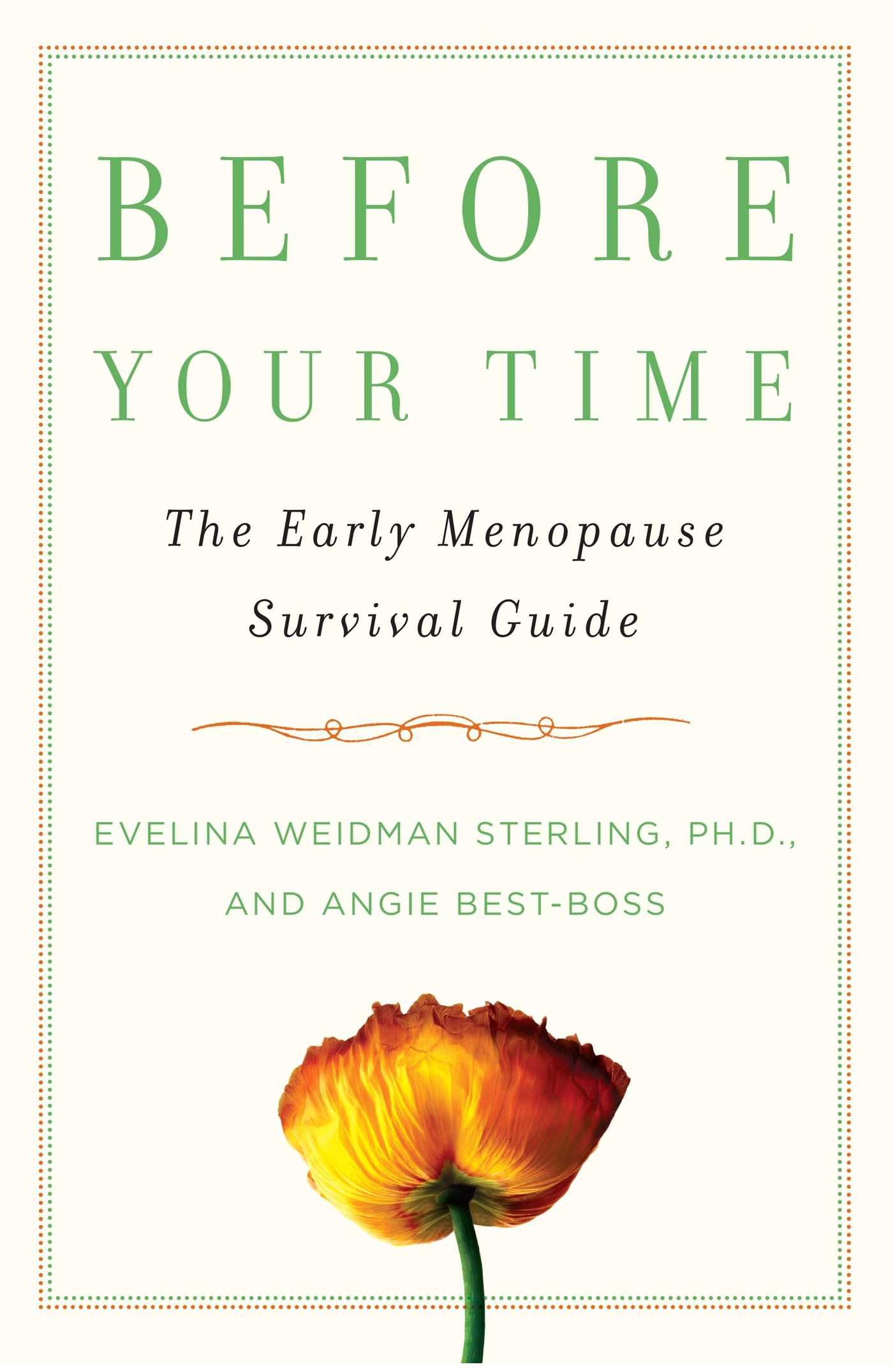 HAS "THE CHANGE" COME TOO SOON ? DON’ T WORRY, YOU’RE NOT ALONE!

Every year more than two million women enter early menopause and find themselves suddenly dealing with a host of unforeseen (and little discussed) issues. In Before Your Time, Evelina Weidman Sterling and Angie Best-Boss provide expert advice and answer all your questions, including:

Is it safe to start hormone therapy in your thirties rather than in your fifties?

What are your fertility options?

How can you combat the long-term effects of early menopause, such as a greater risk of osteoporosis, heart disease, and diabetes?

How will early menopause affect your relationships? Your sex life? Your sense of self?


Before Your Time brings you the best-researched, most up-to-date answers to all those tough-to-ask questions. The good news: there is more research and information available now than ever before to keep you safe and healthy, and it’s all right here!

Not Your Mother’s Menopause

After twenty years of regular monthly reminders that “I am Woman,” this absence of regularity is somewhat confusing. I am thirty-six, and part of what makes this tough is that a lot of people outside of my support network have never heard of this condition [premature menopause] and don’t always realize what I am going through, emotionally and physically. It feels like getting hit broadside by a speeding menopause bullet train to Hell, and you’re up to your eyeballs with symptoms that make whacking yourself over the head with a two-by-four seem like a fun idea. Now what? —Leah

MORE THAN SIX THOUSAND women enter menopause each day. For many, this change of life arrives too suddenly or too soon. Early or premature menopause results from a wide variety of causes—and is much more common than you think. Women who suffer from an autoimmune disorder, have survived cancer, undergone a hysterectomy, been diagnosed with premature ovarian failure, or who just inherited a bad case of genetics can all experience changes in their ovarian function. More than 5 million women have either experienced early menopause or are at risk for experiencing it.

What’s the big deal? There was a musical made about menopause—how bad can it be? Older women often embrace menopause as an entry into a new (and sometimes better) phase of life. Think of it: a new sense of self-assurance, grown kids, no mortgage, increased disposable income, and more free time—who isn’t ready for that?

But early menopause doesn’t rate the same hoopla. You get lots of the symptoms, none of the perks. And doctors aren’t really sure what to do with you. Instead, women are left wondering, “What the hell is going on? This isn’t supposed to be happening—not at this age, anyway! What’s a girl to do?” This book will help you better understand early menopause (including exactly what it is, why it happens, and what it should be more accurately called) and provide you with the necessary information and skills you need to take control of your life, mind, body, and soul.

Before we embarked on this project, we had many questions ourselves. Searching on the Internet and in bookstores for books on menopause, we were bombarded with images of friendly, older, “grandmotherly” types. You know the pictures—a woman with perfectly coiffed silver hair, usually wearing some pastel shade, either gardening or surrounded by colorful flowers. She is smiling one of those huge smiles that extend ear to ear as if saying “Isn’t this grand!” It can be if you’re in your fifties and menopause is seen as a badge of honor.

But what about for younger women—what’s in it for them? No resources reflected the struggles described by women we knew. We knew there had to be something better. We needed something that would speak to the millions of women who are blindsided by irregular menstrual cycles or early menopause wreaking havoc in their otherwise normal lives. We started asking women’s health experts: What are women who go through this supposed to do? Unfortunately, a common response was “menopause is menopause” at any age. But not all women are the same. Most women in their twenties, thirties, or even forties have very little in common with their mother’s or grandmother’s generations. Why, then, should the experiences be the same?

Our sex lives are different. Changing hormones strain relationships far differently when you are in your thirties than it does for women in their fifties. The treatments aren’t the same either. Women have different questions about hormone therapy. What might be safe and appropriate for an older woman to take for a decade or so may not be safe for her daughter to take for forty years or vice versa—what may be recommended for younger women may not be right for older women. Plus, family-building plans are impacted.

Early menopause isn’t something we talk about easily with girlfriends. At our age, most women’s reproductive cycles run like clockwork. Women may have several friends and colleagues going through the same issues but never know it. More than one woman has kept tampons in her desk drawer so her colleagues won’t suspect she isn’t “normal.” Many women who go through this feel alone.

Unlike age-appropriate menopause, which is completely expected and considered a part of the natural aging process, there is nothing normal or natural about early or premature menopause. In fact, using the term “menopause” implies that it’s a natural process that is just occurring a little earlier than usual. No big deal, right? Wrong!

The typical age of menopause is around fifty. But for millions of women hormone changes occur before the age of forty. The complete cessation of menstruation that occurs before this age, whether surgically induced (such as after a hysterectomy), medication-induced (after some forms of cancer treatment), or due to plain old luck-of-the-draw genetics, is known as premature menopause. Everything from the environment to premature ovarian failure, cancer, and other illness plays a role, and diminishing ovarian function can actually start at any age.

A few important statistics about premature and early menopause:

When Something Is Wrong

The best decision I have made so far about this condition is this: I made sure I educated myself about my condition. I talked about it with people. When I first found out, I felt very alone; I didn’t know that there were other people out there with the same situation. I have also come to some sort of peace with this. It has taken me a long time. I allow myself to cry about it when I feel down about it, but I also reach out when I need help. The good thing is, I know I am not alone. —Marybeth

We believe you can take charge of both your health and your life. You are unique, and there is no cookie-cutter approach to your health and well-being that will make you instantly happy, perfectly healthy, and rich beyond your wildest dreams. (We wish!) No two women will have exactly the same pattern of symptoms or long-term concerns, so the decisions you make may be different from the decisions someone else with the same diagnosis makes. That doesn’t mean you are right and she is wrong or vice versa. It may mean that what you choose to do for treatment is right for right now. How you address your health and well-being will likely change over the years, and we hope it does. In this book we give you the tools to take the helm.

A disruption of the menstrual cycle can be a difficult transition for any woman, but when it comes long before you are ready, it can include many additional challenges. However, life can be good while you are living with and adapting to this reproductive system challenge. It is entirely possible for you to maintain your youthfulness and vibrancy and live a very full and satisfying life. It may require counseling, medical treatment, lifestyle changes, and a great support network, but you can be healthy and happy.

But (there’s always a “but,” isn’t there?) it won’t happen overnight. Or in two weeks. And it won’t happen automatically. Living well even though your ovaries are malfunctioning will take work, effort, and a decision to do so. You aren’t alone. Thousands of women have the same struggles, and their voices will join you along the journey.

In this book, we’ll explore some of the most common causes of early and premature menopause in more depth, explaining how to get a proper diagnosis. We’ll discuss the different treatment options available to alleviate your symptoms and help you live a healthy life. And we’ll look forward, at family-planning options and other lifestyle issues that are sure to arise.

I have finally discovered there is too little time in life to punish oneself for conditions one cannot control. I have chosen to lead a life in which I am active in the things I can control, as well as accepting the conditions I cannot. I cannot control my primary ovarian insufficiency (POI), but I can control my attitude toward it. I hope to share this attitude with others in the hope that they, too, one day will accept themselves for who they are and not for the disorder they carry. POI is a part of my life, but it is not my life. —Carly

Evelina Weidman Sterling is a nationally-recognized expert and award-winning author on infertility. Currently, Sterling is a PhD candidate in the Department of Sociology at Georgia State University, and holds a Master's degree in Public Health from Johns Hopkins University as well as a B.S. from the University of Mary Washington. She lives in Atlanta with her husband and two children.

Angie Best-Boss is an accomplished freelance women's health writer. She holds a Masters of Divinity with an emphasis in counseling from Union Theological Seminary and a B.A. in Sociology from Virginia Wesleyan College. She lives with her husband and three daughters in Indiana.