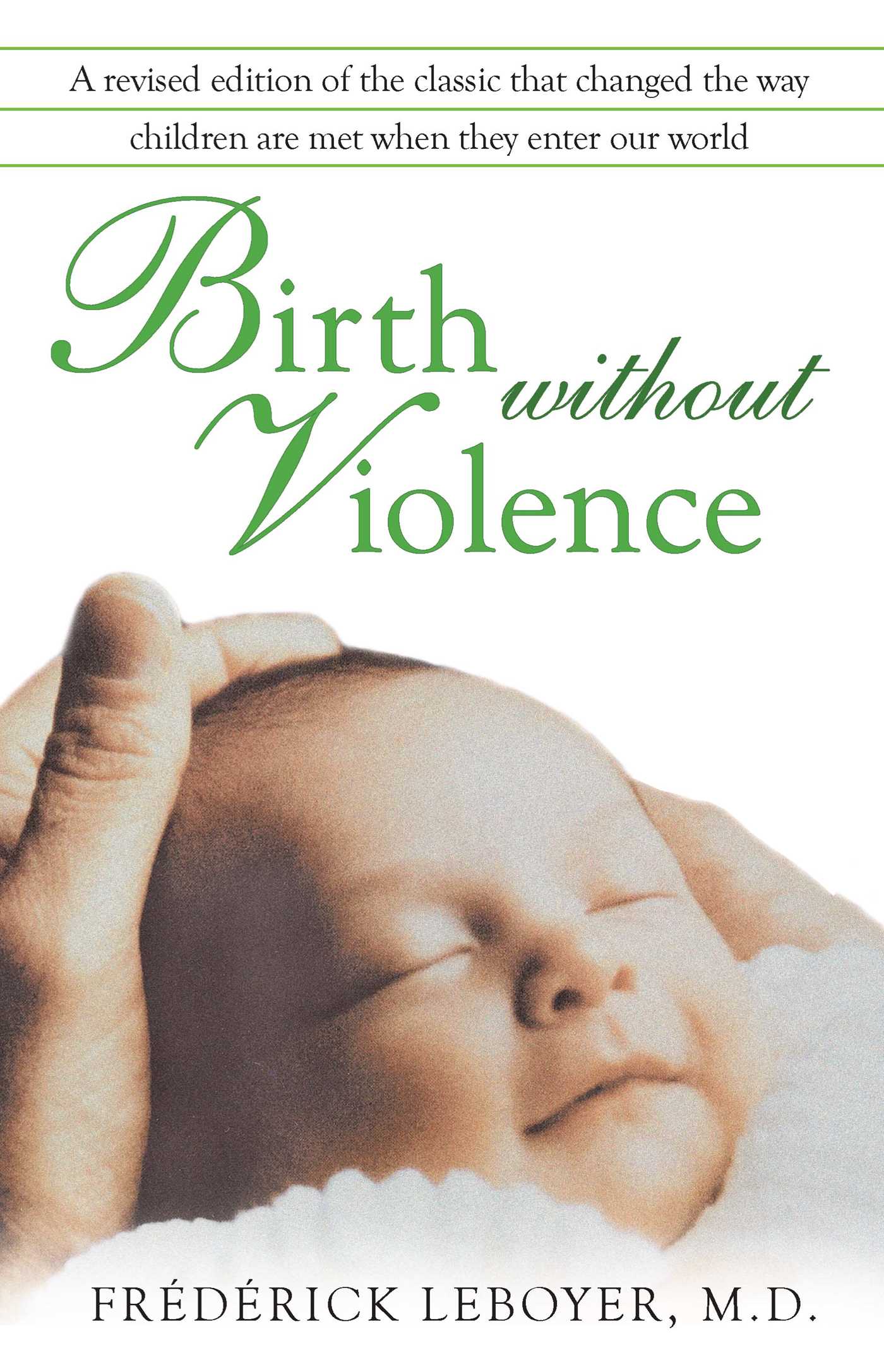 • Shows how gentle lighting, a quiet atmosphere, and a warm bath allow a newborn to ease the transition from womb to world without trauma or fear

• Includes a new preface by the author, the founder of the gentle birth movement

Birth without Violence is the first book to express what mothers have always known: babies are born complete human beings with the ability to experience a full range of emotions. First published in 1974, it revolutionized the way we perceive the process of birth, urging us to consider the birth from the infant’s point of view. Why must a child emerge from the quiet darkness of the womb into a blaze of blinding light and loud voices? Why must an infant take its first breath in terror, hanging upside down as its vulnerable spine is jerked straight? Why must the infant be separated from its mother after spending nine months inside her nourishing body?

Examining alternatives to technocentric approaches to childbirth, this new edition of the classic text, complete with a new author preface, shows us how we can ease the transition from womb to world without trauma or fear. Birth without Violence illustrates how to create an environment of tranquillity in which to welcome our children: a relaxed mother, gentle lighting, soothing atmosphere, and a warm bath that mirrors the child’s prenatal surroundings. Dr. Leboyer’s simple techniques demonstrate how a birth without violence has far-reaching implications for improving the quality of human life physically, emotionally, and spiritually.

7
Now the stage is set.
The lights are dimmed.
The curtain may rise.
The child can make his entrance.
At last he is here.

8
Head first, and then his shoulders, one after the other.
Either all this happens naturally, or some help is
needed at this critical moment.
As soon as the head is out the child wants to draw a breath,
which is impossible for him because his chest is still
imprisoned in his mother’s body.
If the shoulders are stuck, his progress
comes to a halt, and help is needed quickly,
because anguish is building up furiously in the child.
How can we help?
By sliding a finger under the child’s armpit we can help
the rotation of his body and liberate the little prisoner.
Then, holding him under both arms we hoist him
out, as if pulling him from a well, and put him
straight onto his mother’s belly.
Most important of all, we never, never, at any time
touch his head.
He’s lying on his mother’s belly.
And where better to receive the child than this
belly. It has the exact shape to receive
the baby. When he was within, it was rounded and convex;
it has now become hollow, and waits like a nest to cradle the child.
Soft and supple, it moves with
the rhythm of the mother’s breathing,
and the living warmth of her body makes it
the perfect place for the newborn to be.
Finally, and this is most important, because the
baby remains so near to her, the umbilical cord can remain
intact.

9
Cutting the cord the moment a baby has emerged from his
mother’s womb is an act of extreme cruelty, and harms
the baby to an extent that is hard to believe.
Leaving it intact, however, so long as it
continues to beat, transforms the whole birth experience.
For one thing, it forces the obstetrician to be
patient, and leads him, as well as the mother, to respect
the rhythm, the sense of time ordained by the child.
Besides, leaving the cord intact allows the
natural physiological changes to take place within the
child’s body at their own pace.
We have already described the way air suddenly rushing
into the baby’s lungs has the same effect on him
as a burn. But there is more.
Before his birth, the child lived in oneness.
For him there was no difference between
the world and himself, because inside and outside were
one. He knew nothing of polarities. He didn’t
know about being cold, for example, because cold
cannot exist without heat. The body temperature of
the mother and the baby are exactly the same. How
then could he appreciate any contrast?

As he enters this world, the newborn baby encounters
for the first time a kingdom of opposites in which
everything is either good or bad, pleasant or
unpleasant, agreeable or disagreeable, wet or dry.
What is the gate through which he enters this kingdom
of opposites?
Not through his senses, that comes much later,
but through breathing.
When he takes his first breath, he crosses a threshold,
a border. He breathes in, and from this action is born its
opposite: he breathes out.
And then in turn . . .

Thus he is launched irrevocably into the eternal
cycle, the never-ending oscillation, the very principle
of our world, in which everything comes back to this
breath, this pulsation.
He is in the world where everything, for always,
is born of its own opposite:
Day from night, summer from winter,
riches from poverty, strength from weakness, never ending,
without beginning.

10
To breathe is to become one with the world outside,
to tune in to the music of the spheres.
Its function is to make the blood take in oxygen
and get rid of wastes, mostly carbon dioxide.
But in this simple exchange, two worlds come
near each other, try to mix and touch: the world
of outside and the world of inside.

It is in the lungs where they meet--the blood
mounting from one’s own depths, the air
coming from above.
The blood and air rush to conjoin, anxious
to mix and mingle.

The blood arrives in the lungs, depleted of its
oxygen, its strength spent, dark with waste: the carbon
dioxide which makes it old.
Here it is going to rid itself of its old age, gain its
energy, rejuvenate.
Transformed by this visit to the fountain of youth, it
departs, alive, red and rich!
It returns to the depths where it gives forth its riches.
Once more lets itself be filled with
wastes, and then returns to the lungs. Thus the cycle
continues indefinitely.
As for the heart, it keeps pumping, pushing the blood
sending it, rich and red toward the thirsty tissues of
the organism, and sending it back when it has
become old and worn-out, for renewal to
the lungs.
How does all this happen in the fetus,
Where the lungs are not yet working? The blood of
the fetus, just like ours, needs to be renewed.
The placenta fulfills this role.

In the act of drawing breath, of oxygenating his own blood
with his own lungs, the child becomes himself, in effect
saying, “Woman, what do we have in common?
I no longer need an intermediary between myself and the world.”
Of course it is only the first step, for all the rest he
still relies totally on his mother.
But it is a step in the right direction.
With his first breath, the child sets forth on the road to
independence, to autonomy, to freedom.
But practically speaking, much depends on the way
this transition takes place.
Whether this transition is made slowly, progressively, or
brutally, in panic and terror, can make the difference
between a gentle birth
. . . and a tragedy.
Frédérick Leboyer

Frédérick Leboyer (1918-2017) was the founder of the gentle birth movement. He was the first physician to challenge society’s deeply held beliefs about awareness in the newborn, and his groundbreaking Birth without Violence revolutionized the course of prenatal care and the way babies are introduced into the world. A retired obstetrician who attended more than 10,000 births, he was a graduate of the University of Paris School of Medicine, where he served as Chef de Clinique.

“One of the twenty books that changed the world.”

“Birth without Violence is a work of art, and Frédérick Leboyer is the artist who will have the greatest influence on the health and way of life of the next generations.”

“Birth without Violence is a sensual experience, visually and verbally, as its poetic prose blends with the pictures like the unfolding of a happy dream. . . . The impact is strong, [Leboyer’s] appeal inviting.”