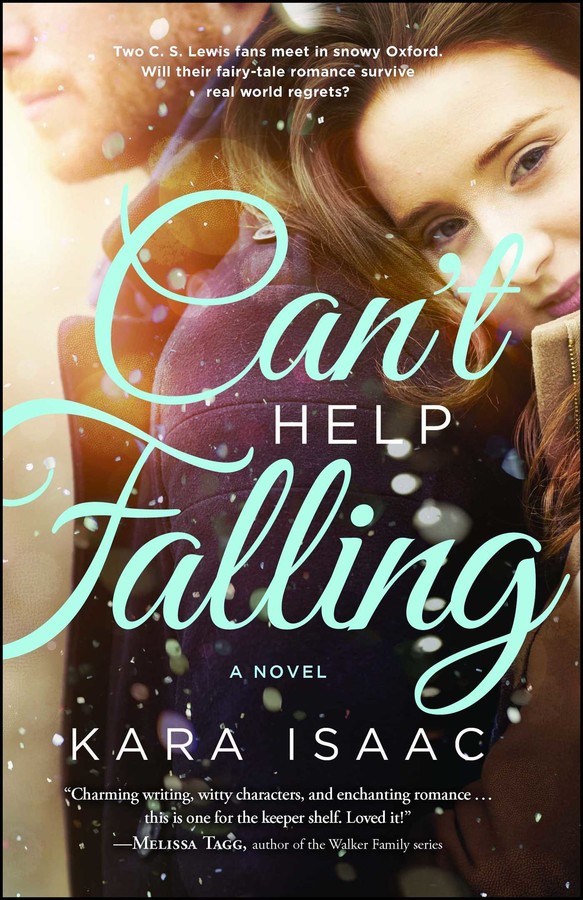 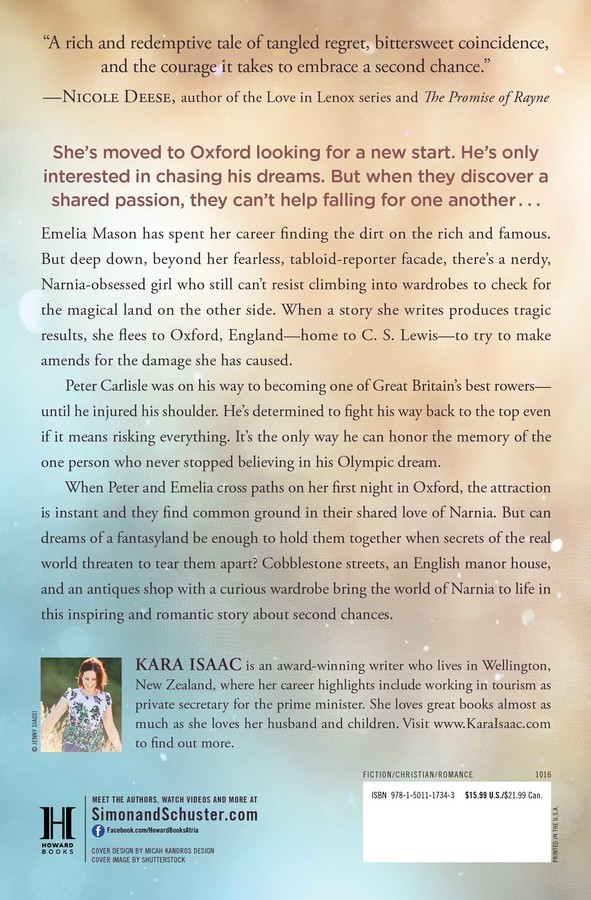 A funny, heartfelt romance about how an antique shop, a wardrobe, and a mysterious tea cup bring two C.S. Lewis fans together in a snowy and picturesque Oxford, England.

Emelia Mason has spent her career finding the dirt on the rich and famous. But deep down past this fearless tabloid-reporter façade, there’s a nerdy Narnia-obsessed girl who still can’t resist climbing into wardrobes to check for the magical land on the other side. When a story she writes produces tragic results, she flees to Oxford, England—home to C.S. Lewis—to try and make amends for the damage she has caused.

Peter Carlisle was on his way to become one of Great Britain’s best rowers—until he injured his shoulder and lost his chance at glory. He’s determined to fight his way back to the top even if it means risking permanent disability to do so. It’s the only way he can find his way past failing the one person who never stopped believing in his Olympic dream.

When Peter and Emelia cross paths on her first night in Oxford, the attraction is instant and they find common ground in their shared love of Narnia. But can the lessons from a fantasyland be enough to hold them together when secrets of the real world threaten to tear them apart? Cobblestone streets, an aristocratic estate, and an antique shop with curious a wardrobe bring the world of Narnia to life in Kara Isaac’s inspiring and romantic story about second chances.

Can’t Help Falling One
IT WAS LIKE BEING IN jail. But worse, because Emelia Mason had paid for it. Nonrefundable. Nontransferable. Not that she hated anyone on the planet enough to try transferring this epic disaster in online booking to them.

Emelia turned around, taking in the full three hundred sixty degrees of the small, dark, cold room. Her breath wafted in front of her. Inside. At four in the afternoon. The space was pretty much bare, save for a rickety desk, an ancient minifridge, a few hangers on a metal stand, and a bed. She suppressed a shudder at the sight of the sagging mattress in the corner. Even from a good six feet away, Emelia could tell it would light up like the Rockefeller Center Christmas tree if a UV light ever came within a block of it.

Well, she’d wanted to reinvent herself. She’d certainly done that. Even if being one step up from homeless hadn’t exactly been in the game plan. Though, after what she’d done, it was about what she deserved.

Stupid, stupid. Emelia still had no idea how she’d managed to book three weeks at the euphemistically named Magnolia Manor, instead of the Magnolia Inn. A mistake she’d discovered when she’d shown up at the latter, only to be told they had no record of her. A review of her furiously waved booking confirmation revealed her error.

Emelia stretched her arms above her head and lifted herself onto her toes. Her fingers scraped the ceiling, dust brushing against their tips.

Brilliant. No doubt in a few minutes she’d be sneezing like Earth’s rotation depended on it.

“Do you need anything else?” The voice coming from behind her clearly said there was only one acceptable answer. Emelia turned around. She hadn’t realized the dour manager had stayed in the doorway. Was watching her with gray, beady eyes.

“No.” Emelia couldn’t bring herself to say thank you. She felt ill just thinking about how much she’d paid to stay in this hole. She had no job. Minimal savings. And when she’d come through the front door, its paint flaking, the greasy-haired woman who had opened it had taken one look at her and pointed at the NO REFUNDS, NO EXCEPTIONS sign that hung on the wall.

Emelia bit the inside of her cheek to stop the tears she could feel welling. It was a room. With a roof. There were worse things in life. That’s why she was here. Squaring her shoulders, she moved to the door and put her hand on the handle, clearly signaling her desire for the woman to leave her alone.

“I finish serving breakfast at eight on the dot.” Even the woman’s English accent was unappealing. Guttural and harsh.

If the room was any indication of the quality of the food, Emelia planned on never ever eating anything served under this roof for as long as she was stuck there. “Okay, thanks.”

The woman finally got the hint and shuffled off down the dim corridor decorated with peeling wallpaper and brown shag carpet that had probably been passé in the seventies.

Emelia had to put her shoulder into getting the door to close properly. The wood finally smashed into the swollen frame.

She dropped her purse on the decrepit desk. The scarred top was graffitied with years’ worth of contributions, most of which were R-rated. Emelia reached inside her bag for her gloves so she could strip the bed without risking contact with her skin. Tonight, she’d sleep in her clothes.

As she pulled out the leather set, a pale pink slip of paper fell out onto the desktop. Her stepmother’s cursive handwriting swirled up at her. An envelope had arrived the day Emelia had left for Oxford. She’d been foolish enough to hope it contained something useful, like cash. But no, all it held was pages of Carolina’s deluded social aspirations.

I really don’t understand your reluctance about Harry. All the benefits of royalty without the responsibility of the crown. And Kate would be your sister-in-law. Just imagine!

Emelia suppressed a shudder as she crumpled the lavender-scented note and tossed it at the trash can in the corner of the room. The pink ball hit the rim and bounced to the floor, rolling across the worn carpet.

No offense to the duchess, who, from all appearances, seemed like a thoroughly decent human being. But given the events that had resulted in Emelia’s transatlantic relocation, her stepmother’s obsession with getting a foot in the door of the House of Windsor was about as appealing as the contents of Emelia’s inherited minifridge. And she hadn’t even opened it yet.

She took a swig from her water bottle as she assessed the disconcerting situation she’d found herself in.

This wasn’t exactly the arrival at Oxford she’d imagined.

But then, her childhood dreams had also included visions of a full academic scholarship to study her literary idols. Living at one of the university colleges. Lectures and tutorials and being someplace where everyone spoke the same language as she did.

Wiping her hands against her travel-worn jeans, she suddenly couldn’t take the silence anymore.

She needed to get out of this grubby room.

She needed to find a wardrobe. 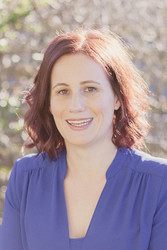 Kara Isaac is the RITA® Award-winning writer of five novels. She lives in New Zealand (yes, it’s really as beautiful as it looks in the movies!) where she spends her time chasing three small people, writing horribly bad first drafts, and wishing you could get Double Stuf Oreos in the South Pacific. Find out more at KaraIsaac.com.

“Filled with grace, beauty, and love… Any book that can make a reader laugh, cry, and get goosebumps of amazement all in the same story is one for the keeper shelf.”

"Enchanting...One need not be a Narnia fan to settle in and enjoy Isaac’s story, which romance readers will easily fall in love with."

"Can't Help Falling is packed with the same charming writing, witty characters and enchanting romance I adored in Kara Isaac's first novel. With a dash of C.S. Lewis and a heartfelt theme of second chances, this is one for the keeper shelf. Loved it!"

"Can't Help Falling is a rich and redemptive tale of tangled regret, bittersweet coincidence, and the courage it takes to embrace a second chance."

– Nicole Deese, author of the Love in Lenox series and The Promise of Rayne

"A new voice on the romance scene, New Zealander Kara Isaac has crafted a sweet and oh-so-original debut romantic comedy that will delight contemporary romance fans, Tolkien lovers and inspy romance readers alike. Add this novel to your TBR stack … and add this author to your 'authors to watch' radar. Recommended!"

– USA Today, on Close to You

– Publishers Weekly, on Close to You

"Allie and Jackson share an immediate chemistry that readers will appreciate from the start. Both have built solid emotional walls that take effort to tear down, which makes for a courtship full of humor, tears and introspection that leads them both back to God."

– RT Reviews (four stars), on Close to You

"A fabulous debut. Well-written, clever, and warm-hearted this love story with the back drop of Lord of the Rings will delight romance readers everywhere. Add Isaac to your favorite's list."

– Rachel Hauck, USA Today Bestselling author of The Wedding Chapel on Close to You

"I can't remember the last time I enjoyed a debut novel so much. Close to You is filled with warmth, wit, and more than a few laugh-out-loud moments! Kara Isaac has proven herself to be an exciting addition to the world of Christian romance."


– Carla Laureano, RITA ® Award-winning author of Five Days in Skye and Under Scottish Stars on Close to You

"Well-written and fun, Close to You made me laugh out loud and fall in love. An enchanting romantic escape into the land of Frodo and Aragorn."

– Susan May Warren, award-winning, best-selling author of The Christiansen Family Series on Close to You

"Close To You is a tasty blend ofunlikely romance, lovably flawed characters, and dialogue just snarky enough tomake me want to pull up a chair and watch. Kara's unique voice and freshpremise combine to create a compelling story that lingers like your favoritedessert long after the last page."

– Betsy St. Amant, Author of All's Fair in Love and Cupcakes and Love Arrives in Pieces on Close to You

"Kara Isaac is a fresh new voice in the world of inspirational contemporary romance . . . and I can't even decide what I love most about her debut novel. The setting, the romance, the wit, I love it all! I especially loved the undercurrent of hope and redeemed dreams. Definitely an author to watch and characters to love!"

– Melissa Tagg, author of From the Start and Like Never Before on Close to You

“Kara Isaac is a fresh new voice in inspirational contemporary romance! Close to You is well crafted, funny, unique, and endearing. A delight!”

– Becky Wade, author of A Love Like Ours on Close to You

"The perfect combination of sweet and sass, Close To You is a charming debut that had me laughing and left me smiling. Well done Ms. Isaac!"

– Katie Ganshert, award-winning author of The Art of Losing Yourself on Close to You