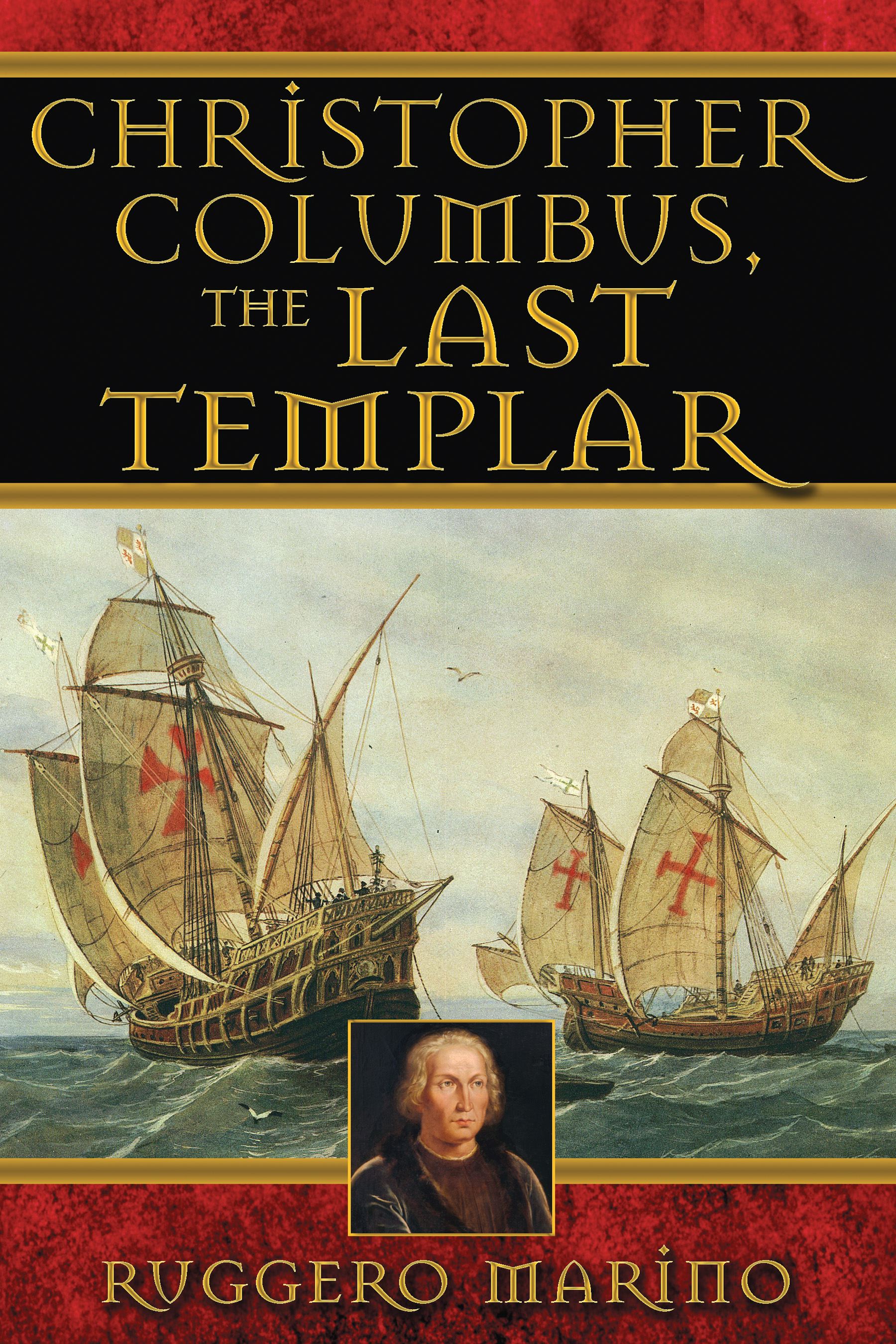 • Reveals how a utopian dream of brotherhood among Christians, Muslims, and Jews fueled a murderous power struggle involving secret societies, popes, and kings

• Shows how Columbus knew, sailing west, he would find the “New World,” not Asia

Was Columbus a Templar? According to the historic documents and maps revealed by Ruggero Marino, Columbus shared their dream of Christians, Muslims, and Jews living in peace in a New Jerusalem, and his voyage across the Atlantic was both to find a new passage to Asia and to find the place where the New Jerusalem could be built.

Marino draws parallels between Marco Polo’s journey east over the Silk Route and Columbus’s sea voyages and reveals that Columbus studied ancient texts and maps from the Vatican Library, access to which was granted by Pope Innocent VIII--who Marino shows to be Columbus’s true father. Innocent VIII (whose own father was Jewish and grandmother was Muslim) was the perfect individual to further the Templars’ plan to create a universal religion combining the spiritual wisdom of the three faiths. Marino shows that Innocent’s “disappearance” and the story that Columbus merely stumbled onto the New World were part of a calculated political and theological cover-up. While King Ferdinand (the model for Machiavelli’s The Prince) and Queen Isabella of Spain are heralded with funding Columbus’s “discovery” of America, it was Innocent VIII who was the main sponsor and master-mind of the expedition. To obscure the purpose of the voyages, and give Spain the credit for the New World discovery, Ferdinand and his agent Pope Alexander VI (Rodrigo Borgia), Pope Innocent VIII’s successor, initiated the disinformation campaign that has lasted for over 500 years.

Nothing is known of Columbus’s youth; his visibility begins with his arrival in Portugal. Surely his relationship with his father must have been extremely important in the formation of his character. This is even revealed by the navigator’s handwriting: polished, perfect, and ecclesiastic in style, in a time when simple sailors did not know how to read or write.

Merely being such a good calligrapher would have been enough to allow Columbus to support himself, and, if this fact is logically assessed, it is sufficient in itself to overturn hearsay. His father certainly could not have been the unknown Domenico of Genoa. Columbus’s provenance cannot be identified with the family to which he is attributed. We can presume, at best, Columbus might have been entrusted to this familial nucleus for some period of time--hence certain “political prizes,” such as Domenico’s appointment to be gate warden of the Porta dell’ Olivella, which would never have been assigned to a mere tavern keeper.

As for the navigator’s upbringing and education, it took place, without a shadow of doubt, in a different house, a different lineage. The man whose perseverance resulted in the completion of four voyages fundamental to the path of humanity probably had the determination of a bastard--one who has a mission to complete, not only for the redemption of Jerusalem but also for the redemption of his own blood.

At this point, the investigation becomes even more intriguing. Merely taking a close look at the statue by Pollaiolo on Pope Innocent VIII’s tomb in St. Peter’s, and mentally superimposing his dark features upon those of Columbus, produces a striking effect, which cannot be simply the product of imagination. The resemblance between the two men is obvious--yet we do not have a definite record of the admiral’s exact physiognomy. The many portraits of Columbus, so different from one another, render him “one, no one, and a hundred thousand.”

Nevertheless, we do know some images are very faithful to the true face of Columbus. These are the ones most resembling the statue of Innocent VIII, even leading one to think they could have been the same person. It is a disturbing realization; Pollaiolo’s red pastel study of the pope’s face, preserved at Florence, looks like a facsimile of some images of Columbus. If we look at Innocent VIII’s profile on the aforementioned poster of the popes, and compare it with the classic portrait of Columbus by Ghirlandaio, it seems almost as if one image were traced from the other: the same face, the same cranial structure, the same Semitic nose. A rare portrait of Aronne Cybo, Innocent’s father, resembles an engraving of Columbus by Aliprando Capriolo to a disturbing degree. The resemblance is equally strong in recently identified portraits of Columbus, such as the one by Pedro Berruguete. More similarities may arise.

The pope had so many unacknowledged children, so many “nephews and nieces.” What became of them? “Nephew” was the term with which the Curia attempted to gloss over the frequent paternity of popes and cardinals. In a Roman edition of Ptolemy’s Geography from 1508, mention is made for the first time of Christopher Columbus in a work “which humanist tradition deems untouchable.” In the small treatise of fifteen chapters, “little known in Columbian literature today . . . the name of Columbus appears many times.” A “Columbus primus” and a “Columbus nepos” are mentioned, as well as lands which either the Portuguese or Columbus discovered, and which were called the New World.

The author of the small treatise, the Celestine monk and mathematician Marco Beneventano, must have been well informed. “Columbus,” he states, “discovered those lands in the company of the Portuguese and not the Spaniards.” Here we see the definite possibility of voyages having taken place prior to 1492. But more importantly, Columbus, whose accomplishments are exalted here, is identified as nepos (the Latin “nephew”).

It is said the surname Colombo was common in Jewish populations in the north of Italy, as was Esposito in the south. It was a reference to abandoned children, who were often left in churchyards, or to the foundlings placed in the rotating wooden containers designed for that purpose, whose birth was attributed to the Holy Spirit (symbolized by a dove = colomba in Italian), the names of the parents remaining unknown. Finally, Colombo and Colón are the translations of the Hebrew Jonah, “perhaps another name for John,” the prophet who predicted the reconquest of the ancient lands of Israel.

It is remarkable, furthermore, that Columbus, considering his many affectionate family ties, to his children as well as his siblings, never remembered the parents attributed to him, Domenico and Susanna. Susanna--the name means lily--was the Hebrew woman, chaste as a virgin. It signifies an unadulterated purity and a woman who has never been a mother in the carnal sense. Meanwhile, Domenico means dominus, the Lord par excellence, God himself. The adjective dominicus is equivalent to “belonging to the Lord,” “dedicated, consecrated, and destined to the Lord.”

These are highly significant names in this puzzle, of which the Christbearer and those who surround him form the pieces: this man, a new Jesus, appears to have been the offspring of a virgin and a son of God, or a man “consecrated to the Lord”--like the men of the Church, and above all, the popes. Domenico, Susanna, and Christopher Columbus are equally symbolic names surrounding the birth of a man without a face, without parents, without a homeland, without a birthday: “from time to time, his origin was Corsican, Catalan, French, Hebrew, without origins (or rather, a foundling), or even a bastard of royal or papal blood.”
Ruggero Marino

Ruggero Marino is a journalist who has worked for Il Tempo in Rome since 1963 and has served as a special correspondent in over 50 countries. He has been researching the history of Columbus’s life and times for more than 16 years, and his first book about Columbus won the Scanno Prize in Italy. He lives in Rome.

“Marino illuminates the spiritual and cultural significance and esoteric roots of the discovery of America by Christopher Columbus. With a scholar’s intellectual discipline, a poet’s eye for creativity, and a detective’s passion for meaning, his extensive historical research and lyrical writing style bring the Renaissance to life.”

– James Wasserman, author of An Illustrated History of the Knights Templar and The Templars and the As

" . . . those who have a desire to uncover more about the mysteries of the discovery of America will be well rewarded."

"This book is worth reading for its great detail on the world of Columbus's time, and the connections among the people involved in the humanist plot to create America."

"Marino expertly analyzes the history and myth of Columbus and his discovery of the New World by drawing parallels between Marco Polo's journey over the Silk Road and Columbus's sea voyages. He reveals that Pope Innocent VII allowed Columbus access to ancient world maps owned by the Vatican to plan his journey, even though rumors were ripe at the time that Columbus was actually a Templar. This is a well-written tome on the legends and rumors that surround the history-making voyage of 1492."