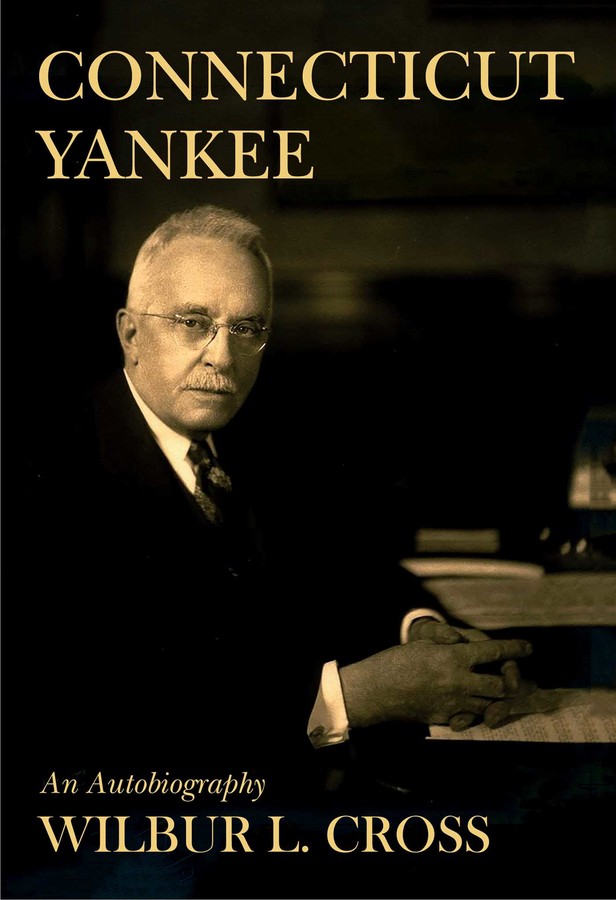 Equal parts nostalgic, witty, self-serving, and frank, Connecticut Yankee is an entertaining and informative memoir of the state and a scholar who shaped it. Connecticut native, Yale graduate, Yale professor and dean, and finally, unlikely Governor of the State of Connecticut during the crucial Depression years, Wilbur L. Cross’s autobiography tells a great American story.

As a Yale professor, a writer, and an editor, Wilbur L. Cross devoted himself to the English language, and specifically to understanding how novels were capable of capturing the human condition. His autobiography, Connecticut Yankee is in many ways a novel itself. The protagonist is Cross and the plot is his education.

Wilbur Lucius Cross was a most unlikely politician. A noted author and literary critic who had been a professor of English, editor of the Yale Review, and finally, Dean of the Yale Graduate School, his quiet character and almost poetic oration would seem at odds with the cut-throat world of state politics.

But is was just this stoic demeanor and inquisitive intelligence, that would help him make a mark on Connecticut politics during his four terms of office, from 1931 to 1939. During his time as governor, he suffered the hardest years of the Depression and worked to implement President Roosevelt’s New Deal, fought for the abolition of child labor, instituted a minimum wage, improved working conditions in factories, and guided the state’s recovery from the devastation of the Great New England Hurricane. He also strove to reorganize the state government, and would help revitalize Connecticut’s Democratic Party, which had been torn by internal strife.

Cross was an excellent writer, and here—updated with a new foreword by Yale Law School graduate and author Justin Zaremby—is his compelling account of life from a childhood in the bucolic town of Mansfield, through the hallowed halls of learning at Yale University, to the highest office in Connecticut.

Wilbur Lucius Cross was born in 1862 in Mansfield, Connecticut. He graduated from Yale University in 1885, then served as principal of Staples High School in Westport, Connecticut, and taught high school English in Pittsburgh, before returning to Yale, where he taught for more than thirty years. He was Dean of the Yale Graduate School from 1916 to 1930. Along with C. F. Tucker Brooke, Cross was the editor of the Yale Shakespeare; he also edited the Yale Review for almost 30 years. He wrote several books, including Life and Times of Laurence Sterne and The History of Henry Fielding, and his several well-regarded books on the English novel helped define the genre of the modern novel. Cross was somewhat unexpectedly elected governor of Connecticut as a Democrat in 1930, serving four two-year terms, from 1931 to 1939. He is credited with passage of several items of reform legislation during his tenure. He also endorsed legislation that authorized funding for the rebuilding of the Connecticut State College, which included the construction of the first campus library, named the Cross Library. After retiring from public service, he continued to stay active in his writing and research projects until his death in 1948 at age 86.