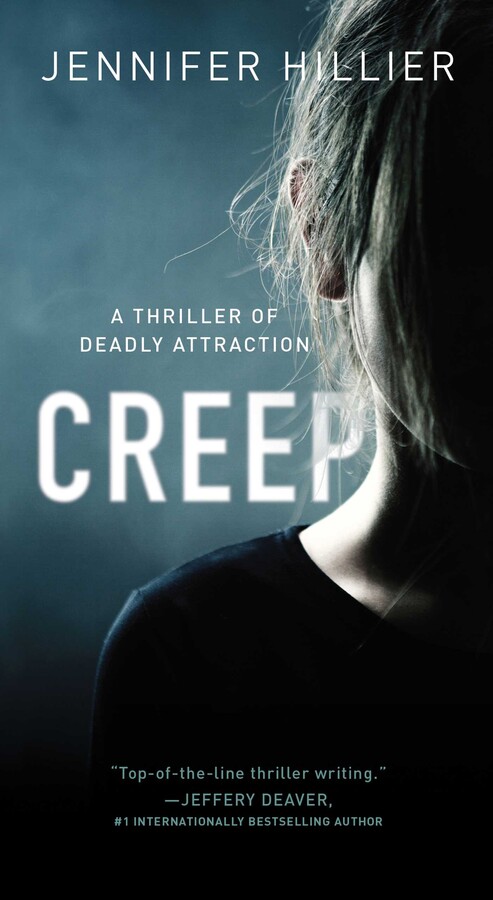 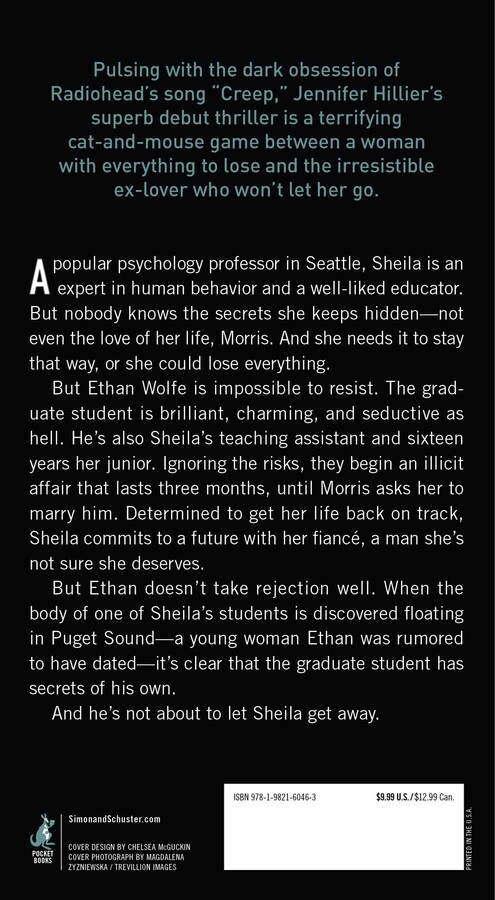 Pulsing with the dark obsession of Radiohead’s song “Creep,” Jennifer Hillier’s superb debut thriller is a terrifying cat-and-mouse game between a woman with everything to lose, and the lover she couldn't resist…who’s now the monster who won’t let her go.

A popular psychology professor in Seattle, Sheila works hard to keep her secrets hidden. On the surface, she’s an expert in human behavior and a well-liked educator, but nobody knows she’s a recovering sex addict in therapy—not even the love of her life, Morris. And she needs it to stay that way, or she could lose everything.

But Ethan Wolfe is impossible to resist. The graduate student is brilliant, charming, and seductive as hell. He’s also Sheila’s teaching assistant, and thirteen years her junior. Ignoring the risks to her career and relationship, they begin an illicit affair that lasts three months, until Morris asks her to marry him. Determined to get her life back on track, Sheila commits to a future with her fiancé, a man she’s not sure she deserves.

But Ethan can’t move on so easily. He didn’t pursue his professor for as long as he did to get dumped for some boring, middle-aged suit. Ethan’s made plans too, and he doesn’t take rejection well. When the body of one of Sheila’s students is discovered floating in Puget Sound—a young woman Ethan was rumored to have dated—it’s clear that the graduate student has secrets of his own.

And he’s not about to let Sheila get away.

The ornately carved 1980 Mathushek upright piano was the only thing left in Edward’s house, and here it would stay. There was no way to bring it with him to the old folks’ home, because the goddamned piano had to weigh at least five hundred pounds.

He would miss it.

Once upon a time, the Mathushek lived in a saloon somewhere in Texas. It was originally a player piano that could belt out seventeen different tunes without anyone’s help, which must have seemed like magic back then. The saloon closed after a Mexican gang shot the place up, and the piano was brought to the owner’s house, where it stayed until he died of a heart attack while fucking his mistress, a former singer in the saloon. The mistress then inherited the piano, and it stayed in her family until her adult grandchildren decided to sell it at auction. By then, the Mathushek was in terrible shape, dented and scratched and out of tune, and it had taken almost a year to restore it back to its original beauty.

Or so the story went, according to the man who’d refurbished it and sold it to Edward Shank thirty years ago for twice what it was probably worth. The guy could have been lying, as most salesmen did. Anyway, who gave a rat’s ass? It didn’t matter now.

The bay window in the living room where the piano sat had a clear view of Poppy Lane, and Edward stood in front of it, smoking a cherry-flavored cigar, watching, waiting. He didn’t have much time left in this house, and after fifty years as its sole owner, the thought wasn’t pleasant. He didn’t want to move out, but at eighty years old, the house was becoming harder to keep up. He was still in good shape, but the fall that had bruised his hip badly a month ago hadn’t helped anything. All good things had to come to an end, and while this was something he understood well, it was also something he dreaded. He could see a faint reflection of himself in the clean window, and there were days when he simply didn’t recognize the thinning mop of white hair and leathery lined face staring back at him.

His hand, still strong but dotted with sun spots, stroked the burl walnut wood of the antique piano lovingly. He traced the rose carvings with a finger that ached from arthritis, his bad hip throbbing slightly, though he refused to sit down. Edward would miss this house. He would miss this piano. Memories of his late wife and daughter were everywhere, and he could still recall the fresh smell of their apple-scented shampoo when he kissed the backs of their heads as they played “Heart and Soul” on the beautiful Mathushek. A lifetime ago. In just a few hours, he would be an official resident of the Sweetbay Village Retirement Residence, and from then on the most exciting thing in his life would be bingo tournaments on Saturday afternoons, and Mac ’n’ Cheese Wednesdays.

He didn’t know whether to kill himself, or someone else.

He sighed. Maybe he’d go for a drive later this week, and go hunting. Hunting used to always cheer him up. He still had his old cabin down in Raymond, though he hadn’t been there in years and had no idea what shape it was in. One day those two hundred acres of densely wooded forest in Raymond would be Matthew’s, too.

Moving away from the window, Edward glanced at the wall above the piano. It was bare now, save for the little scuffs left behind from the various framed photos that used to hang there. He’d already brought all of his pictures over to the old folks’ home—sorry, retirement community for active seniors—but he knew the exact spot where his favorite photo used to hang. It was taken the day the mayor of Seattle awarded him a medal for taking down the notorious Beacon Hill Butcher back in April of ’85. The day Captain Edward Shank had become a hero and Seattle legend. The case, nationally known, had almost single-handedly made his career. You didn’t become chief of police for writing speeding tickets and catching petty thieves. The Butcher had been the case of a lifetime, and he still got requests for interviews about it every now and again.

Though he was alone, Edward grinned, running his tongue over the smooth white dentures that made up his smile.

There was a sizable dent in the corner of the piano, and his sore finger traced the rough edges where the wood had chipped and cracked. The dent hadn’t been there long, and it was a damned shame it existed at all, because otherwise the instrument was in wonderful condition. Marisol, his late wife, had seen to that. She’d been diligent about keeping the Mathushek in tip-top shape, moisturizing it regularly with wood polish and hiring a professional piano tuner once a year.

The ivory keys were slightly worn in places, but still soft to the touch. Edward could play the piano a little, though the arthritis was making it harder. Taking a seat at the leather bench, he rested his cigar on the ceramic ashtray on top of the piano and flexed his fingers. He made it halfway through Beethoven’s Moonlight Sonata before his aching fingers forced him to stop.

Disappointing, but not a big deal. Marisol had been the musician in the family, a graduate of Juilliard and a pianist in the Seattle symphony for a few years. She’d also taught piano right up until the day she died, and Edward had always been content to be her captive audience. Their daughter Lucy had been talented too, only she hadn’t lived long enough to develop her mother’s skill.

His hip burned and he rubbed it gingerly. He stood carefully by the window once more, watching, waiting, six-foot-four frame erect and ready. If anyone strolling down the sidewalk looked up, he or she would see a sprightly eighty-year-old man standing ramrod straight in the window, dressed in a plaid button-down shirt and pressed trousers, cigar smoke swirling around neatly combed silver hair. One must always present himself well. First impressions mattered.

But Poppy Lane was quiet on this rainy Sunday afternoon, at least until his grandson Matthew arrived with the U-Haul and his friends. Matthew was moving in today, and Edward knew his job would be to stay out of his grandson’s way until the young men had unloaded everything. Then he would take the boys out for burgers before heading over to the old folks’ home for good.

Watching. Waiting. Edward had been a police detective for close to forty years, and patience was indeed his virtue.

The white U-Haul truck finally rounded the bend, bouncing down the street, another car following behind it. The boys were here. Soon it would be time to go.

At best, it was bittersweet.

Taking one final look around, Edward’s gaze once again lingered on the antique piano. His eyes misted as memories of Marisol came rushing back. God, how he missed his wife. The house hadn’t been the same without her these past few months. Reaching out, he once again touched the dent on the side of the Mathushek, left there from when he’d smashed her head into it four months ago.

At least he’d managed to get all the blood out of the carved roses before calling 9-1-1, despite his arthritic hands.

One must always be careful cleaning up after a kill.

Jennifer Hillier made her fiction debut with Creep, and is now the author of six psychological thrillers. Originally from Canada, she spent eight years in the Pacific Northwest before returning to the Toronto area, where she lives with her husband and son. Visit her on the web at JenniferHillierBooks.com.

"Hillier will likely have best sellers in the future thanks to her suspenseful plotting and solid character development...this fast-paced page-turner will keep fans of Lisa Gardner and Chelsea Cain guessing." --Library Journal

"An engaging thriller, with the kind of twisted story that makes you a bit queasy even as you can’t look away...Hillier nicely keeps readers on their toes...Psychological thrillers are tough to execute, because their authors must create stories that infiltrate readers’ minds, pulling them into the plots as more participants than observers. Hillier pulls off that sleight of narrative hand with remarkable skill." --Booklist

"As summer reads go, fans are going to have a hard time finding anything as tense, page-turning and bothersome as Creep, a truly frightening debut from Jennifer Hillier." --Suspense Magazine