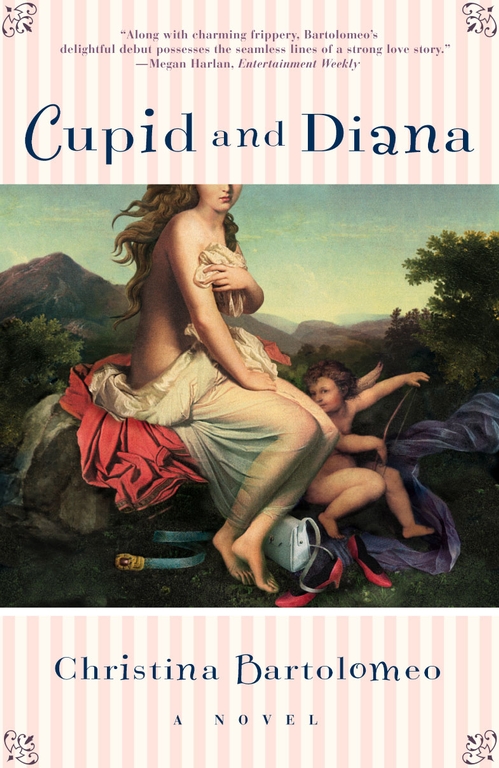 Diana Campanella is the owner of a vintage clothing store in Washington, D.C., teetering on the brink of disaster. She and her blue-blood lawyer fiancé still have not set a date for their wedding. And it's becoming more difficult than ever for Diana to keep the peace in her big, unruly Catholic family.
But just when all hope seems lost, Diana meets a rumpled New Yorker named Harry, who casts a new light on her life and its possibilities. Now all she has to do is decide whether Harry's warmth and great sense of humor is a better bet than the familiar security her fiancé has to offer.

While I ate my lunch, tuna on a bagel, I thought about my mother. She had always been frail -- the family euphemism for "alcoholic." We'd spent most of our childhood caring for her, watching to see that she didn't fall downstairs when she was drinking, bringing her tea and toast during hangovers, making her excuses when she failed to show up for school plays and mother-daughter lunches.
My mother's death was not simple and swift. One May night my father had found her unconscious on the bathroom floor. At first he thought it was just the usual thing. When he couldn't wake her up, efficient men arrived in an ambulance and sped off with her to Georgetown Hospital. It turned out she had a bleeding blood vessel at the base of her skull. They patched that one up, then found another one, and another. All that June and July the doctors discovered time bombs in her head. She underwent three "successful" operations that were later written up in an article for the New England Journal of Medicine, and finally a heart attack -- her exhausted body's way of avoiding further well-meant torture.
But in between, there were many weeks in the hospital. I'd visit her every day. She always asked for the latest fashion magazines. I bought Vogue and Bazaar and Women's Wear Daily, then I started getting the foreign fashion magazines from the international newspaper shop on Dupont Circle -- British and French and Italian Vogue, French Elle, and British Elle. We would go over them page by page, my mother approving or disapproving, examining every detail. After the magazines were consumed, we watched soap operas. She liked to criticize the way the actresses looked. She particularly admired Erica on All My Children because Erica was short like my mother, dressed so well, and had such good posture. "That Erica," my mother would say, "she's got them all fooled."
One afternoon I brought her the Australian Vogue. I was wearing a khaki-green trench coat, I remember, because it was a summer of sudden storms. After the second operation, my mother had had a stroke that played hell with her speech, but I still knew exactly what she thought of the Pre-Raphaelite look favored in the fall runway shows. She thought it was sloppy and ridiculous, while I liked the emphasis on wild hair and pale, pale skin, since my own skin is very pale and my dark hair is curly and unmanageable.
We had a wonderful afternoon. The nurse brought us two Jell-O parfaits on the lunch tray. The soaps were full of incident. When Cynthia came to replace me and I was about to leave, my mother tugged my arm urgently. I leaned down. She whispered, "Green not good on you," in her stroke-garbled voice. Those were the last words she ever spoke to me -- a final motherly gesture.
At the Gallucci Brothers Funeral Home ("Tasteful Funerals for Catholic Families Since 1932"), Cynthia and Francesca quarreled about what my mother's body should wear, even though the coffin was closed. People who have had brain surgery don't make the prettiest corpses. Francesca wanted the brown crepe shirtwaist that my mother kept for funerals. Cynthia favored the ruby-red number my mother had worn for our sister Annette's wedding. It draped scandalously low in the back. No mother-of-the-bride dress for Grace Campanella!
Francesca left orders for the brown dress. But Cynthia sneaked back to the home and countermanded Francesca's instructions. Francesca didn't find out until the night after the funeral. What a commotion that was, Francesca and Cynthia putting away the leftovers and screaming at each other.
They buried my mother at Fort Lincoln Cemetery out in Prince George's County, in a new section at the edge of a field. It had the barren look of a subdivision under construction. Sometimes I worry about her alone out there, with all those newly bought, untenanted graves around her. Sometimes I think about our last afternoon at the hospital, how in the shadow of death my mother had been happy reading her fashion magazines, as if she were about to spring up from bed and go shopping. I try not to think of these things. I hope heaven is a cocktail party full of incident and that my mother is there in her red dress, the center of attention just as she loved to be, holding a perfect martini in her hand.
Copyright &copy; 1998 by Christina Bartolomeo
Christina Bartolomeo

Ilene Beckerman author of Love, Loss, and What I Wore There were times when I was reading Cupid and Diana that I thought I was reading my own diary....I loved it.

Liesl Schillinger The Washington Post Book World Like half-listening to your best friend as she riffs on the subject of her family, job, and man troubles....The result is a sitcom with soul.

Sherryl Connelly New York Daily News Smart and funny...Bartolomeo...and her ruefully funny prose do for clothing what Laura Esquivel's Like Water for Chocolate did for food.