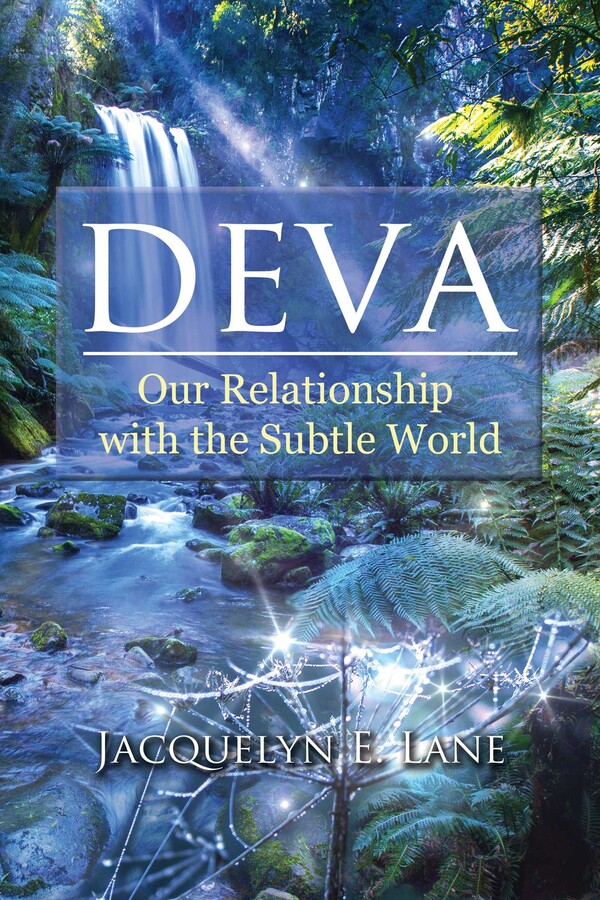 Our Relationship with the Subtle World

• Explains the hierarchy of the Deva kingdom, from elementals and nature spirits to higher angelic Deva and every level in between

• Shares the author’s personal experiences with Deva around the world

Nature spirits, faeries, gnomes, and their higher angelic counterparts who overlight landscapes, mountains, rivers, and plants have held a fascination for people worldwide for countless generations. The Deva kingdom is essentially the world’s form builders, the symphony at the heart of Creation, yet Deva is so much more than the joyful beings that animate what we call Nature. We each have a very personal and direct relationship with Deva via our physical, astral, emotional, and mental elementals, but this connection has been forgotten or, at the very least, overlooked. When we partner with Deva in our everyday lives, we can help evolve both our kingdom and aspects of theirs.

Exploring the realm of Deva and our relationship with them, Jacquelyn E. Lane introduces us to the hierarchy of the Deva kingdom, from elementals and nature spirits to higher Deva and the levels in between. She examines the metaphysics that underlie their existence and how the energy of Deva is intrinsic to all that we experience. Deva is a Sanskrit word meaning “Being of Light,” an appropriate name as Deva sing light out of the primordial darkness to create forms for Being. Sharing her personal experiences with Deva in many lands over four decades, the author investigates our relationship with Deva, in particular via the elementals of our human constitution, and how we can communicate with the Deva of trees and plants as well as the angelic kingdom. Through scientific discoveries and cultural traditions, we discover the impact we have on Deva and how we use and even “create” new forms of Deva via our inventions and collective activity. Jacquelyn also looks at the orchestrating function of higher Deva and the wider implications of our understanding of Deva, including the role of Deva in Pan consciousness--our increasing realization of the intricate matrix of life within and between all the kingdoms on Earth.

Offering not only an in-depth introduction to the world of Deva but also a glimpse of their wisdom, humor, and joy, this book reveals how we can begin to hear their complex song, find our own song, and work with the appropriate subtle layers of the Deva kingdom to grow and evolve.

From Chapter Ten. Deva We Create.

The zone where your astral/emotional field meets your mental field is where sparks can fly, where an idea triggers excitement or thought stimulates an emotional response. Higher still is the zone where concrete reason is met by abstract mind. Here intuition from the realm of soul or higher self plants inspiration and is received as a subtle realisation or a blinding “Ah hah!”

At each such zone different kinds of deva meet, the higher either stimulating or meeting resistance from the lower but always prompting or seeking a response. The zone is not a quiet place for a complacent elemental. The force of emotions triggers responses in the physical body. The force of mental stimulation evokes responses in the emotional body and the force of the higher mind subtly moulds and changes the rational or lower concrete mind.

So, it goes on, up and up, for our existence does not end at the abstract mind and at each level, deva are involved. At each level of activity, be it as simple as wanting to move a hand, as complicated as baking a cake or as complex as finding the answer to a quantum physics puzzle, our will elicits a response from the deva of each appropriate level.

The zone can also be called the “danger zone.” Humans are creatures of habit. It’s easier to live with habit than reinvent our lives every day. Habits make for comfortable elementals. They can respond the same way each time. That guy Jack, he always riles us, so if our astral (emotional) elementals receive a new command, “We will no longer lose our cool when Jack’s around,” what are they going to do? You know that struggle? Those astral elementals are about to bust out and react to Jack but we have a new ruling from a (slightly) higher Will. The zone becomes a war zone with our thought elementals insisting we keep calm and our astral elementals trying to do what they’ve always done when Jack’s around.

We live in a symphony of energies and forces. The edge zones are where the power of a theme multiplies--like when three straight lines form a triangle or people group together to achieve a goal. The power of edge zones connecting is what evokes the effectiveness of group effort and unity. So, here’s the crunch: the process of unifying in an effort to evolve, calls in a higher order of deva that can coordinate the lower elementals.

So, every “body” or “system” be it the organs of your physical body, or the feelings of your astral body, has an edge zone. The “defining edge” of your thoughts is a zone, so is the edge of your personality, which we define here as the sum total of your physical, emotional and mental bodies.
Every organisation--from the bond between couples to the group that studies together, to a business, a bureaucracy or a nation—each has an edge; a zone that interacts with everything around it that it defines as not it. The devic life, the intelligence that inhabits each of these seemingly separate “things” are coming up against the deva life in the other “thing” and behind them all is a will of one sort or another at one level or another. Everything we do is a song and dance of will and intelligence that creates some kind of consciousness.

Deva fill the so-called spaces of the world. When humans understand this, they will realise that even across the apparent vastness of space all things touch each other and all things complete each other. Yet it seems that everything eventually dies--plants sprout from seeds, grow, mature, fruit, and die and all life repeats this cycle of becoming and dying. This perception arises because we cannot see that the creation and cycling of forms is an expression of something that does not come into being and go out of being because it is Being Itself.

What is expressed as Life, is a glorious dance wherein all the ranks of deva respond to some level or other of Will. Deva manipulate matter in response to the force of Will. Like Captain Picard on the Starship Enterprise, Will says “Make it so!” and deva make it so.

When we experience deva as the weavers of Life’s songs, we find ourselves in a sea of colour and light that is constantly moving, creating, building, flowering, changing, breaking down, building up. Movement and deva go together like water and wetness. A healthy land is one where deva radiate, spiral, circle and dance their songs, keeping the currents of life flowing, just as blood flows through the circuitry of our veins.

Deva sparkle the air with prana, spiralling this life energy of light from air into sea, from sky into mountains, across the surface of streams and through the breeze of deserts. Without the movement of deva, the Earth becomes as stagnant as a human body without exercise, prone to obesity and disease. In a healthy Earth, the movement of deva is critical. Nothing is wasted; everything is re-used again and again in different ways, producing different forms in the great experiment of Creation.

A widely traveled New Zealander, Jacquelyn E. Lane is an artist and educator who has been involved in a broad range of metaphysical studies for nearly 50 years. She is the author and illustrator of The Children of Gaia and scribe of This World of Echoes.

“In Deva, Jacquelyn E. Lane presents us with a compelling exposition of the indwelling light of all forms of earthly life--an indwelling hierarchy with eternal descent from highest planes of light to the mundane density of our plane of existence, which still contains the ultimate creative energy to rise again. She poetically brings us into the heart of creative expression itself: joy in the experience of wonder in all things.”

“This book should come with a health warning--May cause uplifting joy in the normally serious reader.”

“Deva is mind-blowingly wonderful and well written. It has been uplifting for me to read on so many levels. I was blown away not only by the incredible experiences that Lane has had and shared in this book but also by the strong and solid arguments it makes and the importance of the subject matter in relation to the many issues we are facing today--personal, political, and environmental. It also gave me a deep sense of feeling reconnected.”

“I am in awe of Jacquelyn E. Lane’s ability to write and describe the intangible. I am left with a presence not easily described--more like a folding in of energy holding the physical body in grace. Colors abound! And joy is felt! I applaud Jacquelyn’s bravery and courage to reveal her inner vision and share with readers such a personal gift. Her discussion of esoteric principles of philosophy is quite an achievement--cosmic Fire in those few pages! Well done!”

“I have thoroughly enjoyed Deva and learned so much from it. Right from the introduction and first chapter, it grabbed my attention with the clear explanations. I felt it was in everyday language and all the author’s examples and tales of her experiences made it easy to relate to. I love the touches of humor too--very refreshing. I certainly have a new understanding of nature and life and look at things differently as I’m driving or walking along and out and about in the world. Understanding this makes a lot of things fall into place. The writing is beautiful, and I can’t wait to read it again and again!”

“This book explains the things in life I was sensing as a young child but unable to express at the time. I was searching for the magic and mystery of life, and your book corroborates my first impressions of it! I really had no idea deva was such a vast subject matter. I think that if people grasped that deva is not just about the fairies in the flowers but a lens with which to understand the nature of reality then they would have a much broader appeal. I enjoyed the way Jacquelyn E. Lane beautifully married science and metaphysics and included her fascinating personal experience with the deva kingdom. I’ve been waiting for a book that covers the history--the how and the why of deva--and you have nailed it.”

“This book gives us an excitement of learning about something we don’t normally see. It opens up a whole world of understanding what is out there and brings an awareness that there is so much more to the concepts of sound, energy, and vibration.”

Our Relationship with the Subtle World