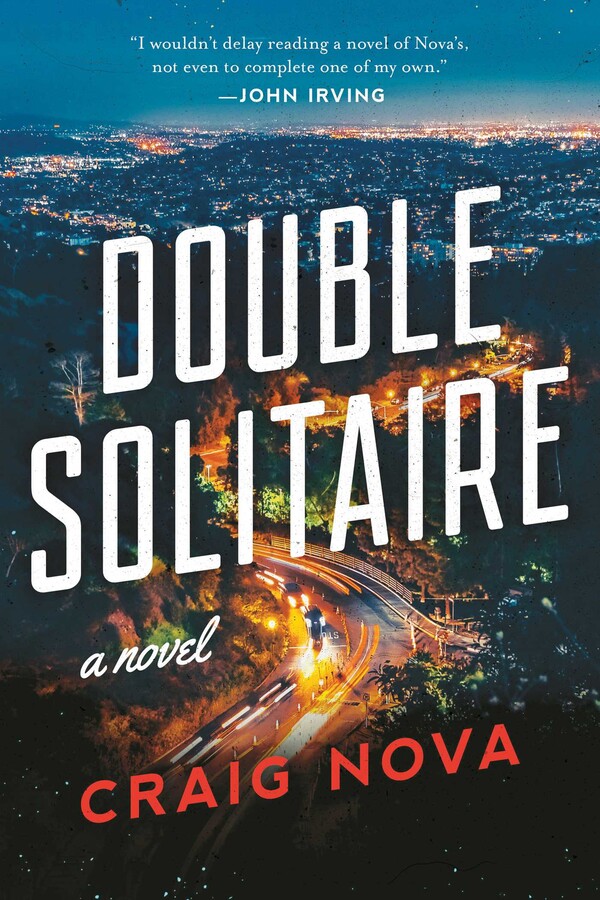 "More than refurbished L.A. Noir. The scenes where Farrell visits with the patients [at UCLA Children's Hospital], canny judges of character and tuning forks for emotional truth, carry devastating weight, and Nova's smooth prose brings the roiling undercurrents to the surface. He's fashioned a series character well worth revisiting. " —The New York Times

Quinn Farrell is a modern-day fixer in Los Angeles — he cleans up other people’s messes. Rich people’s messes. For a lot of money. He’s so good that he’s become indispensable to Hollywood moguls and he’s managed to construct a working moral framework so that he can live with himself. That is until a new neighbor moves next door, Rose Marie, who works with terminally ill teens. Against all his survival instincts, Farrell falls in love with Rose Marie and then her uncanny patients, who shine a spotlight into his soul. When a client steps over the line and Farrell is hired to clean up after a reprehensible crime, his carefully constructed ethical house of cards comes crashing down.

Double Solitaire is the first in a series of LA-based thrillers featuring Quinn Farrell,. As with all Nova’s deeply intuitive fiction, Farrell is an unforgettable living force in a setting that needs no fiction to be any weirder than it is: contemporary Hollywood.

From the New York Times

“Craig Nova’s newest novel, DOUBLE SOLITAIRE (Arcade CrimeWise, 264 pp., $26.99), seems to be bathed in cynicism. There’s a Hollywood fixer well on the road to burnout, a spoiled movie star marinating in ugly secrets, a ne’er-do-well arrested for sex with underage girls, a young British woman running headlong into doom and a Burmese python named Scooter. Yes, a python, whose appearance jolts Farrell, the fixer, out of his own unrelenting miasma and lets the reader see this novel as something more than refurbished L.A. noir.

The snake resides with (but does not belong to) Rose Marie, who is Farrell’s new neighbor and — to their surprise, but hardly mine — burgeoning love interest. Rose Marie works with terminally ill teenagers at U.C.L.A. Children’s Hospital. The scenes where Farrell visits with the patients, canny judges of character and tuning forks for emotional truth, carry devastating weight, and Nova’s smooth prose brings the roiling undercurrents to the surface.

The journey can’t quite move past typical noir thematics, as Farrell must attempt to be moral in an amoral sphere. But that’s no knock, and Nova has fashioned a series character well worth revisiting.”—Sarah Weinman, The New York TImes
"A Hollywood producer hires L.A. fixer Quinn Farrell, the winning protagonist of this excellent series launch...A highly talented stylist, Nova complements Farrell’s moral and existential angst with some trenchant observations on L.A. ... Noir fans will hope to see a lot more of Farrell.” —PW (starred review)

"For readers who enjoy the gritty mysteries of James Ellroy or Michael Connelly.” —Library Journal

“Reading a new Craig Nova novel is thrilling. He’s one of our very best writers, creating characters who walk a knife blade sharpened with bleak humor as they simultaneously act out their dangerously excessive plans. The figurative language in Double Solitaire sometimes immerses us more deeply, sometimes lifts us out of a creepy, convincing nightmare; it’s up to us where we land. When Craig’s not looking at America head-on, it’s in his peripheral vision.  He’s amazing.” —Ann Beattie

“Craig Nova has really done it this time. He hooked me in the first paragraph and reeled me in on page nine. Writing with great style and economy, a master of dialogue and suspense, Nova plumbs the depths of the human psyche. Menace and heartbreak walk hand in hand through these swift pages. I'll take another trip with Quinn Farrell anytime.”—Lee Smith, bestselling author of Blue Marlin

“Nova is a proven master of character and plot, and Double Solitaire—set in L.A. and equal in suspense and intrigue to Raymond Chandler and James M. Cain—doesn’t disappoint.”—Jonathan Harr, author of A Civil Action

“When it comes to creating a believable, suspenseful situation, enlivened by quirky but realistic characters, few writers I know can hold a candle to Craig Nova.  Long admired, by readers and writers alike, for his superb prose, Nova often doesn’t get enough credit for his deft plotting, haunting atmospherics, and unforgettable people.  In Double Solitaire, he returns to Los Angeles, his native territory, and offers a story drawn from that city’s secret alcoves, a tale that perfectly blends dark intrigue and the starlight of love, the ugliness of violence and the beauty of the humane gesture.  I stayed up late to finish this novel, and when I finally set it aside, it echoed in my memory for days, all its complexities and subtleties sparkling like the facets of a gem.  One measure of a fine novel is an apparent simplicity beneath which all the heartbreak and decency of human interaction roils and twirls.  Nova entertains, provokes, enlightens, and educates.  His Double Solitaire is the work of a master at the top of his game.” —Roland Merullo, Author of Breakfast with Buddha, From These Broken Streets, and twenty other novels.

In Praise of Craig Nova:

“I wouldn't delay reading a novel of Nova's, not even to complete one of my own.” — John Irving

“Of the writers writing in America today, Nova is one of the very greatest.” — Michael Silverblatt, the host of Bookworm on KCRW

“[Nova’s fiction] is so powerful, so alive,it is a wonder that turning its pages doesn’t somehow burn one’s hands.” —The New York Times

“I've read no better, no more bitter and ironic understanding of professional cunning and ambition since Joseph Heller's Something Happened. I've read no fuller mixture of human frailties, no more deft revelation of the chinks in moral armor since Robertson Davies's Leaven of Malice. I've read no more comic and painful exploration of the disasters of loneliness since Nabokov's Laughter in the Dark. As a virtuoso handling of first-person narration,The Good Son is as marvelous as Andre Brink's recent A Chain of Voices.…A pitch-perfect performance.” —John Irving, The New York Times)

“The Good Son is the work of an artist in full command, and those of you entering it for the first time can only be envied.” — Jonathan Yardley, The Washington Post

“What sticks in the mind long after the novel has been read, is its intelligence, compassion and — to introduce another old-fashioned idea — character.Craig Nova is a fine writer, one of our best, and if you haven’t read him, the loss is yours.” — Jonathan Yardley, The Washington Post

“The pacing of Cruisers is compulsive and relentless.” —The Boston Globe (for Cruisers,2004)

“Once again, Craig Nova proves that his writing can be just as moving, just as entertaining and insightful, as that of the finest writers in anyone’s literary canon.” —St. Louis Post-Dispatch (about The Informer, 2010)

“Long-awaited is an overused phrase in publisher’s promotional blurbs, but Nova’s follow-up to his acclaimed 1982 novel,The Good Son merits that description as much as any recent fiction, and it has been well worth the lengthy wait.” — Booklist (about All the Good Dead Yale Men, 2013)