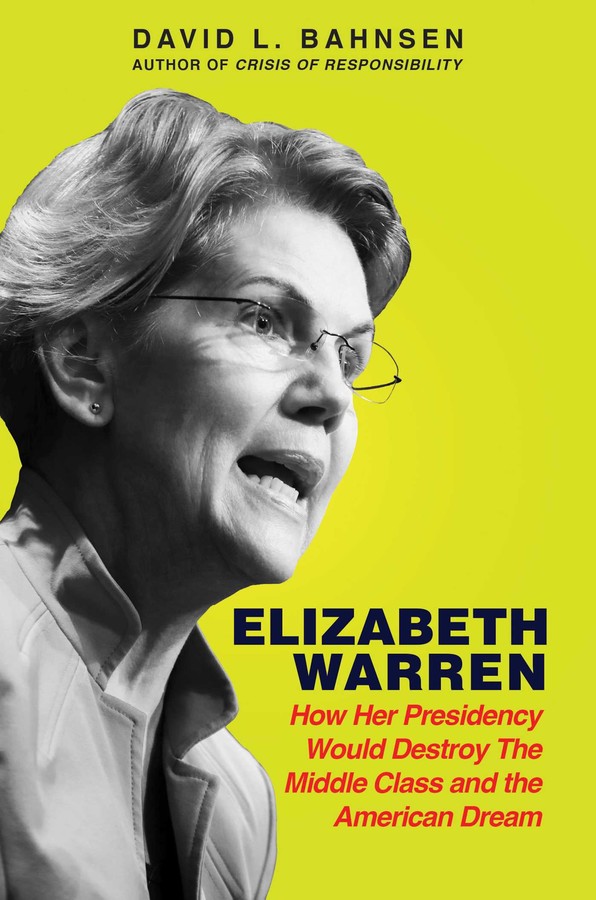 As seen on Fox & Friends, CNBC, Fox Business, and Bloomberg!

Elizabeth Warren is a progressive radical explicitly running on the most anti-American concepts and policies any candidate has ever run on—and may very well be the next President of the United States.

Extreme candidates are nothing new in American politics, but very rarely do candidates as extreme as Elizabeth Warren have such a talent for presenting radically dangerous policy ideas as if they are compatible with the American experiment. An increasing number of far-left progressives have worked their way into the upper echelons of Democratic Party leadership, but none have generated the college campus enthusiasm and media coddling that Massachusetts Senator Elizabeth Warren has created. Yet what belies this Harvard professor’s quirky but compelling presentation style are ideas that, as recently as the Obama presidency, were considered far too radical for American life. Worse, the essence of Warren’s platform undermines the economic groups she most claims to want to aid—the frustrated middle class often on the outside of American prosperity looking in. Far from offering the middle class a life line, an Elizabeth Warren presidency represents the greatest threat to the American dream our nation has ever faced.

David L. Bahnsen is the founder, Managing Partner, and Chief Investment Officer of The Bahnsen Group, a bi-coastal wealth management firm managing over $3 billion in client capital. He is annually recognized as one of the top advisors in the country by Barron’s, Forbes, and the Financial Times. He is a frequent economic and political writer for National Review, Forbes, and his very own Dividend Café. He is the host of the weekly economic podcast, Capital Record, and is a regular guest on Fox Business, CNBC, and Bloomberg.

He is a committed conservative, American patriot, and political enthusiast, and serves on the board of the National Review Institute, King’s College, and Pacifica Christian High School.

He and his wife of twenty years, Joleen, split time between New York City and Newport Beach, CA, and have three children.

"Hot off his brilliant book, Crisis of Responsibility, David Bahnsen turns his keen eye on the crisis that is Elizabeth Warren and her 'plans' to dismantle the free market system. It's a must read for those who want to know what might be in store for America under a Warren presidency. Warren is a peculiar mix of progressive passions and pathologies: the populist technocrat. Rather than a pitchfork, she wields her 'plans,' which have less to do with actual public policy and more to do with making her agenda sound less than radical than it really is. David does a masterful job of pulling back the curtain and exposing Warren's plans for what they really are."

"David Bahnsen combines a cool-eyed sensibility with blessedly jargon-free prose to build an impregnable case against Elizabeth Warren. This is an impressive polemic."

"In this engaging and incisive book, David Bahnsen lays bare the damage an Elizabeth Warren presidency would do to this country. David clearly details how everyone one of Warren's favored policies—from Medicare for All to the Green New Deal and beyond—would bury the middle class in taxes and red tape. This book is a must-read for anyone interested in politics and policy—and adroitly explains what's at stake in the 2020 presidential election."

"What a great political and economic anomaly: The populist Left, championed by Elizabeth Warren, is determined to vanquish wealth—the thing most essential to the investment, productivity, and growth desperately needed to underwrite the evermore ambitious progressive agenda. Here, David Bahnsen, a brilliant financial analyst with a keen political eye, provides the antidote to Senator Warren's nostrums, and a Hazlitt-esque Capital in One Lesson for the rest of us."

"If Elizabeth Warren has a 'plan for everything,' then David Bahnsen has the response. David's book is a thorough, fair-minded, and comprehensive rebuttal to Warren's ideological project. It's a serious response to serious proposals, and it's a vital read for every American who's engaged in the battle of ideas."

"With her relentless insistence that she has 'a plan' for all aspects of American life, Elizabeth Warren has become the poster-child of the Democratic Party's dramatic leftward rush. In this timely book, David Bahnsen dismantles Warren's fanatical agenda brick by brick, revealing it to be ignorant, dangerous, innumerate and, ultimately, immoral."

"If you aren't afraid of Senator Elizabeth Warren, you should be.

She has taken political populism and married it to the powerfully divisive engines of class envy and racial animus. For every real or perceived ill, Warren has a 'plan'—every one of which expands the massive power of government into all aspects of American life, and entails a ruthless program of confiscation to pay for it.

That's why it is important for every American to become acquainted with what she is saying. And that is why it is so important to read David Bahnsen, who clearly tackles her distortions, misstatements, and outright lies.

America was built on e pluribus unum; out of many, one. We are one people, one nation. But if Elizabeth Warren prevails, this unity will be fractured into innumerable bitterly divided camps ultimately controlled by an all-powerful central government.

All Americans should arm themselves with the facts and responses presented in David Bahnsen's Elizabeth Warren: How Her Presidency Would Destroy the Middle Class and the American Dream. This is an impressive and important book."

"Elizabeth Warren: How Her Presidency Would Destroy the Middle Class and the American Dream is a serious, thorough, policy-driven critique of a major contender for the Democratic nomination. Conservatives will read it and fear what's in store for them if she becomes president. Hopefully liberals will read it too, and take its warning to heart."