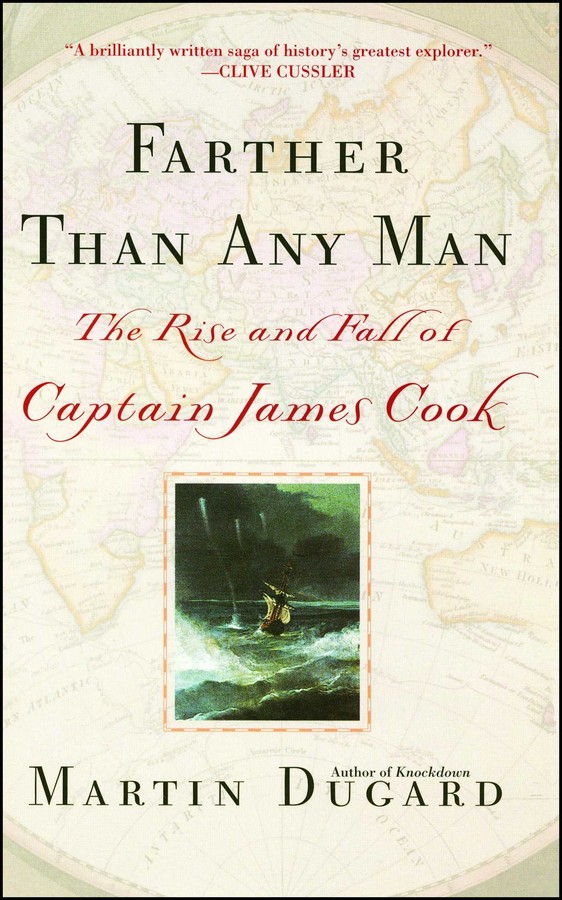 Farther Than Any Man

The Rise and Fall of Captain James Cook

In the annals of seafaring and exploration, there is one name that immediately evokes visions of the open ocean, billowing sails, visiting strange, exotic lands previously uncharted, and civilizations never before encountered -- Captain James Cook.
This is the true story of a legendary man and explorer. Noted modern-day adventurer Martin Dugard, using James Cook's personal journals, strips away the myths surrounding Cook's life and portrays his tremendous ambition, intellect, and sheer hardheadedness to rise through the ranks of the Royal Navy -- and by his courageous exploits become one of the most enduring figures in naval history.
Full or realistic action, lush descriptions of places and events, and fascinating historical characters such as King George III and the soon-to-be-notorious Master William Bligh, Dugard's gripping account of the life and death of Captain James Cook is a thrilling story of a discoverer hell-bent on going farther than any man.

Chapter 1: Land of Hopes and Dreams

The summer had been one of the hottest on record. The Friday-night air was muggy, or "close" as Londoners liked to say, when James and Elizabeth Cook spent their last night together before Endeavour's departure. Through the open bedroom window of their cramped brick row house, the mingled aromas of fermenting juniper from the gin distillery next door and the open sewers of Mile End Road below wafted past the thin curtains. He was thirty-nine, stoic and six foot plus, with shoulders squared from leaning hard into many a rope. She was twenty-six, a pretty, extroverted former shop girl hours away from losing her husband, lover, companion, confidant, and soul mate for three years -- maybe forever.

Seventy miles away, HM Bark Endeavour waited for Cook at the mouth of the English Channel, in the port of Deal. The week before she had been eased from the clutter of Deptford Yard and guided down the Thames by a river pilot. In the morning Cook would travel to Deal by coach. There he would discharge the pilot and begin a voyage around the world.

The bedroom is a private place, and what went on between the two of them that night of August 5, 1768, can only be conjecture. But James and Elizabeth, married six years, were devoted to one another. Their courtship had been whirlwind, with mere weeks elapsing from meeting to marriage. And while he'd spent six months each year charting North America, James was never unfaithful in his travels.

Elizabeth, for her part, was unswerving in the belief that her self-assured sailor was destined for greatness. They endured the separations, knowing that each hard-won assignment was another rung up the competitive ladder of Royal Navy career advancement. Silently, smugly, they ached for those passionate, frantic nights of homecoming. Their three children -- boys James and Nathaniel, and baby Elizabeth -- had all been born either forty weeks after the start of a voyage or forty weeks after Cook had returned home. Now Elizabeth alone would care for them.

On this last night, James and Elizabeth might have dreamed of the time between their next meeting, but they probably avoided discussing the most pressing concern of all: that his profession was one of the most perilous on earth, and even veteran sailors such as Cook weren't immune to the sea's dangers. Whether by shipwreck, fire, cannibals, mutiny, shipboard fighting, scurvy, suicide, or just plain accidental drowning, death occurred to at least a few members of every crew, on every long voyage. To make matters worse, Endeavour would be alone, without a companion ship to rescue James and the crew in case something went wrong. Speaking of these dangers would have rendered James and Elizabeth's last night together maudlin, detracting from the romance of a man and woman hours away from a three-year separation.

For all the anxiety, however, the coming morning held incredible promise. James Cook would not only begin an epic voyage, he would make history. His unorthodox decision to leave a promising career in merchant sailing thirteen years earlier, then start all over again at the bottom of the Royal Navy's enlisted ranks, would finally be validated. He had already become the first man in Royal Navy history to rise from the bottom of those ranks to an officer's commission and command. Now, rewriting the rules for career advancement, he was joining the very short list of men given command of voyages around the world.

Preparation had consumed Cook all summer. Each morning he had ferried across the river, leaving Britain's great symbols -- the Admiralty building, Westminster Abbey, the Tower of London -- behind him on the Thames's north bank. On the south shore, Cook had turned left and entered the East End waterfront tenement and warehouse slums Charles Dickens would someday make famous in Oliver Twist. Walking the narrow cobblestone path, Cook could smell the rot of trash piled in alleys, the stench of urine pooled at the base of walls outside taverns, and almost taste the thick, black grease of cooking oil and smoke. Some days there were riots, too, brought on by the heat and the overcrowded slums. Endeavour and Cook weren't so much setting sail from the chaos as fleeing.

The goals set forth for Cook's journey were lofty and came at a crucial moment for both Britain and the world. The year 1768 was in the middle of what writers were calling the Age of Enlightenment, with mankind shaking off centuries of darkness to embrace learning and reason once again. Science was sexy, peace reigned, and a growing belief in personal liberty was blurring the lines between the upper and lower classes.

Enlightenment or no, however, a handful of nations were behaving as nations had since the beginning of time, jockeying for global dominance. And no nation was pushing more frantically than Great Britain. The tiny island nation (England, Scotland, Wales, Ireland) controlled the seas from India to the Americas. She had recently vanquished archfoe France in the Seven Years' War -- taking full possession of North America, temporarily ending the French military threat they had endured since the Norman Conquest, and even gaining concessions from the argumentative Spanish (who had belatedly joined the war on the side of France), thus rendering the Iberian Peninsula's residents little more than a respected nuisance.

The focus of world exploration in February 1768 was the Southern Hemisphere. Most everything of note that could be discovered above the equator -- save the legendary Northwest Passage -- had been. The Portuguese and the Spanish, then the mercantile Dutch, had seen to that. But below the equator lay vast swaths of mystery. The bumbling but ambitious king of England, George III, devised a plan to send a single vessel of discovery around the globe. The voyage would be hailed as a scientific expedition (and science would truly be a vital aspect of its mission). The greater aim, however, was the discovery and conquest of the legendary Southern Continent -- Antarctica. Since Ptolemy in the second century, the idea of the Southern Continent had bewitched powerful men, burgeoning from the theoretical -- its existence at the bottom of the world was necessary to counterbalance the arctic land mass -- into a mythic opiate promising wealth beyond wildest imaginings. "The scraps from this table," theorist Alexander Dalrymple had written, sure that the Great Southern Continent was bigger than all Asia, "would be sufficient to maintain the power, dominion, and sovereignty of Britain by employing all its manufacturers and ships."

Kings of many nations, and the men they sent to explore for this lost continent, believed so much in this Southern Hemisphere promised land that they somehow disregarded the obvious: a continent so far south was likely to be just as snow-blasted and awful as its arctic counterpart to the north.

Britain was eager to find and colonize Antarctica because she was in danger of losing her lucrative American colonies. Colonial resources were the lifeblood of Britain, providing raw materials to British manufacturers, who then exported finished goods to other nations and back to the colonies. Without this colonial flow, England's great thinkers believed, Britain's international influence would shrivel. As Horace Walpole wrote candidly, "We shall be reduced to a miserable little island, and from a mighty empire sink to as insignificant a country as Denmark or Sardinia. Then France will dictate to us more imperiously than we ever did to Ireland."

America was the crown jewel of Britain's possessions, a bountiful land blessed with dense pine forests for fashioning ship's masts, rich, dark soil for growing tobacco, and thousands of miles of coastal fishing grounds. But that same coastline was the bane of Britain's attempts to collect colonial revenue, laced with the sort of coves and hidden inlets that concealed cargo ships long enough for their haul to be off-loaded and for customs duties to go unpaid. Between 1763 and 1768, the British began cracking down. Militant colonists fought back, beginning efforts to drive the British from America altogether. King George III -- pudgy, with eyes that bulged comically from his head, of limited education but with dreams of a grand legacy -- vowed that scenario would never occur. He said he would rather level the colonies than see them independent.

Prudently, George III began searching for other resources. In 1764 and 1766 he sent major probes into the South Pacific. Each expedition consisted of two vessels traveling together. Neither ventured far enough south to discover any evidence of Antarctica.

As the situation in the colonies worsened, George III placed greater expectations on the next voyage of circumnavigation. Instead of two ships, a lone vessel would make the journey to find Antarctica. The captain of this circumnavigation would have to be bold and eager, given to following orders to the letter, and uncaring that the expedition was, because of the extremely stormy and unknown southern latitudes through which he would sail, likely a suicide mission.

So it came to pass that James Cook, the brilliant, upright, and middle-aged career sailor -- a man of "genius and capacity" in the words of one admiral -- woke on the morning of August 6, bid good-bye to his pregnant wife and three small children, and boarded a coach for Deal wearing his dazzling new blue uniform. He had been plucked from obscurity, granted a commission, and offered command of the expedition. The pain of leaving was tempered by the thrill that Endeavour was all he'd waited for, dreamed of, counted on. Cook had always lived by a self-determined set of rules, and it was finally paying off.

As for preserving the legacy of King George III and ensuring the power of Great Britain, Cook was unaware he'd been so entrusted. His aims were modest -- to fulfill his orders to the letter and return to Elizabeth. He was focused and prepared for the challenges to come, The instant the coach pulled away from Mile End Road, however, his life, and his entire motivation for being, would be forever changed. 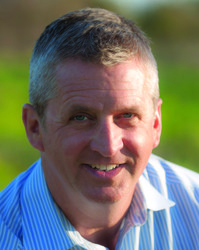 Martin Dugard is the New York Times bestselling author of Into Africa, The Training Ground, Last Voyage of Columbus, and The Explorers. He is also the coauthor, with political commentator Bill O’Reilly, of Killing Lincoln, Killing Kennedy, Killing Jesus, and Killing Patton. He lives in Southern California with his wife and three sons.

Farther Than Any Man

The Rise and Fall of Captain James Cook