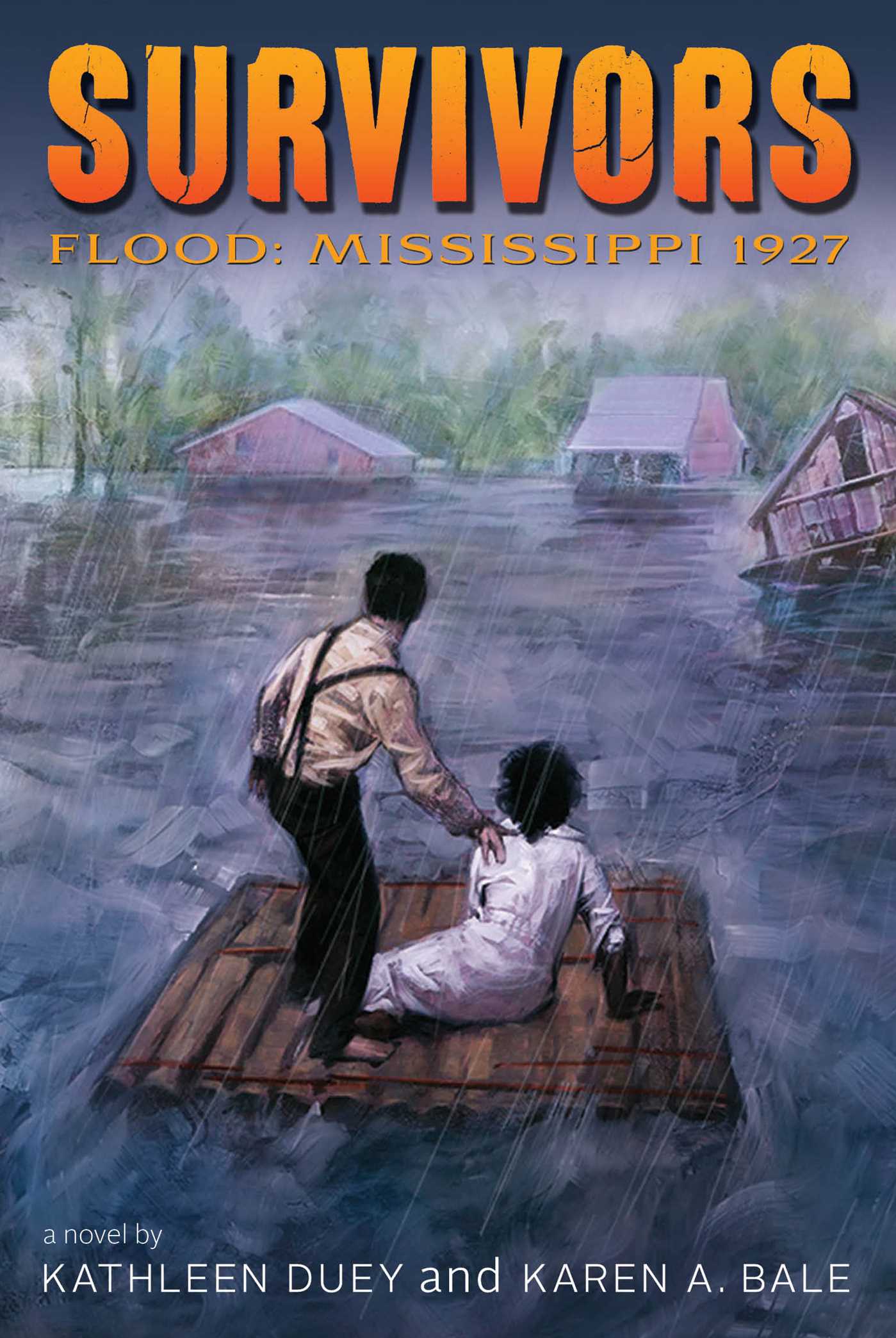 For years, Garret and Molly have dreamed of seeing more of the world than cotton fields and the dusty poverty of their Mississippi Delta farms. They’ve been stashing away hard-earned pennies and nickels in a tin-can bank, hidden deep in the bayou. Now rising flood waters threaten the hiding place of their money, and they set out on their homemade raft to retrieve it.

But the raging Mississippi has other plans, and suddenly Garrett and Molly find themselves in a deadly battle with the dangerous currents and roiling rapids of their debris-strewn river—fighting not for their life savings, but for their lives.

Survivors Chapter One
Molly Bride could hear the river. It sounded like a hard wind. The rain had started again, and her faded yellow shift was wet through, plastered across her back. The path was underwater from the mule shed on. Feeling something sharp stab at her heel, she took an uneven step to the side, splashing brown water on her hem. She balanced herself, reaching out to grip the rain-slick fence rail. She pulled her foot out of the sucking mud, twisting around to look. No blood.

Molly started up the path again, walking more slowly, swatting at the mosquitoes that whined close to her ears. Her family had owned this farm for ten years, and they were still picking up broken glass. The Porter boys had used this end of the farmyard for target practice. They must have shot up a thousand soda pop bottles, learning to aim straight. She sighed and glanced upward, squinting against the rain. Was it ever going to stop?

The wind drove the spattering raindrops against the side of the chicken coop as Molly swung the door open and stepped over the threshold. She was greeted with startled clucking from the rows of low roosts. Pa’s favorite speckled Dominique hen darted out of the shadows, and Molly dodged her pecking beak, then bent to pin her wings and lift her to eye level. “You ought to know better than to try that with me,” she scolded.

The hen struggled, and Molly set her atop the nest shelf and backed up quickly. The floor planks were slippery. The standing water was seeping up from below the floor.

Molly shook her finger at the speckled hen. “You just stay put, now.” She glanced away, then back when she saw the hen spread her wings a little. “I said stay put! You peck me even once, and I’ll throw you out into that storm, and you won’t get warm for a week.”

The hen made a resentful grinding sound and settled, lowering her wings and flattening her feathers. Only then did Romeo, the brown-and-white rooster, come out from under the old corncrib built along the far wall. He approached slowly, marching proudly, his arched tail swinging from side to side.

“You’ll have to wait for Meachum to bring you supper scraps,” Molly told him. “Mama just sent me out for eggs.”

Just as she finished speaking, the wind shoved against the coop again, and Molly felt the planks shudder beneath her feet. The whole shed rocked and trembled. A chorus of squawking rose from the frightened hens. “No wonder you aren’t laying,” Molly murmured as she checked the nests.

She found four eggs in the damp straw. Only four. That would barely be enough for this morning’s griddle cakes. Her mother was going to be upset—and the tawny hen was still missing. Maybe a fox had gotten her. Or she was setting somewhere under the mule shed or the porch, trying to hatch a clutch of eggs.

Molly’s mother had been pretty testy lately. The rain was on everyone’s nerves. Every time they took the truck into town, the water seemed higher. Driving along the top of the levee was strange now. Usually, the river wasn’t anywhere close. You couldn’t even see it through the stands of willow and pine and the tangle of weeds and tye vines that grew along its banks.

Now, the dark brown water had covered all that and come up over the cleared berm. The deep barrow pit at the toe of the levee had filled up weeks ago. Then the water had risen up the slope. The past few days the river had been lapping at the levee road.

Molly gathered her hem in one hand, placing the eggs into the folds of the soft cotton. Careful not to bump them against the coop door, she went out. The wind chilled her and she shivered, stepping back into the cold mud.

Molly glanced across the yard, beyond the outhouse, at the slope that led up to the road. A steamboat had gone past yesterday, hugging the levee for some reason. She had craned her neck to watch it go by, so far above her that it was like looking up at the second story of the jailhouse. If the levee ever broke here, the river would come crashing through the crevasse. . . . She shook her head and forced the thought away.

Molly started for the house, walking slowly, feeling her way up the submerged path. Backwater was widening the bayou and muddying the canebrakes on the far side of the north pasture. She could see the lightning tree from here—or at least the stark, barkless top of it. Garrett had said to meet him there as early as she could this evening so they could work on their raft.

Molly picked her way past the mule shed. It was going to be hard to sneak off. Both her brothers were keeping close to home now, and neither one of them liked her being friends with a white boy. They would have been furious if they had known the whole truth.

She and Garrett were partners. Hidden high in the lightning tree, they had an old molasses jar half full of pennies and nickels and dimes. They were saving up from Garrett’s odd jobs and her sewing and cleaning for Mrs. Spiars at the boardinghouse in Mayersville. Someday, they both wanted to see places like London or Paris, or at least Vicksburg.

The wind gusted, and the cold rain stung Molly’s cheeks. Just then, Meachum came into sight, walking back along the levee road, hunched against the wind. Bedraggled, Skipper trotted close at his heels, his ears and tail low.

Meachum’s lowered head and slogging pace told Molly he was tired. Since he had turned thirteen and started hiring out, he wasn’t nearly as mischievous as he had been a year before. Lawrence, at sixteen, liked to play at being a man. He was starting to order her and Meachum around when Pa wasn’t looking. Though Molly loved her brothers, she sometimes wished for a sister to share chores and secrets with—but Hope was still just a baby.

She looked up, blinking, to see through the rain. Her father was standing on the porch, his hands on his hips. “We were beginning to think you got lost!”

Molly grinned at the teasing in his voice. She heard him laugh before he turned to go back in. She hurried as fast as she dared through the deep puddles below the pigsty and the cowshed. When the path veered up toward the house, she walked faster, mud oozing up between her bare toes.

Meachum made it inside just before she did. As Molly opened the door, she saw him pulling off his wet shirt, hanging it on the clothes wire above the cookstove. Pa was standing close to Hope’s cradle, rocking it gently. Ma had the kerosene lantern hung above the sink. She was adding last night’s coffee grounds to the scrap bucket. The cast-iron pot was already on the stove, steaming. Molly could smell the warm odor of grits cooking. Her mouth watered.

Meachum opened the fire door and shoved in a piece of split oak. “The bayou up along Turner’s place is all right.”

Meachum shrugged. “For now. Lawrence went upriver a little to get a look at the levee. There’s a crew from the Corps up there—”

“Put your trust in the Army Corps of Engineers!” Pa interjected. “I will tell you one thing. The day those ol’ boys tell me to evacuate, I’m going to laugh in their faces. Back in twenty-two they proved one thing to me. It’s in God’s hands, not theirs.”

Molly kept quiet as a mouse in a corncrib. The last thing she wanted to do was get her father going about Major Donald Connolly and all the rest of the bigwigs and their predictions.

“You have the eggs, Molly?”

Startled by the harshness in her mother’s voice, Molly turned. “Only four,” she said, spilling them gently onto her cot.

Her mother frowned and said nothing more as she scooped up the eggs. Molly glanced away. There was nothing to do but wish the rain would stop, and she was already doing that a dozen times a day. Everyone was. Wishing and praying, but none of it was doing any good.

Molly waited for Meachum to step away from the stove before she walked into the little kitchen. Turning her back, she shimmied off her wet shift and took down her dry one. Shivering in her damp slip, she pulled it over her head, then stood close to the stove. This was last year’s dress and it was too tight across her shoulders.

Molly leaned close to the stove, letting the waves of heat soak into her skin. Her mother handed her a wooden spoon and slid the big pot toward her. “The grits are thickening. Don’t you let them scorch.”

Molly started stirring, wincing when the bubbles burst and the hot grits spattered her wrists. After a few minutes, she pulled the pot aside, sliding it across the stove top, away from the firebox. The bubbles slowed.

The door suddenly banged open. A gust of wet wind came in as Lawrence stumbled over the threshold. “The levee,” he managed between breaths. “There’s a little water coming over the top, Pa!”

Molly watched her father run out the door. An instant later, both her brothers followed him, carrying empty feed sacks and shovels and splashing their way toward the river. Her mother was crying.

Kathleen Duey’s works include the middle grade American Diaries and Survivors series, as well as the well-reviewed chapter book series The Unicorn’s Secret and its companion series, The Faeries’ Promise. She is also the National Book Award–nominated author of Skin Hunger. She lives in Fallbrook, California.

Karen A. Bale grew up in southern California and graduated from the University California Riverside. She has written seventeen historical romances, including the successful seven-book Sweet Medicine’s Prophecy series. She has done freelance work for several years, including helping to write two nonfiction books. Karen still resides in southern California, ten miles from the Pacific Ocean.