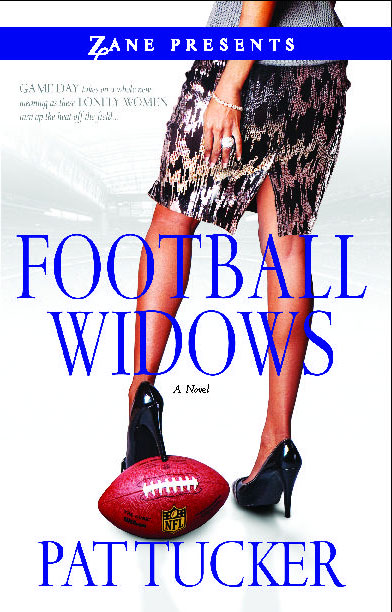 A glimpse into the secret and unique lives of the women behind NFL coaches—game day takes on a whole new meaning as these lonely women turn up the heat off the field.

During football season, when NFL coaches gear up for war on the gridiron, their wives are left to fend for themselves. NFL wife B.J. Almond has had enough. When she walks in to find her head coach husband in bed with one of his assistant coaches’ wives, she is livid. But what really sets her off is when she discovers the other wives knew about the affair all along. Now she’s furious and hungry for revenge. And what better way to exact that revenge than to air everyone’s dirty laundry in a juicy tell-all book!

B.J. knows where all the bodies are buried, and she’s digging up all the dirt. But before she starts writing, she’s running up the score with a lawsuit against her husband and his mistress. Armed with flight records, copies of naughty emails, phone records, and pictures, B.J. isn’t holding back. And neither are the other football wives, who will stop at nothing to keep their dirty secrets from going public.

B.J.’s pretty features twisted into a frown, and a perfectly groomed eyebrow rose. She tilted her head ever so slightly, straining to hear. B.J. needed a visual to go along with the foreign sound. It was so faint; it could’ve been her mind playing tricks. She stepped into her home’s foyer.

The cool, crisp air was a welcomed relief from the smoldering Los Angeles sun outside. Something wasn’t right; she could sense it. Maybe it’s nothing, she thought as she consciously stepped lightly on to the marble floor. In case someone was rummaging through her jewelry box, B.J. didn’t want to announce her arrival. Stranger things had happened.

There it was again!

This time, her heart slammed into her ribcage and her eyes quickly darted around the room. This was no figment of her imagination. She was certain she had heard something. She searched for anything that might be out of place, but nothing appeared to be. Maybe she should’ve grabbed something she could use as a weapon. She quietly closed the door and reached for her cell phone, fully prepared to call for help if needed.

Where could the noises be coming from? The house was supposed to be empty. Her husband’s car wasn’t in the driveway; she assumed he was still at the Los Angeles Sea Lions training camp. Their two young kids were still away with their grandmother so the nanny had been given some time off. B.J. herself was supposed to be relaxing at a resort in Palm Springs.

But it was like some evil force was trying to keep B.J. from her much needed mini-vacation. She and the other NFL coaches’ wives usually took a break before the hectic season began. But this year, things had started off on the wrong foot from the very beginning.

First, Ella Blu, the wife of one of B.J.’s husband’s assistant coaches, and the last person still willing to take the trip, had backed out at the last minute. Ella said her husband, Melvin, had begged her to stay home. Since they were having problems, B.J. figured she’d let Ella slide.

Determined to salvage the trip, however, she decided to head out alone. But then, as B.J. drove down I-10, her tire blew out. When her husband didn’t answer his cell, she was forced to wait nearly two hours for the AAA tow truck driver to come and fix the flat. Once on the road again, it was nearly an hour before she realized she didn’t have any of the paperwork needed to get into the exclusive resort. She reluctantly turned around and headed back home.

By the time she pulled up to her Brentwood home, she wasn’t sure if she even had the energy to venture back out today.

There it was again, that sound. Something told B.J. not to call out as she had started to do when she first heard the faint noise. She placed her designer Hobo on the bottom stair and followed the noises around the cascading staircase and toward the back of the house where the master bedroom was located. The sounds, although still faint, were becoming clearer.

Her steps suddenly became heavy, each more challenging than the one before. By the time she made it toward the hallway that led to her bedroom, B.J. experienced a sudden surge of adrenaline. She could feel a lone trickle of sweat running down her back. Her heartbeat began to race, and her throat suddenly went dry, but still, she cautiously padded toward the bedroom.

“What the hell…” she murmured, struggling to believe her ears.

By the time B.J. reached the door and clutched the doorknob, there was no denying those were sounds of passion that filled the air.

B.J. felt her face burn, and the vein on the side of her neck begin to throb. She swallowed back tears that felt like broken glass gliding down her tightening throat, but she managed a rugged deep breath, then blew it out.

When she finally mustered up the strength to push the door open, her eyes instantly locked on those of a naked young woman who was riding her husband atop her king-sized bed. It felt as if the air had been sucked out of the room as she stood trying to process what she was looking at. B.J.’s mouth fell open, but she was too irate to utter a single word.

At first B.J.’s own voice seemed trapped in her throat. Her eyes narrowed to slits and tears started to burn in their corners.

“I can’t believe this shit!” she spat, finally finding her voice.

“Oh, Jesus!” She heard Taylor, her husband, before she could actually see him.

“Don’t call on Jesus now, you bastard!” Sheer venom dripped from B.J.’s words. “And you!” she hissed toward the woman.

Suddenly, it was like a scene from a movie; everything seemed to be moving in slow motion. Taylor bolted upright and inadvertently shoved the woman to the floor. She tumbled down and quickly began to scramble for cover.

B.J. stood, still trying to comprehend the scene that played out before her eyes. As the wife of an NFL head coach, she’d been through quite a bit over the years, but nothing could’ve prepared her for the heart-wrenching situation she had stumbled onto. Her husband had brought another woman into their bed.

“I can, um, I can explain!” Taylor stammered as he also tried to find cover.

“In our home? In our bed? How could you?!” B.J. shrieked, utterly disgusted. “And of all people for you to stab me in the back with!”

Beside herself, B.J. grabbed the antique vase and flung it toward the headboard.

“You sick bastard!” she screamed. “And you, you backstabbing bitch!”

Taylor ducked and the vase smashed into the wall.

By now, Ella had found her clothes. But she was huddled in a corner crying and shaking as she tried to get dressed.

“You’re sorry!” B.J. screamed and lunged toward her. But Ella was way on the other side of the room.

B.J. was frantically looking around the room as if trying to find something else to throw at her husband. But this gave Taylor time to scramble up from the bed and tackle his wife before she could find another weapon. He cradled her body as she struggled to break free.

Ella quickly got up, stepped over them, and hurried out of the room as B.J. and Taylor continued to wrestle on the floor.

By day, Pat Tucker works as a radio news director in Houston, Texas. By night, she is a talented writer with a knack for telling page-turning stories. She is the author of Somebody Has to Pay, The Cocktail Club, Sideline Scandals, Party Girl, Daddy’s Maybe, Football Widows (soon to be a movie), Daddy by Default, and Lachez (an original e-short). She is the coauthor with Earl Sewell of Loyalty Among Friends and A Social Affair and has participated in three anthologies, including New York Times bestselling author Zane’s Caramel Flava. A graduate of San Jose State University, Pat is a member of the National and Houston Association of Black Journalists and Sigma Gamma Rho Sorority, Inc. She is married with two children.

SEE ALL
See more by Pat Tucker
Thank you for signing up, fellow book lover!