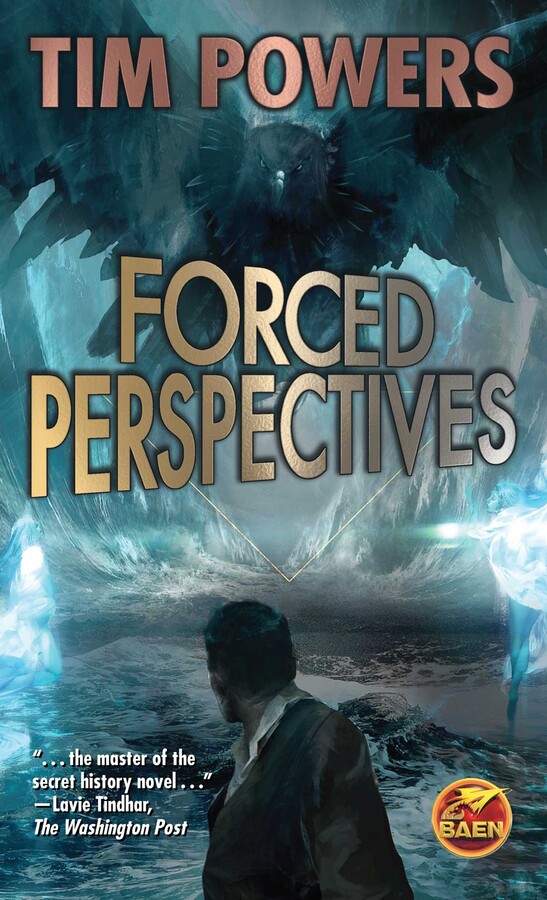 Fugitive federal agents Sebastian Vickery and Ingrid Castine, both sensitive to the ghosts that haunt the modern Los Angeles highways, byways, and secret nooks and crannies, are plunged into the supernatural secrets of the vast city and its history—from the fallout of Satanic indie movies of the Sixties, to the unquiet La Brea Tar Pits at midnight, to a haunted sunken city off the coast of San Pedro seeking to rise again.

They may be old hands at dealing with the spirit world, but they have never been in a pursuit so deadly with the stakes so high. For, if a ghost-addicted Silicon Valley guru has his way, the lost souls of a million Angelenos could be drawn into the creation of a predatory World God guaranteed to bring about the end of life as we know it. And Vickery and Castine are all that stand between it and California-sized destruction.

About Forced Perspectives:
“One book I’ve been hugely excited about is Tim Powers’s latest, Forced Perspectives, set in the magical underbelly of modern-day Los Angeles. Powers may be the master of the secret history novel (and one of the originators of steampunk), but his recent work has really explored the history and magic of Tinseltown in a way no one else can.” —Lavie Tindhar, The Washington Post

“. . . frenetic urban fantasy that playfully blends Egyptian mythology, alternate Los Angeles history, and modern technology. . . . A cast of unusual side characters . . . add color and complexity. This labyrinthine tale of the bizarre and fantastic will grip urban fantasy enthusiasts until the end.”—Publishers Weekly

"...moves at jet speed, along unpredictable paths, and resolves in a fully gratifying melee involving almost every major character, living or dead."—Locus Magazine

About prequel, Alternate Routes:
“Powers continues his run of smashing expectations and then playing with the pieces in this entertaining urban fantasy. . . . This calculated, frenetic novel ends with hope for redemption born from chaos. Powers’ work is recommended for urban fantasy fans who enjoy more than a dash of the bizarre.”—Publishers Weekly

“Alternate Routes is both a thrilling mash-up of science fiction, fantasy, and horror and a work of startling moral sophistication. The horror packs a wallop, and there’s as much in the way of suspense and tension as the reader can bear. Powers takes us on one hell of a ride.”—The Federalist

About Tim Powers:
"Powers writes in a clean, elegant style that illuminates without slowing down the tale. . . . [He] promises marvels and horrors, and delivers them all."—Orson Scott Card

"Other writers tell tales of magic in the twentieth century, but no one does it like Powers."—The Orlando Sentinel

“Powers is at heart a storyteller, and ruthlessly shapes his material into narrative form.”—The Encyclopedia of Science Fiction

“On Stranger Tides . . . immediately hooks you and drags you along in sympathy with one central character's appalling misfortunes on the Spanish Main, [and] escalates from there to closing mega-thrills so determinedly spiced that your palate is left almost jaded."—David Langford

"On Stranger Tides . . . was the inspiration for Monkey Island. If you read this book you can really see where Guybrush and LeChuck were -plagiarized- derived from, plus the heavy influence of voodoo in the game. . . .  [The book] had a lot of what made fantasy interesting . . .”—legendary game designer Ron Gilbert

“Powers's strengths [are] his originality, his action-crammed plots, and his ventures into the mysterious, dark, and supernatural.”—Los Angeles Times Book Review

"[Powers’ work delivers] an intense and intimate sense of period or realization of milieu; taut plotting, with human development and destiny . . . and, looming above all, an awareness of history itself as a merciless turning of supernatural wheels. . . . Powers' descriptions . . . are breathtaking, sublimely precise . . . his status as one of fantasy's major stylists can no longer be in doubt.”—SF Site

"Powers creates a mystical, magical otherworld superimposed on our own and takes us on a marvelous, guided tour of his vision."—Science Fiction Chronicle

"The fantasy novels of Tim Powers are nothing if not ambitious. . . .  Meticulously researched and intellectually adventurous, his novels rarely fail to be strange and wholly original."—San Francisco Chronicle