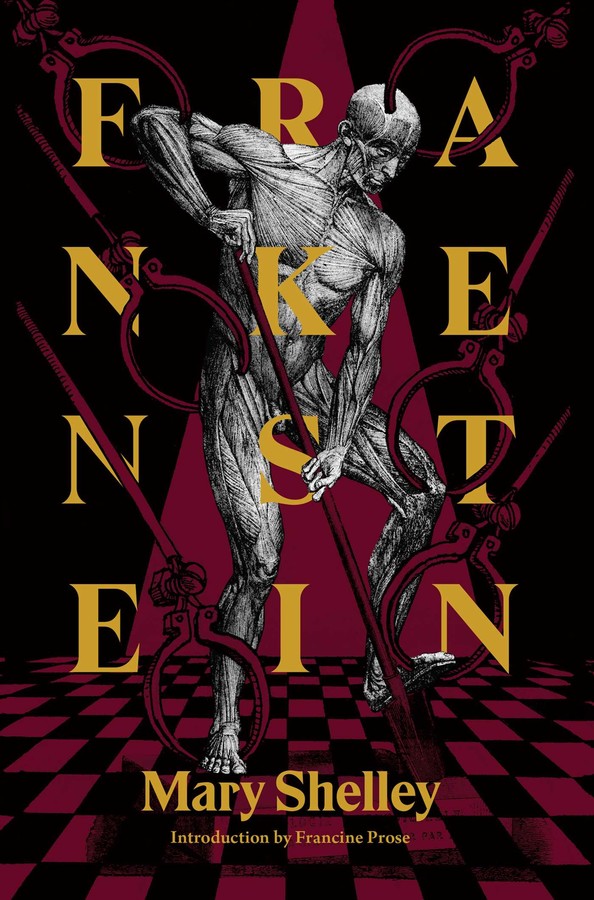 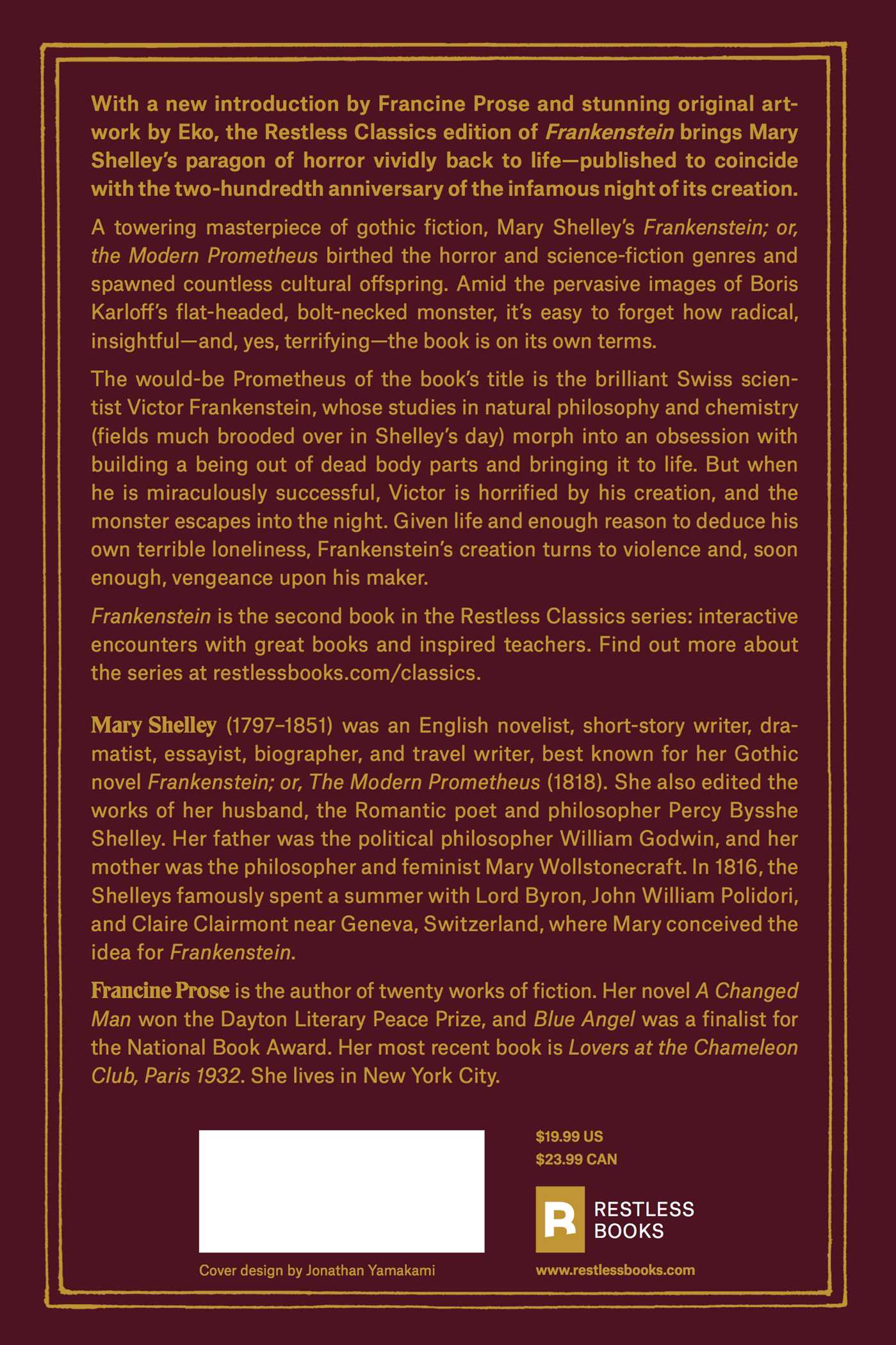 Or, The Modern Prometheus

With a new introduction by Francine Prose and stunning original artwork by Eko, the Restless Classics edition of Frankenstein brings Mary Shelley’s paragon of horror vividly back to life—published to coincide with the two-hundredth anniversary of the infamous night of its creation.

A towering masterpiece of gothic fiction, Mary Shelley’s Frankenstein: or, the Modern Prometheus birthed the horror and science-fiction genres and spawned countless cultural offspring. Amid the pervasive images of Boris Karloff’s flat-headed, bolt-necked monster, it’s easy to forget how radical, insightful—and, yes, terrifying—the book is on its own terms.

The would-be Prometheus of the book’s title is the brilliant Swiss scientist Victor Frankenstein, whose studies in natural philosophy and chemistry (fields much brooded over in Shelley’s day) lead him to become obsessed with building a being out of dead body parts and bringing it to life. But when he is miraculously successful, Victor is horrified at his creation, and the monster escapes into the night. Given life and enough reason to deduce his own terrible loneliness, Frankenstein’s creation turns to violence and, soon enough, vengeance upon his creator.

Frankenstein is the second book in the Restless Classics series: interactive encounters with great books and inspired teachers. Find out more at www.restlessbooks.com/classics.

“Stunning original artwork by acclaimed Mexican artist Eko . . . In her insightful introduction, Prose paves the way into the depths of Mary Shelley’s original horror story, by recreating the journey which led to the birth of one of history’s greatest monsters . . . The new anniversary edition of Frankenstein is a beautiful example of remaking a novel for the 21st century. While remaining true to the spirit of Frankenstein, this new edition strives to introduce the novel to a general audience, with an intriguing new introduction, and stunning artworks that look as though they may have been torn from the dormitory walls of the true Victor Frankenstein.”

“Restless Books has just released a new edition of the original 1818 version of Mary Shelley’s Frankenstein. The 1818 version is, to my mind, far superior to the 1831 revision—which omits the Paradise Lost epigraph and many of the other details . . . The Restless edition includes an introduction by Francine Prose and is accompanied by several videos (available online) by University of Pennsylvania Professor of English Wendy Steiner . . . the videos should prove to be useful teaching tools. The book is also outfitted with study questions, supplied by Steiner, and several illustrations by Mexican artist Eko. Eko’s approach here is intriguing. The illustrations are superposed on reproductions of pages from the 1820 Treatise on Descriptive Anatomy by Hippolyte Cloquet. Moreover, nearly every illustration shows a woman or a scientist (or in a couple of cases what may be the creature with its long black hair) working with the outsized parts of human anatomy. In this way, the illustrations examine in a methodical, protracted manner the very thing that the novel itself rushes through in the matter of mere paragraphs: the actual work in the laboratory. Thus every illustration comes in the form of a palimpsest—the artwork “writes over” the scientific prose, obviating it from view but using it as a platform to explore what Mary Shelley leaves unexplained and perhaps what she felt was impossible adequately to imagine.”

“Two-hundred-years after that rained-out vacation, the work is often celebrated as the first science-fiction novel . . . ‘I think that people are always going to have a certain amount of anxiety, and some of it is very well founded, about scientific process,’ says writer and Bard College literature professor Francine Prose, who wrote the introduction for a newly illustrated anniversary edition of the classic from Restless Books. ‘There are many aspects of science that still make us nervous, and with good reason.’”

“The author seems to disclose uncommon powers of poetic imagination.”

“The relevance, aesthetic and moral, of Mary Shelley's novel only augments as we enter more deeply into an era that already has brought us "virtual reality" and seems likely to confront us with cyborgs . . . Frankenstein contains one of the most vivid versions . . . of the Romantic mythology of the self.”

“Mary Shelley, in the midst of the idealists, gives the dark side to the ideal being, showing us Frankenstein’s monster.”

“How did it happen that this modest gothic tale . . . became caught in a kind of cultural echo chamber, amplifying through the years until, a hundred and sixty-four years later, we have a cereal called Frankenberry . . .  an old TV series called The Munsters . . . Aurora Frankenstein model kits . . .  and a saying such as ‘He looked like Frankenstein’ as a kind of apotheosis of ugly?”

Or, The Modern Prometheus