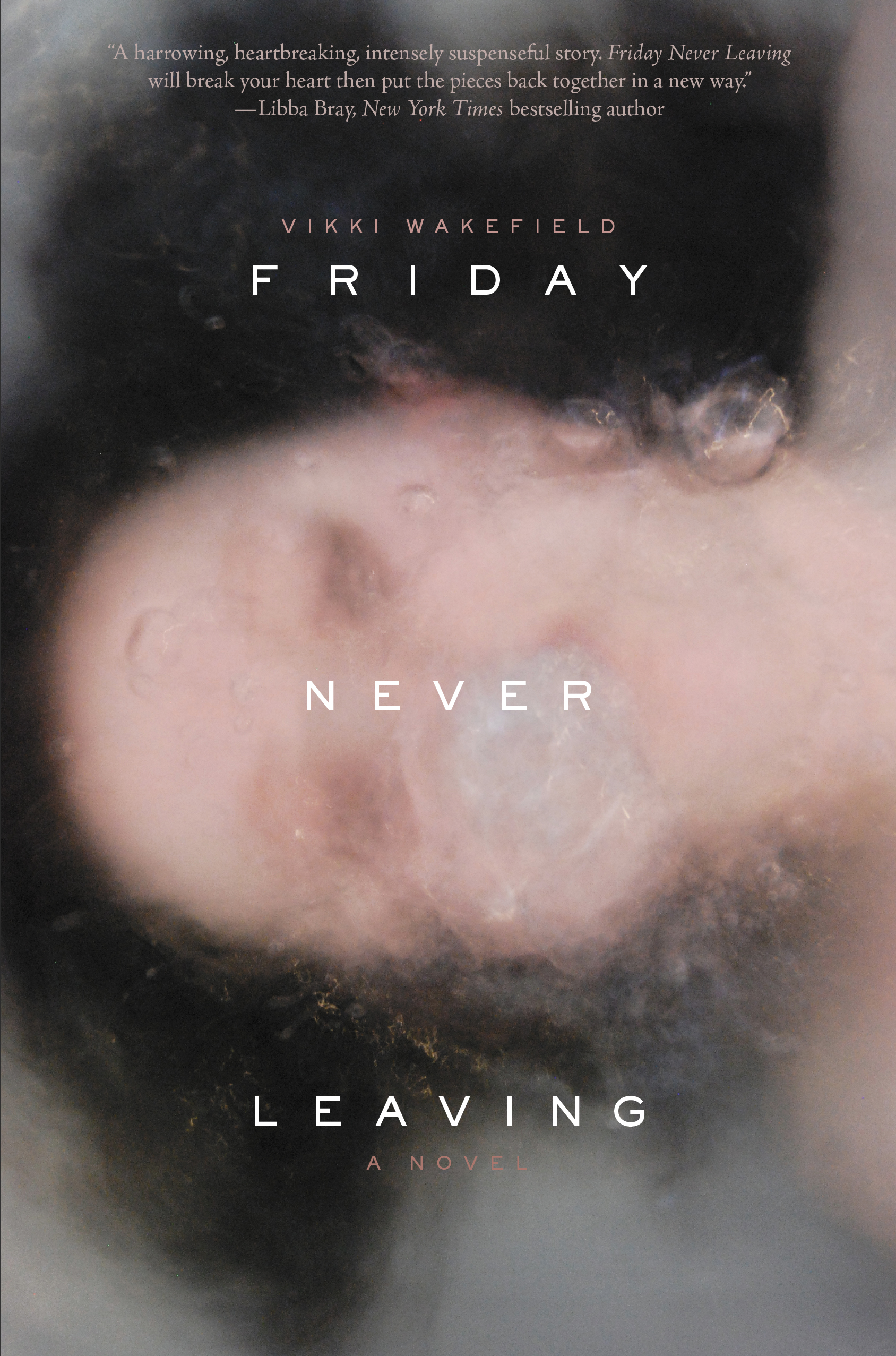 In this wrenching, exquisite coming-of-age novel, Friday discovers what makes a family—and a home.

Friday Brown has never had a home. She and her mother live on the road, running away from the past instead of putting down roots. So when her mom succumbs to cancer, the only thing Friday can do is keep moving. Her journey takes her to an abandoned house where a bunch of street kids are squatting, and an intimidating girl named Arden holds court.

Friday gets initiated into the group, but her relationship with Arden is precarious, which puts Friday—and anyone who befriends her—at risk. With the threat of a dangerous confrontation looming, Friday has to decide between returning to her isolated, transient life, or trying to help the people she’s come to care about—if she can still make it out alive.

Friday Never Leaving CHAPTER ONE
I LEFT IN THE NIGHT.

The clock downstairs chimed the witching hour—gong, gong—and I used the sound to smother the grate of the zipper on my backpack. I laced up my boots and slipped on my fleece-lined jacket. I took only what was mine: my old canvas swag with my pillow and sleeping bag rolled inside, my few clothes, and the photograph, because without it I had nowhere to go.

That photo was my one planned move—after that, life was a lucky dip. The edges were fuzzy and worn thin. One corner was peeling away. The faded image of the man with his arm slung across Vivienne’s shoulder was familiar, not because he was somebody I’d met, but because I’d looked at it a thousand times, trying to picture myself as a hybrid version of the two of them. I looked like Vivienne. She would have been a couple of years older than I was then. Like me, she let her dark hair grow down to her waist and rarely wore makeup; unlike me she was tall and thin as a reed. We had the same gray eyes. But it was a bitter truth when I realized that I wasn’t beautiful like her, that a fraction here or there could be the difference between people staring or being indifferent.

That night, I left a room I’d dreamed about since I was little. A doll’s room, with white furniture and lace curtains. Innocent things. A bed and bookcase and desk that seemed like one creation, flowing from one to the other. You could run a finger along the surfaces and end up right back where you started.

I left the things Grandfather had given me in a sad pile on the desk—a watch that looked too big on my wrist, a laptop computer, a string of pearls, a set of keys.

Every step was deafening. My breathing was too loud, my jeans scraped as I walked. The corner of my jacket caught on the newel post at the top of the stairs. I flailed in space before my hand found the rail with a smack.

I waited for a long minute. From there I could get back to my room—any further downstairs and I risked discovery, and lockdown. I checked behind me, along the dark hallway. Nothing.

The house had wings. I’d never seen anything like it. The east wing, where Grandfather slept, was to my right. The west wing, all my own, to the left. There were seven doors off the west wing and I’d only ever stepped through two of them. The house was too still—it didn’t sigh or shift its weight the way old houses should. It seemed to be holding its breath.

The staircase was a gauntlet of eyes: ancient portraits of men wearing flowing gowns and dusty white wigs. There was only one painting of a young woman. She had the glassy gaze of a reluctant sitter, pearls choking her throat, her nails polished and smooth. It was Vivienne, but from another time. Before. The Vivienne I knew had nails that were bitten and she wore junk jewelry with marbled stones that were like tiny worlds. She never wore pearls. And she could never sit still that long.

At the bottom of the stairs was a room that used to be a sitting room. A lamp was switched on, an unblinking eye, watching. There was the bed where Vivienne had lain for three months while her spirit soared on a morphine cloud, a dent still in the mattress, a groove where her hip bones had dug in, the precious hollow in the pillow.

I couldn’t pass it without looking—but there was nothing for me anymore.

I stepped through the entrance hall on the balls of my feet. Into the dining room with its boardroom table, tinkling chandelier, and an everlasting decanter of whiskey. It seemed never to empty, though Grandfather filled his glass over and over.

For forty-two nights, he and I had sat at each end of the table, as divided as continents, pushing food around our plates. We went days without speaking. Vivienne had taken me back to her father’s house so that she could die and I could have a future, but I wanted to be gone because, without her, none of it was bearable. Everything tidy and polished and civilized—even our grief.

The night air was cold and still. I hoisted my backpack and buttoned my jacket. Grandfather’s cat wound between my legs and beseeched me with lime-colored eyes. I ran my hand along its rippling spine. The feel of it—so alive—made my eyes ache.

I took my hand away and the cat wailed and slashed the air with its tail.

“Shhh!” I hissed and stomped my foot. The gravel crunched underneath.

I looked back at the house.

In another life it could be a country house from an Enid Blyton book—all rambling garden and dappled sunlight and hidden treasure. Fond cousins and lashings of lemonade with the odd mystery and midnight feast. It was a house made for happy endings, but there I was, standing in the dark with a yowling cat, everything I owned crammed into a backpack.

I was the sum of two people, one dead, the other unknown. I’d lived in a hundred small towns and I’d never known another person for my whole life, except Vivienne. Every memory before this was sweet and real. But now she’d got it wrong—this wasn’t my future. Her legacy should be more than a string of pearls and a grandfather I didn’t know. Vivienne taught me that life was short, and if it wasn’t sweet you were in the wrong place with the wrong people.

Time to go, Friday Brown, she’d say, and so the next chapter would begin. Sometimes it would be a whisper in the dark and I would feel her broken heart beating against my back; other times, a casual aside in conversation, as if it had just occurred to her that she had somewhere else to be. We craved new beginnings.

Suddenly the sensor lights flicked on and I was drowning in brightness. I blinked and raised my arm over my eyes. An upstairs window flew up. For a second I saw my mother there, framed in a halo of light, but it was just him, Grandfather, with his old man’s hair gone static and wild. He frowned, fists braced against the sill.

I had the sensation of time winding in a loop.

He stared at me.

I stared at him.

I knew I’d be away before he even got to the landing, but still I felt trapped in his glare.

He lobbed something at me. A bundle, the size of a half brick, that fell short and tumbled to my feet. He nodded at it and regarded me carefully as if what I did next would give him some measure of me.

I picked it up, felt its weight in my palm, caught the scent of new ink. A wad of fifties, bound in rubber bands. Hundreds of them, probably more than ten thousand dollars. I thought of Vivienne—turned away from here with nothing, my lifetime ago—and I made my choice. It was a choice based on stupid pride and dumb loyalty, and it would change everything.

I threw the bundle onto the porch, turned my back, and started walking.

I had a purse with my own money. Enough to start over. If there was one thing I knew—one thing I could do without a map, with my eyes closed and my hands tied behind my back—it was starting over. Except this time I had to do it on my own.

The sensor lights flicked off.

Clouds of breath, numbness in my fingers and toes. A pale slice of moon threw a sickly light, just enough to see by. When I reached the front gates, I looked back.

He was gone. The windows were dark and shuttered.

Vikki Wakefield is the author of three award-winning novels: In-between Days, Friday Never Leaving, and All I Ever Wanted. She lives in Adelaide, Australia. Visit her at VikkiWakefield.com.

"The themes and subject matter may be dark…but this is far from being a novel without hope."

"Full of elegiac beauty and intelligent insights…this is a stunning contribution to young-adult fiction."

"Wakefield’s characters are one of the strengths of this young adult novel. They are diverse, compelling, multi-dimensional, loveable, despicable….believable."

"This is a pull-no-punches story about learning the truth and growing up, full of the preciousness of friendship and love."

"Mesmerizing, embroidered with terrifying webs of intrigue and haunted by ghosts."

*Australian author Wakefield spins a tense, multilayered tale about loyalty, memory and survival... Imagery—a dust-filled ghost town, harrowing dreams of drowning—is vivid and evocative, and Friday’s changing sense of herself and her relationship to her mother’s legacy give the story another layer of depth.

"Friday Brown may have left many places throughout her lifetime, but Wakefield's fantastic story is never leaving me. This book is for fans of Libba Bray and Martine Leavitt."

"Friday's battle with grief and inheritance is tense and evocative from first page to last."

"In her American debut novel, Australian Wakefield reveals herself to be a master of madness and suspense, rivaling such authors as Adele Griffin and Neal Shusterman....Wakefield’s writing is gorgeous. She renders the Australian setting, from the slanted platforms at the train station to the red dust of the outback, with visceral detail, and her characters are disturbing, yet sketched with deep compassion for their lonely, wounded hearts.

"Lyrical prose traces her [Friday's] path from lonesome grief to empowering connectedness, and it’s clear that coming to terms with the story of her past will ultimately free her to write the story of her future."