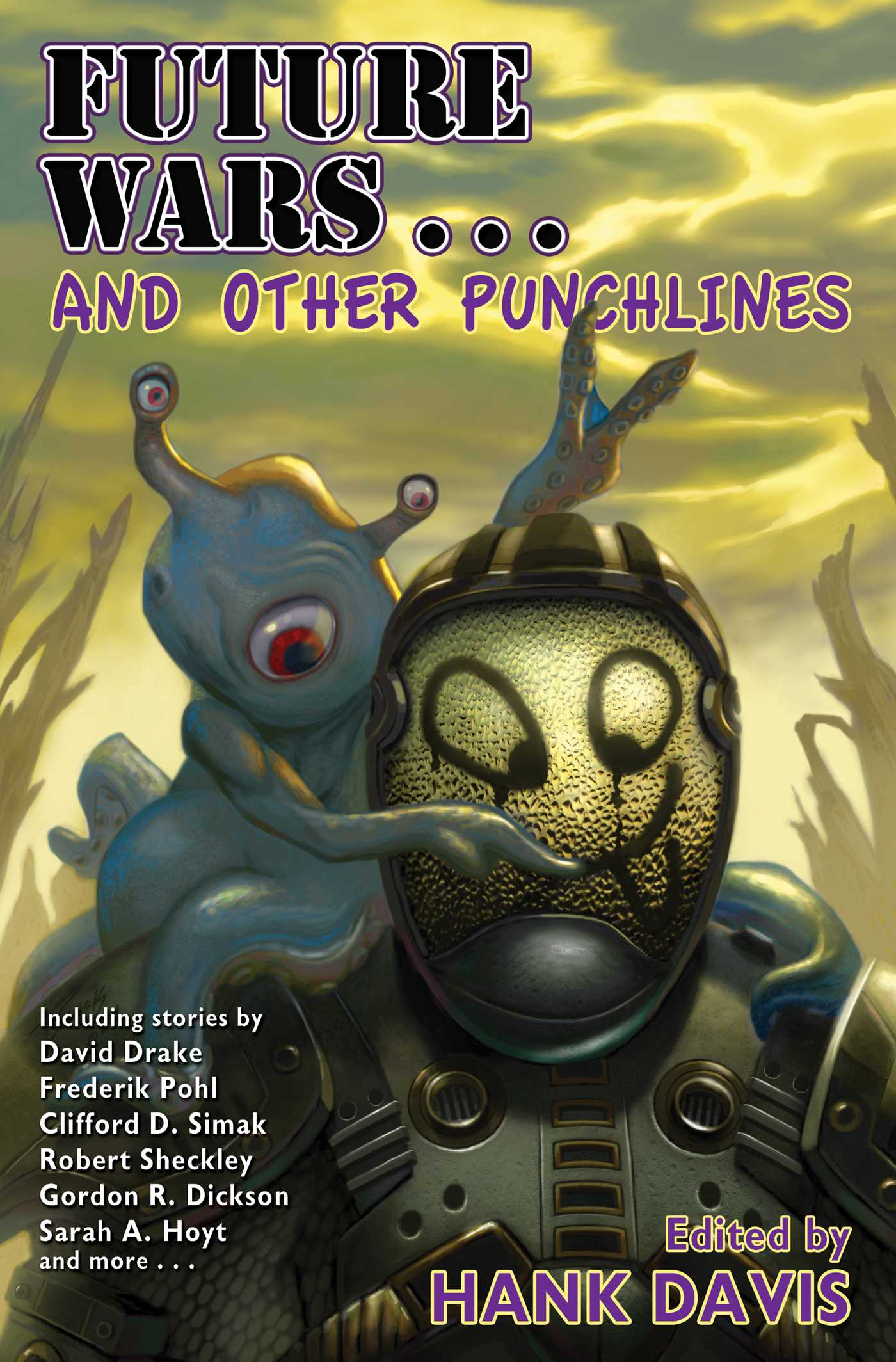 Future Wars . . . and Other Punchlines

CATCH-22 IN OUTER SPACE?
War, as the general said, is hell, but it also has its humorous moments, though the humor may be grim, and you “had to be there” to get the joke. War is likely to continue into the future, and into space, no matter how many idealistic speeches are made and U.N. sponsored treaties get signed, and so will the wartime jokes, ranging from slapstick to gallows humor. And if “you had to be there” to get the point, some of the best writers in science fiction are on board to put you there . . .

David Drake, the Dean of military science fiction, turns to fantasy and shows the result of having a combat balloon manned by halflings of dubious competence.
Frederik Pohl tells of the invasion of Earth by aliens with impenetrable force shields, and how a goldbricking soldier with all the ethics of a career politician became an unlikely (and unwilling) hero.
Herbert Gold considers the lighter (?) side of the strategy of M.A.D. (Mutual Assured Destruction).
Theodore R. Cogswell, in a story which the Science Fiction Writers of America voted into their Science Fiction Hall of Fame, presents an isolated planet’s outpost, left behind after the collapse of galactic civilization, and the psychological subterfuge that kept morale from failing.
Steven Utley and Howard F. Waldrop, in a Nebula Award and Locus Award-nominated work of alternate history, report on General George Armstrong Custer’s ill-fated mission when he and his dirigible-borne paratroopers were attacked by Chief Crazy Horse’s biplane squadron.
Christopher Anvil shows that when aliens with overwhelming technological superiority invade Earth, their campaign can completely unravel because the local conditions are nothing like those back home. (A tornado is just moving air—how could that be dangerous?)

About  Future Wars . . . and Other Punchlines:

"A question at science fiction conventions has long been "Can you combine humor and science fiction?" The answer with "Future Wars... And Other Punchlines" is an overwhelming yes". Hank Davis has collected some of the finest short stories that do both, tell good sf while being very funny. Some of the authors he has included are Frederik Pohl, Clifford D. Simak, Gordon Dickson, David Drake and Sarah A. Hoyt. A special mention has to be given to Fredric Brown who was a master of the shorter short story that many times was only one page. He is included here with "Sentry" Like many of his works of sf there is a surprise ending that is memorable. "Future Wars... And Other Punchlines" is great fun for anyone who likes to read short stories."—Midwest Book Review

Future Wars . . . and Other Punchlines