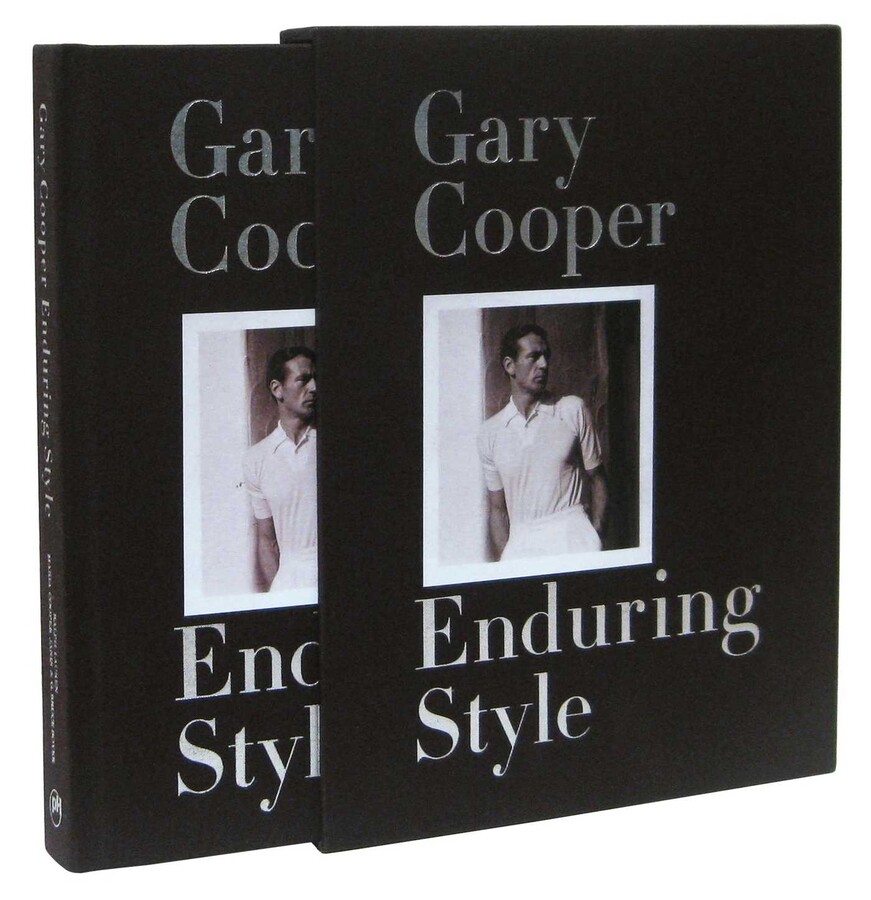 Dressed up like a million-dollar trouper/
Tryin' hard to look like Gary Cooper/ Super duper
-"Puttin' on the Ritz," Irving Berlin (revised lyrics, 1946)

In 1946, when Irving Berlin revised the lyrics to his 1928 "Puttin' on the Ritz" to include those memorable lines, Gary Cooper had been a star for over 15 years, and it would have been hard for most men to look as super duper. He conveyed a straightforwardness and an honest, American handsomeness that seemed to both ignore and rise above the contrived glamour and studied posturing that had characterized so many other film heroes of those early years. No matter what costume he put on, he looked like he owned it. The camera loved him, and so did the box office.

But costume is one thing, and clothes are another. In his private life, and in those many early films where he wore contemporary clothes, he had devised and perfected his own debonair style that combined a perfectly tailored European wardrobe with all-American casual sportswear to produce the first, and still finest example of elegant, international, masculine style rooted in an American ideal of the everyman as hero. From the most casual sports clothing to the most formal white tie and tails, Cooper carried himself with uncontrived conviction.

Gary Cooper: An Enduring Style is the first ever monograph focused on the timeless fashion and allure of this leading man who was a fashion inspiration to his Hollywood peers, clothing designers then and now, and generations of stylish men of every social strata, across the globe. Compiled of unpublished, never-before-seen personal photographs, shot primarily by his wife Rocky, Gary Cooper captures the cars, the mansions and ranches, the guns and gear, and of course the endless outfits for every occasion that this Hollywood icon ensconced himself in throughout the years. Whether hunting with close friend Ernest Hemingway, lounging with Cary Grant, horseback, poolside, or on the beach, on-set or after-hours, in the company of royalty or cowboys, Cooper had the perfect outfit for every occasion, embodying a type of refined masculinity rarely seen and in high demand to this day.

G. Bruce Boyer has been a noted fashion writer and editor for more than 35 years. He was associated with Town & Country magazine as men's fashion editor for 15 years. His articles have also appeared in Esquire, Harper's Bazaar, The New York Times, The New Yorker, and many other publications. He is the author of multiple books on the subject of men's fashion and has also worked in advertising, PR, and media consulting for companies such as Nordstrom, Polo/Ralph Lauren, Southwick, Bergdorf Goodman, and Gant among others. Maria Cooper Janis was born in Los Angeles and grew up there with her parents, the actor Gary Cooper and his wife Veronica Cooper. A talented painter, a noted philanthropist, and a filmmaker, Maria married the world-renowned concert pianist, Byron Janis, in 1966. Ralph Lauren is the Chairman and CEO of Polo Ralph Lauren, a global lifestyle brand representing the best in American design. Lauren's career has spanned four decades, during which he has cultivated the iconography of America-whether it is a reflection of the New England coast, Native American culture, or Hollywood glamour-to create one of the most widely recognized families of consumer brands, worldwide. Ruth Ansel, art director, designer, and lecturer has collaborated for over four decades with photographers, illustrators, and artists such as Richard Avedon, Andy Warhol, Peter Beard, Bruce Weber, and Annie Leibovitz. She was the youngest co-art director of Harper's Bazaar magazine in the 60s. She then went on to art direct The New York Times Magazine in the 70s, House & Garden and Vanity Fair in the 80's, and Vogue. In the early 90's she formed her own design studio where she continues to design magazines and books, including a master monograph for Taschen by Peter Beard. A book called Hall of Femmes about Ruth and her celebrated forty-year career was published in 2010. Ruth was the recipient of The Art Directors prestigious 2011 Hall of Fame award.