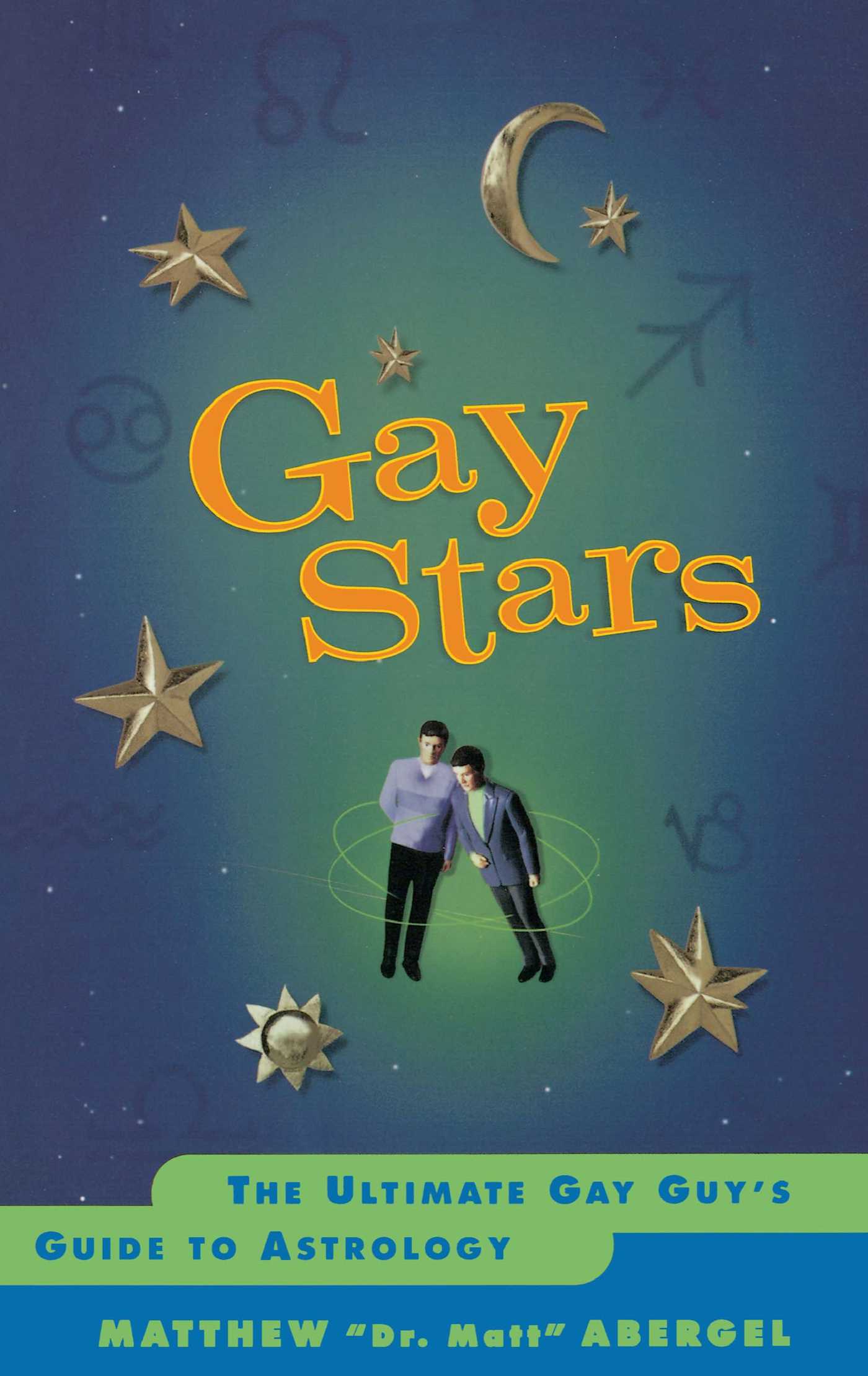 The Stars Are Out!
Why have so many Geminis become famous gay authors? What makes Aries actresses some of our favorite bitchy role models? More important, how can you seduce that aloof but oh-so-yummy Aquarius waiter at the local café? Open up Gay Stars and explore these mysteries among the stars.
Showcasing the gay characters and stories that the Zodiac features every night in The Great Cosmic Soap Opera, Gay Stars includes in-depth character sketches illustrating every sun sign, as well as practical insights and advice on using astrology to improve those aspects of life that most concern gay men -- like sex, relationships, and spiritual growth. Sprinkled throughout are quotes and portraits of gay icons and heroes, providing entertaining and inspiring examples of astrology at work. Gay Stars is your star-studded tour through the fabulous universe of gay culture.

In the Beginning, There Was a Poof!

A long time ago, in a galaxy very, very nearby, a runaway meteor crashed into a small planet. Poof! In a cloud of smoke and gas, the meteor sprinkled the oceans with organic molecules, the stuff that life is made of. Pretty soon, over the next few billion years, the planet was hopping with amoebas and jellyfish, penguins and elephants, Neandethals and disco queens.

If scientists are right -- if life's original ingredients came here on a star-sprinkled meteor -- that makes all of us intergalactic hitchhikers. Gypsies from outer space. A whole planet of disoriented Dorothys seeking the Wizard of Oz. This means that we are, in fact, the children of stardust, planted here for God only knows what purpose.

So if we come from the stars, do we continue to have a relationship with them? That's the question humans have always asked, in many, many ways. Of these ways, the oldest and most enduring is astrology. As old as civilization, maybe older, astrology studies and interprets the relationship between us and the stars we come from. It's part science, part imagination, and totally fascinating.

The Greatest Show in the Universe

Forget the circus. Turn off the TV. Put away your Barbra CDs -- yes, even your Barbra CDs. You've got front-row seats for a show that's been playing a lot longer than Cats or I Love Lucy. It's the Great Cosmic Soap Opera, and you're not only a spectator -- you're the star of the show. All of us are.

Gaze at the stars. Look at the moon and planets. Up in the sky, the most spectacular performance takes place every night. Long before Broadway or Hollywood, the stars captivated nearly every human culture. These cultures recognized that the stars were telling stories about our lives on Earth. These cultures listened to the stars for news and important events. They watched the stars dramatize myths, values, and dreams.

Gay culture is no different. Our stories are told in the stars -- they always have been. But modern astrology has generally overlooked gay interpretations, just as mainstream culture has frequently overlooked, suppressed, or stereotyped gay culture. One popular astrology book, for example, asserts, "The problems of homosexual tendencies and homosexual panic run rampant through these times of permissiveness." Hmm, I didn't realize it was a problem!

Anyway, it's time to change all that. Our culture has come a long way since Stonewall. We've learned to appreciate gay contributions to world art, history, literature, music -- the works. Likewise, we need to rip astrology's closet door off its hinges and reclaim our stories in the stars.

The Stars Are Out!

Why have so many Geminis become famous gay authors? What makes Aries actresses some of our favorite bitchy role models? More important, how can you seduce that aloof but oh-so-yummy Aquarius waiter at the local cafe? Open up Gay Stars and explore these mysteries among the stars.

This book showcases the gay characters and stories that the zodiac "performs" every night -- what I like to call The Great Cosmic Soap Opera. Like a play, Gay Stars is divided into two sections:

1. The Cast of Characters: With in-depth character sketches, this section illustrates your sun sign -- and all the rest -- in terms of archetypes familiar to our culture, drawn from the movies, books, and plays we love -- or love to hate. To make astrology less abstract and more hands-on, the Cast of Characters explains the zodiac with real-life examples we can relate to, spotlighting the lives of the divas and heroes of gay culture.

2. The Stars in Action: Characters don't just exist -- they act and interact with one another. This section offers practical insights and advice on using astrology in the real world. It addresses the issues most frequently on gay men's minds. A final chapter on spirituality discusses the karmic lessons associated with each sign.

A Brief History of Gay Stars

An intimate relationship between homosexuality and astrology goes way back. According to a manuscript written 500 years before the birth of Christ, the ancient Babylonians believed the constellation Scorpio represented the "love of a man for a man."

But it was the ancient Greeks who really started the ball rolling. The Greeks didn't invent astrology any more than they invented homosexuality, but they turned both into subjects of serious study and appreciation.

Plato, Sappho, and many other Greek authors produced a huge body of literature about the same-sex relationships that formed a cornerstone of their culture. Likewise, having learned astrology through their wars and trading ventures, the Greeks charted sophisticated horoscopes and cultivated the study and interpretation of the stars into an absolutely central part of their revered belief system.

Most important of all was Ptolemy of Alexandria. During the Roman empire's heyday, this Greek wrote the granddaddy of all astrology textbooks, the Tetrabiblos. In it, Ptolemy says certain planetary configurations influence sexuality and make men "in affairs of love restrained in their relations with women, but more passionate for boys."

In one of the most famous Greek myths, Zeus -- the king of the gods -- was represented by the biggest planet in the solar system, later called Jupiter by the Romans.

From up on his throne on Mt. Olympus, Zeus spied a beautiful shepherd boy tending his sheep. According to the story, this was no ordinary guy: He was Ganymede, "the loveliest born of the race of mortals."

Accustomed to getting what he wanted, Zeus had to have him. Magically turning himself into an eagle, Zeus snatched the boy and took him to live on Mt. Olympus where Ganymede served Zeus as his cup-bearer by day and his favorite (of many!) sweetheart by night. And for all of his good service, Ganymede was placed in the sky as the constellation Aquarius -- the water-bearer or cup-bearer. So it's the gods' own truth: Aquarius was a heavenly boy toy!

Not Just for Greeks Anymore

Conquering the Greeks and stealing their culture, the Romans likewise reserved a special place for astrology and homosexuality. A famous example is Julius Caesar. As for sexuality, Caesar indulged his libido so much that he was called "husband to every man's wife, and wife to every man's husband." As for astrology, Caesar received a warning from a soothsayer to beware the Ides of March, a type of astrological forecast. But Caesar ignored the stars, falling victim to a gang-bang assassination on the steps of the Senate. Poor Caesar, he should have listened to his astrologer!

Centuries later, throughout the European Middle Ages, astrology and homosexuality continued to quietly exist side by side with Christianity, sometimes grudgingly tolerated by the Catholic Church, other times fully endorsed by men of the cloth. But it wasn't until the Renaissance, with the "rebirth" of art and classical learning, that interest in stars and same-sex relations simultaneously took off again.

In Italy, for instance, the philosopher-astrologer Marsilo Ficino looked to the stars to explain sexual and romantic attraction, both homo and hetero. What's more, the artist Michelangelo had an astrologer who reported that "Mercury and Venus were in [Michelangelo's] house of Jupiter at his birth, showing that his works of art would be stupendous" -- and that he'd have a soft spot for beautiful men.

The Hapsburg Emperor Rudolf II (1552-1612) was another poofter who fancied astrology. Refusing to marry, taking little pleasure in war and politics, Rudolf preferred to spend his time in Prague studying nature, promoting the arts, and chatting with astrologers, whom he invited to live at his court. "He preferred the stars to politics, astronomers to politicians, the supernatural to the natural," according to A. L. Rowse in Homosexuals in History.

After the Renaissance, both astrology and homosexuality became officially taboo. Branded as "deviant," they were pushed to the margins of society by science and so-called "natural" law. But they didn't go away -- they just kept a low profile.

Almost simultaneously, in the late 19th century, astrologers and homosexuals started finding their voice. Oscar Wilde, for example, dared to blurt out "the love that dare not speak its name." Astrology, meanwhile, found new popularity, and many astrological societies were founded and popular books published.

During the 20th century, both astrology and homosexuality gained greater acceptance. The gay rights movement coincided almost exactly with what was being called the "dawning of the Age of Aquarius" by the 1960s counterculture. In fact, the term Aquarian Age was probably coined by San Franciscan Gavin Arthur, a Paris-trained astrologer interested in gay rights, to describe a new era of love and tolerance.

Have you ever thought you and your friends would make great characters in a book or movie? Of course you would! Real people lead lives even more interesting than those of fictional characters. And that's what this book is about. It starts with the premise, "What if you and your friends all put on a show about your lives?" What a glorious soap opera it would be!

So watch the stars. Listen to their stories and mysteries. Way up there your name is already in lights.

On with the Show!

Matthew "Dr. Matt" Abergel is a professional astrology consultant who has advised many entrepreneurs and small businesses. He's the former online editor of the Business Communications Zone, sponsored by Hewlett-Packard.

Andrew Ramer coauthor, Ask Your Angels, and author, Two Flutes Playing Dr. Matt breaks down the imaginary wall between sacred and secular, using stars from popular culture both to illustrate the stars above and mirror back to us our own wise and radiant souls.