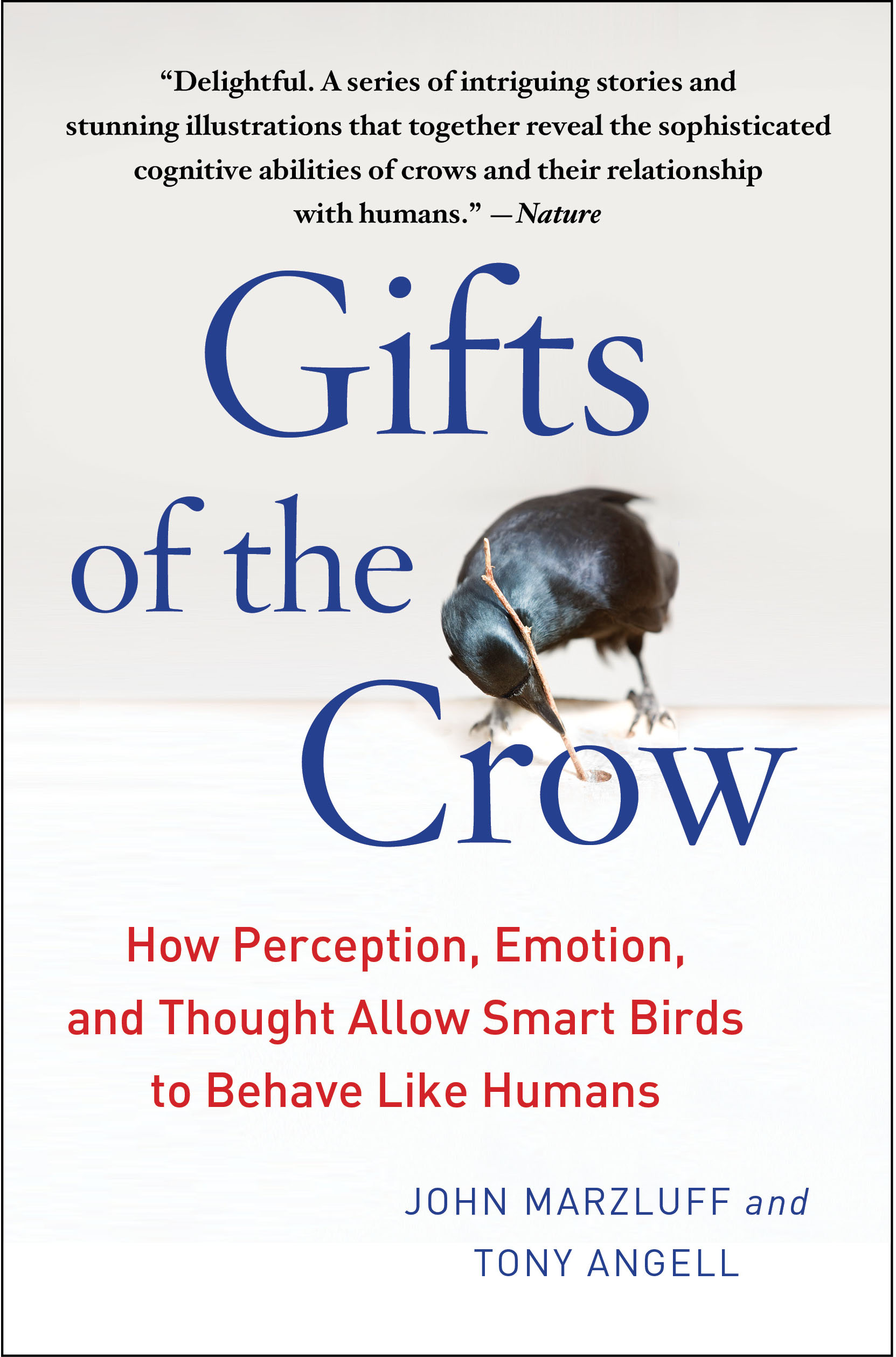 Gifts of the Crow

How Perception, Emotion, and Thought Allow Smart Birds to Behave Like Humans

Stan Coren’s groundbreaking The Intelligence of Dogs meets Bernd Heinrich’s classic Mind of the Raven in this astonishing, beautifully illustrated look at the uncanny intelligence and emotions of crows.

Playful, social, and passionate, crows have brains that are huge for their body size, which allows them to think, plan, and reconsider their actions. They also exhibit an avian kind of eloquence, mate for life, and associate with relatives and neighbors for years. And to people who care for them and feed them, they often give oddly touching gifts in return.

The ongoing connection between humans and crows—a cultural coevolution—has shaped both species for millions of years. Scientist John Marzluff teams up with artist-naturalist Tony Angell to tell amazing stories of these brilliant birds. With Marzluff’s extraordinary original research on the intelligence and startling abilities of corvids—crows, ravens, and jays—Angell’s gorgeous line drawings, and a lively joint narrative, the authors offer an in-depth look at these complex creatures and the traits and behaviors we share, including language, delinquency, frolic, passion, wrath, risk taking, and awareness. Crows gather around their dead, warn of impending doom, recognize people, commit murder of other crows, lure animals to their death, swill coffee and drink beer, design and use tools—including cars as nutcrackers—and windsurf and sled to play.

With its abundance of funny, awe-inspiring, and poignant stories, Gifts of the Crow portrays creatures who are nothing short of amazing.

A BLUE-BLACK CROW PERCHES REGALLY on the cornice of a stone building on the University of Washington campus, where he is often found. Almost hourly, he delivers food to his mate and three fledglings, while also keeping watch for any threat to the nest. Suddenly he turns his head, caws softly, and glides away, landing on a lamppost directly above a blonde woman. The woman, Lijana Holmes, smiles and calls him “Bela” as she offers him a breakfast of eggs and meat, which she prepares daily. Bela, in turn, presents his special gift—recognizing Lijana and participating in this routine with her. His gift to Lijana is more abstract than what he provides his bird family, but it is powerful nonetheless—it is the ephemeral and profound connection to nature that many people crave.

Bela gives a slightly different gift this morning to my team as we walk through the same campus. For Bela knows us, and we know him. Five-and-a-half years ago we captured Bela and affixed light plastic rings to his legs for identification. So whenever he sees us, the old crow cocks his head, stares, takes flight and swoops low—right at us—screaming a harsh call that we immediately recognize as a bird scold. His family and neighbors hear the cry and join in, flying toward Bela to support his attack, and soon they, too, share his rage. The mobbing crows circle and scream above our heads just as they would do to a predator. Bela’s discriminating actions give us remarkable and invaluable information, proving that crows can recognize and remember human faces. We wonder when, or if, he will ever forget (or forgive) us.

The gifts of the crow are physical, metaphorical, and far-reaching. Some, like Bela, provide understanding and companionship. Others have delivered sparkling glass, plastic toys, and candy hearts to their human benefactors. Some have dropped from the sky and shocked strangers by saying, “Hello.” A raven, with its natural curiosity and conspicuous manner, can lead a hunter to game or alert a search party to the whereabouts of an injured person. A magpie or jay can brighten a cold day by pecking softly at a window to beg for its daily ration of food.

These birds are corvids, members of the avian family Corvidae, which includes nutcrackers, jays, ravens, magpies, and crows. We will consider many of the gifts with which corvids enrich the lives of people and the action of nature in the chapters ahead, and we will argue that a corvid’s ability to quickly and accurately infer causation is itself a natural gift. It has survival value. This and other demonstrations of its mental prowess are gifts that all birds—and most likely their dinosaur ancestors—gained through evolution.

Crows’ close association with humans has inspired art, language, legends, and myths. Corvids have their own form of eloquence as they exercise mischief, playfulness, and passion. They also lead us to reflect on their common behaviors with us and other sentient creatures and empower us with a deeper understanding of nature.

People from all walks of life eagerly recount the antics of their former pet crows or enthusiastically tell us authors about the fascinating, sometimes troubling behaviors perpetrated by their local jays, magpies, and ravens. In this book we celebrate their accounts along with others we have found in the scientific and popular literature, because these rare and exceptional behaviors cannot be limited to the few specialized researchers who study corvids.

Some scientists are dismissive of citizens’ reports, viewing them as unreliable or unexplainable, because of laypeople’s lack of formal training, lack of documentation, overinterpretation, and uncontrolled influences. To be sure, we have encountered descriptions of events laden with hyperbole and seasoned with more imagination than fact, but we were compelled to investigate them nonetheless and to interview the people who made the observations in order to verify the events. Taken individually, such stories are anecdotal, but collectively they provide a unique body of information that stimulates scientific exploration and becomes an assemblage of possibilities.

We draw from this cross-cultural collection to offer many intriguing stories about corvids’ fascinating behaviors as we explore the anatomy and physiology of the bird brain. We have tested these anecdotes, such as those of the crow that summoned dogs or the ravens that windsurfed. Putting them through the scientific process, we evaluated each report for believability, precedence in the scientific and cultural literature, and the mental ability a bird would need to act in such a manner. We came to know the bird and the citizen scientist behind the observation as we examined as completely as possible what causes people and birds to share such poignant moments.

We recognize the intelligence and adaptability of this unique group of birds and base every thesis about their humanlike behaviors on how the brain of a bird is known to function. Through brain-scanning technology, which allows us to see within the crow’s gray matter, we first glimpse how a crow’s brain works through a problem. To date, most of the understanding of the inner working of the crow brain was derived from what was known from a few mammals and detailed investigations of song-learning in birds. We hope you will find, as we have, that understanding some of the neurobiological processes of crows adds mightily to your appreciation of how these remarkable creatures operate so successfully in our dynamic world. 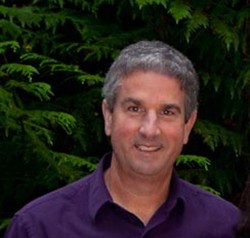 John Marzluff, Ph.D., is Professor of Wildlife Science at the University of Washington. The author of four books and over one hundred scientific papers on various aspects of bird behavior, he is the recipient of the A. Brazier Howell, Board of Directors, and H.R. Painton awards from the Cooper Ornithological Society. 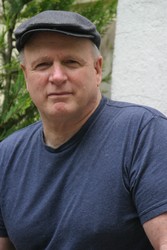 “Researchers writing about comparative human and nonhuman cognition always make brief, obligatory reference to the underlying neurological and hormonal systems, but Marzluff and Angell actually provide us with the details. In lucid, logical, and articulate prose, they carefully explain all the interrelated mechanisms involved in the fascinating behavior patterns of their corvid subjects and how these mechanisms relate to those of humans. Their book is indeed a gift, not only to those of us eager to learn about corvid behavior but also but also to those who wish to understand the bases for these actions.”

– Irene M. Pepperberg, author of Alex & Me: How a Scientist and a Parrot Uncovered a Hidden World of Animal Intelligence–and Formed a Deep Bond in the Process

“John Marzluff and Tony Angell's amazing, true stories of crows who rage, grieve, give gifts, work together, and even design and use tools would be enough to make this book a great read. But these maverick scientists go a step further, and actually show how these birds' big brains, though different from our own, achieve many of the same feats. Gifts of the Crow is a gift to all of us who have argued for years that humans don't possess the only minds in the universe. This is one of the most exciting books I've read in a long time.”

"In this important work, you’ll find stunning examples of crow emotionality and intelligence -- a triumphant vindication for those who have known all along that animals are capable of much more than they’re generally given credit for. . Crows dream as part of their learning process, for instance, and profile other individuals’ behavior and act accordingly. In many ways, their intelligence is equal to that of the great apes. Fascinating."

"Full of clear and detailed accounts of research...remarkable."

"Angell’s illustrations of birds are exquisitely detailed... the book will instill in many readers a sense of wonder and curiosity at what these birds can do. An insightful look at some of our surprisingly capable feathered friends."

“Delightful… a series of intriguing stories and stunning illustrations that together reveal the sophisticated cognitive abilities of crows and their relation­ship with humans."

"With its abundance of funny, awe-inspiring, and poignant stories, Gifts of the Crow portrays creatures who are nothing short of amazing. A testament to years of painstaking research and careful observation, this fully illustrated, riveting work is a thrilling look at one of nature's most wondrous creatures."

"A great read, this book is a tribute to the little-known and underappreciated minds of the birds of the amazing corvid family. Serious and at times hilarious, it pulled me in with its telling anecdotes and scientific context. Most importantly, it acknowledges and explores the many complex similarities between crows' mental traits and our own."

– Bernd Heinrich, author of Mind of the Raven

“Gifts of the Crow is a compelling book. Filled with wonderful stories of regular people’s interactions with ravens, crows, and jays, it also cites engrossing scientific studies, reports on the field work of biologists, and offers detailed explanations of how the brain of a corvid actually works. I was fascinated.”

– Suzie Gilbert, author of Flyaway: How A Wild Bird Rehabber Sought Adventure and Found Her Wings

“A remarkable look at just how smart the common crow and raven are… Highly recommended.”

"Throughout much of human history crows have been our constant companions. In their exciting new book, Marzluff and Angell, show us how crows brains work, while providing the evidence that these cerebral birds have a lot more in common with us than we ever imagined. And Angell's illustrations alone make the book worth the price."

Gifts of the Crow

How Perception, Emotion, and Thought Allow Smart Birds to Behave Like Humans