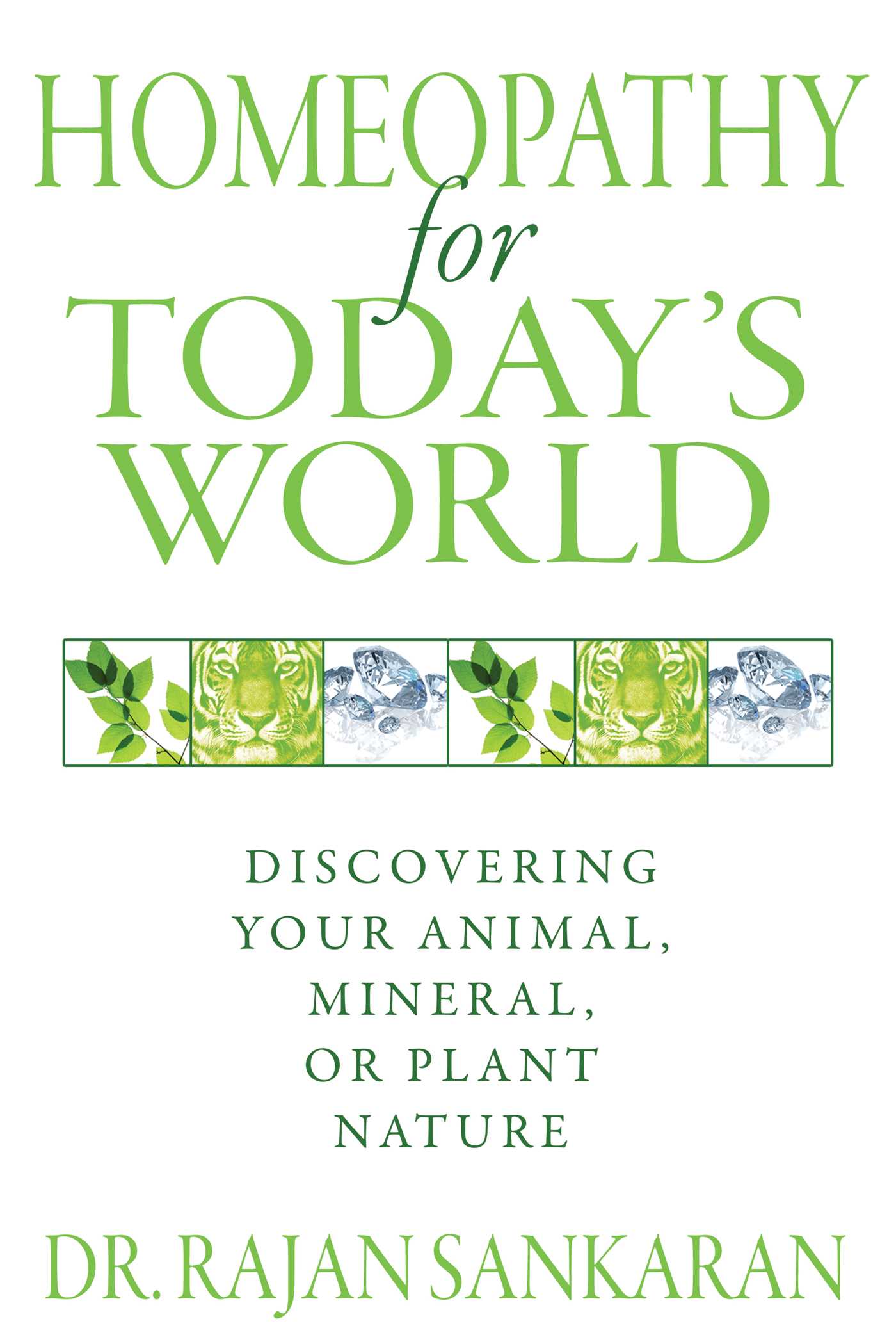 • Explains how to decode the ways we describe our pain and emotions to determine what animal, plant, or mineral is “singing” within

• Shows how awareness of the “inner song” can reduce its negative impact on our emotions, dreams, ambitions, careers, and relationships

The most important development in homeopathy since its discovery in the late 18th century by Dr. Samuel Hahnemann, the Sensation Method of diagnosis developed by Dr. Rajan Sankaran explains that our experience and perceptions of life’s stresses are shaped by an inner pattern, or “song,” connected to one of the three kingdoms in nature--animal, plant, or mineral. Revealing itself as a constant underlying sensation felt in both the mind and the body and expressed through illness and chronic ailments, this inner song of reoccurring reactive patterns--be it that of a competitive lion, a sensitive daisy, or structured phosphorus--drives our emotions, dreams, ambitions, careers, and relationships and is the underlying factor behind why stress affects each of us so differently.

Explaining that there are 7 levels to our experiences, Dr. Sankaran provides techniques to decode the words and gestures we use to describe our pain, emotions, and health conditions, allowing us to probe deeper into our experiences of stress and illness to determine what animal, plant, or mineral is “singing” within us. Showing how this core identity can be used by homeopathic physicians to treat our problems at their source, he reveals how becoming aware of our inner song can reduce the intensity of its negative effects, leading to less stress, better health, and more harmony in our lives.

A Map to the Inner World

Through careful observation, we come to the paradoxical conclusion that “each human being lives two lives simultaneously.” Although this statement initially appears contradictory, a careful observation of human nature shows it to be true. One life is our life as a human being, where energy sings the human song. On delving deeper, we find a completely different world inside which seems to sing the “Other Song,” another melody altogether. This other melody is not innately human but is a reflection of a pattern that we have borrowed from nature--be it from a plant, a mineral, or an animal. Therefore, this energy pattern is appropriate to nature, not to us.

The natural world consists of animal, plant, and mineral kingdoms, and the energy of each of these kingdoms is very different. As humans, we borrow an energy pattern from one of these kingdoms that corresponds to our inner way of perceiving and reacting. Depending on which kingdom is the source of the “Other Song” within, human beings can be mapped into one of the following three kingdoms by the basic issues that they face.

Recognition of the Mineral Song

The fundamental issue in minerals is the formation, maintenance, and loss of structure.

The central features of the mineral kingdom are its structure and organization. These are the features that help scientists understand this kingdom so well. The structure of minerals is ordered and predictable in many ways, allowing an exact classification of all elements into the periodic table.

In persons whose other song is derived from the mineral kingdom, the issues of capacity, strength, resistance, stability, and solidity--which are the innate features of minerals--are reflected in human form as capability, toughness, performance, and security. The core issue for these people is how to maintain the stability of their structure, be it their health, relationships, family, finances, talents, power, or position in an organization.

In contrast, the “noble” gases in the last column of the table (vertically on the far right side of the table) all contain eight electrons in their outer shell and are called “noble” because they are nonreactive and inert chemically. They are already stable, in themselves. Thus--moving from left to right--each row in the periodic table represents and maps a journey toward stability of structure.


The Third Row: Development of Identity

The third row represents the progressive development from dependence to independence in the areas of care, nourishment, and choice. If your inner song comes from the third row of the periodic table, you exist as an entity on your own, but you are apt to be unsure of your identity. The question now is “I am, but who am I?”

The elements on the left of the third row (sodium and magnesium) perceive this lack of identity as “living someone else’s life” and being completely dependent on the choices of others. In effect these people have dissolved their own identity into that of another person. In contrast, elements on the right side (phosphorus, sulfur, and chlorine) have a more developed sense of their identity since the ego and sense of self becomes clearer as we move across the row to the right. They have become free of the need for care and nourishment and have a significant degree of self-sufficiency.

A twenty-three-year-old girl came to me with a skin problem called lichen planus. She had dark spots all over her lower limbs with much itching. This condition, which is known to be stress related, is quite difficult to treat. However, what was even more of a problem was the girl’s state of mind. She was unmarried and was staying with her parents, and every day there would be intense quarrels between her and her parents in which the patient would become abusive. She was desperate and sometimes even had suicidal thoughts.

I started by asking for her description of the skin problem. She said there were two types of skin spots, with different characteristics, and both of them coexisted at the same time, in the same place. I was intrigued by this description, and asked her to describe this phenomenon more. She said that they were completely opposite and remotely similar, that they were completely opposite like cheese and chalk. At this point the description of her condition was so strange that it had to come from her other song. I asked for more, and she generalized by saying that it is the same situation where she lives with her parents, where each one is completely different from the other. She felt she had to listen to them because, “I am unable to think for myself.”

The essence of her perception is one of her own nondevelopment. Since her own sense of identity and choice are not clearly established, there is a conflict within her whether she should listen to herself or to others. This conflict is so confusing that she is frustrated enough to want to destroy herself. The issue of nondevelopment of self is a mineral-kingdom issue. In this girl it is particularly manifested in the area of development of her identity, which is an issue of the elements of the third row of the periodic table. Along with her own awareness of her problem, arrived at through the interview process, the homeopathic remedy Alumina--from the third row--healed her both in skin and mind.
Dr. Rajan Sankaran

“Dr. Rajan Sankaran is one of the most insightful homeopathic practitioners and thinkers alive today. The depth and originality of his vision have expanded the boundaries of homeopathic philosophy and practice, gaining him thousands of adherents among professional homeopaths worldwide. In this unique volume, Dr. Sankaran shares his perspective on homeopathy in a manner designed to be accessible to the layperson as well as the clinician.”

“Homeopathy for Today’s World is a triumph: the healing art is revealed! Rajan Sankaran’s experiences and insights to date are united within an overarching philosophy and are made explicit and intelligible. His quest for the most reliable form of homeopathy has been unremitting. I will recommend this book to all my students.”

– Misha Norland, founder and principal of the School of Homeopathy, Devon, England

“Dr. Rajan Sankaran has given us a valuable tool to discover ‘the other song,’ the inner individualizing experience inherent in every person. The nature of this core feeling plays an important role in the response to stressful situations and generally in the maladies of life. Dr. Sankaran’s clarity of thought in the methodology of how to access the continuous inner sensation has opened an immense perspective. His method serves as a deep journey into the self and is a valuable advancement of homeopathic practice today and in the future.”

“. . . a useful reading for homoeopathy practitioners--beginners and old-timers alike. Its merit lies in the scale of its view revealing the art of healing. The author’s overarching philosophy is explicit and intelligible, and the exposition is such as to make understanding of the subject easy.”

“His [Rajan Sankaran] interviewing techniques alone are worth the price of the book. . . It also will stimulate interest in items like Bach Flower Essences.”

“The focus on understanding and learning one’s “inner song” to reduce negativity and stress makes this a top pick for any alternative healing library.”

“This book is truly groundbreaking in the information it presents, and it explores an entire other universe from most homeopathy books.”

“Explaining that there are 7 levels to our experiences, Dr. Sankaran provides techniques to decode the words and gestures we use to describe our pain, emotions, and health conditions, allowing us to probe deeper into our experiences of stress and illness to determine what animal, plant, or mineral is ‘singing’ within us. Showing how this core identity can be used by homeopathic physicians to treat our problems at their source, he reveals how becoming aware of our inner song can reduce the intensity of its negative effects, leading to less stress, better health, and more harmony in our lives.”

“Dr. Sankaran’s approach is the greatest single advance in homeopathic medicinal practice in the past century.”

– The American Journal of Homeopathic Medicine