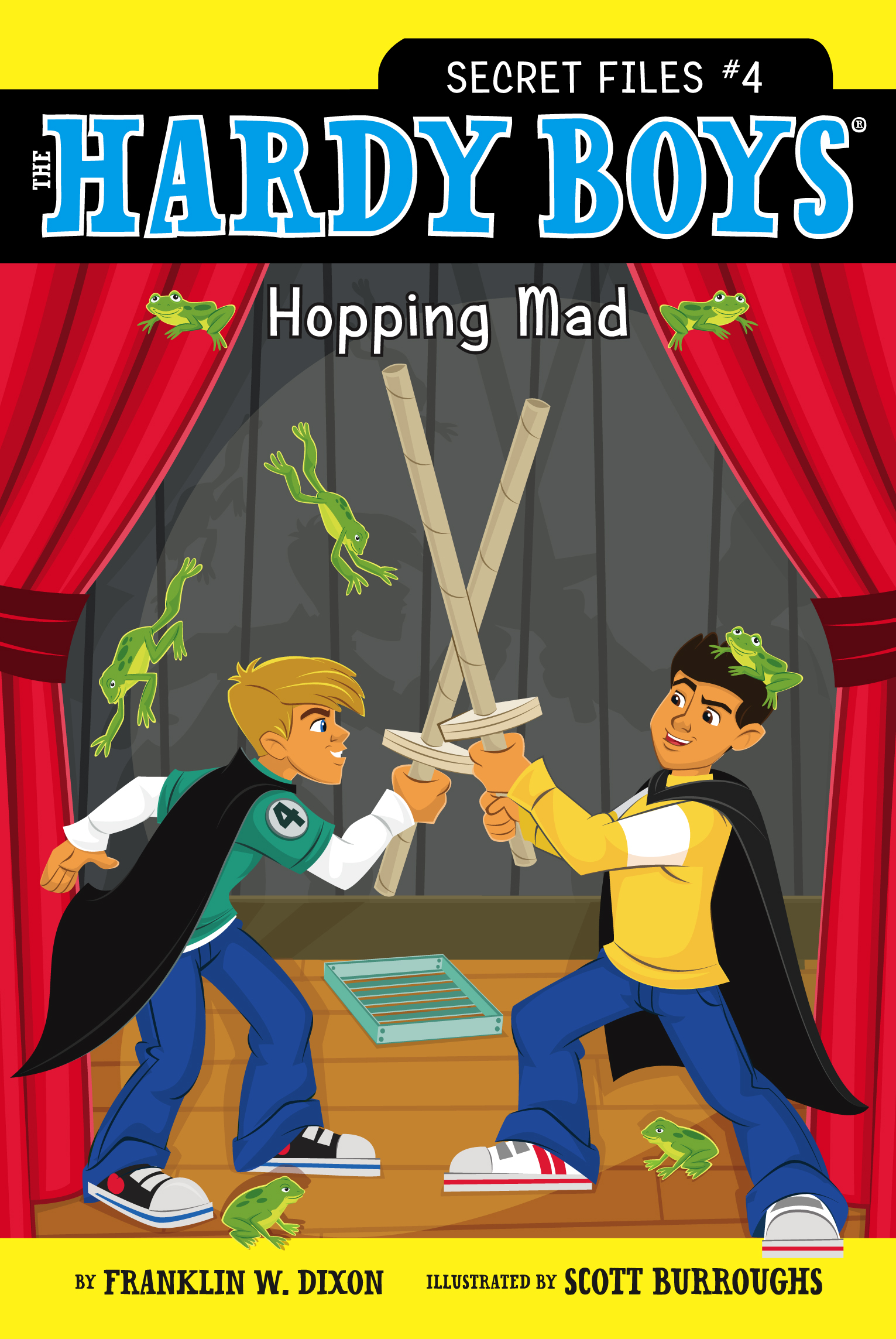 In Hopping Mad, the boys have to figure out a way to stop their school talent show from being ruined—by raining frogs! Let the sleuthing begin!

Hopping Mad 1
Prepare to Die
Frank and Joe Hardy stood facing each other on an empty cliffside. Beneath them the ocean crashed and roared. In their hands each brother held a sharp metal sword. For a long minute they stared at each other. Suddenly, Joe screamed.

He came running at Frank, sword held high in the air! At the last moment, right as Joe swung his sword at his brother’s head, Frank dove to the ground. He did a perfect front roll and rose to his feet gracefully, out of Joe’s reach. Joe’s sword hit only air, and he stumbled. Frank took advantage of Joe’s momentary loss of balance and swung a vicious cut right at Joe’s stomach. Joe managed to get his sword up, just barely in time to block his brother’s blow.

They battled back and forth across the cliff. The only sound was the huffing and puffing of their breath, and the loud clash of metal on metal. Sometimes Joe seemed to have forced Frank into a corner, but at the last minute Frank would execute a daring escape. Other times Joe seemed almost at the point of surrendering, only to come back with a powerful slice at Frank. Finally, after a round of cuts so fast the eye could barely follow, Joe had Frank disarmed and pressed up against the cliffside! His sword was at Frank’s throat. He looked his brother in the eye and said, “My name is Inigo Montoya. You killed my father. Prepare to—”

“Boys! What are you doing? And are those my curtain rods?!”

Suddenly, the cliffside and roaring ocean disappeared, and Frank and Joe were standing in their backyard. In their hands they held metal curtain rods instead of swords. Their mother and Aunt Gertrude were leaning out the window of the kitchen. They didn’t look happy. Joe lowered his curtain rod.

“Mom!” Joe yelled back. “We’re getting ready for the school talent show, remember?”

“We’re acting out the big sword fight scene from The Princess Bride,” said Frank. The Princess Bride was Joe and Frank’s favorite movie. They’d each seen it seventeen times. The big fight between Inigo and Wesley was their favorite part. They’d probably watched just that scene more than a hundred times. They were sure it would be a big hit at the Bayport Elementary School’s annual spring talent show.

Aunt Gertrude and their mother had now come out onto the lawn. The boys could tell that they were not happy: They had their hands on their hips and their eyes were narrowed.

“I don’t know if it’s safe for you boys to be hitting each other with those,” said their mom. “One of you could lose an eye!”

“Yes,” agreed Aunt Gertrude. “Those curtain rods could hurt somebody!” Aunt Gertrude had just moved in with them a few weeks earlier, and while it was usually great to have her around, sometimes it meant twice as many rules.

“But, Mom!” said Joe. “We need to practice. There’s going to be a lot of competition.” They’d been working on their routine for weeks! If they had to stop now, they would never have time to come up with something new.

“Yeah,” chimed in Frank. “Cissy is going to be juggling four baseballs at the same time. And Melissa and Todd are going to be singing a duet!” Cissy “Speedy” Zermeño had the fastest hands on the local Little League team, the Bayport Bandits. She was good friends with Frank and Joe—but they still wanted to beat her in the talent show! And Melissa and Todd were like Bayport royalty—they’d once starred in a Tasty, Tasty Treats Ice Cream commercial, and they’d had the leads in every school play since kindergarten!

But Mrs. Hardy was not convinced.

“You can practice just as well with something less dangerous. Give me those.”

She held out her hands. Frank and Joe shuffled forward and sadly placed the curtain rods in her hand. All that practicing for nothing! They were out of the competition before it had even begun.

“Wait one second, boys.” A smile grew on Aunt Gertrude’s face. “I have an idea.”

She ran back inside the house. The boys heard the sound of footsteps rushing up the stairs, and then the sound of the attic door slamming. A few minutes later Aunt Gertrude reappeared in the backyard.

“Here,” she said happily. “You can use these.” She held out two cardboard tubes, the kind that wrapping paper came curled around. “I saw them when I was cleaning out the attic the other day. I was going to throw them out, but thankfully I forgot.”

Frank and Joe each picked up a tube. They took a few practice swings. The tubes were just the right length! And they wouldn’t hurt as much when they accidentally got hit. This was perfect!

“Thanks, Aunt Gertrude,” the boys said together. Then Frank turned to face Joe. The backyard, Aunt Gertrude, and their mom disappeared from view. They were back on the rocky cliffside.

The battle was back on!
Franklin W. Dixon