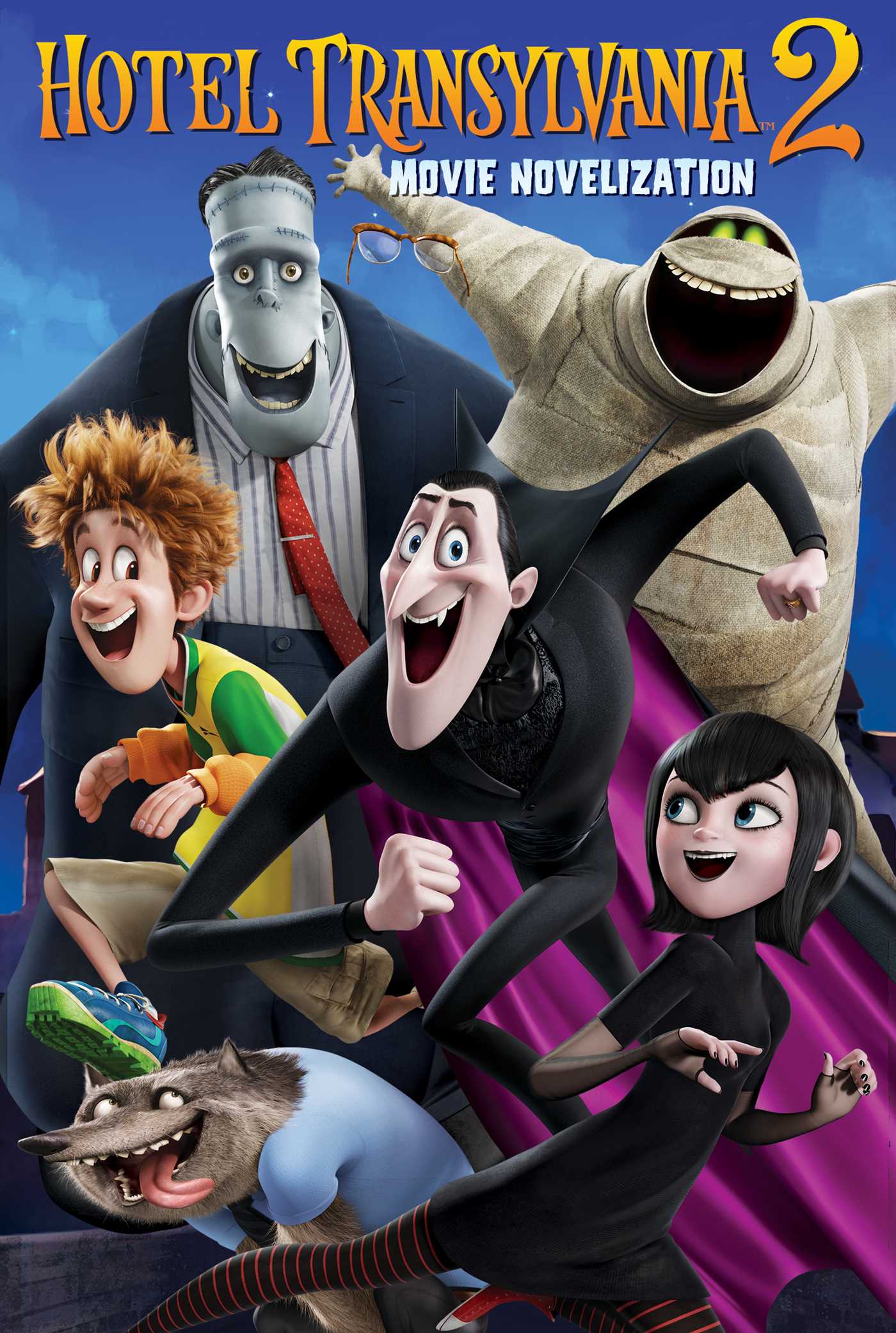 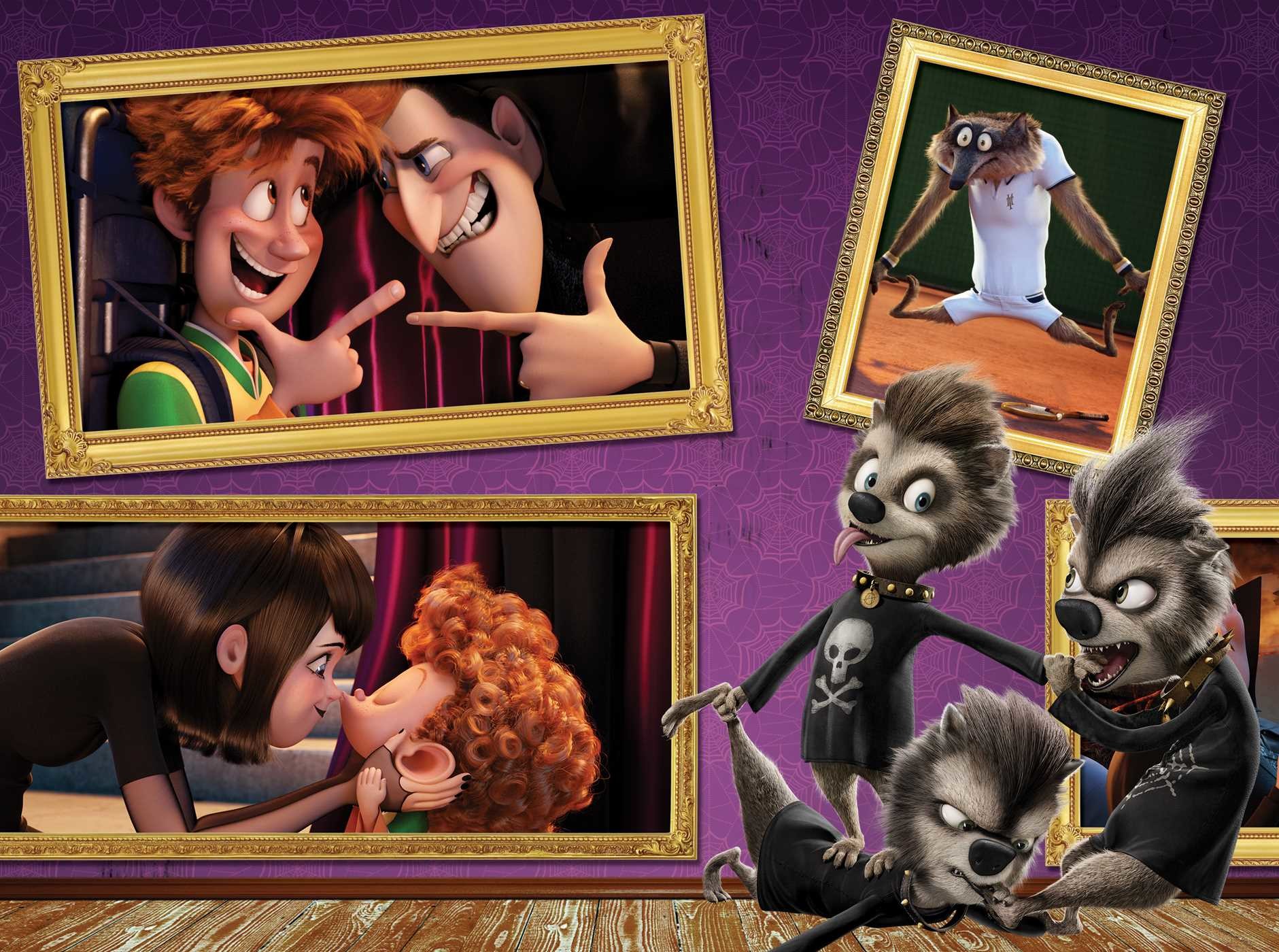 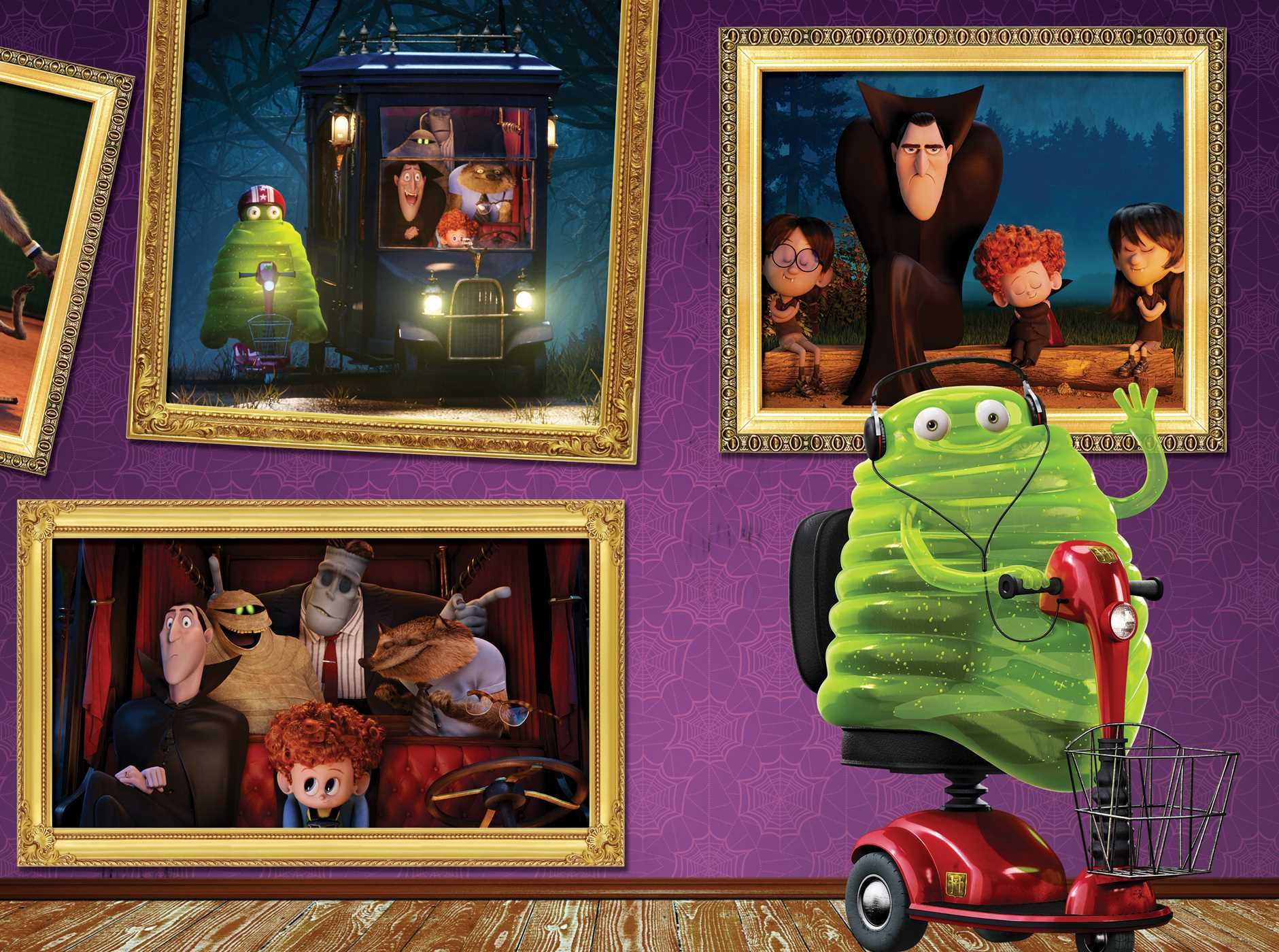 This retelling of the hilarious monster comedy includes an eight-page insert of full-color images!

Everyone’s favorite monsters are back for another exciting adventure in Hotel Transylvania!

Hotel Transylvania 2 Movie Novelization CHAPTER ONE
All fathers get emotional on their daughters’ wedding days. But on his daughter Mavis’s wedding day, Dracula was taking it particularly hard. When it was time for the ceremony, his three monster friends found him hiding in a closet.

His buddy Frankenstein spoke to the closed closet door.

The door opened. Dracula came out. He looked awful. His tuxedo was misbuttoned and his shoes were on his hands. He was a wreck.

“Okay! Here I am! Stop yelling at me!” Dracula yelled.

His friend Griffin looked him over. “Pull yourself together, buddy!”

Frankenstein tried to calm him down. “Drac, everything’s going to be fine.”

“I know that! It’s all good!” Dracula answered.

“Then what are you doing up there?”

All three monsters looked upward. Dracula was on the ceiling curled in the fetal position.

“I can’t go through with it,” Dracula told them. “I won’t make it. She’s marrying a human! What if it’s all a trick, and he’s going to hurt her?”

“Yeah, and humans love us now,” Griffin added. “I don’t want to brag, but my workout video’s a best seller.”

“I don’t care!” Dracula shouted. “I’m losing my Mavy! What if he and his filthy backpack take her away from me for good?”

“Drac, the important thing is, right now you gotta be strong for your little girl. She’s gotta be scared too,” Frankenstein said.

That did it. Dracula couldn’t let his beloved Mavy be scared, even for an instant. He floated down from the ceiling.

Mavis was busy getting ready in her room. Her monster bridesmaids were helping her get ready when they heard weird wailing sounds in the hallway.

“What’s that messed-up noise?” one of the bridesmaids asked.

Dracula entered the room. His eyes were red and watery and his cheeks were streaked with tears.

“Daddy, I love him so much, but am I doing the right thing? He’s my zing, but I’m so young! I’m still just a hundred teenager!”

“Girls mature faster,” Dracula told her. “And you’re practically a hundred and twenty.”

“But I didn’t realize there’s so many things I can do out there! I could be a nuclear pharmacist! Or a mental hydentist! Or I could help people, like a social twerker.”

“I never heard of that last one, but it sounds very helpful,” Dracula said.

“You’ll do it together,” Dracula told her.

Mavis took a deep breath. “Thanks, Dad. Why do you look so sad?”

Dracula turned into a bat, and his bottom lip started to quiver.

“It’s just . . . the hotel will feel so empty when you and Johnny find your new home. And I’ll be all alone.”

Mavis was surprised. “What? This is my home. I love it here and so does Johnny. We want to build a family here just like you did.”

Dracula immediately turned back into his human form.

“I really am!” Mavis told him.

“Then so am I, my little poisonberry,” Dracula told her. Then they walked out, arm in arm.

At the wedding ceremony Dracula couldn’t hide his emotions. He had written a song especially for Mavis.

Whose poop I’d wipe away

Protecting her from humans so with Daddy she could stay

Good thing that I’m dead, because you take my breath away

Seems like only yesterday that you were Daddy’s girl

I’m your batty daddy, and you’re my world

Daddy’s going to keep you, and he’ll keep you safe because you’re Daddy’s girl

The wedding was beautiful.

Johnny stood at the altar with his backpack. The backpack was wearing a bowtie and held the ring for Johnny to give to his true love.

Johnny’s clean-cut brother was a groomsman. Kent, tall and athletic, stood next to an odd-looking monster. He clearly felt a little confused and a whole lot out of place.

Mavis’s bridesmaids stood on her side of the altar. Clarabelle, a monster with frog limbs, was next to Johnny’s red-haired sister. The shrunken head that lived on Mavis’s bedroom doorknob was there too, strung to a coat hanger. She had no body, so her matching bridesmaid dress hung on a small coatrack nearby.

Johnny’s other brother Brett was walking down the aisle with Mavis’s monster friend Kelsey. Kelsey rolled her eyes and muttered, “I can’t believe I’m paired with this loser.”

A little red-haired girl (another relative of Johnny’s) was a flower girl. She carried a teddy bear and a bouquet of flowers. Everyone said “Awww” as she walked down the aisle. But then a slew of wolf pups noticed the teddy bear and rushed in to pounce on it, shredding the teddy bear and flowers. The little girl was a disheveled mess as the ruined petals fell all around her.

The humans were shocked at the violence, but the monsters thought it was cute. Together they said, “Awww.”

It was time for the bride to appear. Slowly, dramatically, Mavis stepped up to the end of the aisle. All eyes, monster and human, were filled with happy tears as they turned to face her.

Dracula held back his own tears as she started down the aisle. Inside, he suffered. His little girl was getting married . . . to a human. He hid his feelings through the ceremony.

When it was time for bride and groom to kiss, Dracula could no longer keep his terror inside. Using telepathy, he threw the shrunken head between them just as Johnny was about to kiss Mavis.

Grossed out, Johnny opened his eyes. Dracula felt a little bad about ruining the moment, but not too bad. He gave in, saying, “Okay, one quick one.” They kissed fast before he could throw any other monsters at them.

After the wedding a prickly monster hugged Johnny’s dad, Mike. It hurt.

At the reception Marty, the palest monster in the castle, gave a heartfelt, poetic, and completely unintelligible speech. The monsters applauded, but Johnny’s family didn’t get it at all. Johnny raised his glass, saying, “True. So true, buddy.”

The cake screeched in horror as it was cut. The cut slice shrieked like a child separated from its mother. The monsters applauded wildly. Johnny’s family grinned uncomfortably while Mavis and Johnny fed each other tiny pieces of screaming cake.

To end the magical evening, Dracula took out his ukulele and very, very, very slowly sang the ending of the song he’d written for Mavis and Johnny.

“Daughter—my one wish for you

As on wings of love you soar

Only love and happiness, now and evermore

Shining your moonlight on the whole wide world

And kind of Daddy’s, too

Your mommy’d be so happy

’Cause she always knew love is making room for all the best in you.”

Mavis ran from Johnny over to her father. She hugged him hard, letting her emotions show and her tears fall. Other monsters started crying too, including Bigfoot. His giant tear fell on Johnny’s mother, Linda, soaking her entire body.