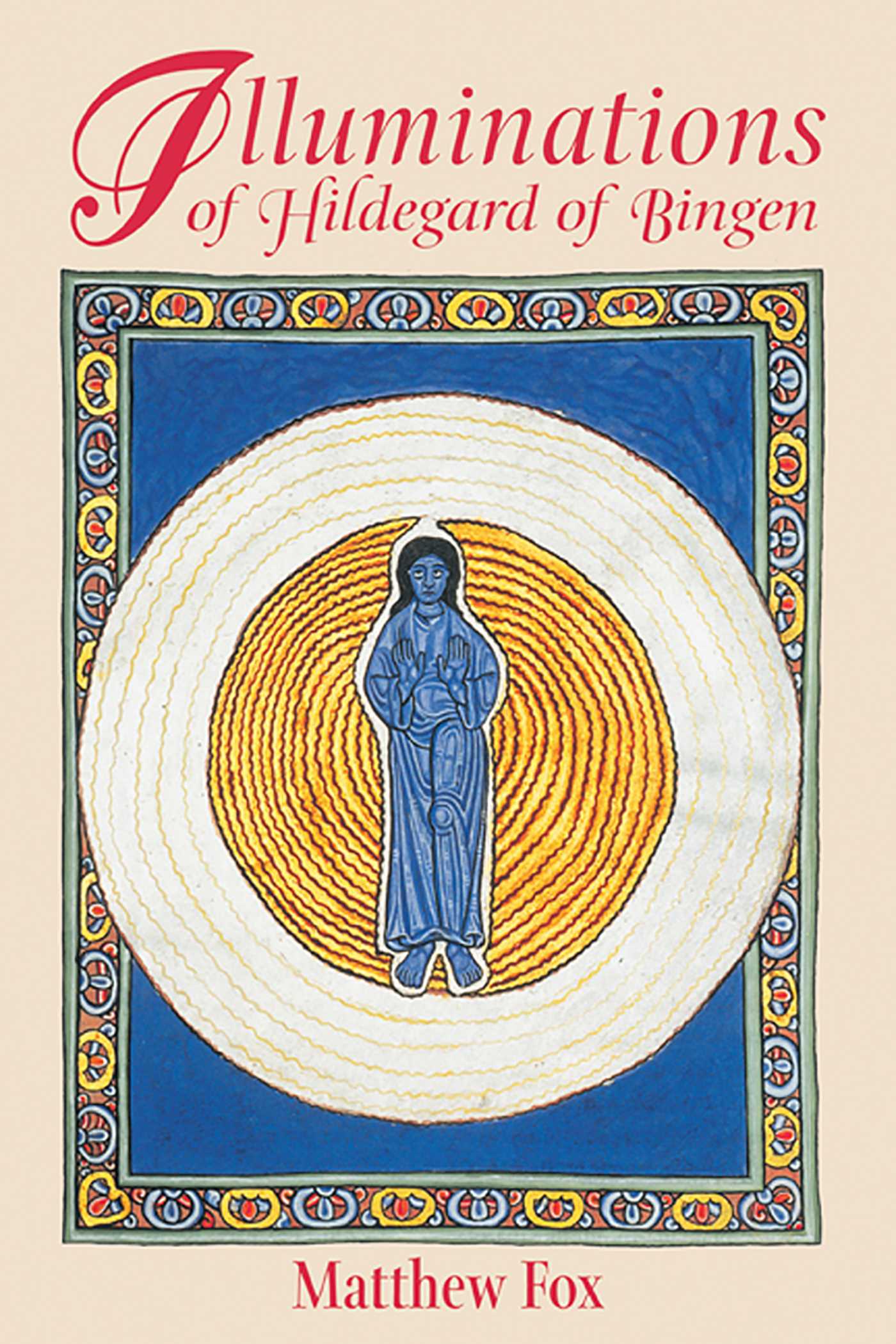 An introduction to the life and work of Hildegard.

• Reveals the life and teachings of one of the greatest female artists and intellectuals of the Western Mystical Tradition.

Hildegard of Bingen (1098-1179) was an extraordinary woman living in the Rhineland valley during most of the twelfth century. Besides being the abbess of a large and influential Benedictine abbey, she was a prominent preacher, healer, scientist, and artist. She also was a composer and theologian, writing nine books on theology, medicine, science, and physiology, as well as 70 poems and an opera. At the age of 42, she began to have visions; these were captured as 36 illuminations--24 of which are recorded in this book along with her commentaries on them. She also wrote a text describing these visions entitled Scivias (Know the Ways), now published as Hildegard of Bingen's Mystical Visions.

Author Matthew Fox has stated, "If Hildegard had been a man, she would be well known as one of the greatest artists and intellectuals the world has ever seen." It is a credit to the power of the women's movement and our times that this towering genius of Western thought is being rediscovered in her full grandeur and autonomy.

Virtually unknown for more than 800 years in Western history, Hildegard was featured as one of the women in Judy Chicago's Dinner Party in the early 1980s and published for the first time in English by Bear & Company in 1982. In addition to her mystical teachings, Hildegard's music has been performed and recorded for a new and growing audience.

Pages 12-14
Hildegard, mystic and a prophet, wishes to be a practical, helping mystic and prophet. She constantly extols the virtue of “usefulness” and in the final sentence of her major work, De Operatione Dei, she tells us that the reason for her work has been “for the usefulness of believers” who are asked to receive her words with a “modest heart.”18 She writes that God “destroys uselessness.”19
Hildegard gives us a working guide to her work when she insists on usefulness. It is one thing to translate Hildegard or to be with her pictures and music--it is quite another to deeply understand her words and have them affect your psyche, religion, and culture to the extent that they are “useful,” as she herself put it. Not everything a twelfth century nun speculated about is of equal value to our journeys and struggles today. But just how should we understand a mystic of eight centuries ago? How should we interpret her?
Even in her own time there were plenty of complaints from those who heard or read Hildegard but did not understand her message in the usefulness with which it was intended. Abbot Berthold of Zwiefalten wrote her that,“although I am often put in a joyful mood by the consolation of your words, I am sometimes depressed again because their obscurity closes them to my understanding.”20
The recovery of the creation-centered spiritual tradition in our time is the greatest help in our understanding Hildegard of Bingen. She, being a Benedictine and a woman true to her experience, is a rich spokesperson of that tradition. Even though she lived in an era when Augustine dominated theology, Hildegard de-emphasizes fall/redemption religion in favor of creation-centered theology. Augustine, the great introspective genius, is silent on the cosmic Christ--but for Hildegard, the cosmic Christ forms the center of her thought. It is remarkable, for example, to compare her sense of cosmic justice and love of nature to her contemporary, Peter Lombard, whose works became for centuries the basic textbook of Christian clerics. As long as theology had only a fall/redemption approach to spirituality, it was not possible to understand Hildegard’s immense contribution to spirituality. Now that we do, however, the serious student of Hildegard will find all four paths and every one of the twenty-six themes of the creation-centered spiritual tradition in her work. Like a magnet held up to her pages, these themes draw out the most “useful” insights of her theology. These paths and themes, which I have delineated elsewhere in my book, Original Blessing, A Primer in Creation Spirituality include the following: Dabhar, the creative energy or word of God; blessing; earthiness as the meaning of humility; cosmos; trust; panentheism; royal personhood; realized eschatology; cosmic hospitality; emptying; being emptied; nothingness; divinization; art as meditation; trust of images; dialectic; God as Mother; New Creation; trusting the prophet call; anawim; compassion as celebration; compassion as erotic (Hildegard says “zealous”) justice. Applying these themes to Hildegard’s work makes her theology become alive, incarnated, fleshy, and “useful.”
We need to understand how the creation-centered tradition offers a different agenda by which to understand some of the greatest minds in our Western heritage. It offers a hermeneutic or interpretation for seizing the essence of our creation-centered ancestors--an interpretation which is missing wherever creation spirituality is untaught.
Without this “grid;” interpreters of Hildegard miss her poignancy simply because they only know stale categories of fall/redemption theology. In researching and writing this book, I have personally been overwhelmed by the richness of Hildegard’s deep theological development of every single one of the themes of the creation tradition. I have been profoundly moved by the amount of Eckhart in Hildegard, that is to say the themes that she pays attention to that later appear in Meister Eckhart’s work. Indeed, Hildegard and Eckhart are sister and brother mystic/prophets. I heartily recommend reading this book a second time through with my volume of Meister Eckhart’s sermons, Breakthrough: Meister Eckhart’s Creation Spirituality in New Translation. I have learned from preparing this work on Hildegard that she has to be considered the pre-eminent woman theologian of the West up to the twentieth century. Her scope of intellectual, artistic, scientific, and political interest and involvement is astounding. I believe that someday soon she will follow in the footsteps of Catherine of Siena and Teresa of Avila in being named a Doctor of the Church.
Matthew Fox

"If one person deserves credit for the great Hildegard renaissance in our time, it is Matthew Fox. Here in the long-lost legacy of Hildegard of Bingen is a mystical genius who could help to illumine the human soul spiritually, ecologically, politically--in every dimension of life."

"She [Hildegard] castigated a pope for his timidity and an emperor for moral blindness. She taught scholars and preached to clergy and laity as no woman before her had ever done. . . . She claimed that now woman rather than man--obviously Hildegard herself--was to do God's work. It is difficult not to see in her visionary experience and activism, as well as her claim for the mission of woman in a male-dominated age, a gesture of protest, the reaction of an intelligent and energetic woman who chafed under the restraints imposed on women by the culture in which she lived."

"We find relatively few Christian guides in the past to enlighten or to inspire us to a more functional relationship between the human and the natural worlds. . . . Hildegard might be considered a model with her sense of the earth as region of delight. . . . She has reached far into the emotionally exciting aspects of nature in a unique mode of Christian communion. She sees the creation maker in the ancient manner of the fertility cults, a view she expresses in her statement that creation and creator are related as woman and man. Only thus is the earth fruitful. . . . Because of this 'erotic' bond the earth becomes luxuriant in its every aspect."

– Thomas Berry, author of The Great Work and The Dream of the Earth