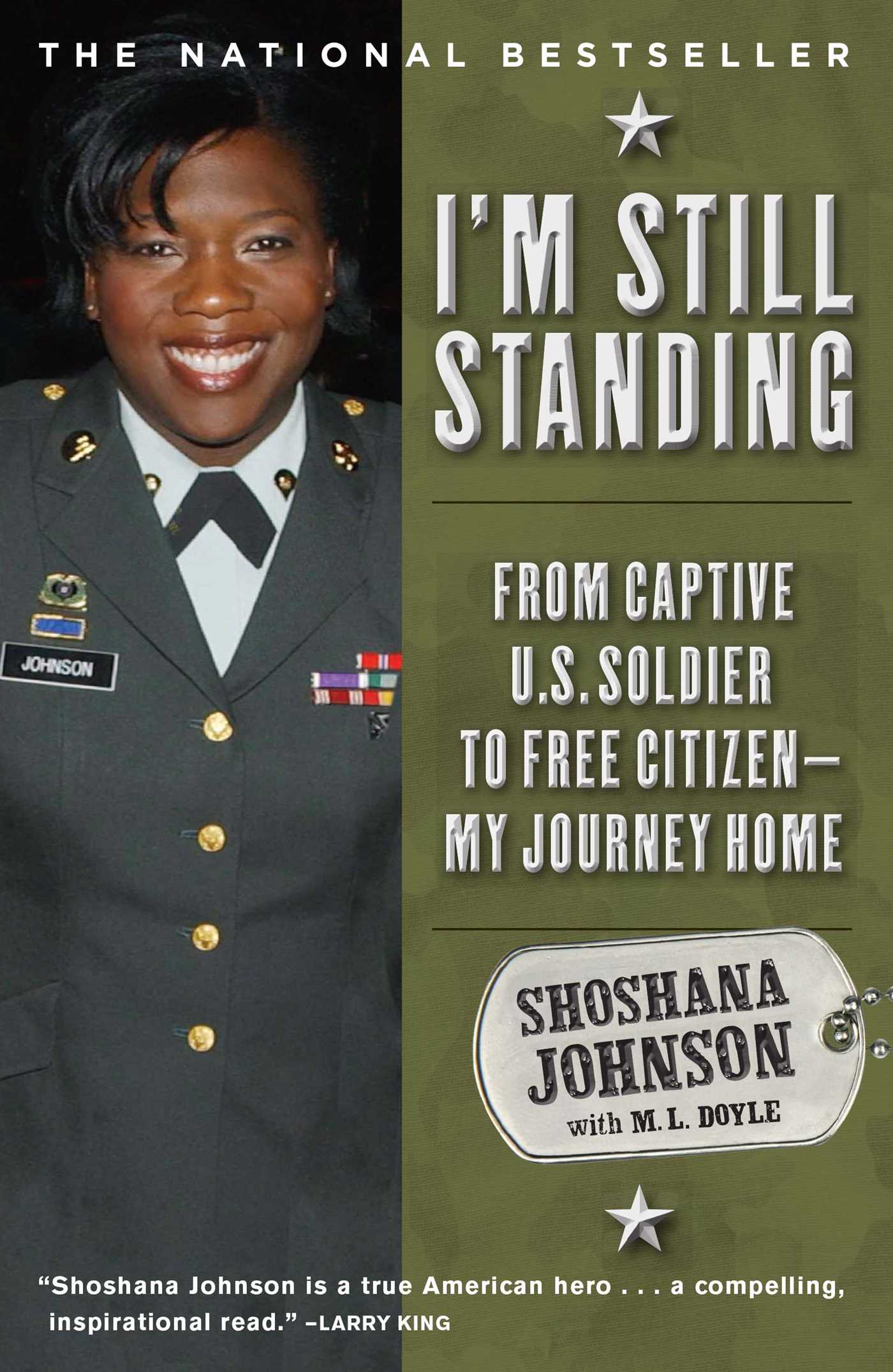 SHOSHANA HOLDS NOTHING BACK in this harrowing account of an ordinary woman caught in extraordinary circumstances. She reveals decisions made by chain of command that may have led to her twenty-two-day imprisonment, describes the pain of post-traumatic stress disorder, and shares the surprising story of how a specialist in a maintenance company ended up on the front lines of war. Told with exceptional bravery and candor, I’m Still Standing is at once a provocative look at the politics of war and the unforgettable story of a single mom and soldier who became an American hero.

It was like a line in a movie. But I was saying it. I had felt a hard thud against my left ankle, then a searing burning sensation through both of my legs, but I had no idea how bad it was—only that I didn’t have time to check it out. My legs felt torn and wrecked and I could feel a warm pool of blood forming at the bottom of both of my boots. My toes were swimming in it, and it hurt like hell. Under other circumstances, I would have curled into a fetal position, grabbed my wounds, screamed for help, been paralyzed in pain and fear, but as much as it hurt, there was too much stuff going on to pay any attention to it.

It was Sergeant James Riley’s idea to take cover under the five-ton tractor trailer I had ridden across the desert. As usual, he had sounded completely confident and sure about his idea to crawl under the huge vehicle to get away from the barrage of fire that surrounded us. It might have been his stoic attitude, or maybe it was the BCGs—the Army-issue glasses that supposedly made you look so undesirable they were nicknamed Birth Control Glasses. Those glasses and Riley’s confident attitude colored everything he said with the hue of wisdom and made it easy to follow his commands, so Specialist Edgar Hernandez, the driver of the truck I rode in, and I had hit the dirt and low-crawled under there with him without thinking twice.

There hadn’t been too many other options. We couldn’t tell how many people were shooting at us. It could have been hundreds judging by the amount of fire. However many there were, they wanted us dead and they surrounded us. No one shooting at us was wearing a uniform. They were just men, most of them in Western clothes—shirts, jeans, athletic shoes. Some wore traditional robes and sandals. It wasn’t the army I had expected to call an enemy in this fight. They were just men, angry, screaming, deadly men who outnumbered us in a big way and they were killing us, killing my friends.

We had wandered into their killing field like lost lambs. Our convoy of eighteen vehicles had driven down the narrow streets of this medium-size city. Buildings towered over us as we made several turns, stopped a few times, and were obviously confused about where we were and what we were doing. We had given them plenty of time to gather their forces and surround us. We had almost asked for this.

A constant barrage of bullets was pinging off our vehicles, nearby buildings, the ground all around us. They were lobbing mortars, and the heavy explosions made the ground leap beneath me. It had to have been like shooting down into a pen of trapped animals. We didn’t have anywhere to go, no escape, and little defense. The shots were coming so close, you could hear the zipping noise they made as they whipped past us to hit something solid a fraction of a second later. I was only halfway under the truck when the bullet struck my legs. I screamed that I had been hit and Riley grabbed my arm and dragged me the rest of the way under cover. Seconds later, Hernandez took a round in the upper arm.

There was blood everywhere.

“Why isn’t anyone coming to help us?” I screamed.

Riley and Hernandez ignored me, their attention focused on what was going on around us. It was a miracle we weren’t all dead. Our attackers were laying down a blanket of fire from every direction and angle. My untrained assessment of the situation was that we were pretty much fucked. I had fired my weapon once from the cab of the truck—a shot I got off despite my fear, violently shaking hands, and the two-hundred-meter distance between me and the guy aiming at me with a pistol. I missed.

“Give me your weapon,” Riley demanded.

I handed him my M16. He took aim and pulled the trigger. Nothing happened.

“This one’s jammed, too,” he said in disgust, tossing the weapon to the ground. “Piece of junk.”

Hernandez fired a couple of times, but in short order his weapon became as useless as mine. Now, between Riley, Hernandez, and me, we had three M16s that wouldn’t fire.

We were defenseless. Worse, I knew people were dying around us, people who were my friends. People I cared about.

I knew First Sergeant Robert Dowdy, the man we called Top because he was the highest-ranking noncommissioned officer in the unit, was dead. I had had a brief glimpse of his battered body after his vehicle slammed into the back of my five-ton. My friend Pie, Specialist Lori Piestewa, had been driving Top’s vehicle and I knew she was hurt, too, hurt badly. She looked pinned inside the wreckage, blood splattered on her forehead. I couldn’t tell if she was dead or alive but she wasn’t moving. My friend Jessica, Private First Class Jessica Lynch, had been riding with Pie, but I hadn’t had any sight of her. I only knew that their vehicle had been hit with something like an RPG (rocket-propelled grenade), they had lost control, and they had slammed into the back of my five-ton, which left their truck a twisted pile of metal. It was apparent that anyone left alive in there was probably in very bad shape.

A bullet struck one of the huge tires of the truck that served as our shelter and air hissed out, the vehicle slowly lowering and tilting over us. Another round pierced the radiator, adding a loud hiss to the noise around us. I worried one of the rounds would find the gas tank and the whole thing would explode over us and we would go up in a ball of flame.

“Can you guys see any of our guys, anyone coming to get us?” I asked.

“Miller has a good fire position. He’s taking a bunch of people out,” Riley said. He still seemed calm, calculating, taking in the whole situation as if from a distance.

Everything was noise and confusion; flying dirt and black smoke obscured our vision. The stinging, metallic smell of cordite and the thick, choking smell of burning oil, plastic, and metal hung heavy in the air. I heard the people who were shooting at us calling to each other; the language was incomprehensible but the tone, the excitement in their voices that they had Americans cornered, was apparent in their speech.

It was impossible to know exactly what was going on, but there were some things I knew for sure. We were all in some deep shit, the kind of shit you only see in movies. My legs were killing me. We were about to die.

Then I saw an RPG headed for our truck. I watched as it seemed to float on air in a deadly path to the side of our vehicle. I should have screamed a warning at Riley and Hernandez, should have told them to duck, but I watched that rocket headed toward us and simply couldn’t make a sound. Nothing would come out of my mouth. I cringed, ducking my head into my arms, thinking I was about to be incinerated in the approaching explosion. The round hit the side of the truck with a hollow thud and nothing happened. A dud, I thought, but there was too much going on to feel any relief at that stroke of luck.

“We have to surrender,” Riley said. He said it as a matter of fact, as if it were a given. He scanned the area, still calm about everything, as if he thought he was starring in his own movie and wouldn’t be the one to be hit in this climactic scene. I wanted to hit stop, rewind, and go back to that part that didn’t have me in it, but that wasn’t going to happen. I was terrified and surrendering was the last thing I wanted to do, but there was no denying that the three of us cowering under that truck had no way to defend ourselves and two of us were bleeding. Help wasn’t coming. I didn’t expect the cavalry to come charging over the hill. Riley’s idea to surrender, an idea that was unlikely to enter any Hollywood movie star’s dialogue, seemed the only option.

The shooting started to slow down, but that wasn’t good news. The bullets were only coming from the enemy now. No one on our side was shooting anymore.

“They’ve got Miller now,” Riley said. “We have to surrender. There’s nothing else we can do.”

The thought of surrendering petrified me. Interrogations, beatings, torture, rape—all of that flashed through my head.

How the hell did I end up here?

But Riley was right, we had to give up. Just as he had led us to the shelter, he slid back, then stepped out from under it, his hands raised. I held my breath, fearing he might be mowed down in front of us. After several moments no one fired and Riley remained standing, so Hernandez followed him, pushing himself out from under the truck, leaving a trail of blood behind and cradling his wounded arm. He raised his hands and waited for what came next.

I was shaking. I was saying the Lord’s Prayer to myself and rustling up the gumption to push myself out from under the truck, when someone grabbed my legs and pulled me from my shelter.

And like that, I became a prisoner of war. 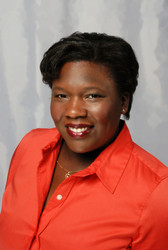 Shoshana Nyree Johnson was born in the Republic of Panama and moved to the United States with her family when she was a child. A second-generation Army veteran, she did not plan a career in the military, but became a JROTC cadet in 1991 and joined the U.S. Army in September 1998 while attending classes at the University of Texas at El Paso (UTEP).

On March 23rd, 2003, during Operation Iraqi Freedom, Shoshana was in a convoy that was ambushed in the city of an-Nasiriyah. Wounded, she and five fellow soldiers were captured and taken as prisoners of war, making world news headlines. The POWs were rescued by U.S. Marines on the morning of April 13, and Shoshana returned to the U.S., retiring from the Army on a Temporary Disability Honorable Discharge in December 2003. Her awards and decorations include the Bronze Star Medal, Purple Heart Medal, and the Prisoner of War Medal. U.S. Army officials also identified Shoshana as the first female POW of Operation Iraqi Freedom, and the first black female POW in U.S. war history.

Shoshana lives in El Paso, Texas with her daughter Janelle, her sisters Nikki and Erika, and two nieces.