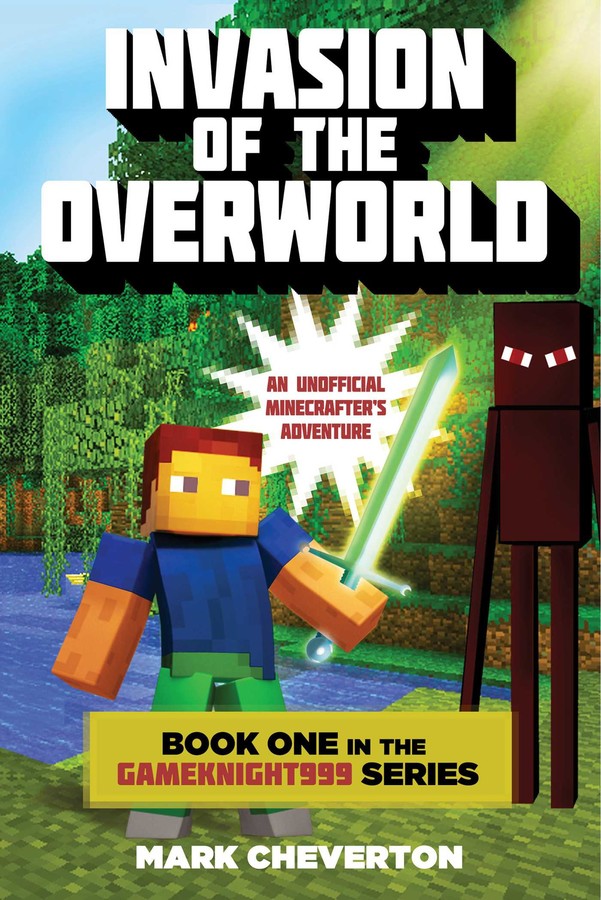 Invasion of the Overworld

Book One in the Gameknight999 Series: An Unofficial Minecrafter's Adventure

Part of Gameknight999 Series
By Mark Cheverton
eBook
Paper Over Board Trade Paperback
LIST PRICE $10.99
PRICE MAY VARY BY RETAILER

A New York Times Best Seller!The world of Minecraft comes to life in this thrilling adventure for boys and girls!

Gameknight999 loved Minecraft, but above all else, he loved to grief—to intentionally ruin the gaming experience for other users. When one of his father’s inventions teleports him into the game, Gameknight is forced to live out a real-life adventure inside a digital world. What will happen if he’s killed? Will he respawn? Die in real life?

Stuck in the game, Gameknight discovers Minecraft’s best-kept secret, something not even the game’s programmers realize: the creatures within the game are alive! He will have to stay one step ahead of the sharp claws of zombies and pointed fangs of spiders, but he’ll also have to learn to make friends and work as a team if he has any chance of surviving the Minecraft war his arrival has started.

This action-packed tribute to the worldwide computer game phenomenon is a runaway publishing smash and the perfect companion for Minecraft fans of all ages.

The gigantic spider approached his hiding place slowly, methodically, its multiple red eyes burning like angry coals at the heart of a smoldering fire. Gameknight999 knew it was coming but was not afraid; his iron armor would protect him. In fact, he wanted the spider to come closer, hoping he had the timing just right. Clicking sounds from the spider floated through the forest trees and reached his ears, getting louder as it neared. Then there were more sounds from its companion; two spiders were now tracking him. Leaning out to look around the trunk of the gnarled tree, he took a quick glance, seeing the arachnid pair searching for him, the monsters peering into dark hollows and leafy shrubs. Moving back behind the tree, Gameknight pulled out a torch and placed it on the ground, the yellow light casting a warm circle of illumination that would be seen by other users. After a few seconds, he dug up the torch with his diamond pickaxe and put it back into his inventory.

That should hopefully attract some attention, he thought to himself.

Drawing his sword, Gameknight started to run out into the open. The two spiders upon seeing him gave chase, and now the sound of a dim-witted zombie added to the voices of pursuit. Sprinting as fast as he could, Gameknight ran around trees and over hills, making sure that his angry friends were still close behind, the hounds still chasing the fox. Then he saw his prey in the distance; two of his own teammates were closing in on his position. Gameknight smiled in anticipation.

Hey, Dreadlord24, Salz, I’m over here, Gameknight typed into chat, his message broadcast to everyone on the server. I need help.

Gameknight looked back and slowed, letting the monsters close the distance a little, the chatter from the spiders getting louder. Looking ahead, he could see that his teammates were right where he wanted them to be.

Stay there, I’ll come to you, Gameknight typed.

Continuing onward, he headed for his two unsuspecting saviors, sprinting in a wide zigzag pattern to give the zombie a chance to catch up; he needed all three of the monsters together for this troll to work. Once the zombie and spiders had caught up, Gameknight ran toward his companions. They were standing atop a hill devoid of trees, with the thick forest surrounding them on all sides. It kinda reminded him of his teacher, Mr. Jameson, his bald head poking out from a ring of hair at the sides.

The monsters were getting a little too close; he had to pay attention or he’d spoil this troll. Focusing on the here and now, he sprinted up the hill, drawing the monsters with him, their hunger for destruction keeping them following obediently. Cresting the hill, Gameknight met his two teammates at the top and then kept running, the ravenous beasts still in tow.

Gameknight, where are you going? Salz asked, confusion clearly voiced in his message. I thought you needed help.

I was wrong, typed Gameknight, it was you who needed help.

Just then, the monsters burst out of the trees and reached the top of the hill, instantly falling on the two players. The spiders both attacked Dreadlord while the zombie slashed out at Salz. These two players were relative noobs, with only leather armor and stone weapons; their lack of experience and foolish trust in Gameknight999 leading to their downfall. Black furry spider legs slashed out at Dreadlord, quickly shredding his armor, their clicking getting louder as they attacked. It almost sounded as if the creatures were excited at the thought of a kill. At the same time, the green arms of the zombie struck out at Salz, hammering him with devastating blows. Dreadlord’s armor failed first, followed by his HP (health points) dropping quickly to zero. Then he disappeared with a pop, his inventory left to bob and float above the ground. Their need for destruction not sated, the spiders then turned their burning eyes onto Salz. Still battling with the zombie, he never saw the spiders jump on him from behind. His HP went to zero quickly. Gameknight stopped to watch the battle, laughing behind his computer screen, a feeling of malicious satisfaction flowing over him. He loved trolling people, even his own teammates.

You suck, Gameknight, Dreadlord typed from jail, the respawn point after your character died in this game of team PvP.

Yeah, thanks a lot, Salz added.

LOL, Gameknight replied then turned and headed back into the heart of the battle.

Minecraft was probably his favorite thing to do. He spent hours down in his basement playing the game, increasing his inventory and prestige on various multiplayer servers, usually at the expense of others. Gameknight was twelve years old and not very big for his age, but in Minecraft that didn’t matter; all that did were armor, weapons, and a ruthless strategy that included sacrificing others to achieve his own aims.

Thinking about these two idiots he’d just trolled and the countless others he’d done the same to in the past, Gameknight999 smiled. Pulling his attention back to the current game, he moved his character back into the fray, looking for more victims. He didn’t care which team they were on. There were still more tricks to play on the other players, and nobody was as good at it as him. He still had one great trick to play on all the users on this server, something that would make people remember the name “Gameknight999.”

Running to the top of a small hill, he could see players in the distance hacking away at each other, their user names glowing white above their square, blocky heads. They were fighting near what looked like a lava river that had an intricately curved stone bridge spanning the molten canal; a work of art that must have taken someone hours to construct. The bridge led to a tall round tower built out of mossy cobblestone and grey stone blocks, the magnificent circular structure stretching up high into the air. At the top of the tower shown a bright white light, a diamond beacon casting a brilliant shaft of light straight up into the blue sky; the end goal of the game. Atop the tower sat a block of white wool, the finish line for the game. Whichever team climbed the tower first and took the fuzzy white block was the winner. From his view, Gameknight could see the players fighting at the end of the bridge, trying to gain control and cross over the lava to get to the tower. Both teams were evenly matched, with no players able to disengage from battle to cross the bridge without getting picked off by archers. That would soon change.

Moving to a copse of trees that stood near the battlefield, Gameknight put away his sword and drew his bow. It shimmered an iridescent blue; the Punch II, Power IV, and Infinity enchantments made it the envy of many players. Scanning the area quickly to make sure there were no mobs nearby, he built a series of blocks beneath him, jumping upward as he placed each stone, raising himself up into the leafy canopy of the nearby trees. This would give him an excellent vantage point from which to fire his bow while still being able to crouch and hide behind the green, blocky tree limbs.

Invasion of the Overworld

Book One in the Gameknight999 Series: An Unofficial Minecrafter's Adventure

Part of Gameknight999 Series
By Mark Cheverton
eBook
Paper Over Board Trade Paperback
LIST PRICE $10.99
PRICE MAY VARY BY RETAILER