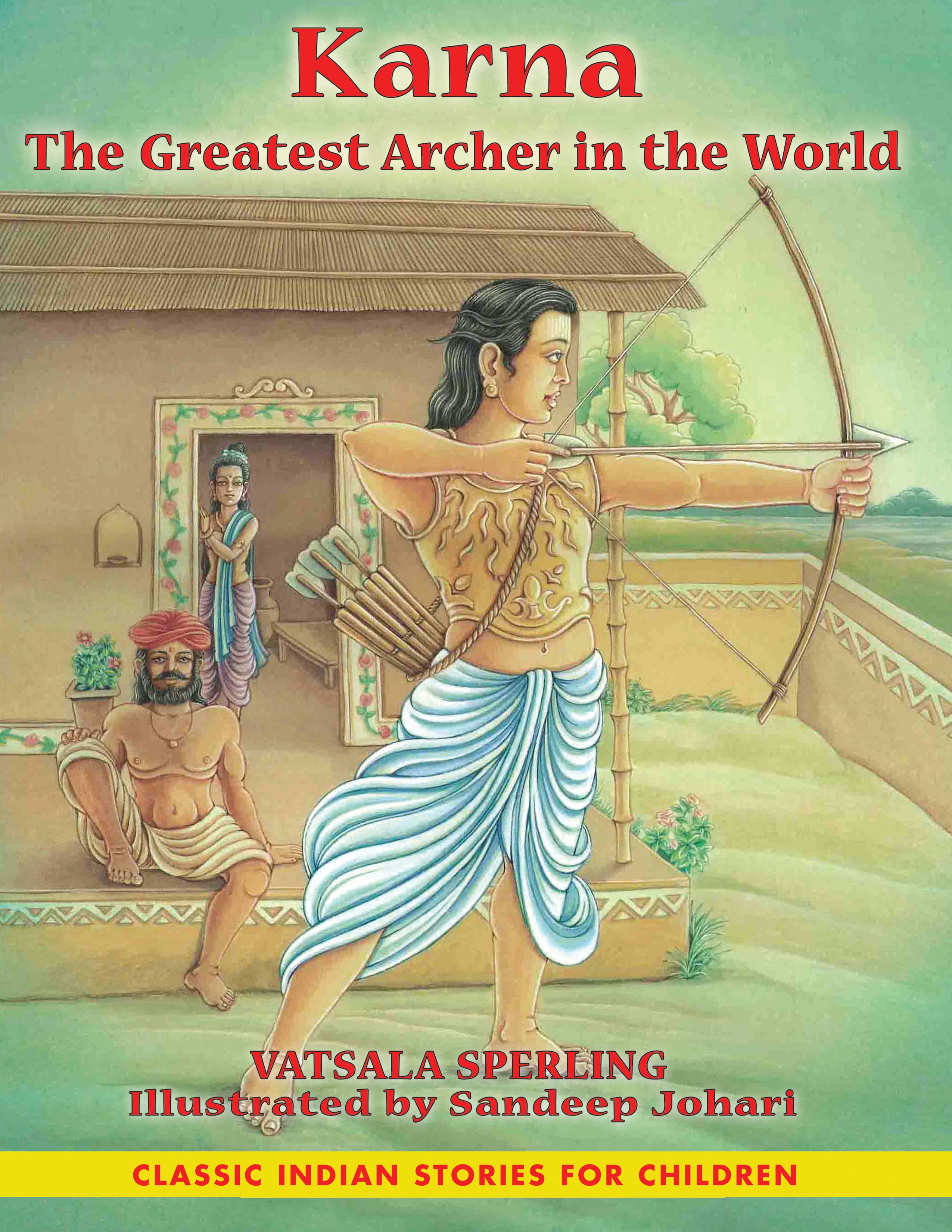 The Greatest Archer in the World

Features Karna, a brave and ambitious character from the epic Mahabharata, as famous for his generosity as for his skills with bow and arrow

• Illustrated throughout with glowing full-color paintings in traditional Indian style

When Princess Kunti is twelve years old she tries reciting a secret mantra for inviting the gods into her life. She gets more than she bargained for when the Sun, himself, swoops down out of the sky in a golden chariot and presents her with a baby. “Take him back,” she cries. “I’m not ready to be a mother!” But it’s too late; the Sun says the baby is her responsibility now. However, he points out the child’s golden earrings and the golden shield upon his chest and tells Kunti that as long he wears them, the child will be protected. Kunti tearfully puts the baby in a basket and sets him afloat on the river, where Adhiratha and Radha, a poor and childless couple, find him and take him in.

Karna: The Greatest Archer in the World introduces the reader to the heroic but humanly flawed character of Karna, who grapples with issues of right and wrong, truth and lies, loyalty and abandonment. It tells how Radha helps her adoptive son, Karna, solve the mystery of his birth; how she and her husband give Karna the courage to follow his heart in the study of archery; how Karna faces his birth mother in the final days of his brief but brilliant life; and how his loyalty to a friend and his unparalleled generosity and sense of honor ultimately cause him to give his own life so that good may triumph over evil.

The Mahabharata is an ancient epic from India that tells of a war between two branches of a royal family. The five Pandava princes fight for justice, goodness, and fairness, while their greedy cousin Duryodhana and his ninety-nine siblings represent the darker side of human nature. Half human and half god, Karna is a member of this warring family, but he doesn’t know it because he has been abandoned at birth.

Adopted by a poor couple, Adhiratha and Radha, Karna is raised with love. Though his adoptive parents know nothing of weapons and warfare, they give Karna the courage to follow his heart’s desire--to become the greatest archer in the world. In return, he honors them above all others despite their humble means. In their loving home, Karna learns to trust his own generous heart when faced with life’s difficult decisions. His heart tells him that promises are meant for keeping and life is meant for giving. Though he always tries to do the right thing, Karna, like all of us, makes mistakes. In the end, his mistakes cost him his very life but they never cost him his honor. He is remembered in India to this day as the greatest archer and the most generous person ever born.

A long time ago, a beautiful young princess named Kunti lived with her uncle, King Kuntibhoj, in a lovely palace along the banks of a wide river. One day when she was twelve years old her uncle said to her, “Kunti, an important visitor will be arriving soon. Sage Durvasa is very learned and we are honored to receive him as our royal guest, but he’s well known for his terrible temper. Child, I’m asking you to make sure all his needs are taken care of. Give him no reason at all to become angry. Please do be careful, Kunti, the future of my kingdom depends on you. Sage Durvasa has the power to put terrible curses on anyone who displeases him!”

“Yes, Uncle,” Kunti promised, and soon she turned herself into the most perfect hostess. She almost read Sage Durvasa’s mind, meeting his every need before he realized anything was wanting. The sage had a very peaceful and happy stay and wanted to reward Kunti for her services. He studied her face and used his magic powers to see into her future. “Child,” he said, “one day you will need the help of the gods. I am going to teach you a secret mantra for inviting the gods into your life. Be very careful with this mantra! Use it wisely.” Kunti repeated the syllables after him. She promised to use the mantra only in times of great need.

But she was only twelve, after all, and a lively and curious girl. Early the next morning she was playing by herself in the royal garden. The sun had risen and Kunti watched as its rays touched a fl ower here, a leaf there. She felt its warmth on her skin. She thought about the Sun God, waking up the whole world. I wonder . . . she thought. I wonder if the Sun would come to me. Forgetting her promise to Durvasa, she began to recite the mantra. She closed her eyes and concentrated the way she had been taught. Soon her body became prickly hot, as if she were sitting by a fire. She could hear the fire roar and crackle! She opened her eyes to see a glowing chariot swooping down from the heavens, pulled by seven horses--and the Sun God himself driving them! “You called me,” Sun said, stepping from the carriage with a baby in his arms. “You called me,” he said again, placing the baby in her lap, “and I bring you my son.”

Kunti looked at the baby. Oh no! she thought. What have I done? “Sun,” she wailed, “I am only twelve years old! I didn’t know what I was doing. Please! Take your baby away!” Her cries mingled with the cries of the infant in her lap. “Please! I am not ready to be a mother!”

“You used the sacred mantra,” the Sun God replied. “The baby is your responsibility now. But I leave him with divine gifts. Look--he has a set of golden earrings and a golden shield on his chest. They will grow with him. So long as he wears them, he cannot be killed.” He sped off into the morning sky, leaving poor Kunti alone with a newborn babe in her arms.

She was panic-stricken. What a string of curses Sage Durvasa would hurl at her now! She would live in shame! Who would ever believe her? Then she looked again at the baby, squirming in her arms, shimmering with celestial light just like his father. She rocked him gently. His cries calmed, and she realized that she had stopped crying too. “Alas, I cannot be your mother,” she said sadly. “I am much too young. I will have to let you go.”

She found a sturdy basket, some wax, and cloth of the softest silk. She coated the basket with the wax to make it waterproof, and lined it with layers of the silk to make it soft and warm. She placed the baby carefully in his new bed and carried the basket to the river. Then she kissed him good-bye and set the basket afl oat. “Farewell,” she whispered. “May the Sun god watch over you always and keep you safe. May you fi nd parents who will love you and care for you. I will always remember you.”

Vatsala Sperling, Ph.D., fluent in a number of Indian languages and Sanskrit, learned these traditional stories at her mother’s feet and enjoys introducing them to children of the Western world. Before marrying and moving to the United States, she was the chief of Clinical Microbiological Services at the largest children’s hospital in India. She is the author of How Ganesh Got His Elephant Head, Ram the Demon Slayer, and Karna: The Greatest Archer in the World. She lives in Vermont with her husband and son.

Sandeep Johari was raised by his uncle Harish Johari, who taught him classical Indian painting. He is the creative director in a graphic design studio in New Delhi, India.

"A welcome introduction to other cultures for young readers, illustrated in a style reminiscent of traditional Indian artwork. . . . Highly recommended."

"The book is an excellent read. It addresses the problem faced by the adopted children who don't know their birth origin and are often discriminated."

"A skillful retelling of an old story!"

" . . . such stories brought out from ancient Epic Mahabaharata will surely be helpful to all students who can learn the moral values of human life."

– Shankerprasad S. Bhatt, author Prayers of All Religions of the World (three volumes)

" . . . raises many issues of right, wrong, and loyalty and abandonment in a gentle folk story packed with insights perfect for discussion."

"Full of interesting characters and situations, the story is preceded by a useful cast of characters to help readers keep track of Karna's adventures. Colorful, traditional illustrations add interest to this long and detailed epic."

– Venture Into Cultures, publication of the American Library Association, Nov 2008

"This action-packed story introduces children to the heroic but flawed Karna. The dramatic retelling of a traditional story from India's ancient epic, Mahabharata, will capture the imaginations of children everywhere."

"It introduces children to one of the most colorful characters of Hindu mythology, Karna, and his inner struggles. Karna, abandoned by his mother, encounters many issues, including knowing nothing about his adoptive or biological parents."

The Greatest Archer in the World