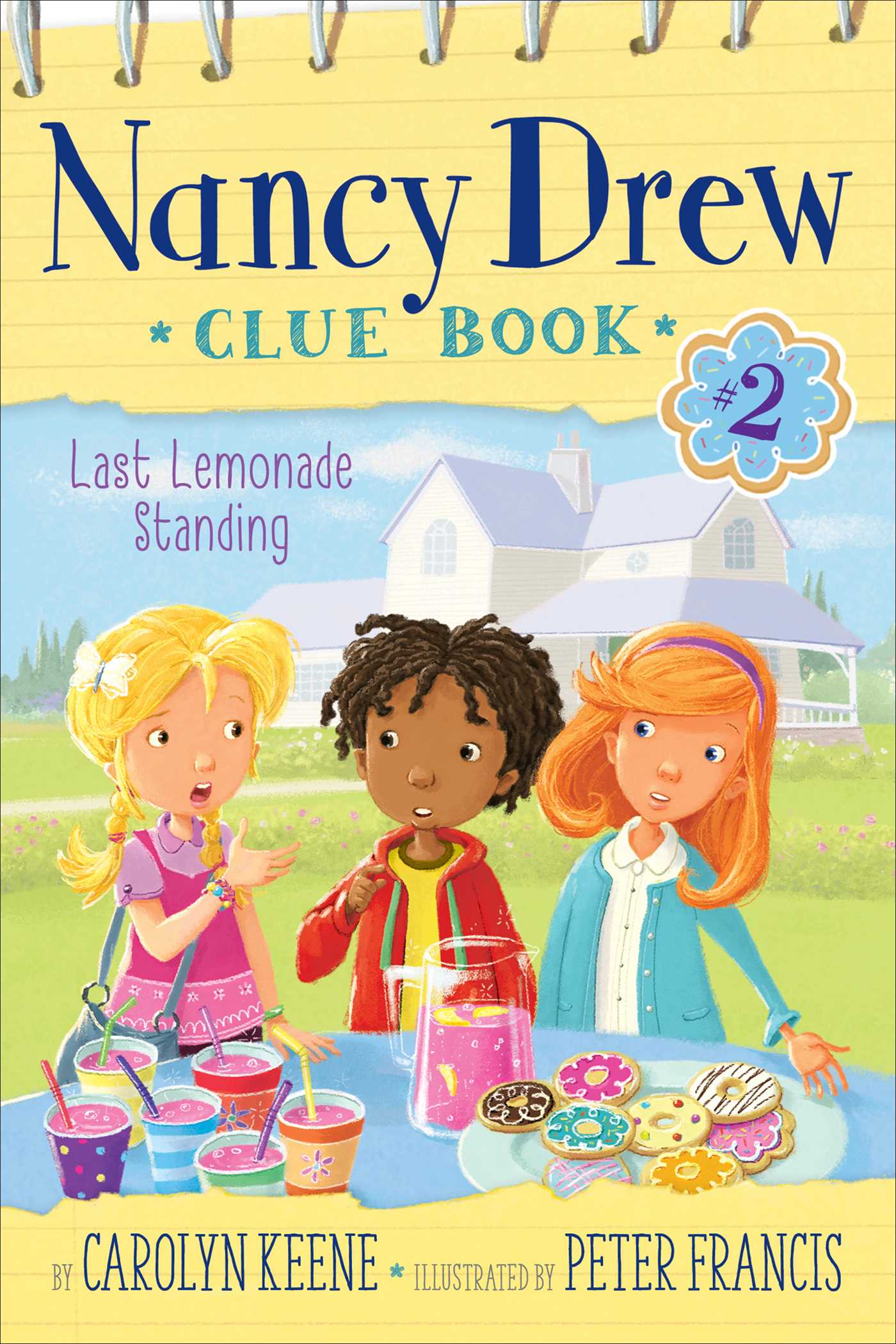 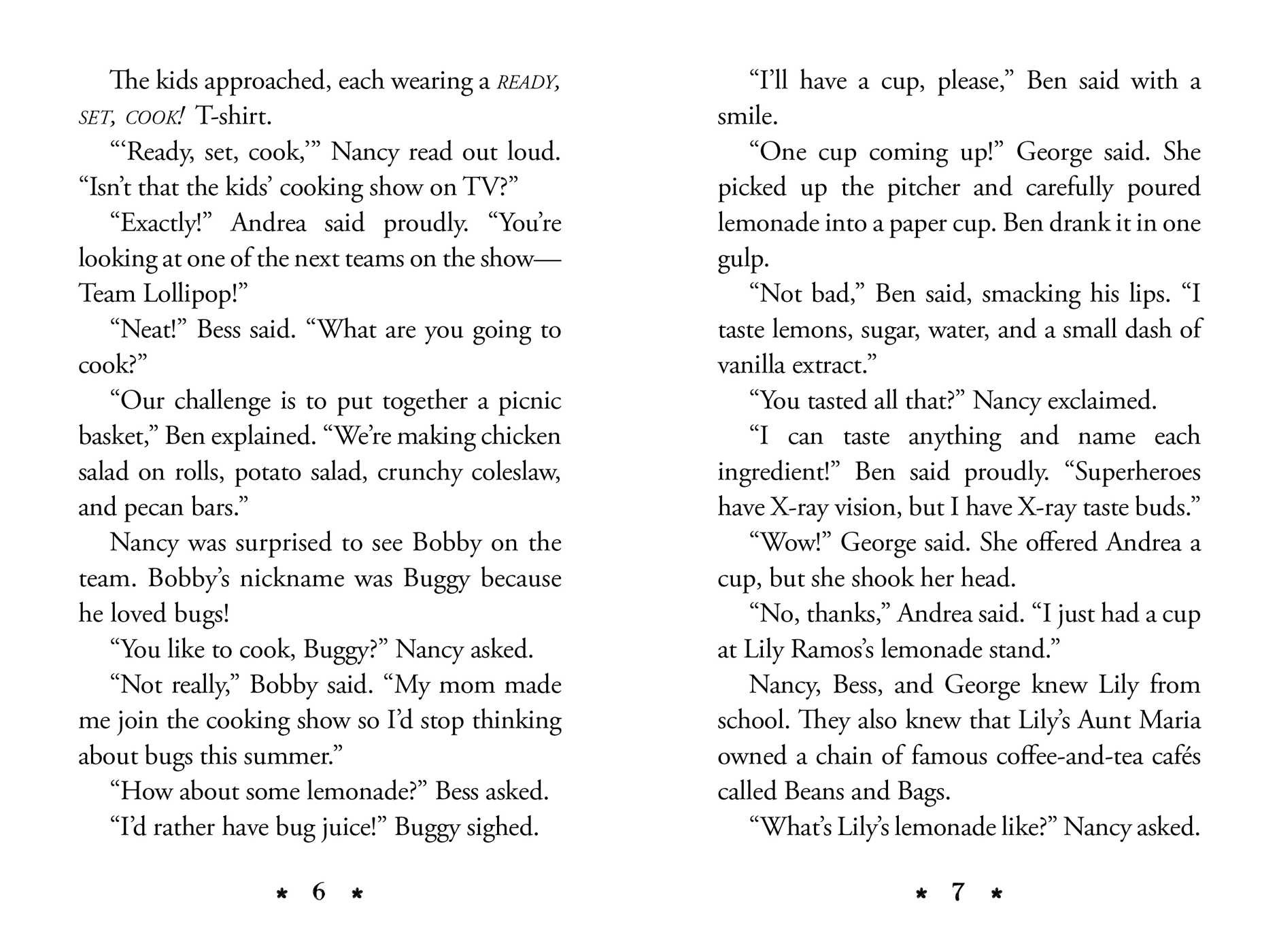 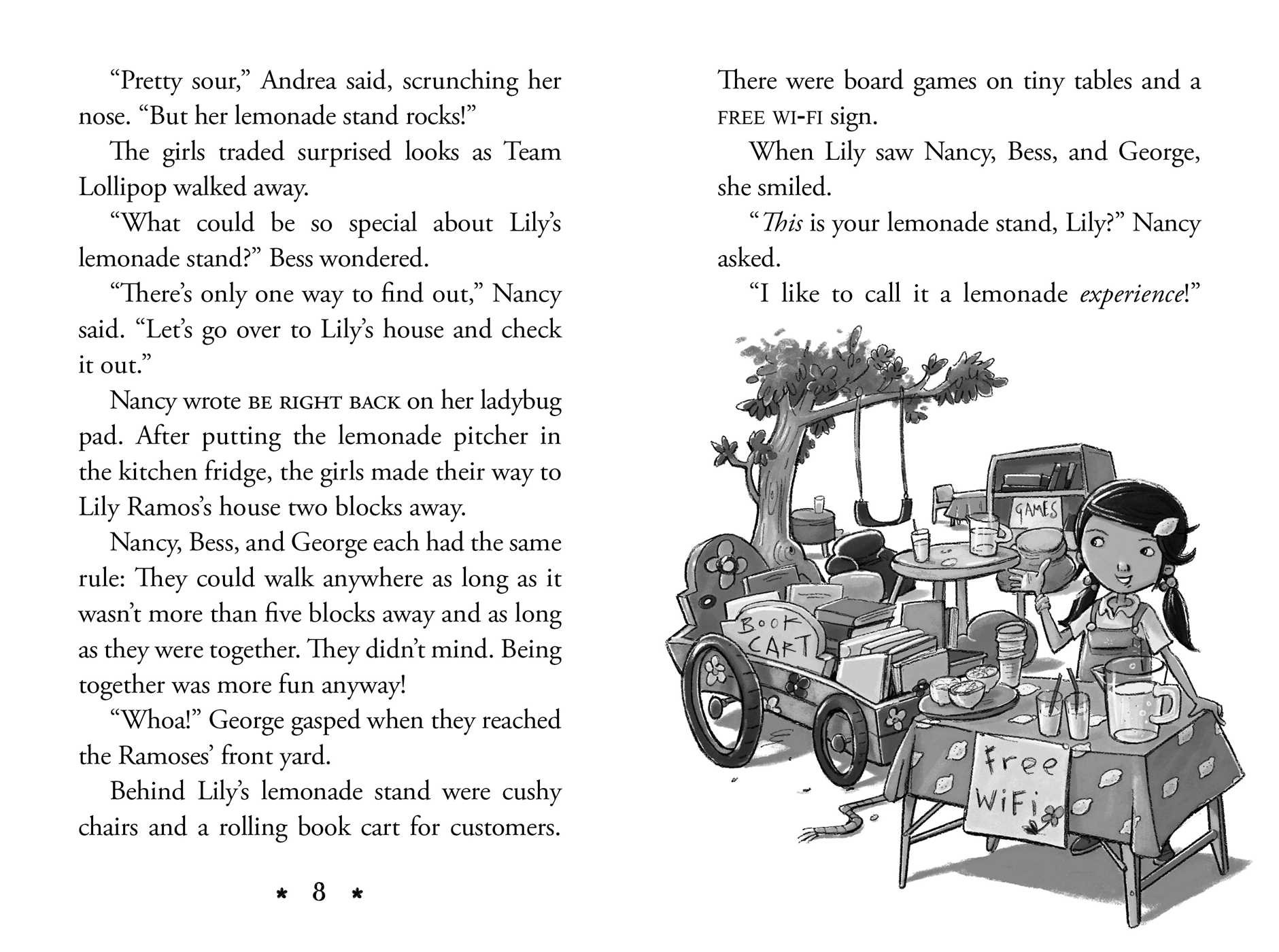 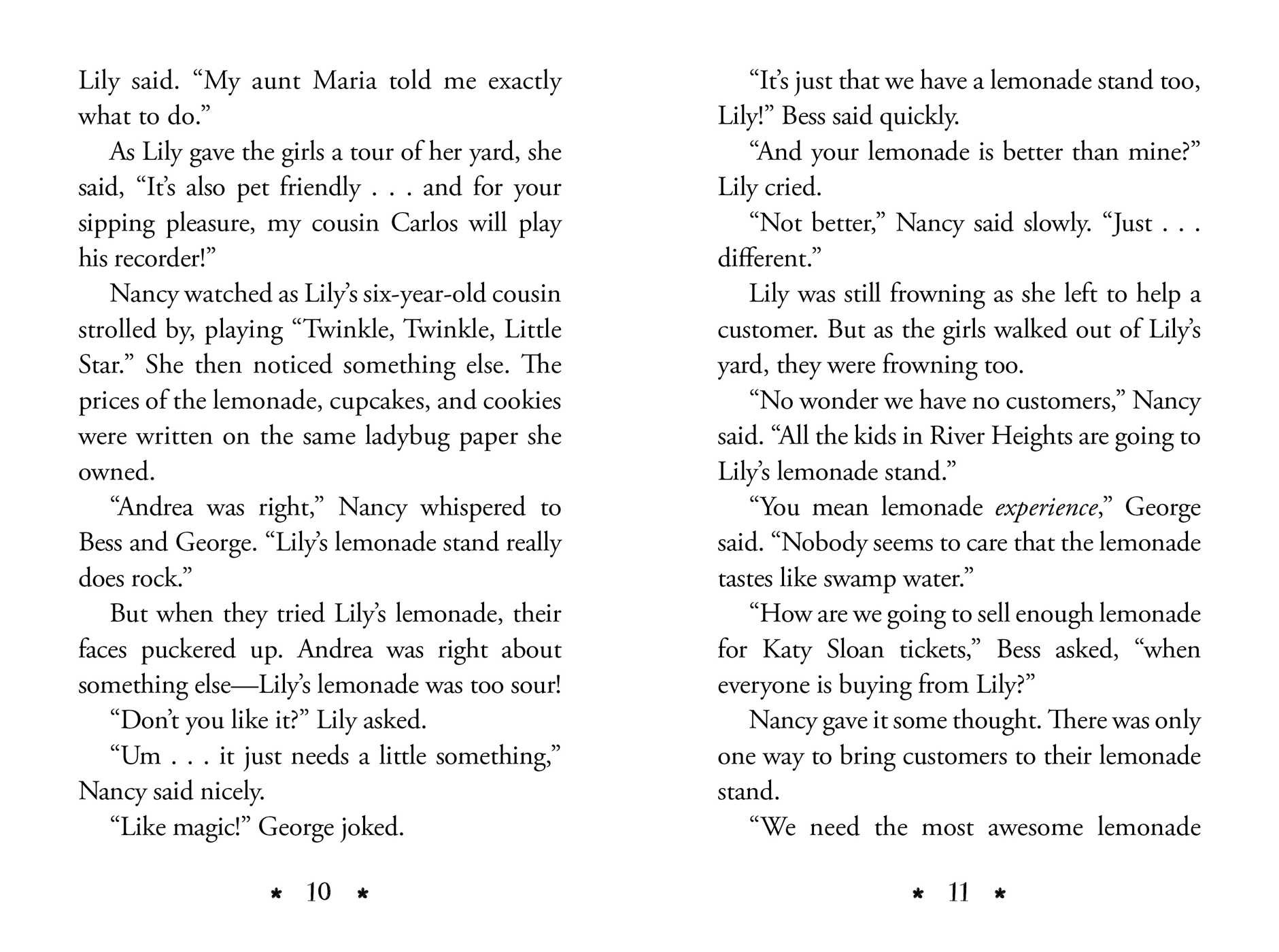 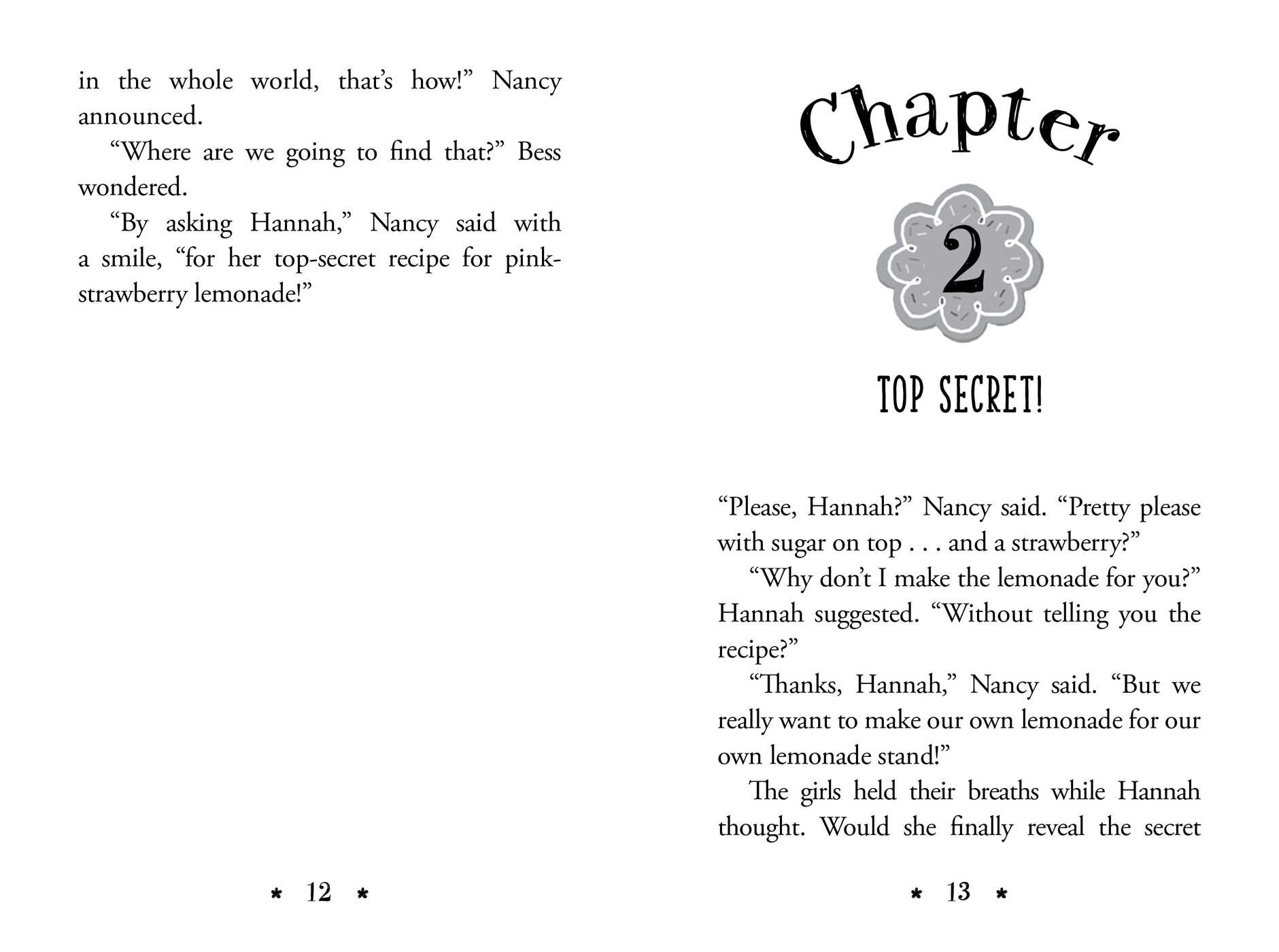 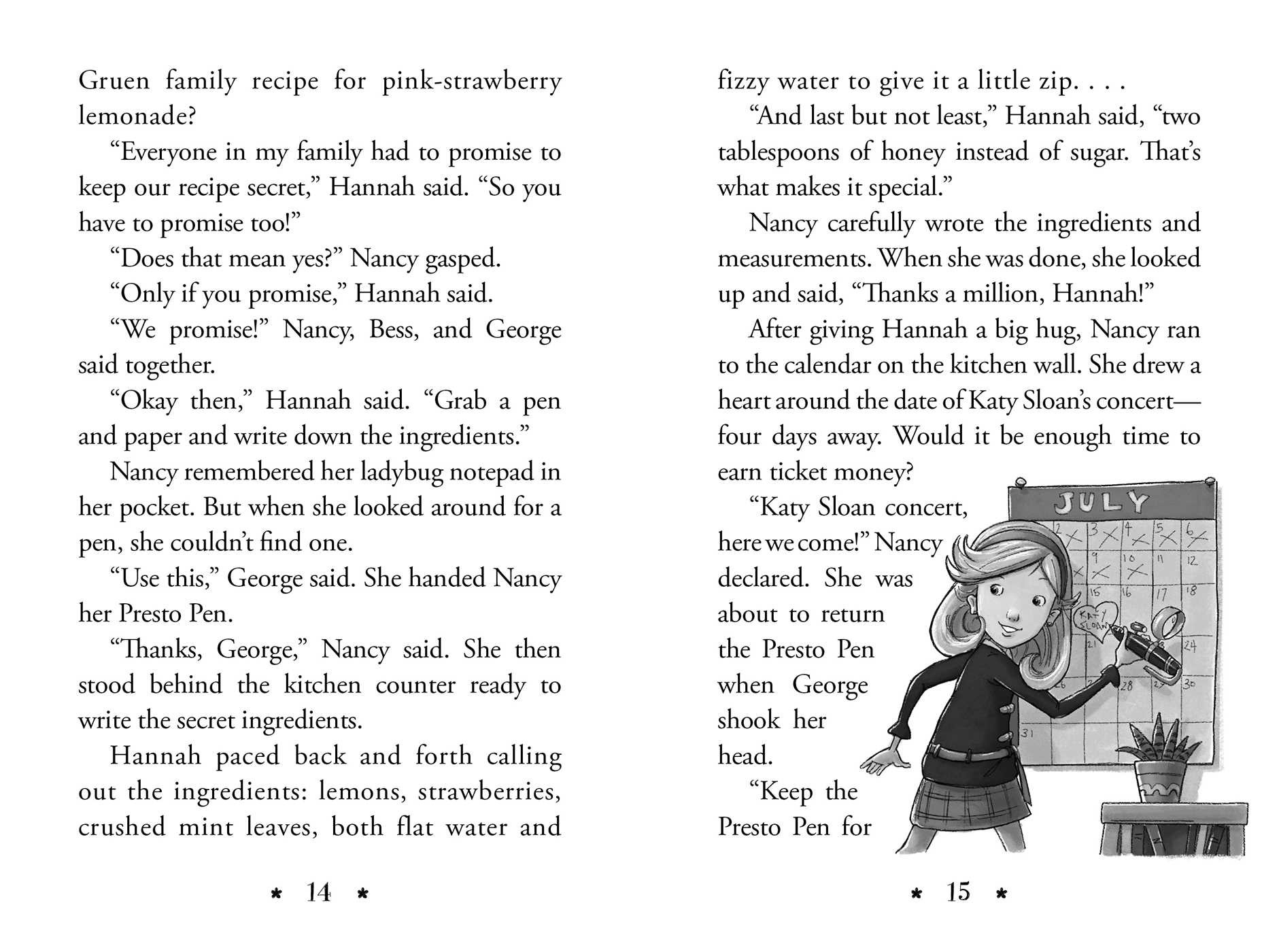 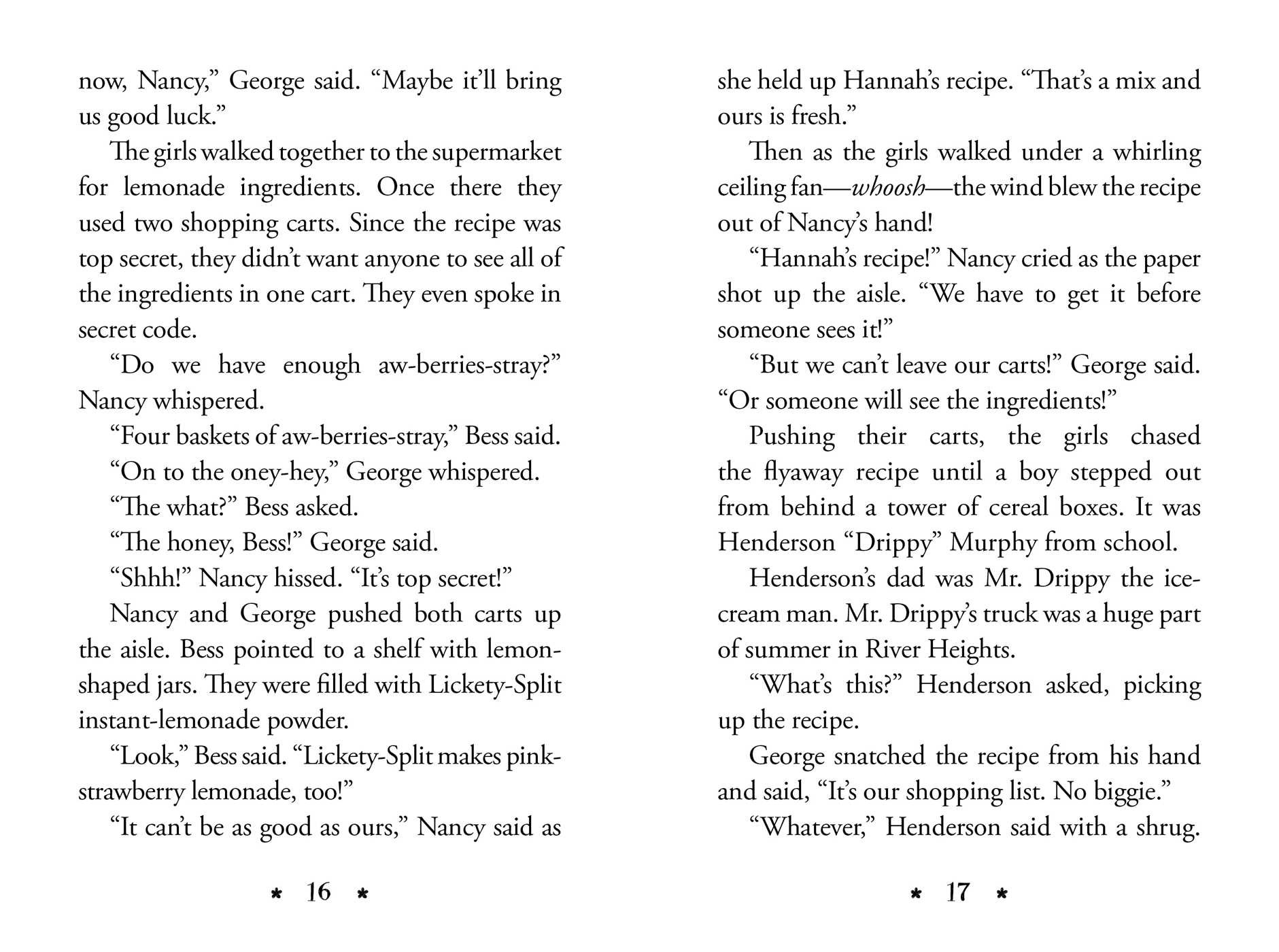 Help investigate the case of a missing lemonade recipe with Nancy and her friends in the second book in an all-new, interactive Nancy Drew chapter book series. Includes space for readers to jot down their own ideas and solutions to the case!

Nancy, Bess, and George want tickets to see pop singer Katy Sloan play at the River Heights Amusement Park—but their parents say they’ve already filled their summer theme-park quota. So the girls decide to turn lemons into lemonade by earning their own tickets—with a lemonade stand!

Unfortunately Lily Ramos, a new girl in River Heights, has the same idea. She’s the niece of the owner of the town’s newest and hottest café, and her stand is equipped with café tables, gourmet treats, and a rolling library cart! Good thing Nancy has a secret weapon: Hannah’s family lemonade recipe!

The girls are all set to whip up the lemonade—until the recipe is replaced by a blank sheet of paper! Nancy, Bess, and George set out to find the thief! Could it be Lily, whose stand may be fancy but whose lemonade is totally yucky? Or a sneaky contestant on Ready, Set, Cook!, the hot new kids’ cooking contest show? It’s up to the Clue Crew—and you—to find out!

Nancy sat with her two best friends behind their lemonade stand. The table holding a pitcher of lemonade and paper cups was set up in the Drews’ front yard.

Nancy counted the few quarters and dimes in a glass jar. She then wrote the total on her favorite writing pad with the ladybug design.

Bess and George sighed too. Katy Sloan was their favorite singer. When they had heard that Katy’s next concert would be at the River Heights Amusement Park, they knew they had to go. But Nancy, Bess, and George had already gone to the amusement park twice that summer to ride the rides. Both times their parents had paid for the tickets. So they would have to buy these tickets with their own money.

That’s when Nancy had the idea for a lemonade stand. They even taped a picture of Katy to the table to make them work harder! Bess had written the date of the concert right on it.

“And I know our lemonade is good enough,” Bess insisted. “I got the recipe from my Pixie Scout cookbook!”

Nancy glanced over her shoulder at her house.

“If only Hannah would give us her top-secret recipe for pink-strawberry lemonade,” Nancy said. “It’s awesome!”

“Even from you?” George asked Nancy. “Hannah has been your housekeeper since you were four years old.”

“Three years old!” Nancy corrected. “And Hannah is more than a housekeeper—she’s like a mother to me.”

“Then why won’t she give you her recipe?” Bess asked.

“I told you, it’s top secret!” Nancy said. She flashed a little smile. “Even from detectives like us!”

When Nancy, Bess, and George weren’t selling lemonade they were part of a detective club called the Clue Crew. Nancy even had a special Clue Book so she could write down clues and suspects.

“Speaking of detective stuff,” George said with a smile. “I joined the Spy Girl Gadget of the Month Club.”

“You joined a club without us?” Bess gasped. “But Nancy is your best friend—and I’m your best cousin!”

“Are you sure you two are cousins?” Nancy joked.

Bess and George were cousins, but totally different.

Bess had blond hair, blue eyes, and a closet full of fashion-forward clothes. George had dark hair and eyes and liked her nickname better than her real name, Georgia. George’s closet was full too—with electronic gadgets!

“The Spy Girl Gadget of the Month Club isn’t really a club, Bess,” George explained. “I just get a new spy gadget in the mail once a month.”

“What does it do?” Nancy asked.

“I don’t know,” George admitted. “I think my little brother, Scott, took the instructions—just like he takes everything else that belongs to me—”

Nancy turned to see where Bess was pointing. Walking toward their lemonade stand were Andrea Wu, Bobby Wozniak, and Ben Washington from their third-grade class at school.

“Customers!” Nancy said. She smoothed her reddish-blond hair with her hands and whispered, “Everybody, smile!”

The kids approached, each wearing a ready, set, cook! T-shirt.

“Exactly!” Andrea said proudly. “You’re looking at one of the next teams on the show—Team Lollipop!”

Nancy was surprised to see Bobby on the team. Bobby’s nickname was Buggy because he loved bugs!

“Not really,” Bobby said. “My mom made me join the cooking show so I’d stop thinking about bugs this summer.”

“How about some lemonade?” Bess asked.

“One cup coming up!” George said. She picked up the pitcher and carefully poured lemonade into a paper cup. Ben drank it in one gulp.

“Not bad,” Ben said, smacking his lips. “I taste lemons, sugar, water, and a small dash of vanilla extract.”

“You tasted all that?” Nancy exclaimed.

“I can taste anything and name each ingredient!” Ben said proudly. “Superheroes have X-ray vision, but I have X-ray taste buds.”

“Wow!” George said. She offered Andrea a cup, but she shook her head.

“No, thanks,” Andrea said. “I just had a cup at Lily Ramos’s lemonade stand.”

The girls traded surprised looks as Team Lollipop walked away.

“What could be so special about Lily’s lemonade stand?” Bess wondered.

“There’s only one way to find out,” Nancy said. “Let’s go over to Lily’s house and check it out.”

Nancy wrote BE RIGHT BACK on her ladybug pad. After putting the lemonade pitcher in the kitchen fridge, the girls made their way to Lily Ramos’s house two blocks away.

Nancy, Bess, and George each had the same rule: They could walk anywhere as long as it wasn’t more than five blocks away and as long as they were together. They didn’t mind. Being together was more fun anyway!

“Whoa!” George gasped when they reached the Ramoses’ front yard.

Behind Lily’s lemonade stand were cushy chairs and a rolling book cart for customers. There were board games on tiny tables and a FREE WI-FI sign.

When Lily saw Nancy, Bess, and George, she smiled.

“This is your lemonade stand, Lily?” Nancy asked.

“I like to call it a lemonade experience!” Lily said. “My aunt Maria told me exactly what to do.”

As Lily gave the girls a tour of her yard, she said, “It’s also pet friendly . . . and for your sipping pleasure, my cousin Carlos will play his recorder!”

Nancy watched as Lily’s six-year-old cousin strolled by, playing “Twinkle, Twinkle, Little Star.” She then noticed something else. The prices of the lemonade, cupcakes, and cookies were written on the same ladybug paper she owned.

But when they tried Lily’s lemonade, their faces puckered up. Andrea was right about something else—Lily’s lemonade was too sour!

“It’s just that we have a lemonade stand too, Lily!” Bess said quickly.

“And your lemonade is better than mine?” Lily cried.

Lily was still frowning as she left to help a customer. But as the girls walked out of Lily’s yard, they were frowning too.

“No wonder we have no customers,” Nancy said. “All the kids in River Heights are going to Lily’s lemonade stand.”

“You mean lemonade experience,” George said. “Nobody seems to care that the lemonade tastes like swamp water.”

“How are we going to sell enough lemonade for Katy Sloan tickets,” Bess asked, “when everyone is buying from Lily?”

Nancy gave it some thought. There was only one way to bring customers to their lemonade stand.

“We need the most awesome lemonade in the whole world, that’s how!” Nancy announced.

“Where are we going to find that?” Bess wondered.

“By asking Hannah,” Nancy said with a smile, “for her top-secret recipe for pink-strawberry lemonade!”
Carolyn Keene

Peter Francis lives in Brighton, UK, where he spent a number of years as an illustrator for children’s television before turning to books. When not painting in his studio, he enjoys long coastal walks, exploring local history, and growing vegetables.