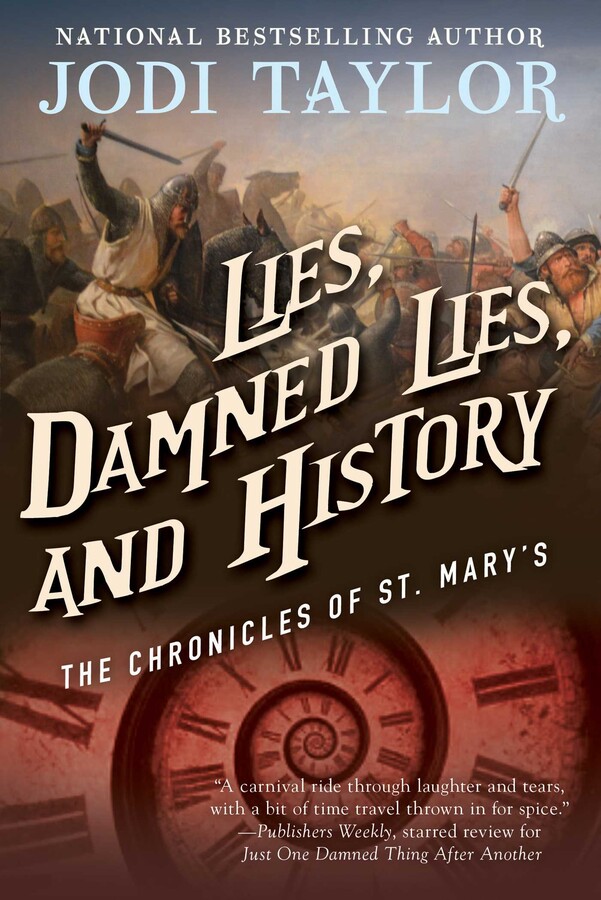 The seventh book in the bestselling British madcap time-travelling series, served with a dash of wit that seems to be everyone’s cup of tea.

Behind the seemingly innocuous facade of St. Mary’s Institute of Historical Research, a different kind of academic work is taking place. Just don’t call it “time travel”—these historians “investigate major historical events in contemporary time.” And they aren’t your harmless eccentrics either; a more accurate description, as they ricochet around history, might be unintentional disaster-magnets.

The Chronicles of St. Mary’s tells the chaotic adventures of Madeleine Maxwell and her compatriots—Director Bairstow, Leon “Chief” Farrell, Mr. Markham, and many more—as they travel through time, saving St. Mary’s (too often by the very seat of their pants) and thwarting time-travelling terrorists, all the while leaving plenty of time for tea.

“I’ve done some stupid things in my time. I’ve been reckless. I’ve broken a few rules. But never before have I ruined so many lives or left such a trail of destruction behind me.”

As Max would be the first to admit, she’s never been one for rules. But in Lies, Damned Lies, and History, she’s gone too far and now everyone is paying the price. Grounded until the end of time, how can she ever put things right?

Skyhorse Publishing, under our Night Shade and Talos imprints, is proud to publish a broad range of titles for readers interested in science fiction (space opera, time travel, hard SF, alien invasion, near-future dystopia), fantasy (grimdark, sword and sorcery, contemporary urban fantasy, steampunk, alternative history), and horror (zombies, vampires, and the occult and supernatural), and much more. While not every title we publish becomes a New York Times bestseller, a national bestseller, or a Hugo or Nebula award-winner, we are committed to publishing quality books from a diverse group of authors.

More books in this series: Chronicles of St. Mary's