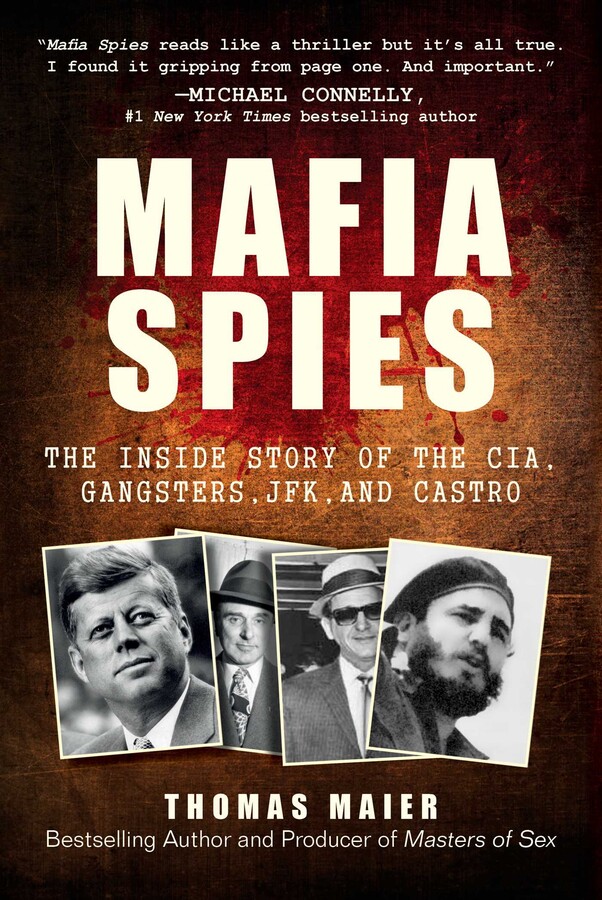 The Inside Story of the CIA, Gangsters, JFK, and Castro

From bestselling author and the producer of the hit cable series Masters of Sex, Thomas Maier, comes a true story of espionage and mobsters, based on the never-before-released JFK Files.

From Vegas to Miami to Havana, the shocking connections between the CIA, the mob, and Sinatra’s Rat Pack—with new revelations and details. Mafia Spies is the definitive account of America’s most remarkable espionage plots ever—with CIA agents, mob hitmen, “kompromat” sex, presidential indiscretion, and James Bond-like killing devices together in a top-secret mystery full of surprise twists and deadly intrigue.

In the early 1960s, two top gangsters, Johnny Roselli and Sam Giancana, were hired by the CIA to kill Cuba’s Communist leader, Fidel Castro, only to wind up murdered themselves amidst Congressional hearings and a national debate about the JFK assassination.

Now for the first time in paperback, Mafia Spies revolves around the outlaw friendship of these two mob buddies and their fascinating world of CIA spies, fellow Mafioso in Chicago, Cuban exile commandos in Miami, beautiful Hollywood women, famous entertainers like Frank Sinatra’s Rat Pack in Las Vegas, Castro’s own spies in Havana and his double agents hidden in Florida, J. Edgar Hoover’s FBI snooping, and the Kennedy administration’s “Get Castro” obsession in Washington.

Thomas Maier is among the first to take full advantage of the National Archives’ 2017–18 release of the long-suppressed JFK files, many of which deal with the CIA’s top secret anti-Castro operation in Florida and Cuba. With several new investigative findings, Mafia Spies is a spy exposé, murder mystery, and shocking true story that recounts America’s first foray into the assassination business, a tale with profound impact for today’s Trump era. Who killed Johnny and Sam—and why wasn’t Castro assassinated despite the CIA’s many clandestine efforts?

Thomas Maier is an award-winning author, journalist, and television producer. His book Masters of Sex was the basis for the Emmy-winning Showtime drama that ran for four seasons. His other books include When Lions Roar: The Churchills and the Kennedys; The Kennedys: America's Emerald Kings; Dr. Spock: An American Life (named a "“Notable Book of the Year" by the New York Times); and Newhouse: All the Glitter, Power and Glory of America's Richest Media Empire and the Secretive Man Behind It (winner of the Frank Luther Mott Award as Best Media Book of the Year presented by the National Honor Society in Journalism and Mass Communication). He has worked as an investigative reporter for Newsday for over thirty years.

"Enormously fun...This is a standout in the field of spy nonfiction. Fans of The Godfather movies and of spy novels in general will
love how Maier portrays the ties between Sinatra and Giancana, the lush mobster weddings, and the intricate web of deception that drew so many, including Marilyn Monroe, into the mix. Maier succeeds brilliantly here in bringing this outrageous, long-hidden (if rumored) bit of history to vivid and fact-supported life."
—Booklist (starred review).

“Just when you think you’ve read and heard everything there is to know about the CIA, JFK, and the mob, along comes Thomas Maier with this meticulously researched and nuanced report that sets the record straight in some areas and breaks new ground in others. Mafia Spies reads like a thriller but it’s all true. I found it gripping from page one. And important. The events reported on here changed history and give us better understanding of current times.”
—Michael Connelly, #1 New York Times bestselling author

“Mafia Spies is one of those stories that is truly more amazing than fiction, about an unlikely alliance between America’s best and worst.  The tale is told at a relentless pace and makes great reading.”
—Scott Turow, bestselling author of Presumed Innocent, The Burden of Proof, Identical, Innocent and more

"From CIA secret labs creating assassination tools first dreamed up by Ian Fleming in his James Bond novels, to poisoned cigars, exploding cats, Frank Sinatra, and two of the most well-connected mafioso in gangland history, Thomas Maier’s Mafia Spies is a revealing look into one of the most outrageous spy tales of the twentieth century. If you are unfamiliar with Sam Giancana and Johnny Roselli, and their connection to everyone from low-life mob hucksters to JFK, this is a book that will open your eyes to a world of political intrigue that reaches into the depths and heights of mid-twentieth century American culture. Maier’s knowledge of politics and of gangland lore is impressive, and he uses it here to great effect in Mafia Spies, a work that reads like a novel but is, amazingly, a nonfiction tale of mobsters working for the CIA to assassinate Fidel Castro. If Mario Puzo were more interested in journalism than fiction, this unrelenting page turner is the book he would have written instead of The Godfather.”
—Ed Falco, New York Times bestselling author of The Family Corleone

“The United States doesn’t order foreign leaders killed. Unless it does. And it did in 1960 when the CIA took the unthinkable step of recruiting two Mafiosi—Sam Giancana and John ‘Handsome Johnny’ Roselli—to murder Cuban Premiere Fidel Castro. The existence of this misbegotten plot was exposed in the 1970s during Senate hearings after the assassination of JFK, but we’ve been denied a full accounting until now. Drawing upon documents recently released by the National Archives, Thomas Maier spins a vigorously picaresque tale of the hoodlums and their handlers as they make run after failed run at the Cuban premiere with such lunatic ploys as exploding cigars and contaminated scuba gear. Castro’s crack intelligence network in Miami allowed him to dodge every bullet. The strength of Maier’s account is that he delivers such richly detailed profiles of the players that they seem to unfold in three dimensions. Often frightening, at times hilarious, this is a cautionary tale for anyone thinking it might be a good idea to ‘outsource’ intelligence operations. Mafia Spies is a bracing read and I enjoyed it thoroughly.”
—Teresa Carpenter, Pulitzer Prize winner and author of four books, including Mob Girl: A Woman's Life in the Underworld

“This story exposes a dark chapter in America’s history, when the CIA teamed up with murderous Mafia hitmen in an ill-fated assassination plot. Thoroughly reported and masterfully written, Maier delves deep into a world of political intrigue and underworld brutality. It’s a riveting, must-read."
—Shelley Murphy, co-author of the New York Times bestseller Whitey Bulger: America’s Most Wanted Gangster and the Manhunt That Brought Him to Justice

“Meticulously researched and sourced, Mafia Spies, the compelling history of the pact between the CIA and Mafia to assassinate Fidel Castro, reads like a bestselling thriller. Thomas Maier’s swashbuckling story-telling takes you into a clandestine, paradoxical world where gangsters were patriots, spies were hapless bureaucrats, and political deception and murder were the prevailing currencies. For those who study US foreign and domestic intelligence practices during the second half of the last century, this is a must-read.”
—Libby Fischer Hellmann, author of High Crimes and Havana Lost

“Mafia Spies shows how the CIA and the Mafia colluded in a wild 1960s scheme to kill Fidel Castro, covered it up for years, and eventually paid an awful price. Investigative reporter Thomas Maier reveals many new aspects of America's most extensive and shocking spy scandal. As a real-life drama, this non-fiction book blends the mob violence and intrigue of The Godfather with the CIA thriller-like quality of TV's Homeland.”
—Gerard Ryle, director of the International Consortium of Investigative Journalists, 2017 Pulitzer Prize winner, “The Panama Papers”

“This is Thomas Maier’s epic story of the CIA and the mobsters recruited to assassinate Fidel Castro in the 1960s. Maier’s spotlight sweeps across America, casting its sharp focus from Frank Sinatra and the Rat Pack to the lesser stars and starlets of Hollywood to Havana and finally to the White House itself. Maier’s prodigious storytelling ability recreates a shocking moment in US history with unprecedented detail and drama, from the bungled attempt to assassinate Fidel Castro to the real possibility that John Kennedy himself was caught in the same seedy web.”
—Peter Eisner, author of MacArthur’s Spies, former Washington Post deputy foreign editor, and co-author of The Shadow President

The Inside Story of the CIA, Gangsters, JFK, and Castro