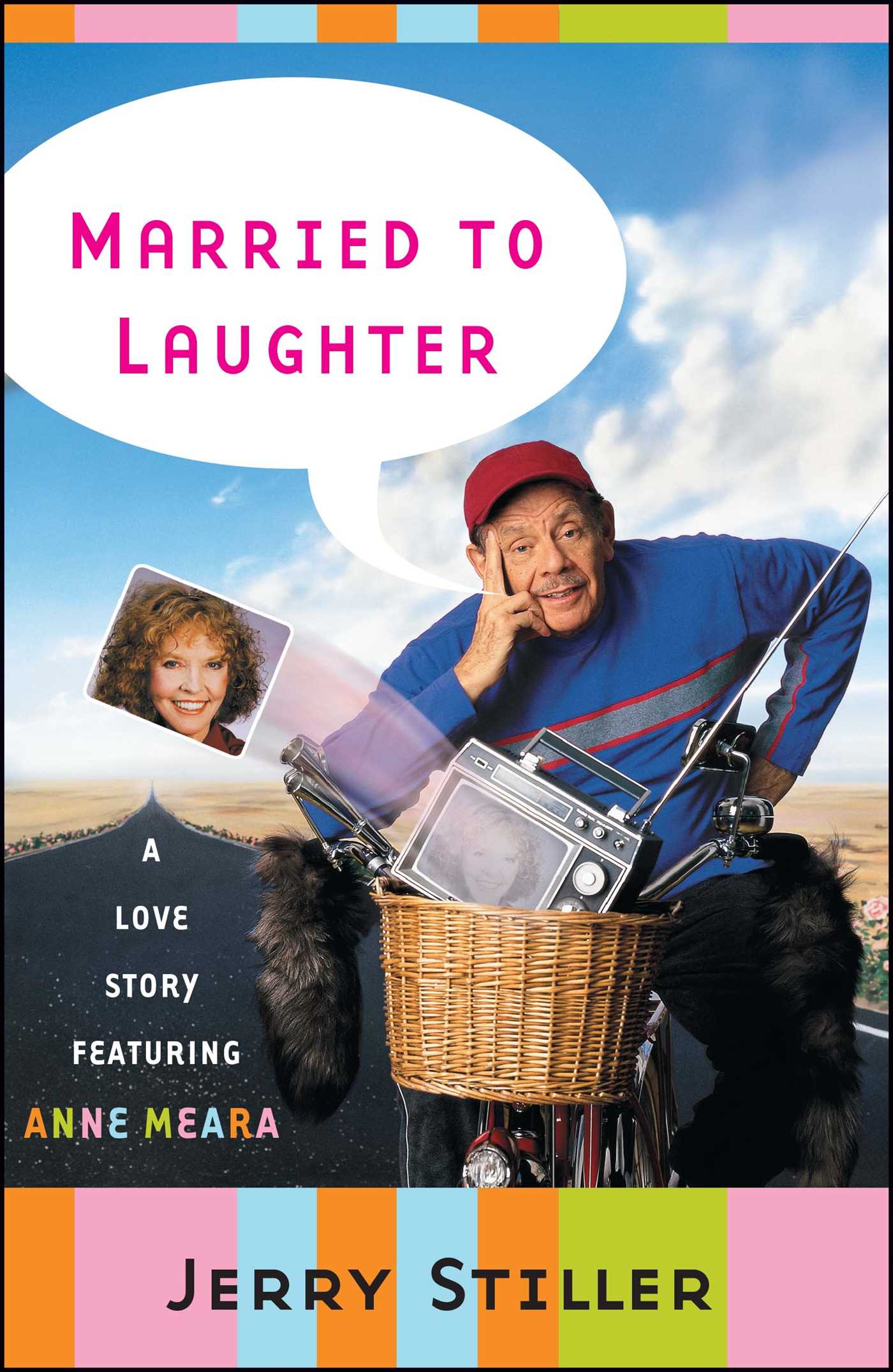 From his initial success in the coffeehouses of Greenwich Village with Anne Meara, who would be the love of his life, to his serenity-seeking days on Seinfeld and later on The King of Queens, Jerry Stiller has consistently proven himself to be a force in showbiz. In Married to Laughter, he brings us into his world and recounts, in a tone that is laugh-out-loud funny and strikingly honest, his passion for entertainment and working with people such as Ed Sullivan, Mike Nichols, Robin Williams, and Jerry Seinfeld, who were there along the way.
At the heart of this tale is Stiller's partnership, both onstage and off, with Anne Meara. He shares the affectionate story of their long-surviving relationship, spotlighting the pleasures and challenges of raising a family in an interfaith show business marriage.
Married to Laughter is the story of an actor who never let go of his dreams, but ultimately it is the story of two people who found their place in show business without losing sight of each other.

In 1953, I was in New York City looking for work. I was making rounds with Bea Mortensen, a tall, lovely, redheaded actress. I thought we'd be terrific doing an act together. That wasn't all I wanted to do with Bea. She sensed that my hanging out with her was not solely in hope of theatrical employment, but I never made an overt pass and did everything to disguise my biological feelings.

We'd walk down Broadway holding hands, she in two-inch heels and me in my Keds, sending out a message: "See, we're just two crazy show-business people." Bea's making rounds with me must have hinged on some bizarre expectation of hers that we'd actually strike it rich one day.

On this spring afternoon we arrived at a casting cattle call in an agent's office. The place was full of chattering hopefuls seeking employment in a summer-stock company. As we waited our turn, Bea recognized a friend of hers, a tall girl, though not quite Bea's height, with auburn hair and an angelic face. They got talking just as the receptionist announced that the agent would start seeing people. I was sandwiched between them. The conversation proceeded as if I weren't there.

"Hi," I said, extending my hand in a kind of manly way. The angel-faced girl shook it. She looked sort of puritanical and smelled nice. She was wearing Mary Chess perfume, I later learned.

"That's me," the girl said. "I already know I'm too tall to play the ingenue and too young to be a character woman."

"Okay, wish me luck," she said, disappearing into the inner office.

Bea looked at me soulfully and said, "That's a nice girl." I knew instantly that this was the kiss-off. "You'll like her," Bea said. "She's a very sweet girl." I felt like a baseball card being traded.

Before I could fully comprehend that Bea's and my relationship had ended, the agent's door flew open and Anne Meara, in tears, burst back into the room.

"What happened?" everyone asked.

"He chased me. He chased me all around the desk," she said. Her face was flushed. "I think I'm going back to Rockville Centre. My father told me New York was a tough place."

"Who's next?" the secretary said. "Who's Jerry Stiller?"

I'd seen this agent on many occasions, and he'd always paid me the courtesy of saying hello. His walls were full of pictures of stars he claimed he handled. He wore a houndstooth sports jacket and always seemed to be on vacation.

He was basically harmless, but he also loved to play practical jokes on me, Once he asked me to light his cigar. I hesitated, "Light it," he snapped. When I struck the match, it flared brightly. He went into hysterical laughter.

Today he asked, "What have you been up to these days?"

Suddenly, acting heroic, I asked, "Why did you chase that girl around the desk?"

"Because I liked her," he replied with great aplomb. "And I like you too. Now it's your turn." He started chasing me around the room, laughing uproariously as I ran for the door. "Nothing for you this time," he said, as I exited into the waiting room, where Anne was still recovering.

Bea indicated none too subtly that she herself had an appointment and suggested that perhaps I'd like to take Anne for a cup of coffee to help her recover her faculties. I looked at Bea sheepishly, still trying to fathom why I was being ditched.

I asked Anne if she would like a cup of coffee, and she said yes.

We walked to Longley's Cafeteria. I had barely enough money on me to pay for anything more than coffee and cake.

"I could bring him up on charges," Anne said as I maneuvered her past the hot-food counter and toward the coffee machine.

"Are you going to have coffee?" I asked.

"Nothing else?" I said prayerfully.

We sat down. I really didn't know why I was with her, except that it was the way the afternoon was unfolding.

"Have you ever been bothered like that before?" I asked.

"Once," she said. "A guy started following me down Broadway. He must've known I was an actress. I had a portfolio and was wearing makeup. When he got real close, he started saying dirty words, I started to limp, hoping it would turn him off. 'Keep it up, sweetheart,' he said. 'I love women with afflictions."

I laughed. She seemed so unshowbusinessy. She's probably untalented, I thought. She isn't trying to prove anything because there's nothing to prove.

"How long have you known Bea?" I asked.

"She was in love with an actor I worked with at Smithtown. How do you know her?" Anne asked.

"Oh, I was thinking of doing a comedy act, and she was very tall and I thought it would be kind of funny, the two of us."

"Are you a comedian?" she asked, as if she were talking about plumbing.

"I hate comedians," she said. "They do such awful things."

"Oh, I went out with one once. He played the Cops. He took me home and tried to attack me when I wouldn't kiss him good-night. He had terrible teeth. Then he started to cry. I felt sorry for him. He was a grown man."

I felt like an athlete flexing his muscles. "Maybe you can come and see me sometime."

I admitted I wasn't performing anyplace just then.

"Let me take your check," I said like John D. Rockefeller.

"No," she said. "I only had coffee. I'll take care of it, but I could use some silverware."

"Just grab a knife and a fork. I'll take some spoons. I live down in the Village with two roommates, and they lose silverware."

I quickly slipped a fork into my jacket pocket. I've just become her accomplice in crime, I told myself. What am I getting myself into, hanging out with New York actresses? They're all crazy, I'm a normal guy. Is this what I have to do to go to bed with someone? She's committing a crime. I wanted to escape, and yet I wanted to prove I wasn't afraid.

"Well, listen," I told her as we hit the street. "I hope we meet again sometime. Here's your fork."

"Thanks," she said, and she disappeared into the Sixth Avenue subway.

Tony Peyser Los Angeles Times Stiller's gifts as a storyteller are abundantly clear...Married to Laughter is a...reminder that behind every successful Hollywood story is a lot of rejection...and tough luck...He emerges as someone you'd love to have as a dinner guest. Jerry Stiller has earned his serenity now.

Donald Margulies Married to Laughter captures the sweet essence of Jerry Stiller -- and, in its rough-hewn eloquence, demonstrates why he has been a beloved show business fixture for forty years.

Kirkus Reviews More than a biography, this is an account of the whole gamut of emotions and experiences that populate and define a life.

Carl Reiner A wonderfully honest and humorous autobiography: The moment I finished it, I called somebody who knew Stiller's number and told him how great a book he had written. Now I tell you!