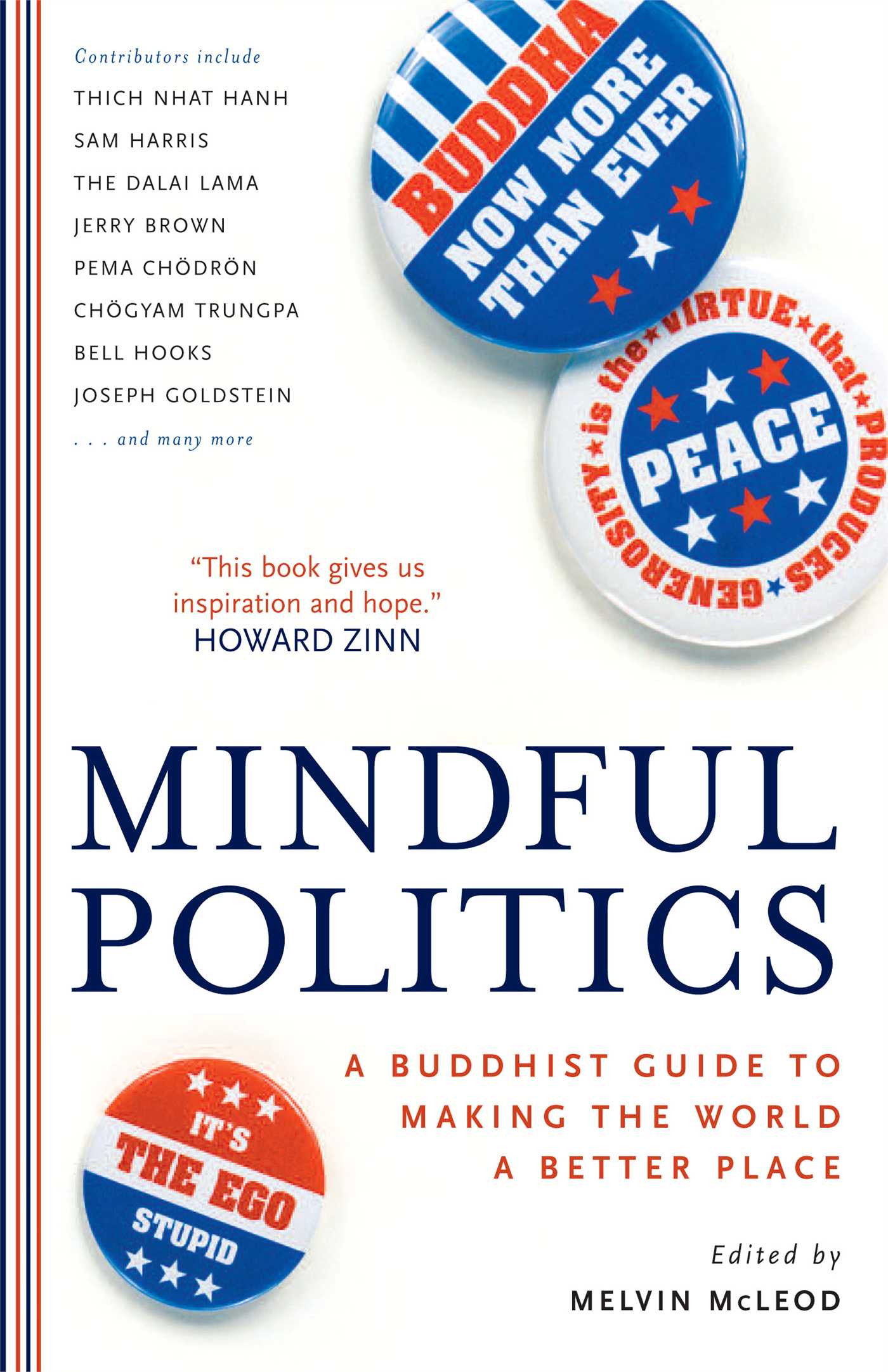 A Buddhist Guide to Making the World a Better Place

"I've studied politics my entire life. It's been because of my time working on this book that I've finally learned what's really important in politics." So says Melvin McLeod, editor of Mindful Politics, a book that transcends Right and Left, progressive and conservative, to get to the heart of what matters: how we can all make a positive difference in our complex political world.

This is not your typical political book. It's not written at a fever pitch, it doesn't use a good/bad binary, and it doesn't tout partisan policies. Instead, this timely collection addresses the less-discussed but more important questions about politics: What insight does religion have to offer politics? How can we as concerned citizens move beyond the particulars of legislation and party affiliation, and take direct action? How, amid divisive and challenging times, can personal growth and effective advocacy take place together?

In short, Mindful Politics offers the perspectives of 34 important authors and thinkers on how each of us, right now, can make the world a better place.

McLeod includes essays and insights from some of the brightest, and most controversial, lights of Buddhism - and beyond.

"An anthology like this should have been published decades ago. We all know, politics sucks. It is largely a playground for (individual and national) egos that are fixated on power and self-advantage. The present volume, compiled by the editor-in-chief of Shambhala Sun magazine, consists of twenty-nine very readable contributions that envision politics as a humanitarian enterprise focused on the betterment and upliftment of all human societies. [ . . . ] Melvin McLeod has assembled a galaxy of notables with spiritual credentials, who can shed light on how to humanize politics and--dare we hope--politicians. Delightfully, even Jerry Brown, former governor of California, makes sense. How can the Buddha's wisdom not guide us in that most human of activities called 'conflict resolution,' or politics? This anthology should be must reading for all aspiring or seasoned politicians, and it also should be placed in the hands of anyone old enough to vote."

"Shambhala Sun editor Melvin McLeod compiled a essays, interviews, discussions, and other pieces by prominent Buddhist teachers, writers, activists, and politicians. Thich Nhat Hanh, Chogyam Trungpa, Joseph Goldstein, bell hooks, and Sulak Sivaraksa are a few of the writers represented. These selections explore an aware, engaged, and mindful approach to politics. A source of inspiration, they provide a means by which we can understand conscious political action."

"The obvious failure of ordinary political thinking to create a world of peace and justice should suggest to us that we look further, deeper, for guides to action .The essays in Mindful Politics do just that, gently pushing us to think beyond orthodox solutions, drawing upon ancient wisdom to cope with the violence and insecurity of our time, giving us inspiration and hope."

– Howard Zinn, author of A People's History of the United States

"Mindful Politics lifts the political discussion out of the muck of fundamentalism and turf protection. This book is uplifting, practical, and gives hope where I thought there may no longer be any. Now if only we could sneak copies into the Oval Office."

"Mindful Politics: A Buddhist Guide to Making the World a Better Place has instantly become one of my favorite books. It is an amazing collection of thoughtful and helpful reflections. For the sake of our planet, I can I only hope it will become a bestseller."

– James Ishmael Ford, head teacher of Boundless Way Zen, and author of Zen Master WHO? and If You're Lucky, Your Heart Will Break

"Dharma and Politics. It's a marriage made in America, that great, rich melting pot of contradictions. Mindful Politics has gathered the big names--former California guv'ner Jerry Brown, Pema Chodron, Thich Nhat Hanh, even the Dalai Lama himself--around an ancient idea whose time is more relevant than ever: that the enlightened governance of a society transcends issues of gender, class, race--even partisanship. Melvin McLeod's Mindful Politics offers us a first hint of what the consummation between Buddhadharma and American politics might look like--and how to get there."

"Imagine a mindful politics! That is exactly what these thinkers, activists, and teachers are doing in this marvelous collection of essays. May these perspectives and practices inspire, inform and nurture the next generation of political leaders as well as all of us--since we are all vital living 'cells' in the body of this one world--as we ponder and hopefully contribute in ways little and big to the health of the body-politic, which is nothing less now than the health of not just the nation but the whole world."

– Jon Kabat-Zinn, author of Coming to Our Senses: Healing Ourselves and the World Through Mindfulness

"This collection of essays on a Buddhist approach to politics is far-ranging. McLeod, who edits two Buddhist periodicals and an annual anthology of Buddhist writing, skillfully organizes the diverse writings by using the categories that describe Buddhism's noble eightfold path. This anthology usefully disputes Buddhism's reputation as apolitical. Buddhism is quiet but not quietistic."

"[There is] a growing dialogue, well-represented in this anthology, [including Asian Buddhist teachers as well as] Western meditators, ecologists, and systems analysts, from Joseph Goldstein and Bernie Glassman to bell hooks and Margaret Wheatley. Perhaps their true common denomination is spiritual politics, since they also invoke Gandhi, Merton, and King. Recurring concepts like mindfulness, interbeing, and non-clinging give the book a coherent and uniquely Buddhist flavor."

"A substantive contribution on how to skillfully address the current state of [political] affairs. This book offers what has been missing from so much progressive theory and practice: ways of bringing peace right into the heart and heat of the struggle. Many pieces stand out, including Charles Johnson's brilliant essay, 'Be Peace Embodied,' and Thich Nhat Hanh's kick-ass exhortation to the US Congress of how to better govern the most powerful country in the world. I recommend reading and re-reading it. I'm glad to have such a feast to learn from. The world needs it."

A Buddhist Guide to Making the World a Better Place