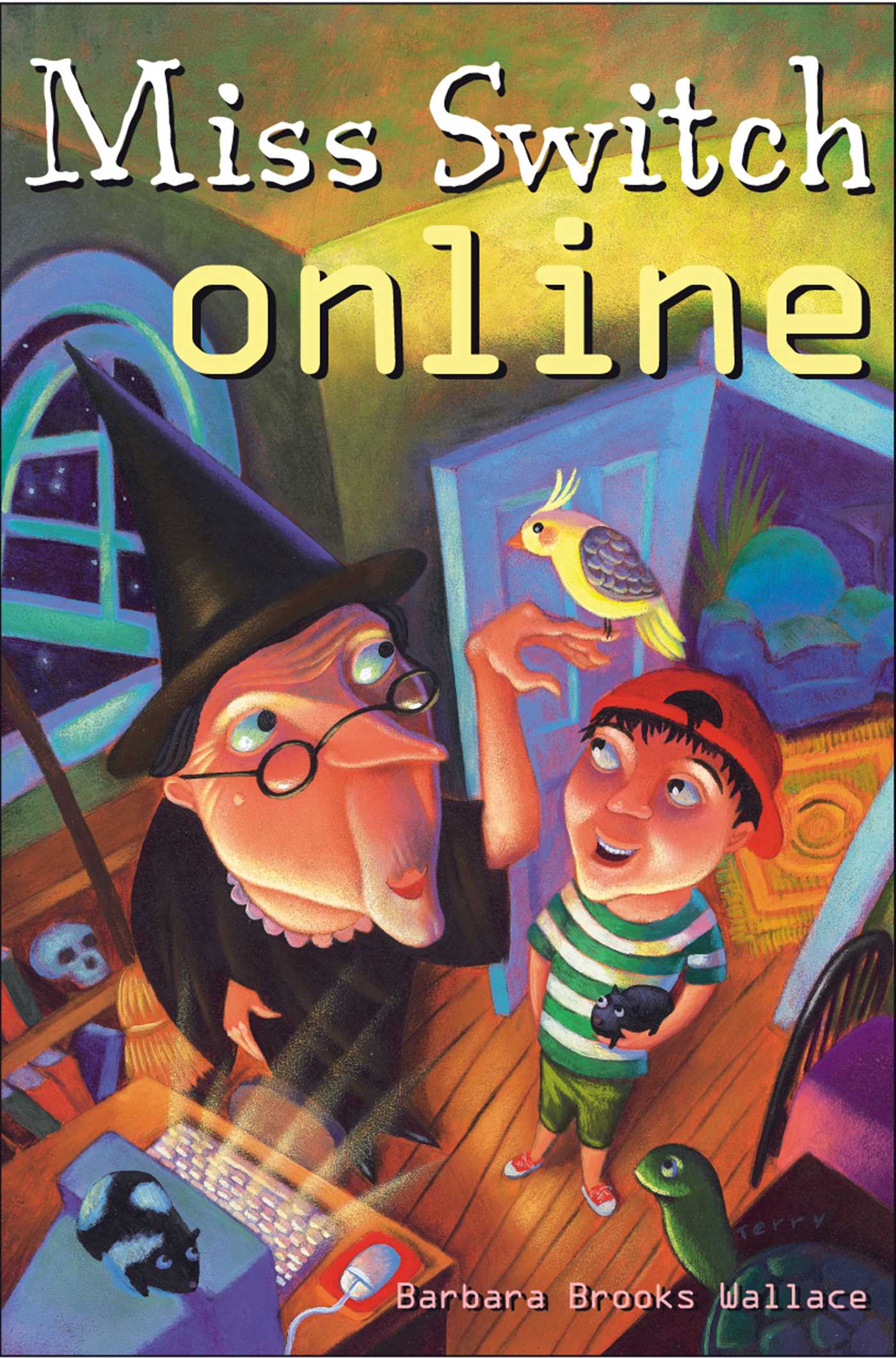 If you think nothing much is going on when Rupert P. Brown III begins sixth grade at Pepperdine Elementary School, you'd be dead wrong. Consider the following: a new teacher with the unlikely name of Miss Blossom; a new principal who has all the girls swooning; a talking bird who thinks he's a math whiz; a computer that goes berserk and produces a Web site called computowitch.com that not only displays some very ominous poetry, but whose password is the name of a witch Rupert has tangled with in the past. Yes, a witch!

Faster than you can say "witchcraft and wizardry," Rupert figures he could be in big trouble. He can really use the help of Miss Switch, a real, honest-to-goodness witch herself, who also, amazingly, was once a former popular teacher of Rupert's class at Pepperdine. He has reason to believe she's back, but where?

Nothing appeared to happen on the day I began sixth grade at Pepperdine Elementary School that pointed to the extraordinary, and I have to add dangerous, events about to take place in my life. It's as amazing that I'm still here to record them as it was for me to be around to record two similar events that happened earlier. Some of you may choose not to believe what I'm writing on these pages. But as a great and dedicated scientist, which I became in the summer following my year in the fourth grade, I feel I must make this report. I'll be as accurate and truthful as I know how.

The only noticeably different thing about the beginning of this first day of school from every other was the new sixth-grade cool-guy greetings my friends and I exchanged as I sauntered up to where they all sat hunched over on top of the monkey bars of the Pepperdine playground.

The Broomster -- that was me, Rupert P. Brown III, also known as Broomstick.

Peatmeister, of course, was Peatmouse, otherwise Wayne Partlow. Creamer was Creampuff, otherwise Tommy Conrad. Bananapeeler was plain Banana, otherwise Harvey Robert Fanna. Now, once we'd gotten all this cool-guy stuff over with, we'd go back to being good old Peatmouse, Creampuff, Banana, and Broomstick, which we'd called each other since about the third grade. I was just as long and skinny then as I am now, which is how I got my name.

But who could have known back there in the third

grade how prophetic that nickname would turn out to be!

"Where's the Spookster?" Peatmouse asked as soon as I'd settled myself down beside them all on the top rung.

"She left," I replied. "Her father got transferred. She's about a thousand miles away from here now."

Spookster was Spook, otherwise Amelia Matilda Daley. I'm the one who gave her the name Spook

in the fifth grade because of the way she always breathed, "Boy, that's spooky!" when she looked into a microscope. As you may gather, Spook is a fellow scientist as well as a friend. She is the only one who knows the true details of the two earlier events I've mentioned. In order for you to have a better understanding of the report I'm about to make, I'll reveal the most important of those details here.

In the first of the two events, I was introduced to a real, honest-to-goodness, card-carrying witch, Miss Switch. She arrived at Pepperdine Elementary School as our fifth-grade teacher, seeking the help of my great scientific brain to suggest some original witchcraft ideas that would satisfy the command of a goofy contraption called a computowitch. It belonged to a really nasty brand of witch named Saturna. Luckily, I came up with the idea of feeding it the information about what a great teacher Miss Switch was. The computowitch got so excited it practically blew itself up, and thus we got rid of Saturna. Or so I thought.

But back she came, now determined to get rid of the one who had put her computowitch out of commission. That, of course, was me. Saturna tried to have me kidnapped, but it was Amelia who got kidnapped instead. Fortunately, Miss Switch came to the rescue. After some pretty scary events, all ended up well, and once again we got rid of Saturna. Or so I thought!

At any rate, I now return to the conversation I was having with my friends on the top rung of the Pepperdine monkey bars. After the greetings were over with, the first topic of conversation, as it always had been, was noteworthy events of that summer. My contribution was that I got another pet, a cockatiel, named Fred. I said "another" because he was in addition to my turtle, Caruso, and my two guinea pigs, Hector and Guinevere. Fred was a consolation prize from my parents because I didn't get to go to camp that summer. They had finally decided that camp was a waste of my time and their money, which I'd been telling them all along. But if they wanted to console me with Fred, I was not going to argue.

After all this we were ready for the burning question of who our teacher was going to be that year.

"She's okay," Creampuff said. "We liked her most of the time."

"You know what the real problem is, don't you?" I said. "It's not Mrs. Fitzgerald. It's just that once you've had the best, nothing else is ever going to seem that good."

It took them all zero seconds to know exactly the person I was talking about.

"And the thing is," said Peatmouse, "that we could never really explain why we were so nutty about her."

"The whole class was," said Creampuff. "But looking at her, you'd think we were all just plain nutty."

I couldn't argue with that one. I now refer you to some notes I made once regarding her looks:

a. Sharp nose that could crack granite.

b. Ridiculous little old-fashioned wire spectacles (resting on said nose) that instantly stop looking ridiculous when her eyes are drilling holes into some poor fifth-grade victim.

c. Chin that could substitute for a pickax.

d. Black hair rolled into a bun that looks as if it could not be dislodged with a sledgehammer.

e. Ancient, musty gray dress that could have been rescued from somebody's old attic trunk.

f. General appearance as cuddly as a steel knitting needle.

"Then why did we like her so much?" asked Peatmouse. "I mean besides her being the best teacher we've ever had?"

We all looked at one another and said it at the same time: "Because she was so fair!"

And that was probably the biggest reason. She wasn't just the best teacher, but the fairest we'd ever had. When she had something unpleasant to say to you regarding your behavior in class, or your latest rotten English or arithmetic paper, and you watched her nose growing sharper, and felt her eyes turning your blood to ice, and you wondered if your life was about to end right there and then as her pickax chin chopped you to pieces, you always knew one thing: that you'd earned it!
ard

"On a 'fair' scale of one to ten, you'd have to pick a number so long, it fell off the blackboard," said Banana.

"Off the world," said Creampuff.

"Out of the universe," said Peatmouse.

"Does anyone think she might be back?" Banana asked.

"Why not, Broomstick?" asked Creampuff.

Anyway, how could I tell them exactly "why not"? Spook was the only one I could discuss that with. After all, as I said, she was the only one who knew who Miss Switch really was, and that she would probably be back here only if trouble were brewing.

As far as I could see, there was nothing in sight by way of trouble that could possibly need Miss Switch's special talents. Therefore, we could not expect her to appear in the sixth-grade classroom.

But then how was I to know my opinion was wrong? Dead wrong. For that very night when I sat down at my computer to e-mail Spook at spook@home.com, something sinister was already developing that was aimed right at me, Rupert P. Brown III. And not only at me, but also at Peatmouse, Banana, Creampuff, and the whole Pepperdine Elementary School sixth grade!

Barbara Brooks Wallace has written Victorian mysteries that include a parlor, a tavern, a castle, a scullery, and a gallery. But she claims never to have lived in a tavern or a castle, or owned a house with a parlor, a scullery, or a gallery. So far she has not lived in a tenement, either. She simply dwells in a nice little house in Alexandria, Virginia, with her very nice husband; affectionate Burmese cat, Cleo; and turtle, Peter. Her son, Jimmy, daughter-in-law, Christina, and Victoria and Elizabeth, their two daughters, live nearby.