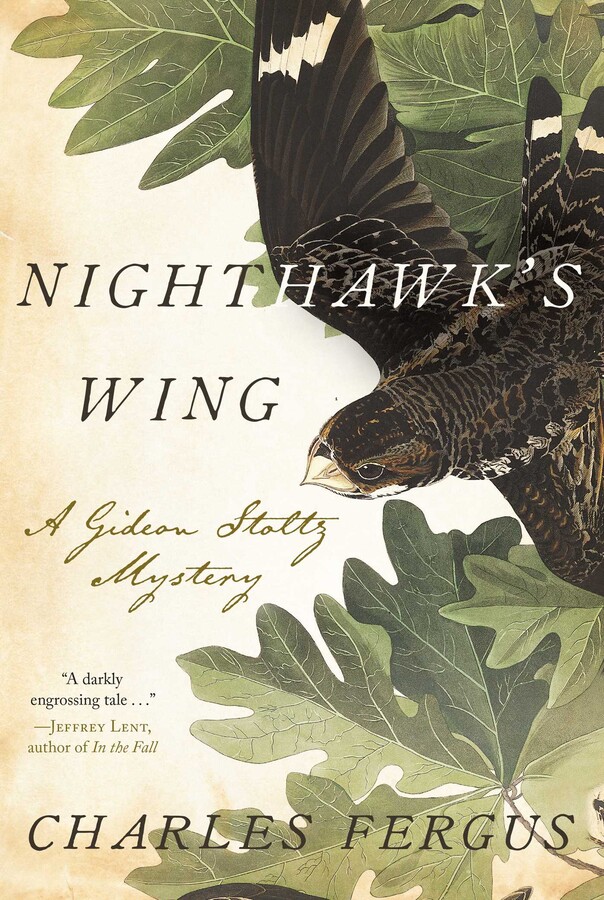 ** "Set in 1836, Fergus’s superior sequel . . . brings the period to life as he expertly melds setting and plot."  Starred Publishers Weekly **

In this thrilling second in the Gideon Stoltz Mystery series that Booklist called “An appealing debut that deserves a boost from enthusiastic hand-sellers,” it’s now 1836 in the fast-growing town of Adamant. The young Pennsylvania Dutch sheriff Gideon has a new case when a beautiful woman—suspected of witchcraft and residing in a nearby German settlement—is murdered. Suffering from a head injury after a fall off his horse, Gideon can’t recall anything that happened at the time of the woman’s death. As flashes of memory return, he realizes that not only did he know the victim, he was with her the night she died. As Gideon delves into the investigation, he must include himself in the list of suspects.

When Gideon uncovers another dead body, he’s launched on a path to discover the truth, no matter the outcome. Gideon’s estranged wife, True, has her own reluctant methods of investigation. Gifted with unwelcome powers of second sight, True realizes that her husband’s life is in danger—and puts her own life on the line to save him.

Nighthawk’s Wing unflinchingly examines the  oppressed status of women in the 1830 and like the first in the series, it has “an atmospheric setting and a strong sense of place” (Library Journal). Nighthawk’s Wing  beckons all readers who crave authenticity in early American historical novels, including those intrigued by witchcraft, spells, and visions. This compelling mystery glides along the edge between the gritty reality of the early 1800s and —a parallel world of spirits and haunted souls.

Charles Fergus is the author of seventeen books. The book review editor for Shooting Sportsman magazine, he has written for publications as various as Pennsylvania Game News,Audubon , Country Journal , Gray’s Sporting Journal , Yale Review , and the New York Times . A Stranger Here Below, his first mystery, is influenced by the personal tragedy of his own mother's murder. Fergus lives in Vermont's Northeast Kingdom with his wife, the writer Nancy Marie Brown, and four Icelandic horses.

In Praise of Nighthawk's Wing:

"Nighthawk’s Wing is the second in author Fergus’s mystery series set in the 1800s in Pennsylvania Dutch country. It is an accomplished crime novel, unraveling truths as Gideon questions witnesses about the last days of Rebecca’s life and eliminating falsehoods as he pieces together evidence and observations. It keenly reflects on attitudes and grievances held by members of different religions, cultures, and native languages and suspicions of women unwilling to be confined by their expected roles. It also warmly details time and place and finely depicts tensions between a husband and wife in grief. The narrative stokes Gideon’s restless guilt and captures Rebecca’s tumult in the form of an imaginary nighthawk companion. More than a down-to-earth procedural, Nighthawk’s Wing takes flight."– Historical Novels Review

“What a fantastic book! Strong, well-drawn characters, rich attention to natural detail, and a haunting narrative make this a series to get excited about.” – Paul Doiron, author of the Mike Bowditch Mystery Series

“This beautifully written mystery combines harsh realities with moments of sheer wonder. A murder mystery that has at its heart a praise hymn to America’s rural past.” – Patricia Bracewell, author of the Emma of Normandy trilogy

“Spellbinding historical fiction. Fergus is a wonderful writer who will entrance you with his sense of time and place.” – Kate Flora, author of Death Comes Knocking

“An intricate mystery alive with well-paced narrative and brutal realism.” – Castle Freeman, Jr., author of The Devil in the Valley

“I absolutely loved Nighthawk’s Wing – I read it straight through in one day, and it’s haunted me ever since.” – Kristen Lindquist, Tourists in the Known World

“High-tension, high-stakes law enforcement and crime solving in a fascinating culture of immigration, frontier, and survival in early America.” – Beth Kanell, author of The Long Shadow

“An atmospheric page-turner . . . I was borne away by Nighthawk's Wing, and you will be too.” – Edith Maxwell, author of the Agatha Award-winning Quaker Midwife Mysteries

“A darkly engrossing tale in which a young sheriff struggles to understand and unravel not only the workings of the complex and dangerous souls he encounters, but his own tortured soul as well.” – Jeffrey Lent, author of In the Fall

“A fresh and original take on the historical mystery, Nighthawk's Wing fills the stage with characters whose concerns will resonate uncannily with those of twenty-first century readers.” – Tim Weed, author of A Field Guide to Murder and Fly Fishing

“Fergus’s measured pace, rich with the feel of the raw, unsettled landscape and its fragile human bonds, provides a depth to the double mystery: the crime, and how to reinvent a marriage after a child's death. Not until the very end of the book will the answers become clear—and the pain and loss along the way are vivid and visceral. In the tradition of Jeffrey Lent’s In the Fall, Erik Larson’s The Devil in the White City, and even Nathaniel Hawthorne’s early American novels, NIGHTHAWK’S WING melds human frailty and strength into the very texture of the place and time, creating a mystery that will call for multiple readings that savor its layers and revelations.”—Kingdom Books review

In Praise of A Stranger Here Below:

“Some writers are natural story tellers and have an instinct for the reader’s interest. Others have the ability to invoke mood or a sense of place. Still others are able to handle landscape or have the ability to invoke precise imagery. Every now and then you will find a writer who has all of these qualities, and because of that they invoke the magic of fiction. They make the chair you are sitting on disappear.  Charles Fergus is one of those writers, and A Stranger Here Below is one of those books.  – Craig Nova, author of All the Good Yale Men and The Good Son“The kind of mystery Lee Child would have Jack Reacher tackleif he placed a story in the 1830s.” – Michael McMenamin, author of The Liebold Protocol “Deeply imagined and intricately plotted, A Stranger Here Below marries richly textured historical fiction with the urgency of a mystery novel. Fergus knows certain things, deep in the bone: horses, hunting, the folkways of rural places, and he weaves this wisdom into a stirring tale.” – Geraldine Brooks, author of March and People of the Book

“Imbued with Michael Connelly’s gumshoe skills and the vivid historical descriptions of Charles Frazier, A Stranger Here Below is a stark procedural set in the backwoods of Pennsylvania circa 1830. Charles Fergus displays a deft touch in detailing the rough and tumble life of everyday 19th-century America.” – Brad Smith, author of The Return of Kid Cooper and the Virgil Cain mysteries

“With luminous and deftly sketched prose, Charles Fergus takes us into an American past that is both deeply familiar and utterly strange, through the eyes and thoughts of a young man who is a stranger to his newly chosen community. Sheriff Gideon Stoltz patiently unravels a series of crimes and secrets, while also examining his own life, his past, and the beauties and tragedies of life itself.” – Jeffrey Lent, author of Before We Sleep and In the Fall

“A dark, engrossing tale that introduces a decent, sympathetic hero in the young sheriff Gideon Stoltz. The novel’s special strength, however, is its imaginative saturation in the community of Adamant, a violent, haunted place of dreams and visions, a place as hard and unforgiving as its name.” – Castle Freeman, Jr., author of The Devil in the Valley

“In Gideon Stoltz, Charles Fergus has created a unique 19th-century Eastern lawman who struggles not only with wrongdoers but with his own griefs and travails. A Stranger Here Below kept me reading late into the night.” – Dan O’Brien, author of The Indian Agent and Stolen Horses

“Fergus puts you firmly in Gideon Stoltz’s rough-hewn world where a ‘foreigner’ with the wrong accent has to watch his back even if he wears a sheriff’s badge. A cracking good mystery, and a window to the time when our young country was still a dark and treacherous place.” – Scott Weidensaul, author of The First Frontier

“Charles Fergus’s gifts for invoking time and place empower him to tell an irresistible tale of extraordinary people and the past that haunts them.” – Paul Schullery, author of The Time Traveler’s Tale and Diamond Jubilee
"[A] rich novel of a distant time and a man who is “Othered” in most aspects of his life . . . Although the book is clearly crime fiction, it is equally an exploration of the soul in the presence of death and wrongdoing. Which is, after all, what a “stranger here below” can expect." -- The New York Journal of Books

"A writer of nonfiction about the natural world, Fergus brings his appreciation for nature to this well-paced blend of mystery and western. Gideon is a classic lawman, tough when he has to be but able to weep when an influenza epidemic rips through town, leaving empty cradles in its wake. An appealing debut that deserves a boost from enthusiastic hand-sellers."--Booklist

“Simply put, I loved this novel. It works as a compelling and complex historical mystery, but it’s more. The characters struggle mightily with the evil around them, trying to find purpose in a world that is frequently brutal and unforgiving. But they carry on. They find meaning in their connections to others, in song, in following dogs into thickets. Their lives are perpetually caught between beauty and violence, compassion and cruelty, love and hate. . . . The details, whether of a grouse’s feathers or a horse’s gait or burning charcoal for an iron mill, are flawless. Fergus has a curious naturalist’s attention to detail. This is a gem. I hope we see more of Gideon Stoltz in the future.” —Matthew Miller, Nature.com, The Nature Conservancy blog

"If you've grown tired of formulaic mysteries and thrillers, then you're in for a treat with A Stranger Here Below . . . The characters are built not from cliches, but through Fergus's deft descriptions of their thoughts, desires, and secrets, all while creating a tone that keeps the reader entranced . . . A pleasure to read. -- Elaine Meder-Wilgus, WPSU's BookMark