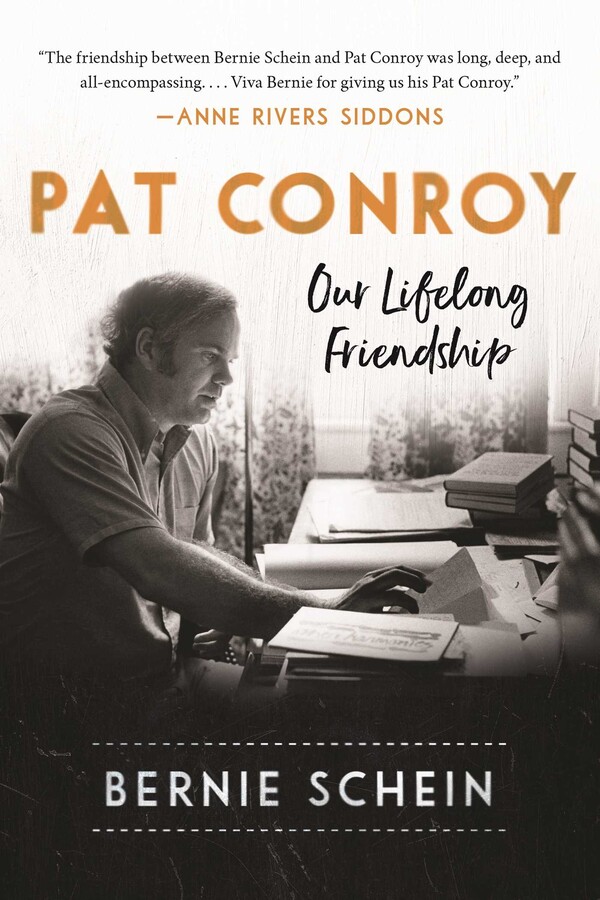 “Bernie Schein is the funniest man alive, or so he has dogmatically maintained during the burdensome decades I have known him. . . . [He is] by turns hysterically funny, wildly neurotic, uniquely sensitive, and heartbreakingly honest.”—Pat Conroy

Pat Conroy, the bestselling author of The Prince of Tides and The Great Santini among many other books, was beloved by millions of readers. Bernie Schein was his best friend from the time they met in a high-school pickup basketball game in Beaufort, South Carolina, until Conroy’s death in 2016.

Both were popular but also outsiders as a Jew and a Catholic military brat in the small-town Bible-Belt South, and they bonded. Wiseass and smart aleck, loudmouths both, they shared an ebullient sense of humor and romanticism, were mesmerized by the highbrow and reveled in the low, and would sacrifice entire evenings and afternoons to endless conversation. As young teachers in the Beaufort area and later in Atlanta, they were activists in the civil rights struggle and against institutional racism and bigotry. Bernie knew intimately the private family story of the Conroys and his friend’s difficult relationship with his Marine Corps colonel father that Pat would draw on repeatedly in his fiction.

A love letter and homage, and a way to share the Pat he knew, this book collects Bernie’s cherished memories about the gregarious, welcoming, larger-than-life man who remained his best friend, even during the years they didn’t speak. It offers a trove of insights and anecdotes that will be treasured by Pat Conroy’s many devoted fans.

Bernie Schein was born, bred, and Bar Mitzvahed in Beaufort, South Carolina. He was an educator for forty-five years, for many of them in Atlanta. He is the author of three books, including If Holden Caulfield Were in My Classroom and the novel Famous All Over Town. He has been published and featured in numerous newspapers and magazines, including Newsweek, the Jewish Advocate, Atlanta magazine, and the Atlanta Journal-Constitution, and interviewed on NPR and radio stations across the country. He is now an educational consultant as well as a humorist and raconteur. He and his wife live in Beaufort, South Carolina.

“Honest in its portrayal of both Conroy and Schein's own conflicted feelings toward the novelist, the lucid narrative deftly explores the complexities of a lifelong friendship. A thoughtful, poignant, and candid memoir perfect for Conroy fans.”—Kirkus Reviews

"An inside look at a person who became famous. Painfully famous. . . . Schein dissects their relationship like a therapist. But to me, it’s a look at something rarer than fame: a close friendship."—Charlotte Observer

“Lord have mercy, it’s a doozy. . . . Pat Conroy:Our Lifelong Friendship is the surprising tale of a relationship forged in paradox. A tale of two men as radically different as they were simpatico who perfectly complemented each other, though often via insult. It’s a tale of two people who had each other’s back even while stabbing each other in the back, who loved each other madly even when they hated each other’s guts. It’s the story of two friends who were really more like brothers – brothers who almost teetered into Cain and Abel territory, but ultimately found their way back to Eden. Yes, it’s a story of biblical proportions. . . . Think I’m exaggerating? Well, that was Pat and Bernie for you.”—Margaret Evans, Lowcountry Weekly

“The friendship between Bernie Schein and Pat Conroy was long, deep, and all-encompassing. Bernie tells of it with fierce love, great particularity, and often the outrageous wit that makes him Bernie and no one else. Viva Bernie Schein for giving us his Pat Conroy." —Anne Rivers Siddons

"No one is more uniquely qualified to write about his friendship with my late husband, Pat Conroy, than his oldest and closest friend, Bernie Schein. Because they shared the same irreverent humor, biting intellect, and big-hearted personalities, their bond was powerful enough to survive the many turmoils and betrayals that came their way. Bernie’s portrayal of his decades-long relationship with Pat is intimate, honest, heartbreaking, and highly readable. This book is an ode to a rare, complex, and loving friendship." —Cassandra King Conroy, author of Tell Me a Story: My Life with Pat Conroy and The Sunday Wife

"A remarkably intimate look into the soul, adventures, and misadventures of the great writer Pat Conroy, written by his longtime best friend, Bernie Schein. The eulogy and post mortem conversation with the son of the Great Santini toward the close are as touching as the book is riotously funny. Pat and Bernie were teachers, writers, and civil rights pioneers. . . . A very moving, fifty-year-long story of friendship and love. "—Joseph L. Galloway, war correspondent and co-author of We Were Soldiers Once and Young and We Are Soldiers Still

“Troubled family relationships were perfectly captured and explored by Pat Conroy in book after book. All wonderful. What was not known was the depth of resolve and dependence Conroy had with his closest friend, Bernie Schein. Fractious? At times, certainly. Loving? Definitely. Intimate? Yes, and for that very reason far from easy. Here, then, is the real story of that friendship.” —Maria Riva, bestselling author of Marlene Dietrich; The Life

"No one on earth has the experience, the humor, and the heart to write about friendship with Pat Conroy with more authority than his best friend (and occasional enemy) Bernie Schein. Anyone who knew Pat heard so many Bernie stories that they wondered if he was an actual person or a figment of the ever-fertile Conroy imagination. As it turns out, he was both. Their childhood friendship, which began in a small Southern town in the Cold War, spanned wars, marriages, fame, and infamy and  too many books to name. You can't really say you're a Pat Conroy reader if you haven't read the story from Bernie's profane and profound, and deeply loving perspective." —Janis Owens, author of American Ghost

“Bernie Schein's Pat Conroy is full of the quirky characters and stirring stories you might expect from the life of Pat Conroy. The most important, surprising, and touching story of all, though, comes from Schein's intimate portrait of what a deeply loving friendship between two men, with all its adventure, humor, heartbreak, and reconciliation looks like. That's a story all too rare and untold in the modern world, and well worth reading.”—Kerry Egan, author of On Living

"An inside look at a person who became famous. Painfully famous. But to me, it’s a look at something rarer than fame: a close friendship."—Island Packet

“Bernie Schein is the funniest man alive, or so he has dogmatically maintained during the burdensome decades I have known him. . . . [He is] by turns hysterically funny, wildly neurotic, uniquely sensitive, and heartbreakingly honest.”—Pat Conroy