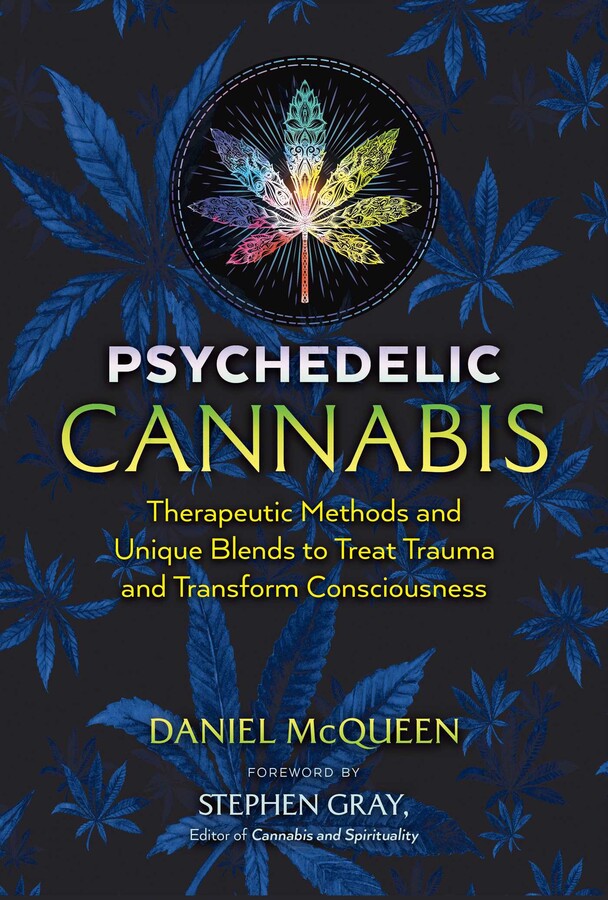 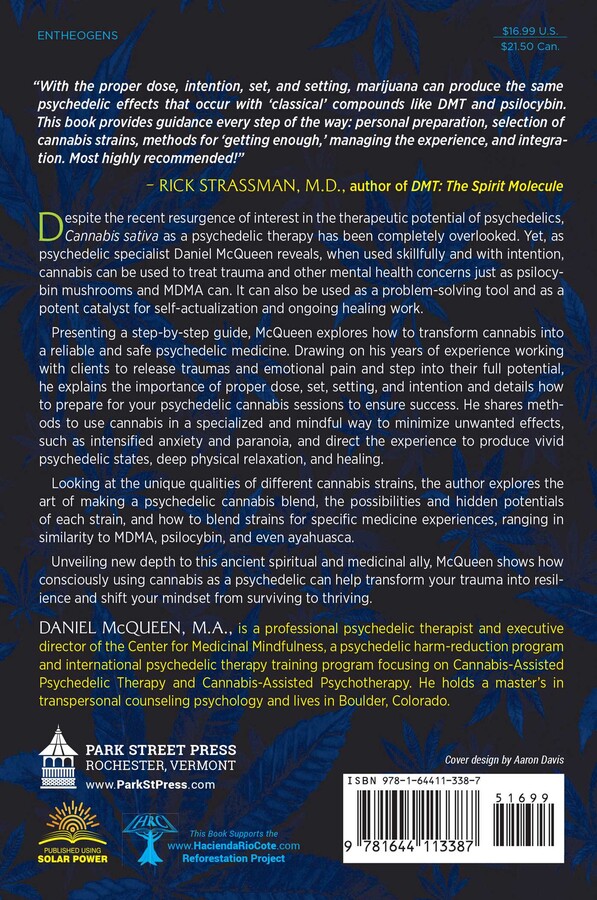 • Explains how cannabis can be used to treat trauma and emotional pain, as a profound problem-solving tool, and as a potent catalyst for self-transformation and ongoing healing work

• Shares methods to minimize the unwanted effects, such as intensified anxiety and paranoia, and direct the experience to produce deep physical relaxation and, when needed, elevated healing states

Despite the recent resurgence of interest in the therapeutic potential of psychedelics, Cannabis sativa as a psychedelic therapy has been completely overlooked. Yet, as psychedelic specialist Daniel McQueen reveals, when used skillfully and with intention, cannabis can be used to treat trauma and other mental health concerns just as psilocybin mushrooms and MDMA can. It can also be used as a problem-solving tool and as a potent catalyst for self-actualization and ongoing healing work.

Presenting a step-by-step guide, McQueen explores how to transform cannabis into a reliable and safe psychedelic medicine. Drawing on his years of experience working with clients to release traumas and emotional pain and step into their full potential, he explains the importance of proper dose, set, setting, and intention and details how to prepare for your psychedelic cannabis sessions to ensure success. He shares methods to use cannabis in a specialized and mindful way to minimize unwanted effects, such as intensified anxiety and paranoia, and direct the experience to produce vivid psychedelic states, deep physical relaxation, and healing.

Looking at the unique qualities of di erent cannabis strains, the author explores the art of making a psychedelic cannabis blend, the possibilities and hidden potentials of each strain, and how to blend strains for specific medicine experiences, ranging in similarity to MDMA, psilocybin, and even ayahuasca.

Unveiling new depth to this ancient spiritual and medicinal ally, McQueen shows how consciously using cannabis as a psychedelic can help transform your trauma into resilience and shift your mindset from surviving to thriving.

From Chapter 1. Characteristics of Psychedelic Cannabis

This book isn’t a primer on cannabis. Those have been written. You don’t need to know the details to use it as a psychedelic medicine. But I do want to share some context for those who might not have used it in a while. If you’re doubting whether it’s possible for cannabis to create a psychedelic experience, consider when you last smoked it--a year, a decade, or a generation ago?

Simply stated, according to recent studies, the tetrahydrocannabinol (THC) in cannabis is three times stronger than it was twenty years ago. In addition, the percentage of the cannabinoid cannabidiol (CBD), also found in the plant as a natural antidote to THC, is decreasing in most strains through selective breeding. This means the subjective effects of the THC are felt even more strongly. We are literally witnessing firsthand the evolution of an entire species by human engineering and genetic manipulation.

The new scientific exploration of the relationship between cannabinoids and terpenes, called the entourage effect, has amplified the diverse qualities of cannabis through breeding subtle changes in chemical composition. Because of this new understanding, it’s very safe to say cannabis today is nothing like it was two decades ago, let alone during the psychedelic 1960s. I am sure there were some incredible exceptions to this trend, as there have always been wonderful growers of this amazing plant, but on average, exceptional cannabis wasn’t the experience of the vast majority of users. Maybe it’s time to reconsider this humble and unusual smelling flower. Those smells are the terpenes, and they’re like little engines of transformation.

Despite the strength of modern strains, cannabis is still honored in the healing community for its therapeutic nature. Because psychedelic cannabis sessions are shorter and recovery time is minimal, integration is easier than it is for other psychedelic medicines, which makes it ideal for those who have busy careers and family responsibilities. Psychedelic cannabis is also much safer for older people to use because it not only causes less stress on the body but is actually neuroregenerative in nature. Imbibing cannabis with intention is a natural harm-reduction tool, as well, with regular users reporting that when they transitioned to intentional use and actually began to turn toward what needed healing, their overall cannabis consumption and other drug use decreased significantly and without much effort or clinical intervention. As an addiction treatment, cannabis is a much safer alternative to addictive drugs in the initial stages of treatment, and cannabis protocols and breathwork techniques can be used as tools to heal the underlying causes of addictive behavior. Except for a few easy-to-assess contraindications, there are few reasons not to promote this medicine for personal healing.

Cannabis is much safer, psychologically and physically speaking, than any other psychedelic medicine, and it has a shorter duration than most psychedelics, making it easier to integrate and recover from the experience. It can be used effectively in smaller doses, or as a way to step into working with other psychedelics. This is something we call testing the waters. If you have never tried a psychedelic, maybe there are a few steps to take before going to Peru for a legal ayahuasca experience.

Unlike other psychedelics and MDMA, which require significant time between sessions for integration and physical wellbeing, cannabis can be used safely and on an ongoing basis for healing purposes, even weekly within the appropriate context. This book describes what that container could look like for a solo practitioner. In addition to safe ongoing use, as people become more skillful, they can gather together for community events. We regularly host more than twenty-five people in our circles. I’m not saying start with that, but community really is part of the medicine.

Subjectively, when used skillfully, psychedelic cannabis experiences are not that different from MDMA-assisted psychotherapy. The healing effects are sometimes indistinguishable from that of MDMA and other psychedelics, including the intensity of somatic release and physical shaking, emotional intensity, and even traumatic memory recall in a safe and accepting state of being. From my experience, psychedelic cannabis experiences often begin like MDMA sessions, then morph into something akin to a psilocybin mushroom experience with significant body sensations and vivid inner visuals. A very significant number of clients also state they experience ayahuasca-level and DMT-level trips, especially if we add certain simple breathwork practices to the experiences.

Cannabis sativa is a safe and sacred medicinal tool which supports us in turning inward, resolving tensions stored deep within the body, tracking inner sensations, and releasing traumas from the nervous system. Using cannabis intentionally is completely different than getting high and escaping your problems.

The psychedelic cannabis experience is a synergistic fusion of a full-spectrum Cannabis sativa blend with set, setting, and skill (primarily music, somatic awareness, and breath), within a multi-paradigm, facilitated process that mimics a fusion of MDMA and psilocybin, and often reaches ayahuasca/DMT-level states, particularly when combined with gentle breathwork practices.

The psychedelic cannabis experience does not require extremely high doses but is exponentially stronger than an experience typically associated with cannabis alone. Experiences with psychedelic cannabis, however, generally exhibit far more personal agency than other strong psychedelic medicines. The peak of the experience can be modified at different intensities based on dosage, and to last 1.5 to 3 or more hours.

Cannabis is legal in most of the United States and is the safest psychedelic medicine available. It can be safely used frequently for ongoing psychedelic therapy and psychedelic exploration purposes and may be as effective as other psychedelic medicines for treating significant clinical disorders if placed in an appropriate protocol.

Some General Effects of Psychedelic Cannabis

• Increased awareness of the physical body, often creating a form of synesthesia that combines our visual perception with proprioception, called “Visual Proprioception” in the Medicinal Mindfulness model

• Deep muscle relaxation leading to energetic discharges and trauma resolution, including the activation and clearing of the meridian and chakra channels, facilitating energy movement throughout the body, and profound new levels of nervous system regulation

• Capacity to travel through memory; increased awareness of mental habits, judgments, and anxieties leading to resolutions of unhealthy processes

• Deeper awareness of emotional processes and activation of emotional discharges, leading to release and healing

• Active, dream-like, inner visual experiences and a clear capacity to imagine in a hyper-vivid inner reality

• Transpersonal phenomena such as visitations from entities or aspects of self that feel apart from the self (ancestors, guides, angels, totems, etc.), and deep spiritual states of being and non-being that more closely resemble unity consciousness and profound connections with the divine

• Development of a sense of agency in life, feeling more in control of life situations and having more choice, and feeling a deeper connection with the world and a greater sense of purpose

While we’re on the topic of understanding what psychedelic cannabis is, I’d like to discuss why I’ve chosen to call it such. After exploring terms like “transcannabis,” denoting something that “transcends but includes cannabis,” and “conscious cannabis,” which primarily denotes intentional use of cannabis as a mindfulness tool, I’ve currently landed on the simple and direct “psychedelic cannabis” to describe the medicine and the experience as something different from recreational consumption, otherwise known as “smoking pot
Daniel McQueen

“Is a highly reliable botanical psychedelic legally available throughout most of the US? The answer is a resounding ‘yes,’ and the details of that answer reside in this book. As with many discoveries in this field, it began with McQueen’s serendipitous discovery of how, with the proper dose, intention, set, and setting, marijuana can produce the same psychedelic effects that occur with ‘classical’ compounds like DMT and psilocybin. This book provides guidance every step of the way: personal preparation, selection of cannabis strains, methods for ‘getting enough,’ managing the experience, and integration. Most highly recommended!”

“Daniel McQueen, the founder of the Center for Medicinal Mindfulness, is a pioneer in the therapeutic uses of cannabis as a psychedelic. Although we don’t usually think of the cannabis plant as a transformational psychedelic, Daniel shares information that shows it to be just as profound and therapeutically effective as ‘classical’ psychedelics, such as psilocybin. Readers will find much wisdom and good information in this book.”

– Dennis McKenna, Ph.D., ethnopharmacologist and coauthor of The Invisible Landscape