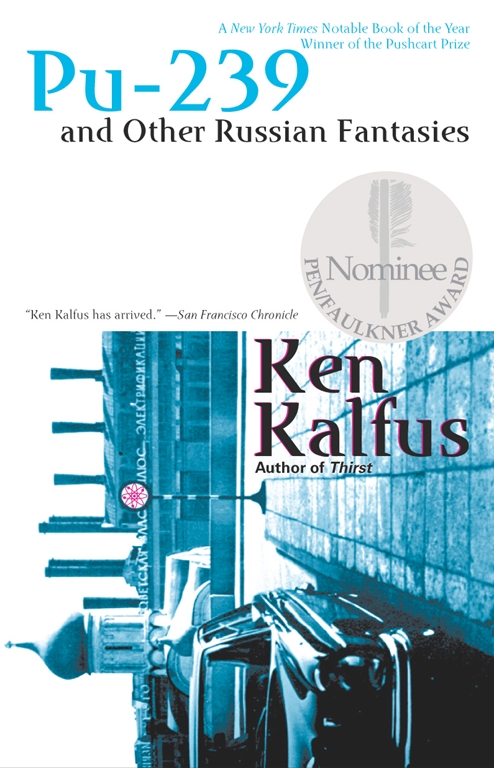 Pu-239 And Other Russian Fantasies

With the publication of his first story collection, Thirst -- also a New York Times Notable Book of the Year -- Ken Kalfus made "a dazzling debut," emerging as "a major literary talent" (Salon.com). Now, in this eagerly anticipated follow-up -- drawn from his four years living in Moscow and traveling the breadth of the Russian landscape -- Kalfus creates unforgettable etchings of individual lives throughout a century of turbulent history, in tales that range from hair-raising to comic to fabulous. Imaginative, densely detailed, and consistently rewarding, PU-239 And Other Russian Fantasies is a brilliant showcase for "one of the most interesting writers working today" (The San Diego Union-Tribune).

San Francisco Chronicle PU-239 and Other Russian Fantasies is so full of pleasure and wonder from sentence to sentence and page to page that it touches the reader physically, as Borges once put it, "like the closeness of the sea or of the morning"....The stories have a cumulative power, achieving an epic vision of a country and its past as well as an intimate portrait of individual lives....Extraordinary.

The New York Times Book Review "Birobidzhan" is a masterpiece: wrenching, tender, harrowing, and suffused with the sad comedy of an idealistic intensity it refuses to mock....Kalfus is a virtuoso of the dismal comedy of Soviet life.

Salon.com Kalfus conveys a sense of Soviet and post-Soviet life in the stories here -- you'd think he"d lived there for decades. Kalfus is that rare writer of fiction whose passages of description feel like action; it's as if he were injecting his readers with a serum that renders them, in a rush, intimately familiar with the texture of Russian experience.

The Philadelphia Enquirer Kalfus brilliantly depicts sympathetic characters living in a world governed by symbolism and dogma....The result, in the substance and style of this fine collection, is stories that not only entertain, but provoke reflection.

Booklist Kalfus prove[s] himself to be one of those rare writers who manages to tackle lofty issues of transnational culture and capitalism with a gentle humanist touch, making his stories at once intellectually provocative and emotionally satisfying.

Kirkus Reviews (starred review) Imaginative, densely detailed stories that open a window on a world perhaps more remote now than ever before. Kalfus' crafty, nerve-rattling tales are among the most unusual and interesting now being written.

Esquire Ken Kalfus populates this fable and the others in PU-239 and Other Russian Fantasies with the gods and monsters of the decomposing Soviet Union, the luckless who find themselves on the wrong side of every imaginable fence. Mother Russia emerges as Kalfus' most frustrating, sympathetic presence in this thrilling, inventive collection.

Denver Post Kalfus has audaciously taken it upon himself to portray twentieth-century Russia, but not from an outsider's viewpoint. It is a collection filled with epiphanies forged in beautiful language.

The San Diego Union-Tribune When reading Kalfus' work, one is often reminded of Kafka....Reading Kalfus is a refreshingly surprising experience. Stories like "Anzhelika, 13"...and "Orbit"...do a remarkable job of exploring the linkages between personal and historical experience, and they do so in language that is unfailingly meticulous and deft....He's one of the most interesting writers working today.

Pu-239 And Other Russian Fantasies