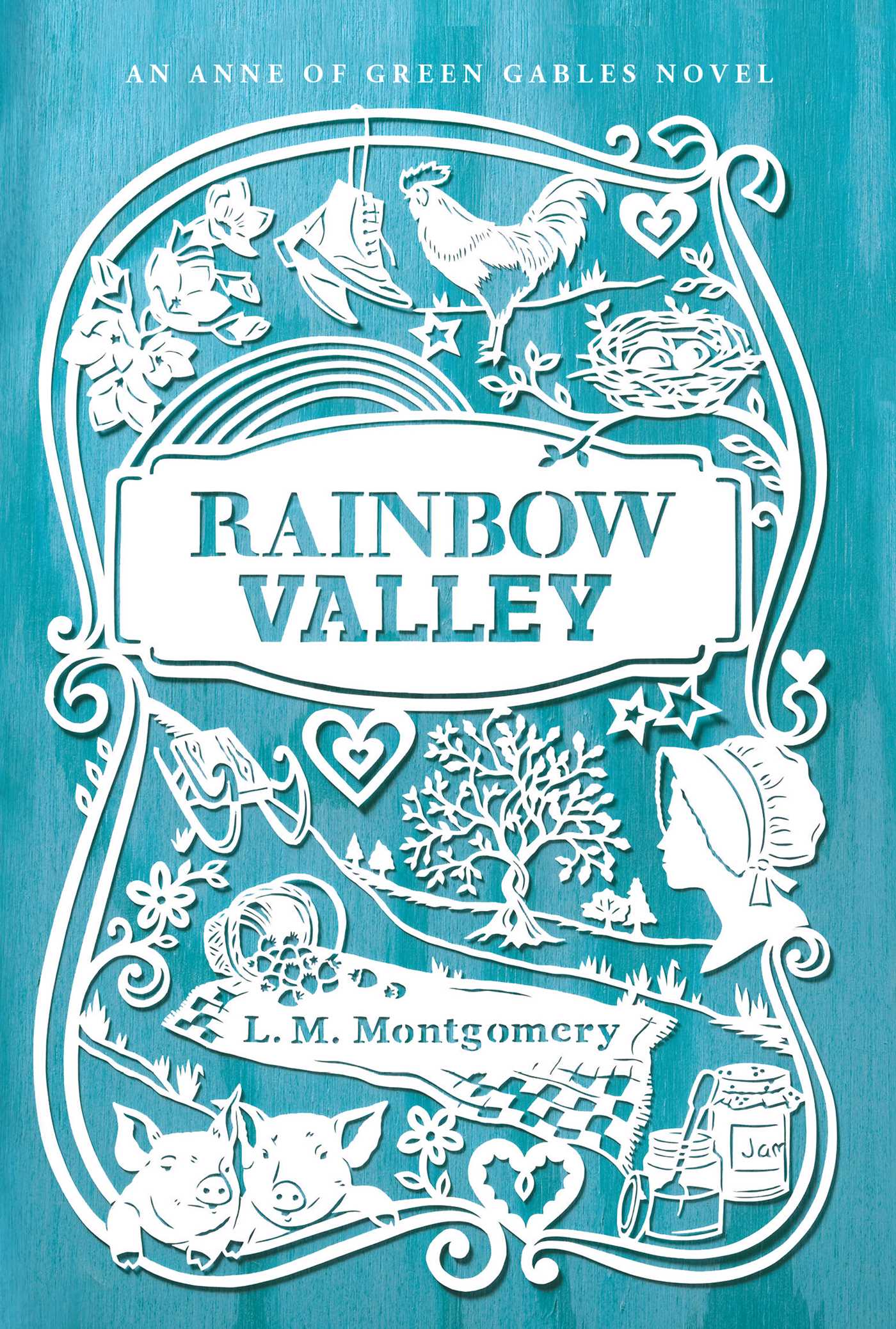 Anne’s family grows ever larger—and ever more joyful—in this artfully packaged edition of the fifth book in the Anne of Green Gables series.

After a holiday in Europe, Anne returns to find that a new minister has arrived in Glen St. Mary. John Meredith is a widower with four young children: Jerry, Faith, Una, and Carl. The children have not been properly brought up since the death of their mother, with only their absent-minded father and their old and partially deaf Aunt Martha to take care of them. Anne instantly takes them under her wing, and they become best friends with her children.

The group goes on many adventures together, but always has the best time in their favorite spot: Rainbow Valley.

This addition to the renowned Anne of Green Gables series makes a wonderful gift and keepsake.

HOME AGAIN
It was a clear, apple-green evening in May, and Four Winds Harbour was mirroring back the clouds of the golden West between its softly dark shores. The sea moaned eerily on the sand-bar, sorrowful even in spring, but a sly, jovial wind came piping down the red harbor road along which Miss Cornelia’s comfortable, matronly figure was making its way towards the village of Glen St. Mary. Miss Cornelia was rightfully Mrs. Marshall Elliott, and had been Mrs. Marshall Elliott for thirteen years, but even yet more people referred to her as Miss Cornelia than as Mrs. Elliott. The old name was dear to her old friends; only one of them contemptuously dropped it. Susan Baker, the gray and grim and faithful handmaiden of the Blythe family at Ingleside, never lost an opportunity of calling her “Mrs. Marshall Elliott,” with the most killing and pointed emphasis, as if to say “You wanted to be Mrs. and Mrs. you shall be with a vengeance as far as I am concerned.”

Miss Cornelia was going up to Ingleside to see Dr. and Mrs. Blythe, who were just home from Europe. They had been away for three months, having left in February to attend a famous medical congress in London; and certain things, which Miss Cornelia was anxious to discuss, had taken place in the Glen during their absence. For one thing, there was a new family in the manse. And such a family! Miss Cornelia shook her head over them several times as she walked briskly along.

Susan Baker and the Anne Shirley of other days saw her coming, as they sat on the big veranda at Ingleside, enjoying the charm of the cat’s light, the sweetness of sleepy robins whistling among the twilit maples, and the dance of a gusty group of daffodils blowing against the old, mellow, red brick wall of the lawn.

Anne was sitting on the steps, her hands clasped over her knee, looking, in the kind dusk, as girlish as a mother of many has any right to be; and the beautiful gray-green eyes, gazing down the harbor road, were as full of unquenchable sparkle and dream as ever. Behind her, in the hammock, Rilla Blythe was curled up, a fat, roly-poly little creature of six years, the youngest of the Ingleside children. She had curly red hair and hazel eyes that were now buttoned up after the funny, wrinkled fashion in which Rilla always went to sleep.

Shirley, “the little brown boy,” as he was known in the family “Who’s Who,” was asleep in Susan’s arms. He was brown-haired, brown-eyed, and brown-skinned, with very rosy cheeks, and he was Susan’s especial love. After his birth Anne had been very ill for a long time, and Susan “mothered” the baby with a passionate tenderness which none of the other children, dear as they were to her, had ever called out. Dr. Blythe had said that but for her he would never have lived.

“I gave him life just as much as you did, Mrs. Dr. dear,” Susan was wont to say. “He is just as much my baby as he is yours.” And, indeed, it was always to Susan that Shirley ran, to be kissed for bumps, and rocked to sleep, and protected from well-deserved spankings. Susan had conscientiously spanked all the other Blythe children when she thought they needed it for their souls’ good, but she would not spank Shirley nor allow his mother to do it. Once, Dr. Blythe had spanked him and Susan had been stormily indignant.

“That man would spank an angel, Mrs. Dr. dear, that he would,” she had declared bitterly; and she would not make the poor doctor a pie for weeks.

She had taken Shirley with her to her brother’s home during his parents’ absence, while all the other children had gone to Avonlea, and she had three blessed months of him all to herself. Nevertheless, Susan was very glad to find herself back at Ingleside, with all her darlings around her again. Ingleside was her world and in it she reigned supreme. Even Anne seldom questioned her decisions, much to the disgust of Mrs. Rachel Lynde of Green Gables, who gloomily told Anne, whenever she visited Four Winds, that she was letting Susan get to be entirely too much of a boss and would live to rue it.

“Here is Cornelia Bryant coming up the harbor road, Mrs. Dr. dear,” said Susan. “She will be coming up to unload three months’ gossip on us.”

“I hope so,” said Anne, hugging her knees. “I’m starving for Glen St. Mary gossip, Susan. I hope Miss Cornelia can tell me everything that has happened while we’ve been away—everything—who has got born, or married, or drunk; who has died, or gone away, or come, or fought, or lost a cow, or found a beau. It’s so delightful to be home again with all the dear Glen folks, and I want to know all about them. Why, I remember wondering, as I walked through Westminster Abbey, which of her two especial beaux Millicent Drew would finally marry. Do you know, Susan, I have a dreadful suspicion that I love gossip.”

“Well, of course, Mrs. Dr. dear,” admitted Susan, “every proper woman likes to hear the news. I am rather interested in Millicent Drew’s case myself. I never had a beau, much less two, and I do not mind now, for being an old maid does not hurt when you get used to it. Millicent’s hair always looks to me as if she had swept it up with a broom. But the men do not seem to mind that.”

“They see only her pretty, piquant, mocking, little face, Susan.”

“That may very well be, Mrs. Dr. dear. The Good Book says that favor is deceitful and beauty is vain, but I should not have minded finding that out for myself, if it had been so ordained. I have no doubt we will all be beautiful when we are angels, but what good will it do us then? Speaking of gossip, however, they do say that poor Mrs. Harrison Miller over harbor tried to hang herself last week.”

“Calm yourself, Mrs. Dr. dear. She did not succeed. But I really do not blame her for trying, for her husband is a terrible man. But she was very foolish to think of hanging herself and leaving the way clear for him to marry some other woman. If I had been in her shoes, Mrs. Dr. dear, I would have gone to work to worry him so that he would try to hang himself instead of me. Not that I hold with people hanging themselves under any circumstances, Mrs. Dr. dear.”

“What is the matter with Harrison Miller, anyway?” said Anne impatiently. “He is always driving some one to extremes.”

“Well, some people call it religion and some call it cussedness, begging your pardon, Mrs. Dr. dear, for using such a word. It seems they cannot make out which it is in Harrison’s case. There are days when he growls at everybody because he thinks he is fore-ordained to eternal punishment. And then there are days when he says he does not care and goes and gets drunk. My own opinion is that he is not sound in his intellect, for none of that branch of the Millers were. His grandfather went out of his mind. He thought he was surrounded by big black spiders. They crawled over him and floated in the air about him. I hope I shall never go insane, Mrs. Dr. dear, and I do not think I will, because it is not a habit of the Bakers. But, if an all-wise Providence should decree it, I hope it will not take the form of big black spiders, for I loathe the animals. As for Mrs. Miller, I do not know whether she really deserves pity or not. There are some who say she just married Harrison to spite Richard Taylor, which seems to me a very peculiar reason for getting married. But then, of course, I am no judge of things matrimonial, Mrs. Dr. dear. And there is Cornelia Bryant at the gate, so I will put this blessed brown baby on his bed and get my knitting.”
L. M. Montgomery

Lucy Maud Montgomery (November 30, 1874–April 24, 1942) publicly known as L.M. Montgomery, was a Canadian author best known for a series of novels beginning with Anne of Green Gables, published in 1908. Anne of Green Gables was an immediate success. The central character, Anne, an orphaned girl, made Montgomery famous in her lifetime and gave her an international following. The first novel was followed by a series of sequels. Montgomery went on to publish twenty novels as well as 500 short stories and poems. Because many of the novels were set on Prince Edward Island, Canada and the Canadian province became literary landmarks. She was awarded Officer of the Order of the British Empire in 1935.

More books in this series: An Anne of Green Gables Novel