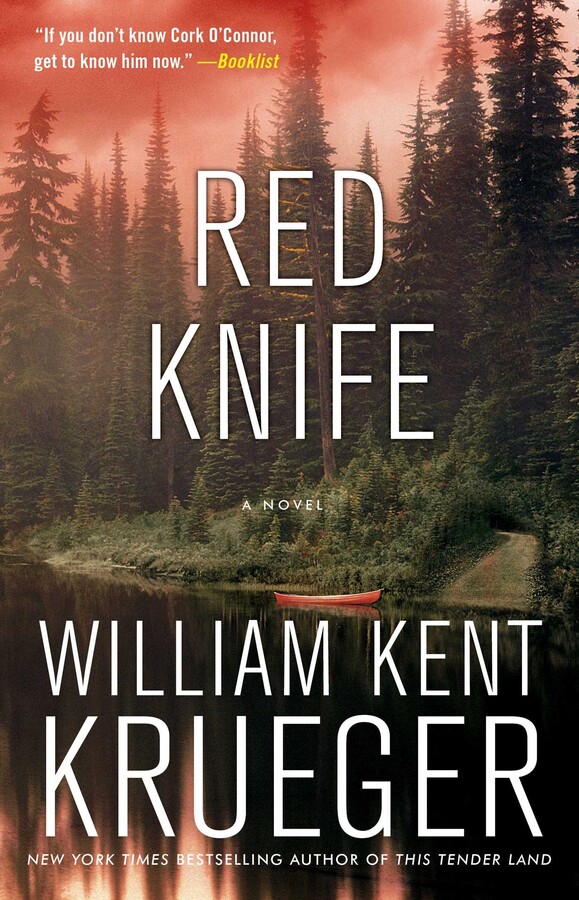 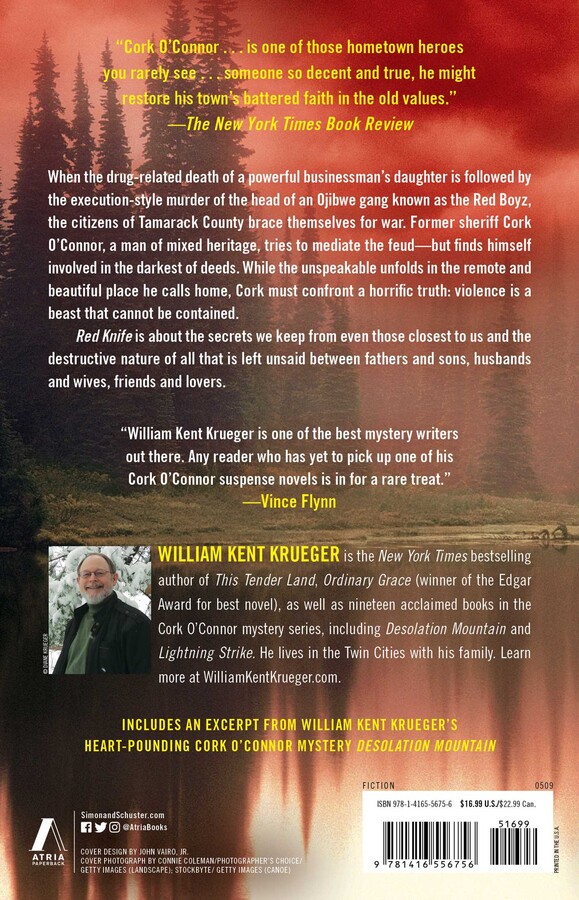 When the daughter of a powerful businessman dies as a result of her meth addiction, her father, strong-willed and brutal Buck Reinhardt, vows revenge. His target is the Red Boyz, a gang of Ojibwe youths accused of supplying the girl’s fatal drug dose. When the head of the Red Boyz and his wife are murdered in a way that suggests execution, the Ojibwe gang mobilizes, and the citizens of Tamarack County brace themselves for war, white against red.

Both sides look to Cork O’Connor, a man of mixed heritage, to uncover the truth behind the murders. A former sheriff, Cork has lived, fought, and nearly died to keep the small-town streets and his family safe from harm. He knows that violence is never a virtue, but he believes that it’s sometimes a necessary response to the evil that men do. Racing to find answers before the bloodshed spreads, Cork himself becomes involved in the darkest of deeds. As the unspeakable unfolds in the remote and beautiful place he calls home, Cork is forced to confront the horrific truth: violence is a beast that cannot be contained.

In Red Knife, Krueger gives his readers a vivid picture of racial conflict in small-town America, as well as a sensitive look at the secrets we keep from even those closest to us and the destructive nature of all that is left unsaid between fathers and sons, husbands and wives, friends and lovers.

The words on the note folded around the check in his wallet read: Here’s $500. A retainer. I need your help. See me today. The note and the money were from Alexander Kingbird, although it was signed Kakaik, which was the name of an Ojibwe war chief. It meant Hawk.

Five hundred dollars was a pretty sound enticement, but Cork O’Connor would have gone for nothing, just to satisfy his curiosity. Although the note didn’t mention Kingbird’s situation, it was easy to read between the lines. In Tamarack County, unless you were stupid or dead you knew that Alexander Kingbird and the Red Boyz were in trouble. How exactly, Cork wondered, did Kingbird think he could help?

Kingbird and his wife, Rayette, lived on the Iron Lake Reservation. Their home was a nice prefab, constructed to look like a log cabin and set back a hundred yards off the road, behind a stand of red pines. A narrow gravel lane cut straight through the trees to the house. As Cork drove up, his headlights swung across a shiny black Silverado parked in front. He knew it belonged to Tom Blessing, Kingbird’s second-in-command. It was Blessing who’d delivered the note that afternoon.

And it was Blessing who opened the door when Cork knocked.

He wasn’t much more than a kid, twenty-one, maybe twenty-two. Long black hair falling freely down his back. Tall, lean, tense. He reminded Cork of a sapling that in the old days might have been used for a rabbit snare: delicately balanced, ready to snap.

Each of the Red Boyz, on joining the gang, took the name of an Ojibwe war chief.

“Let him in.” The order was delivered from behind Blessing, from inside the house.

Blessing stepped back and Cork walked in.

Alexander Kingbird stood on the far side of his living room. “Thank you for coming.”

He was twenty-five, by most standards still a young man, but his eyes weren’t young at all. They were as brown as rich earth and, like earth, they were old. He wore his hair in two long braids tied at the end with strips of rawhide, each hung with an owl feather. A white scar ran from the corner of his right eye to the lobe of his ear. Cork had heard it happened in a knife fight while he was a guest of the California penal system.

Kingbird glanced at Blessing. “You can go.”

Blessing shook his head. “Until this is over, you shouldn’t be alone.”

“Are you planning to shoot me, Mr. O’Connor?”

“I hadn’t thought of it, but I may be the only guy in this county who hasn’t.”

Blessing hesitated. Maybe he was working on an argument; if so, he couldn’t quite put it together. He finally nodded, turned, and left. A minute later, Cork heard the Silverado’s big engine turn over, followed by the sound of the tires on gravel. Everything got quiet then, except for a baby cooing in a back room and the low, loving murmur of a woman in response.

“Mind taking your shoes off?” Kingbird said. “New carpet and Rayette’s kind of particular about keeping it clean.”

“No problem.” Cork slipped his Salomons off and set them beside a pair of Red Wing boots and a pair of women’s Skechers, which were on a mat next to the door.

“You know why you’re here?” he said to Cork.

“Instead of twenty questions, why don’t you just tell me.”

“I’m not responsible for his daughter dying.”

“And you know this how?”

“Popular speculation. And he’s one of the Red Boyz.”

“I want to talk to Reinhardt.”

Kingbird sat tall. He wore a green T-shirt, military issue it looked like. On his forearm was a tattoo. A bulldog—the Marine Corps devil dog—with USMC below.

“I have a daughter of my own,” he said. His eyes moved a hair to the right, in the direction from which the cooing had come. “I understand how he feels.”

“I don’t think you do. Your daughter is still alive.”

“My daughter will also never use drugs.”

“Reinhardt and some of his men threatened one of my Red Boyz yesterday. He needs to understand that anything he does—to me or any of the Red Boyz—will be answered in kind. I’ve seen wars, O’Connor. It’s easier to stop them before they get started.”

“Then give him what he wants. Give him the man responsible for his daughter’s death. Give him Lonnie Thunder.”

The suggestion seemed to have no effect on Kingbird. “Will you arrange a meeting?”

“Because you’re not just another white man. You’ve got some Ojibwe blood in your veins. Also, you used to be sheriff around here and I figure that gives you a certain standing. And—” he held up a card, one of the business cards Cork routinely tacked to bulletin boards around Aurora “—it’s how you earn your living.”

“How do I know, and how can Buck be sure, that you won’t just shoot him as soon as he shows up?”

“Let him name the place and the time. You’ll be there to observe and to maintain the peace.”

“Five hundred dollars isn’t nearly enough to get me to step between blazing guns.”

“I’ll be unarmed. You make sure Reinhardt is, too. And the five hundred dollars is a retainer. When this meeting is done, you’ll have another five hundred.”

Rayette Kingbird strolled into the room carrying her child. Misty had been born six months earlier. When Alexander Kingbird looked at his wife and his daughter, his face softened.

She smiled. She was full-blood Ojibwe. Her life before Kingbird had been hard. Abandoned by her mother and raised by her grandparents, she’d been into every kind of trouble imaginable. When Cork was sheriff of Tamarack County, he’d picked her up a few times, juvenile offenses. She’d skipped childhood through no fault of her own and he’d thought that any youth she might have had had been squeezed out long ago. Then she met Kingbird and married him and things changed. She looked young and she looked happy.

“Past bedtime,” she said. “She wants a kiss from her daddy.”

Rayette held the baby out and Kingbird took his daughter. He nuzzled her neck. She gurgled. He kissed her forehead. She squirmed. “Night, little turtle,” he said. He handed her back to his wife.

Rayette left with the child. Kingbird looked after them a moment, then turned to Cork.

“Nice sentiment, Alex, but what are you going to offer Buck? What do I tell him that will make him agree to meet you?”

He ignored the fact that Cork had used his given name, not the one he’d taken as a member of the Red Boyz. He said, “Tell him he will have justice. Tell him I give my word.”

William Kent Krueger is the New York Times bestselling author of This Tender Land, Ordinary Grace (winner of the Edgar Award for best novel), as well as eighteen acclaimed books in the Cork O’Connor mystery series, including Desolation Mountain and Sulfur Springs. He lives in the Twin Cities with his family. Learn more at WilliamKentKrueger.com.

"If you don't know Cork O'Connor, get to know him now." -- Booklist

"Cork O'Connor...is one of those hometown heroes you rarely see...someone so decent and true, he might restore his town's battered faith in the old values." -- The New York Times Book Review

"William Kent Krueger is one of the best mystery writers out there. Any reader who has yet to pick up one of his Cork O'Connor suspense novels is in for a rare treat." -- Vince Flynn