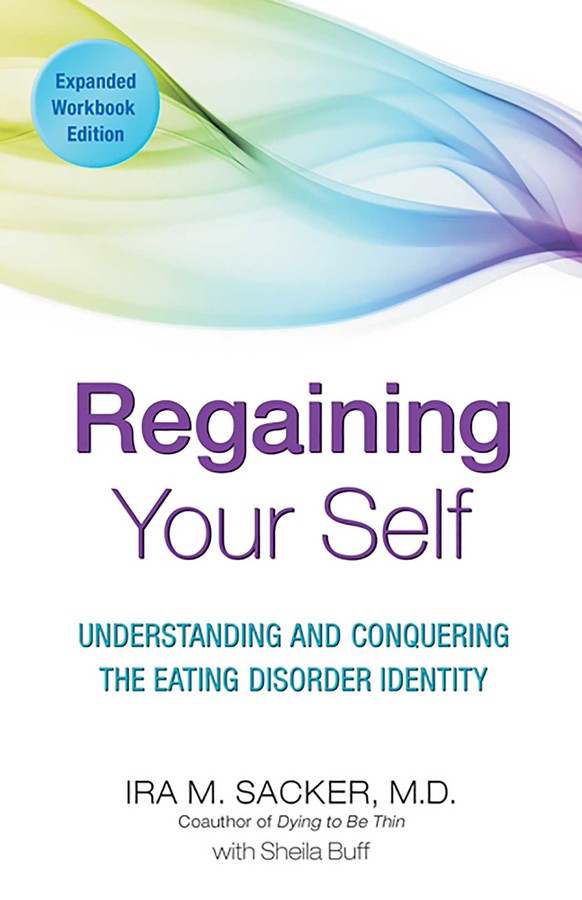 You are not what you don't eat.

Never has there been a mental disorder so controversial in the theories surrounding its causes, treatments, and recovery than that of the eating disorder. Its mysterious nature, onset, and lack of predictability make this an elusive epidemic that causes frustration and fear in those who are afflicted and those who love and treat them. This is exactly why patients, families, and treatment professionals need to be privy to the observations of one of the foremost eating disorder specialists in the world and bestselling author of Dying to Be Thin, Ira M. Sacker, M.D. It is he who continues to be at the forefront of true treatment breakthroughs, the latest of which is evidenced in his latest book Regaining Your Self.

Over the last several decades, as theories and books circulated and speculated on whether it is perfectionism, trauma, genetics/biology, or social pressures of the media that has caused the rapid spread of anorexia, bulimia, and related disorders, Dr. Sacker was busy making a breakthrough in identifying the true culprit in eating disorders—The Eating Disorder Identity.

With Eating Disorder Identities victims attach to their disorder and view it as part of who they are, ultimately coming to identify with that persona exclusively. (Sometimes individuals will even name the disease "Ana," "Mia," or "Ed," in order to personify the new identity.) Just as a musician cannot live without his instruments, an eating disorder individual will feel inauthentic and lost if ever they give up their eating disorder, contributing to a higher rate of relapse.

In Regaining Your Self, Dr. Sacker explains the phenomenon of the Eating Disorder Identity and describes why this is the least identified concept in traditional treatment methods, yet most detrimental aspect of the disorder. Further, Sacker explains how in an attempt to substitute their former identity, many eating disorder patients adopt their eating disorder as a more acceptable definition of who they are; therefore blurring the lines between their disorder and their self. Like any thing that is viewed as intrinsic, the eating disorder becomes nearly impossible to cut off and turn away from.

To combat this crisis, Sacker lays out his effective program called PIRT or Personal Interaction Rational Therapy, which assists families, clinicians, medical doctors, and therapists in identifying the issue of identity (the lack of one, the disdain for the one they have) exhibited by patients and offers them techniques on replacing the eating disorder identity with a new and healthier one—the major component in facilitating recovery. In addition, Dr. Sacker created a brand-new workbook section exclusively for this paperback edition, which offers both interactive and introspective exercises to help treatment professionals and patients successfully execute the bold new approach of Regaining Your Self.

"I wish there had been a book like this when I was sick. Dr. Sacker truly understands this complex disorder."

– –Tracey Gold, actress and author of Room to Grow: An Appetite for Life

"Regaining Your Self offers a logical approach to understanding eating disorders. The emphasis on deficits in identify and trust will open doors for therapists who treat anorexia, as well as make constructive demands on them. Above all, Regaining Your Self will remind us that psychotherapy must have a personal element to succeed."

– –Steven Levenkron, M.S., author of The Best Little Girl in the World and Anatomy of Anorexia

"Dr. Ira Sacker is an innovator in his treatment approach. His in-depth and heartfelt understanding of the minds and souls of people struggling with eating disorders is a breath of fresh air. This book will serve as an invaluable tool for those who work with eating disorders and body image issues."

– –Jessica Weiner, author of A Very Hungry Girl and Do I Look Fat in This?