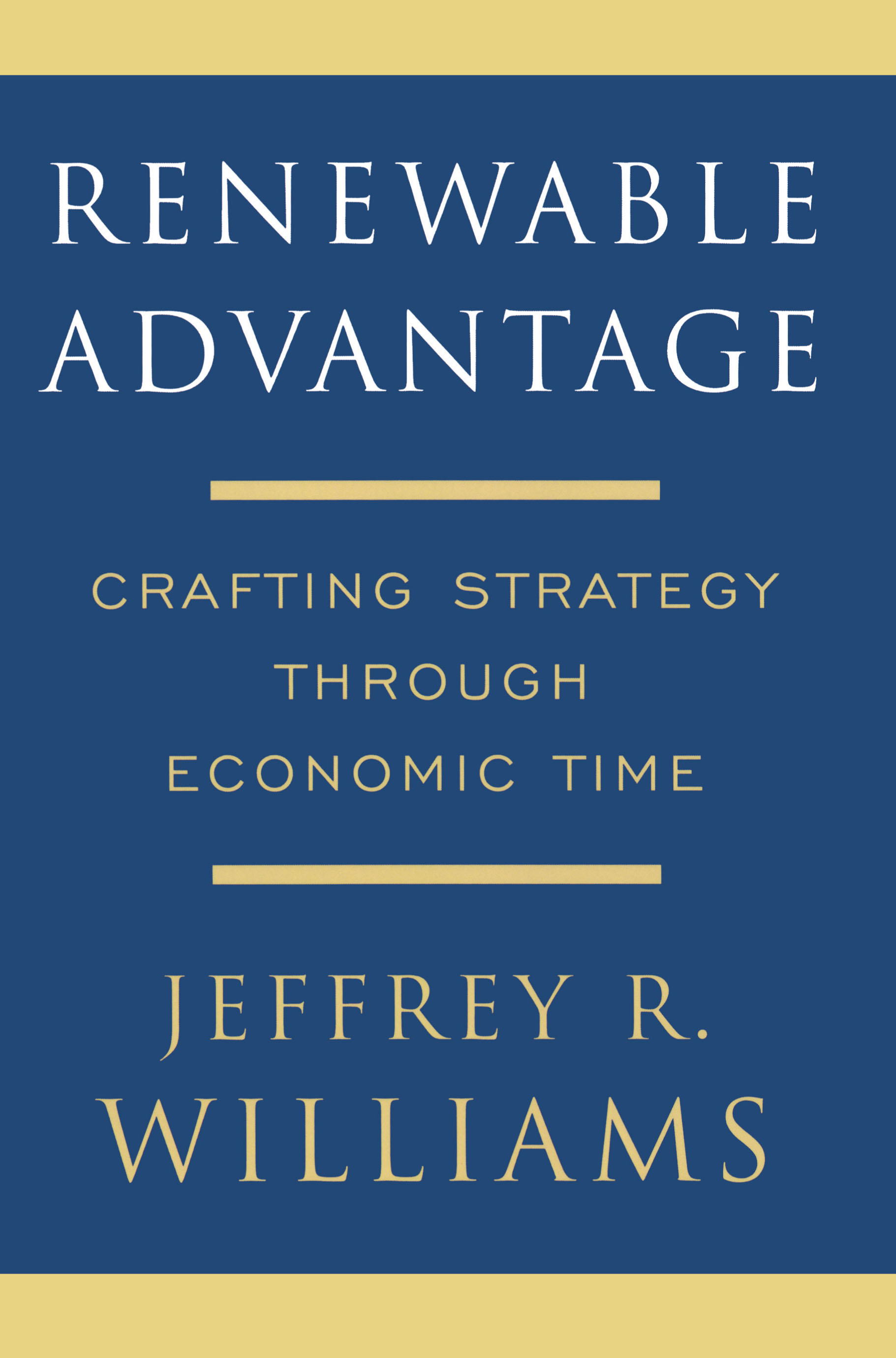 The task of continuously renewing a company is the greatest challenge confronting any chief executive. To enable managers to project renewal strategies likely to win in the future, Jeffrey Williams has constructed a dynamic road map of outcomes in what he calls "economic time," based on a ten-year study of growth, decline, and renewal patterns of hundreds of companies in forty-five industries. In this superbly readable book, Williams's revolutionary, award-winning concept of slow-, standard-, and fast-cycle economic time provides a unifying business language that the multicycle manager can use to compare the renewal opportunities of widely diverse products, companies, and markets.
Using examples and studies from companies such as Starbucks, McDonald's, UPS, Compaq, Sony, Merck, Disney, Toyota, IKEA, Microsoft, Sony, Intel, IBM, Johnson & Johnson, Chrysler, and Hewlett-Packard, Williams explains that the key idea in economic time is being able to manage products and organizations according to the speed and means by which economic value arises, decays, and is renewed. The drivers of economic time are isolating mechanisms -- a firm's unique capabilities that lie at the heart of its competitive advantage -- and that, in Williams's framework, "delay" product obsolescence. Building on his intuitively appealing model, Williams describes how his three laws of renewal -- convergence, alignment, and renewal -- provide guidelines by which managers can gain command over strategy in complex, dynamic competitive situations.
Renewable Advantage is not only essential reading but also will become a standard reference for senior and division managers, business scientists and strategists, and general managers in all industries.

CHAPTER 1: THE ADVENT OF ECONOMIC TIME
The central idea of this book is economic time.
When we think of the effects of time on a business, we imagine that markets are speeding up and that advantage is short-lived. But business time is becoming more complex than that. Time is not what you think.
The significance of time in business goes beyond the reality that markets and companies are moving faster. There is a more interesting force at work. Business time is not only speeding up -- business time is splitting markets apart, as well as the companies that compete in them.
Do we really think dynamically? Most of us don't. We are conditioned from birth to regard change with caution, even as we grow and explore the world around us. When we ask managers whether they think dynamically, we hear answers that range from a confident "of course we do!" to a perplexed "what do you mean?" Ask yourself these basic questions:

Answers to questions like these help to uncover the leverage points in a business problem, where concentrated efforts lead to high payoffs. Economic time sets a balance in thinking about long term and short term. The main operating sequences, your company's central, value-added processes, are accented and compared to the short-term activities that consume your day-to-day energy. Thinking in terms of economic time puts the focus on the deeper patterns of behavior, the underlying forces central to organizational regeneration.
To understand what their companies can do, we encourage managers first to understand their company's growth history in terms of economic time. Look at how your company's growth engine has operated in the past. Confirm how you are similar or different from your competitors in terms of how you replicate your advantage. Distinguish a history of continuous change from framebreaking change.
Emulating the practices of another company, or adopting a new strategy without a grounding in economic time, can be like starting a game without being certain that you know what the rules are, whether the game is changing, or whether your company is likely to be good at it. In one Fortune 10 company that we worked with, this danger became apparent. On the surface of it, the problem was that company managers needed to understand the challenges brought on by the faster-moving markets into which their product was headed. But as discussions unfolded, a deeper problem surfaced. Company officers did not know how economic time had operated for them in the past.
As we discovered, hidden growth barriers were present deep within the company that would have remained undetected well into the process of commitment to the new strategy. A barrier to growth in economic time within the company's information systems could have driven the enterprise into bankruptcy. Eventually, it became clear that managers needed to reset their cultural clocks to a new management style. Before decisions could be made on what direction to take, managers needed to think through what kind of company they wanted to be.
Ask yourself: Do you think of your advantage as merely sustainable -- or as dynamically renewable?
There are few free rides in economic time, few tricks or one-shot tactical maneuvers to create advantage. What you get is a dynamic road map among the outcomes that may be possible and indicators of which styles of management may be best for you. As the research illustrates, managing through economic time opens up new ways to get from here to there. Still, the question you will be left with is, "What kind of a company do I want to be?"
The ancient Greeks had a way of putting it: "I can only discover what I am when I know what is unlike me. When I look to what is fundamentally different from me, then I know who I am." We have found that a useful place to start your journey is economic time is to look at companies that were brought into being in traditional markets. These familiar markets and the companies that define them provide an important starting point. Through them we see how traditional markets are changing, what new opportunities their managers face, and how you can begin to ask yourself where you want to operate in economic time.

By clicking 'Sign me up' I acknowledge that I have read and agree to the privacy policy and terms of use. Free ebook offer available to NEW CA subscribers only. Offer redeemable at Simon & Schuster's ebook fulfillment partner. Must redeem within 90 days. See full terms and conditions and this month's choices.
Discussion Group Questions
1. How stable is your business model? How is it changing? To what extent do your managers practice renewal-based thinking as a normal part of your day-to-day operations?
2. Is your advantage renewable-or merely sustainable? Are you facing growth barriers that are hidden from your managers?
3. Do managers in your scale-driven businesses understand how to orchestrate product design, process improvements and organizational learning alongside scale-that size for the sake of size is no longer enough?
4. Are you approaching "winner-take-all" outcomes in your software-related businesses? What is the likelihood for "market tipping" towards a single, dominant product? Are opportunities available to create shielded, long-lived profits through staircase strategies?
5. Are your faster-moving businesses nearing fast-cycle status, where product half-life is as short as 12 months? Does everyone in your organization understand the depth of change needed to become "children eaters?"
6. How, specifically, are your critical success factors changing? Which previously critical factors have decayed to the point where they are still needed but no longer the basis of superior profitability? Are your managers prepared to take advantage these increasingly diverse market capitalization opportunities?
7. Which of your businesses are facing "high energy markets?" where a radical change in profitability for all competitors is likely occur in the future? How extensive are measures in place to provide early warning of needed changes to your business model?
8. Where do your senior managers spend most of their time in strategic thinking? How many operate in the "70% zone," where business value is renewed through purposeful recapitalization of aging businesses?
9. Chapter 10 outlines seven steps to renewable leadership. How many of these are practiced in your company?
Jeffrey Williams