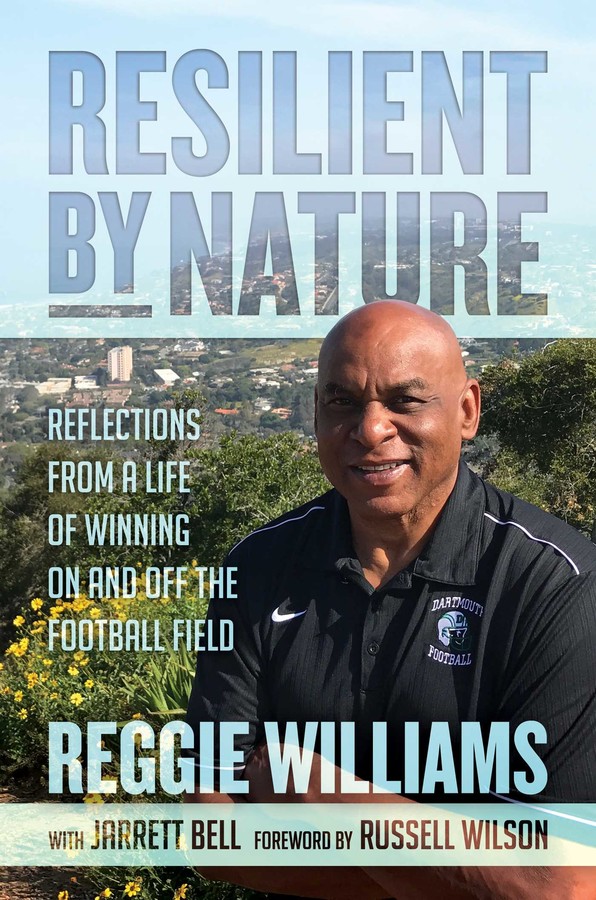 This amazing memoir follows the story of Reggie Williams—ex-NFL linebacker, former Disney executive, renaissance man, and the epitome of determination in the face of extreme challenges.

In so many ways, Reggie Williams has had the type of life that people dream of: he starred as an athlete, excelled with an Ivy League education, built a sports empire as part of an iconic corporate brand, achieved global impact as a public servant, and won major honors for his community work. Along the way, Williams glowed on the biggest stages alongside celebrities, business leaders, and social icons.

Yet Williams’s life has also presented a nightmare—and a determined mission to score another victory—with the battle to save his right leg from amputation. The residual effects of a fourteen-year career as an NFL linebacker has challenged Williams—who has undergone twenty-eight surgeries for football injuries, including multiple knee replacement operations—to draw on the resilience that has been at the foundation of his rise from the beginning.

In Resilient by Nature, Williams provides an intimate account of his remarkable journey while also sharing his unique perspectives on a wide variety of issues

Reggie Williams, a native of Flint, MI., had a remarkable career in sports first at Dartmouth College and later for the Cincinnati Bengals. At Dartmouth, Williams was a three-time all-Ivy League linebacker in football and also an Ivy League heavyweight wrestling champion. Reggie played 14 seasons (1976-1989) at linebacker in the National Football League, all with the Cincinnati Bengals, and appeared in two Super Bowls - XVI (1982) and XXIII (1989). During his playing career, Reggie received numerous honors, including selection to the NFL All-Rookie Team (1976), the Byron "Whizzer" White Award for Humanitarian Service (1985), the NFL Man of the Year (1986), Reggie was appointed to an open seat on the Cincinnati City Council in 1988 and was re-elected for a second term in 1989. After retiring from the NFL, Reggie joined the World League of American Football as the Vice President/General Manager of the New Jersey Knights. He later rejoined the National Football League where he conceived and opened the NFL's first Youth Education Town (YET) in Los Angeles. In April 1993, Reggie became the Director of Sports Development for Walt Disney World Resort. He oversaw the creation of Disney's Wide World of Sports Complex, a state-of-the-art 220-acre multi-sport facility, and championed the effort to grow Disney's involvement in sports. In 1998, he was named Vice President of Disney Sports Attractions, overseeing a newly created Sports & Recreation division. Under Reggie's leadership, Disney's sports business thrived, generating increased revenue and attendance across virtually all sports properties at Disney's Wide World of Sports Complex, the No. 1 sports venue for amateur and professional sports in the nation. Reggie currently lives in Sarasota, Fl.

NFL columnist Jarrett Bell has covered pro football for USA Today sports since 1993. Since 1997, Bell has been a member of the selection committee for the Pro Football Hall of Fame. He was also part of the blue ribbon panel that chose the NFL’s 100-year anniversary team. Previously, he also served as a contributor at ESPN for four years (2013–2017), primarily featured as a panelist on NFL Insiders and SportsCenter. A father of two, he resides in Northern Virginia. In addition to winning dozens of in-house awards for USA Today, he has received multiple writing awards from the Pro Football Writers of America. He has been a member of the Pro Football Hall of Fame selection committee since 1997, and since that year, has also served on the media panel that selects the Super Bowl MVP. He also serves on the Alumni Advisory Board for the College of Communication Arts and Sciences at Michigan State University. Among hundreds of radio and TV interviews, he has appeared on programming for CBS (Face The Nation), CNBC, ESPN, CNN, NFL Films, The NFL Network, Fox Sports, MSNBC, Headline News, Comcast, ESPN Radio, NBC Sports Radio, ABC Radio, Rogers Sportsnet, Sirius Satellite Radio, Pro Football Talk, and WUSA-TV. He was featured in documentaries, The Forgotten Four and Minister of Defense: The Reggie White Story. He also had a cameo role in the feature film, Invincible. Bell, fifty-nine, previously covered the San Francisco 49ers for the Gannett-owned Marin (County) Independent Journal (1990–1992) and was editor of The Dallas Cowboys Weekly (1989). He began a nine-year association with the Cowboys in 1981, a few weeks after graduating from Michigan State University with a bachelor's degree in Human Communication. After four years as a contributing writer for the team-owned Cowboys Weekly, he joined the staff full-time in 1985. He also served as sports director for Fort Worth-based KNOK-FM (1984–1985) and covered high school sports as a staff writer for The Dallas Times Herald (1981–1983). In college, he worked as a student assistant in the Michigan State University Sports Information Office, a news reporter for WVIC-AM and as a teaching assistant for the Department of Communication. He also studied abroad at The University of London during the summer of 1979, participating in The Guardian’s Contemporary Mass Media program. A Detroit native, he began in sports as a teenager at Olympia Stadium, working as an equipment manager for the Detroit Jr. Wings and as an aide in the PR Department for the NHL's Detroit Red Wings.

"During all the years we played together, I was so impressed with Reggie's work ethic and dedication to being the best at whatever he did. He was all out. I'm also not surprised that he has fought challenges after football with everything he has. You hate to see him go through it, but if anyone can endure the type of obstacles and adversity he's faced, he's the one."

"Reggie Williams epitomizes the Renaissance Man. Intellectual. Athletically gifted. Passionate. Competitive. He raised the bar for everyone around him on the field and in the classroom. He made Dartmouth a better place, which is why we have a leadership award named in his honor. He is the best that we present and develop. It is no wonder he's had impact in every endeavor he's taken over the course of his life."

"I have a huge amount of respect for Reggie. He never gives up. His ethics, honesty , and penchant for doing the right thing always impressed me. I never worried about him telling me what he thought. Kind of like my wife. I trust him."

"Reggie has been a trailblazer his whole life. Just an amazing leader. He would have been an out-of-the-box choice for the NFL, but with his business skills and savvy, I saw him as the ideal person to become the first African-American commissioner in professional sports."

– Richard Lapchick, founder of the Center for the Study of Sport in Society

"Reggie was always more than just a 'football star,' evident by serving on the Cincinnati City Council during his NFL career. He was true to who he was: the antithesis of every stereotype about a jock. Then again, how many NFL players are there from Dartmouth?"

"He is one of the most astute and courageous sports personalities ever. His story is worth reading because it provides an architecture for success by persistence, hard work, and study. At different points in his life he faced discouragement, yet never let anything stand in his way. He has revealed to us all a certain genius."

"There are not many people who will positively impact your life just by knowing them as Reggie does. One thing I love about him: he's not someone who climbed over people to advance. He brought people along with him."