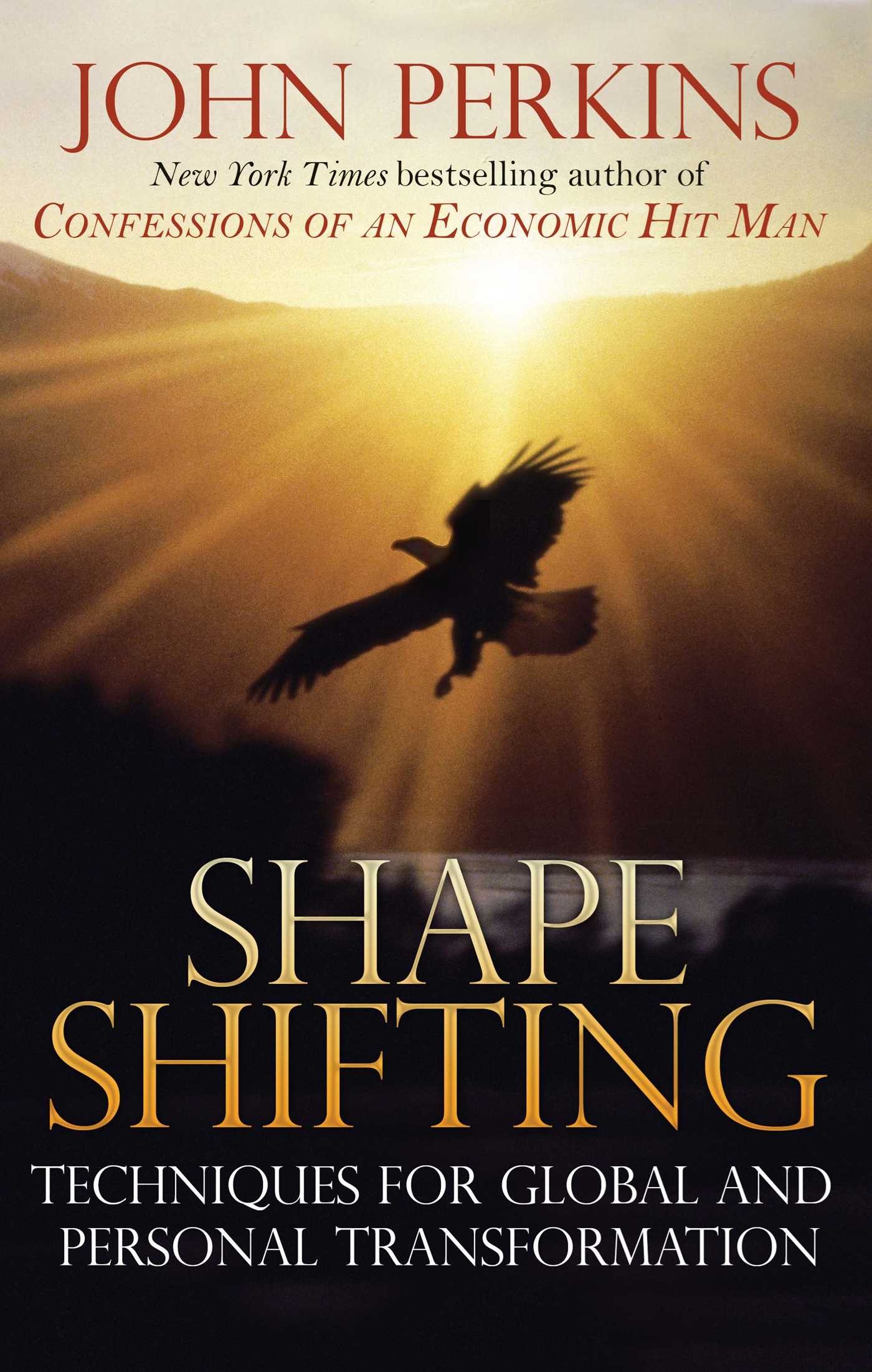 Techniques for Global and Personal Transformation

The New York Times bestseller Confessions of an Economic Hit Man documents John Perkins’ extraordinary career as a globe-trotting economic hit man. Perkins’ insider’s view leads him to crisis of conscience--to the realization that he must devote himself to work which will foster a world-wide awareness of the sanctity of indigenous peoples, their cultures, and their environments. Perkins’ books demonstrate how the age-old shamanic techniques of some of the world’s most primitive peoples have sparked a revolution in modern concepts about healing, the subconscious, and the powers each of us has to alter individual and communal reality.

Many indigenous cultures practice shapeshifting. Native American hunters take on the spirit of their prey to ensure a successful hunt; Asian medicine men “ingest” a sickness to heal the one afflicted; Amazon warriors become jaguars to soundlessly travel the jungle. Those who shapeshift understand that all of life is energy and that by focusing your intent you can change energetic patterns, rendering a new form. Shapeshifting can occur on three levels: cellular--transforming from human to plant or animal; personal--becoming a new self or leaving an addiction behind; and institutional--creating a new business or cultural identity.

Since 1968, master shamans in Africa, Asia, the Middle East, and the Americas have been training John Perkins to teach the industrial world about the powerful techniques involved in shapeshifting. His groundbreaking book takes you to deserts and jungles, mountains and oceans, medical research centers and corporate board rooms to learn the step-by-step methods of this practice that integrates ancient and modern techniques to bring about profound healing.

I stood back and observed him: a gringo in a gray pinstriped suit standing stiff as a fountain pen, staring out at the muddy place where the plane was supposed to land.

Mud covered his black shoes and there were blotches of it caked to his trousers. His hair was cropped short and he was clean-shaven. His arms were folded tightly across his chest; he stared straight into the rainforest on the other side of the airstrip. Lounging at the edge of the jungle, was a Shuar family: a man and woman and three tiny children, the youngest nestled against the woman’s breast.

He did not move as I approached. “Good morning,” I said in English.

He spun around as though he had been shot. Then, seeing me, his face lit up in a smile. “Good morning indeed! You speak English. How wonderful! My name is Knut Thorsen.” By his slight accent, I thought him Scandinavian.

“A Peace Corps volunteer. How remarkable! Have you lived here long?”

I explained that I had been stationed in Ecuador for four months. And added, “But not here. I live further in.”

“Further into the jungle?” He shook his head in disbelief. “With the Shuar?”

“Is it true? Are they really headhunters?”

I assured him that the Shuar still shrunk the heads of enemies on occassion, but that customs were changing rapidly. Unable to contain my own curiosity, I blurted out, “What brings a man in a pinstriped suit to Sucua?”

He looked sheepishly at his jacket and trousers. “Why am I here? Well, I work for a consulting firm that does feasibility studies for the World Bank. I’ve been looking at a potential hydroelectric site on the Paute River.”

“Yes. It’s not too close to here I know, but the same drainage basin. So--a justifiable trip for my expense account. Besides,” he smiled, “I wanted to visit an Amazon town, a frontier outpost. I wanted to see Shuar.” He nodded in the direction of the family at the edge of the jungle.

He glanced toward the airstrip, a worried expression crossing his face. “Isn’t the plane due to arrive any moment now?”

“In Cuenca they said it was a daily flight.”

“Of course. Better late than not at all.” With that he turned and led us back to one of the tables. For the next two hours we talked about ourselves, our backgrounds, and our jobs. He was Norwegian. He had moved to the United States shortly after World War II to attend MIT, where he received degrees in engineering and business administration. He joined a prestigious Boston-based consulting firm, became a partner, and was now senior vice president.

“Despite all the good things in my life,” he admitted, “I’d trade places with you in a heartbeat.”

“You’re young, coming of age in a fascinating world where change will happen rapidly. The survival of our species may well depend on the decisions made by you and your contemporaries.” His eyes wandered around the lean-to, out to the airstrip, and back to me. “You personally have the rare opportunity to learn from cultures like the Shuar.”

This struck me as odd. My Peace Corps teachers had always spoken of what we could teach the Shuar, not the other way around. Before I could ask him to explain, a shout went up.

His face lit up. Then, like everyone else in the lean-to, he concentrated on listening. After a moment he leaned toward me. “I hear nothing,” he whispered.

“The Shuar always hear the plane long before the rest of us.”

“Amazing,” he said. “I wonder what the medical doctors have to say about that. What happens if the clouds close in?”

“Once the plane lands, it must leave. The pilot’s better off taking his chances with storms and mountains than disappointing these farmers.”

There was little we could do. We simply waited and watched. Then I remembered his comment. I turned to him. “A while ago you said something about learning from the Shuar. That I had a rare opportunity. What did you mean by that?”

He thought for a moment, his intensely blue eyes holding mine. “Our world is changing like never before. We in our culture, we industrial people, are doing some very strange things.” He turned to look at me. “I’m an engineer, here to build a hydroelectric plant. But even I can see that the rest of the world cannot afford to follow our example. How many rivers can we dam? How many cars can we manufacture? How many forests can we cut and pave over with highways? How many people can live in houses like mine? It’s foolish to believe this can go on forever. Our way of life is irrational and unsustainable. Young people like you are the hope. Yet you cannot learn from our universities--they’re tied to the ideas of the past. You must look elsewhere. To people like the Shuar.”

His words caught me off guard. I was certain that Congress was not paying me to become educated by headshrinkers.

“It won’t be easy,” he continued. “Ever hear about men who change shape, use mystical techniques to turn themselves into trees or animals? The shapeshifters . . . Ask your Shuar friends to teach you. Techniques like that may offer the only hope for changing your--our--culture.”

A man rushed up to us. “Senores, get your luggage. Time to leave! Vamos rapidito.”

We hurried to the plane. As we buckled ourselves in, he reached across the space between our seats and touched my arm. “The corporate world is not an easy one to change. No point in combating it head on.”
John Perkins

John Perkins has traveled and worked with South American indigenous peoples since 1968. He currently arranges expeditions into the Amazon and has developed the POLE (Pollution Offset Lease on Earth) program with the Shuar and Achuar peoples as a means of preserving their culture against the onslaught of modern civilization. He is also the author of The Stress-Free Habit, Psychonavigation, Shapeshifting, and The World Is As You Dream It.

"John's wonderful storytelling creates a journey so captivating it shifted me beyond time and space--a compelling book for anyone."

"Only a handful of visionaries have recognized that indigenous wisdom can aid the transition to a sustainable world. John Perkins' wonderful story of life among the shamans brings great insight for an industrial civilization consuming and polluting itself toward catastrophe."

– Edgar Mitchell, ScD., Apollo astronaut, founder of the Institute of Noetic Sciences, and author of R

"Shapeshifting is an engaging saga of one individual's transformation from global businessman to on-the-ground conservationist and healer."

"John Perkins eloquently portrays how changing our dream can propel us into shapeshifting not only ourselves but also the reality of the world around us. Perkins is a bridge."

“His groundbreaking book takes you to deserts and jungles, mountains and oceans, medical research centers and corporate board rooms to learn the step-by-step methods of this practice that integrates ancient and modern techniques to bring about profound healing.”

Techniques for Global and Personal Transformation